Speech by Vladimir Putin at the anniversary UNGA

28 September 2015
296
The “isolated” president of Russia, Vladimir Putin, appeared for the fourth time within the walls of the UN, and even the preparation for this speech, which is noted even by Western media, aroused unprecedented interest among viewers (listeners, users). 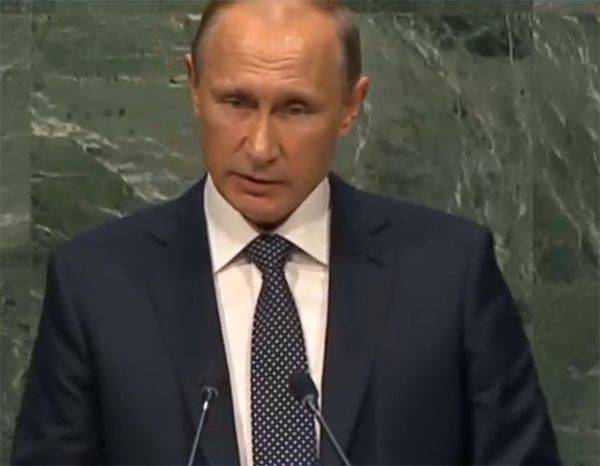 Vladimir Putin noted that in 1945, the countries that defeated Nazism laid down the principles of the new world order. And the Yalta system, according to the president, was truly suffered, paid for with the lives of tens of millions of people.

The Russian leader noted that today the UN has not and cannot have an alternative, although some states are trying to do everything to shatter the organization and, above all, the UN Security Council.

Vladimir Putin:
The UN is a structure that has no equal in terms of legitimacy or representation. There has always been disagreement in the UN, and the veto has always been used. And it’s quite natural for such a diverse organization. The strength of the UN is in taking into account different opinions and points of view.

Putin is about criticizing the UN and wanting to make decisions to bypass the organization:
If they are so strong and exceptional, they think they know what to do. The UN only bothers them, as they say, it gets confused underfoot. Like, the organization is outdated, has already fulfilled its historical mission and cannot continue to carry out international functions. This is not true. Yes, the world is changing, the UN must be transformed, but we consider attempts to undermine the UN to be extremely dangerous, because then we will have no rules but a strong right. Everything will converge to the principle of more dictatorship - less equality. The number of protectorates controlled from outside the territories will increase.
Then the Russian president touched upon the topic of interpreting the question of the legitimacy of state power:
You can not play and manipulate words. Each term must have uniformly understood criteria. No one is obliged to adapt to a single model, which is considered to be the only one by someone. The export of social experiments often led not to progress, but to degradation. Export revolutions, which now someone calls democratic, continues.

Vladimir Putin switched to the topic of events in the Middle East and North Africa. According to the President of the Russian Federation, people in this region wanted a change. But in the end they were expected by the invasion of external forces, which took advantage of the situation and led Syria, Iraq, Libya to total violence, poverty, and social catastrophe.

The words of Vladimir Putin:
Human rights are no longer put into anything. I want to appeal to those who brought the situation to this: do you at least understand what you have done ?! This led to the formation of anarchy zones filled by extremists and terrorists, including ISIS. But after all, ISIS did not arise out of nowhere. Many militants are former Iraqi military personnel who were literally thrown out of service after the overthrow of Saddam Hussein. And also - Libyans, residents of the country where the coup d'etat took place, recruited ISIL. In addition, they are members of the so-called Syrian opposition - they are armed, trained, then they are transferred to ISIS. Terrorist organization emerged as a weapon against undesirable regimes. It aims to dominate the Islamic world and beyond.

Vladimir Putin made it clear that he is well aware of the funding channels for militants. According to him, today many are trying to shut their eyes to the channels of support for international terrorism: drug trafficking, weapons, illegal oil supplies.

We cannot simultaneously declare our readiness to fight terrorism and close our eyes to its financing. Or those who believe that they can, are going to put the terrorists under their control, and then eliminate them?

The President of the Russian Federation noted that the militants are a great evil, but the leaders of terrorists cannot be considered exclusively fools. Putin, addressing those who clearly do not even breathe for international terrorism, said:

Dear, they are not more stupid than you. It is not known yet who is using whom for their own purposes, and the transfer of weapons to terrorists by those prepared (by the USA) is the best confirmation of this.

Vladimir Putin:
In the camps of the IG, militants from Europe are being run-in, and, unfortunately, it must be recognized, from Russia. It is impossible for the thugs to return home and continue their dirty deed. We provide military assistance to Iraq, Syria. We consider the refusal to support the Syrian government forces Assad to be erroneous, since, apart from them and the Kurdish militias, no one in Syria fights against the IS.

We are often tried to blame for growing ambitions, as if those who say so have no ambitions at all.

Further, Vladimir Putin called for joint efforts to combat international terrorism. He urged to consider the relevant resolution, comparing a possible anti-terrorist coalition with the anti-Hitler.

According to Putin, Muslim countries should play a leading role in such a coalition, since ISIS not only carries a threat to peace, but also distorts Islam.

Vladimir Putin also spoke of the numerous refugees who are now overwhelming Europe, fleeing war. According to the President of Russia, if you restore statehood where it is actually destroyed today (in Syria, Libya, Iraq), you will not have to think about where and when to build new camps for refugees in Europe.

Putin:
We need to help those people who, despite the war, have not left their seats. But we must not impose our will, but act within the framework of international law.

The President of Russia and his smooth transition to Ukrainian topics:
It is extremely important: to help the state structures of Libya, to support Iraq, to ​​restore peace in Syria. This is a difficult, long work. But what do we have? The curvature of new political spaces is a line on the expansion of NATO ... For what reason is this, if the Warsaw Pact disappeared and the USSR collapsed? More post-Soviet countries have also confronted a false choice: are they with the West or with the East? This was used in Ukraine, where a civil war eventually broke out. The only way to stop the bloodshed is the strict implementation of the Minsk agreements. At the same time, we need a real account of the opinions of the residents of Donbass, a dialogue with them. Only then Ukraine will develop as a single state.

Vladimir Putin touched on the topic of sanctions. According to him, everyone in the current global world is counting on and counting on transparent economic cooperation, including through the WTO, but unilateral decisions of individual states have manifested themselves. These decisions are made to bypass the WTO and strike across the entire system of regional and global trade.

According to the President of Russia, there are also attempts at backstage economic solutions, which leads to an imbalance in world trade, with grave economic consequences. Obviously, in this case, it was about Ukraine’s attempt to enter the single economic space of the EU without informing both its citizens and its neighbors, including Russia. Vladimir Putin offered to discuss the possibility of overcoming these trade and economic barriers at the WTO site, as well as in the G20 format. As an example of how two different economic systems can work, Putin cited EEAC cooperation with China on the New Silk Road project.

At the end of his speech, Vladimir Putin touched on the topic of climate change and said that by 2030, Russia plans to reduce the amount of greenhouse gas emissions from 70 of the year to 75-1990. At the same time, the Russian president said that such measures should be systematic and discussed by all large countries at the UN sites.
Ctrl Enter
Noticed oshЫbku Highlight text and press. Ctrl + Enter
We are
Without a face. Ordinary Nazism, ordinary fascismIn Donetsk, laid the Alley of national unity
Military Reviewin Yandex News
Military Reviewin Google News
296 comments
Information
Dear reader, to leave comments on the publication, you must to register.