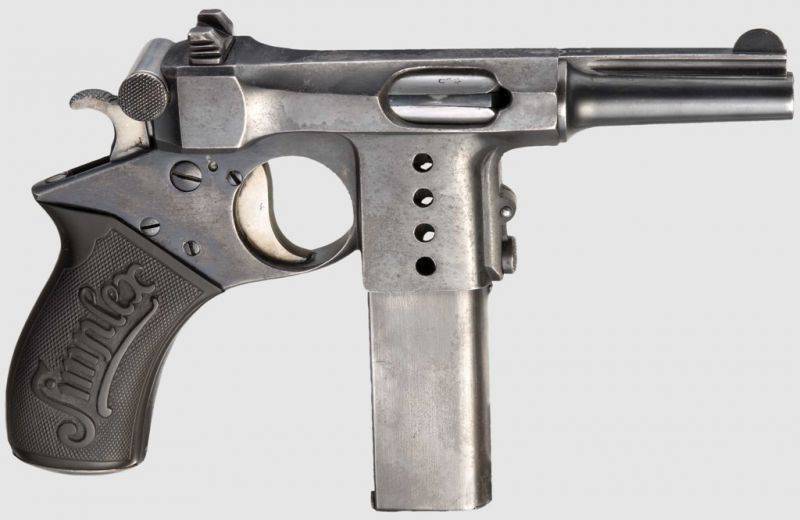 After an unsuccessful attempt to obtain military orders for pistols of the 1896 model line of the year and 1897 of the year, Theodor Bergmann decided to focus his efforts on two new projects. 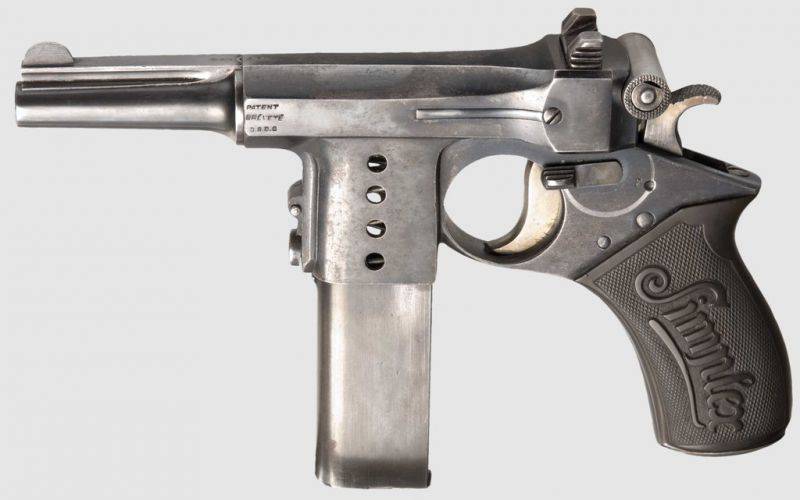 When creating a pistol Bergmann Simplex had two main objectives: to achieve compactness weapons and minimize its cost. To achieve these goals, the design of the gun is as simple as possible. So the mechanism for locking the pistol Bergmann Simplex is the simplest - locking the barrel was carried out with a mass of a free shutter. The pistol consists of a frame, a barrel, a bolt, a handle, a magazine and details of a firing mechanism. On the left side of the frame there is a safety lever with two positions “F” (fire) and “S” (fuse on), convenient for switching with your thumb.

In the pistol Bergmann Simplex used a new cartridge caliber 8 mm. The length of the 18 cartridge case is mm and it is slightly shorter than the 8 sleeve mm for the Bergmann pistol holder No. XXUMX. Characteristics of the cartridge 4 × 8 mm Bergmann allowed the use of locking the pistol with a free gate and well suited for self-defense weapons. There are reports that these cartridges could be used for Bergmann pistols No. XXUMX. 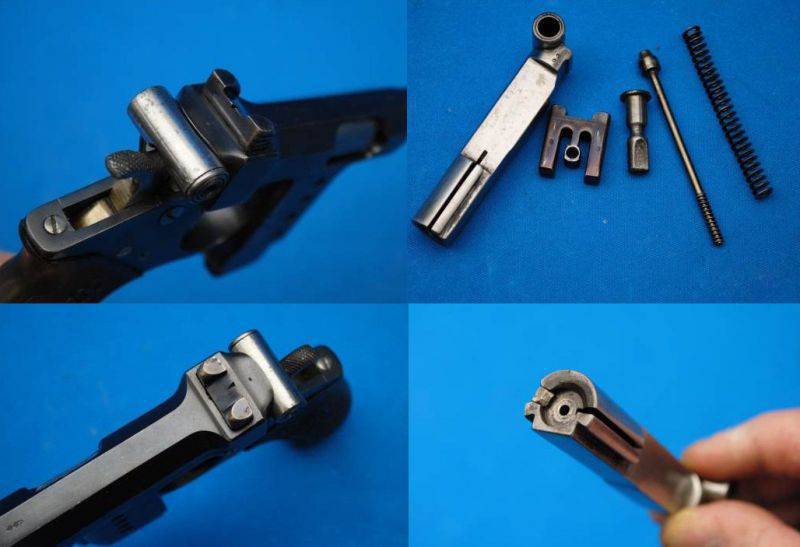 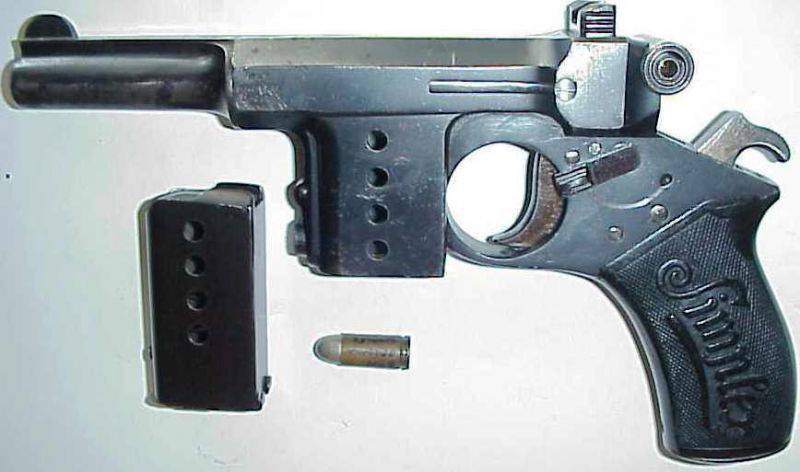 On the left side of the receiver mounted reflector, fastened with a screw. The trigger mechanism of a simple pistol - single action. The front sight of the pistol is semicircular, the rear sight is mounted on top of the receiver and fixed briskly.

Frame pistol Bergmann Simplex lite. So the frame handle consists of the front rack and shank. A single combat spring is attached to the front pillar with a screw.

The pistol Bergmann Simplex is equipped with a removable box-shaped two-row magazine for 5 cartridges. In the gun sometimes used as 8 and 10 charging shops. The magazine release button is located on the front of the frame. 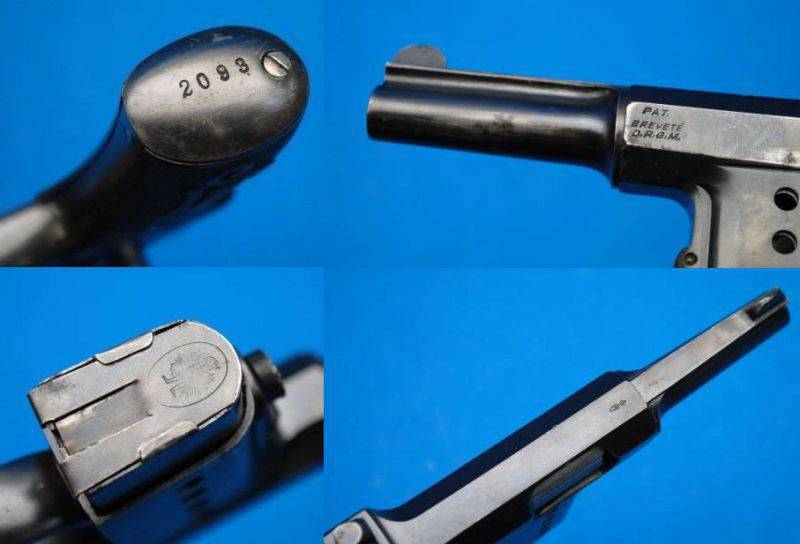 The marking of the pistol consists of the serial number printed on the shank of the handle and the mark of a miner at the bottom of the store. PAT is inscribed on the left side of the frame. / BREVETE / DRGM ". In the upper part of the frame in the area of ​​the chamber and in the upper part of the trunk there is a stamp in the form of the letter" U "under the two crowns. 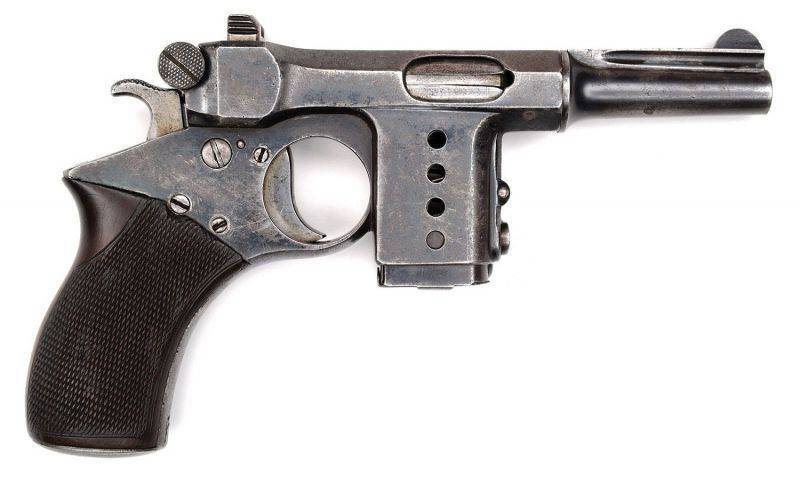 Speaking about the main varieties of the pistol Bergmann Simplex, you can distinguish weapons of early release, the period of mass production and later pistols. Of course, there were so-called transitional models. In early pistols, the bar above the barrel has a groove that resembles a dol. The window for removing the sleeves in the receiver of a pistol is rounded, slightly oval. The handle of capture of a lock on the right side is supplied with a small notch and has a slot for a screwdriver. 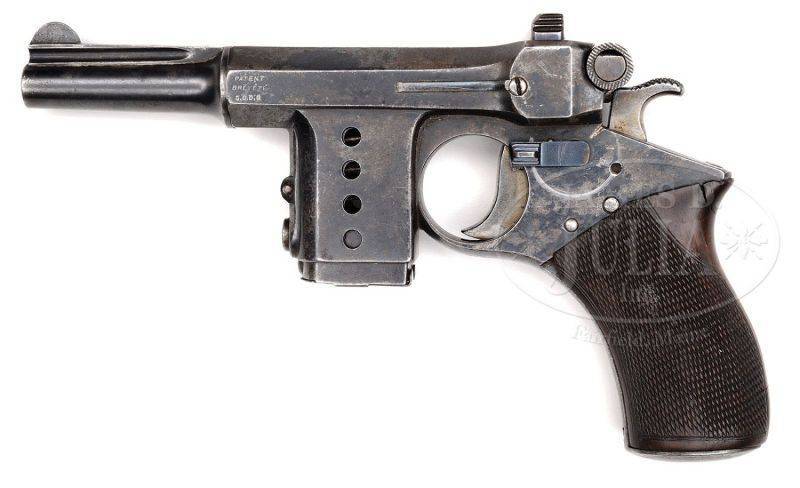 On the left side of the handle grip bolt is notched only around the ring. On the left side of the frame in the area of ​​the chamber there is a marking text: "PATENT BREVETE SGDG". In the earliest pistols, the handle was made from a single piece of walnut. The surface of the handle covers the small notch. In the shops of early pistols and serial production, only three holes were made to control the number of cartridges in the store. In the same frame of the gun, in the place of the store, there are four round holes on each side.

The pistol Bergmann Simplex of early release is marked in the upper part of the barrel and the chamber in the form of the letter “U” under the two crowns. On the basis of the gun barrel in the chamber area, a continuation of the relief of the upper edge of the receiver in the form of a “skirt” was made. Early pistols were manufactured at the VC Schilling facility in Suhl, Germany. The gun shown in the photo has a serial number of number XXUMX. 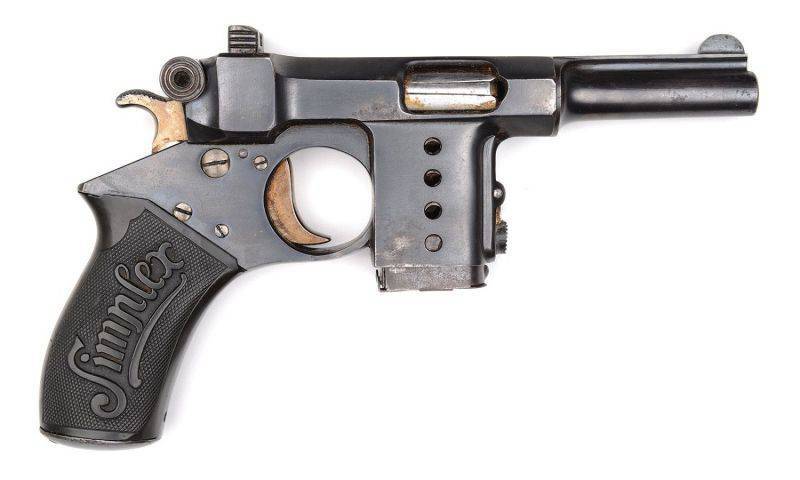 Bergmann Simplex mass-produced pistols are equipped with a handle made from a single piece of hard rubber. The handle has a notch and shaped text "SIMPLEX" on each side. It is for this inscription gun is easily recognizable. The handle is framed with a screw in the shank and a screw in the upper part behind the trigger. The window on the right side of the receiver, designed to remove the sleeves, has an almost rectangular shape. 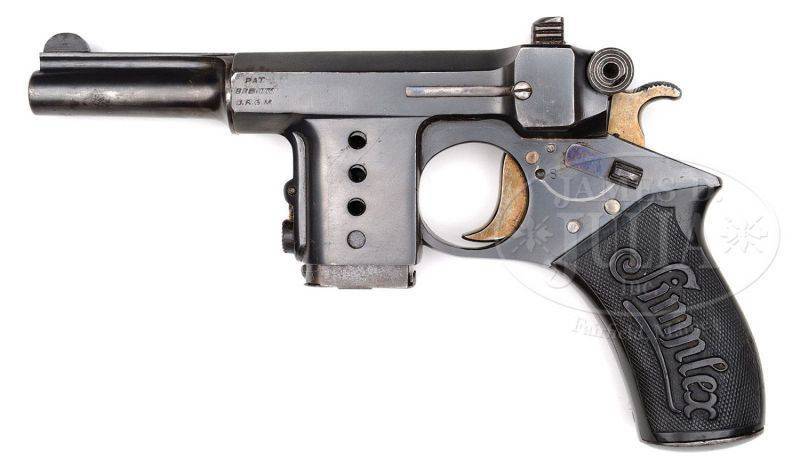 The bar over the barrel of the pistol does not have a pronounced dale, as in the early pistols. The handle of capture of a lock is executed in the form of "snail" with an opening in the center. Gun Bergmann Simplex is equipped with a barrel length 89 mm, which is screwed into the capital box. On the left side of the receiver in the area of ​​the chamber there is the marking text “PAT. / BREVETE / GRGM ".

This gun with serial number №2152 has a stamp in the upper part of the barrel in the form of the letter “U” under the two crowns. Unlike early pistols, at the base of the threaded part of the barrel on top there is no characteristic "skirt". Pistols Bergmann Simplex, with the exception of the earliest, were produced in Belgium. Many researchers point to the low quality not only of materials, but also of manufacture, due to which a low cost price of weapons was achieved. 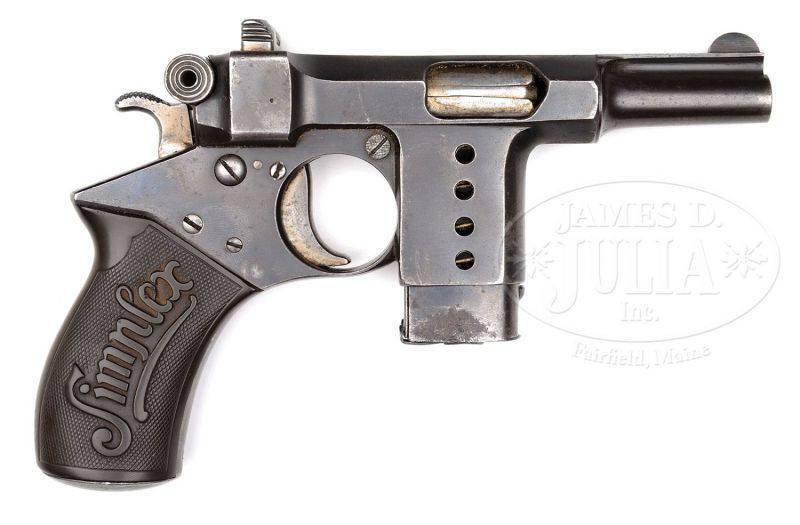 Bergmann Simplex pistols of late release and the frame and in the stores there are four holes to control the consumption of ammunition. The length of the shop for a later-issue pistol is somewhat longer than that of earlier models. The photo shows a gun with serial number number XXUMX. 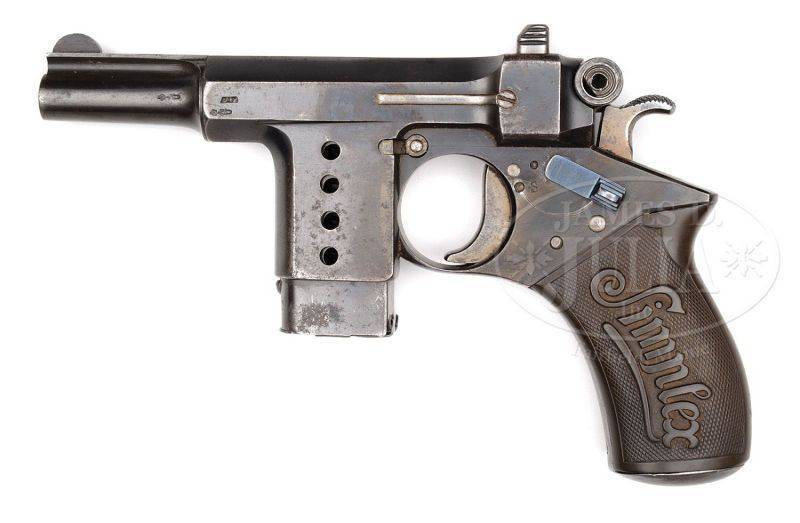 Changed and marking. On the left side in the area of ​​the chamber there is only the text “PAT”. In addition, stamps in the form of the letter “U” under the crowns from the upper part of the barrel and the receiver have moved to the left side of the weapon. The length of the gun barrel also decreased to 70 mm, thanks to which the weapon became even more compact.

At the top of the gun, not only did the marking disappear, but the transition between the barrel and the receiver was also smoother. 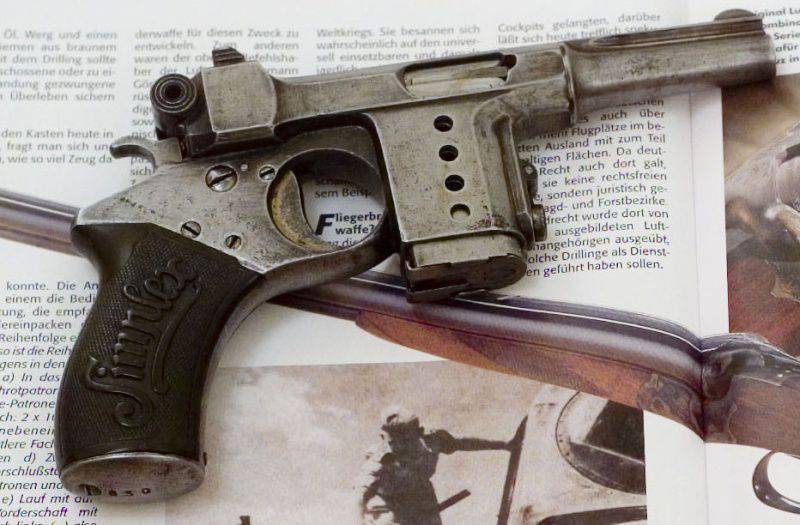 The low price and good characteristics of the pistol Bergmann Simplex attracted buyers. According to preliminary estimates, a total of about 3500 — 4000 pistols were released. Some researchers have noted the release of Spanish copies of this gun. However, the appearance on the market of the Browning M 1899 / 1900 pistol, which set high standards of quality and reliability for self-defense weapons, did not leave any chances in competition of potential rivals, including the Bergmann Simplex pistol.

Any Bergmann pistols are in demand among collectors. The average price of Bergmann Simplex pistols at gun auctions ranges from 2500 to 3500 dollars.