29 September 2015
20
In connection with the adoption of the anti-aircraft cannon-missile complex 2K22 "Tunguska" in 1982, the serial construction of anti-aircraft self-propelled units ZSU-23-4 "Shilka" was stopped. By this time, the troops had a similar technique of several modifications, the newest of which was ZSU-23-4М3. According to reports, over time, most of the remaining "Shilok" troops went through modernization to the state of "М3" and in this form continued to serve until the cancellation.


The project of modernization ZSU-23-4М3 was created in the late seventies, which accordingly affected the achieved performance. The appearance of the new complex "Tunguska", in turn, led to a complete halt in the development of the Shilka project. However, after some time, new options for upgrading old anti-aircraft self-propelled guns appeared. Since the late nineties, work began on the modernization of this technology through the use of new equipment. Two new projects can significantly increase the combat potential of outdated equipment and extend its service life.

In the second half of the nineties, the Ulyanovsk Mechanical Plant proposed an original concept for the development of outdated systems of the Shilka family. Due to some improvements in the design and installation of new equipment, it was planned to significantly improve the performance of combat vehicles, making it possible to use them in modern armed conflicts. In addition, the upgrade of self-propelled on-board equipment made it possible to increase their maintainability through the use of modern elemental base. 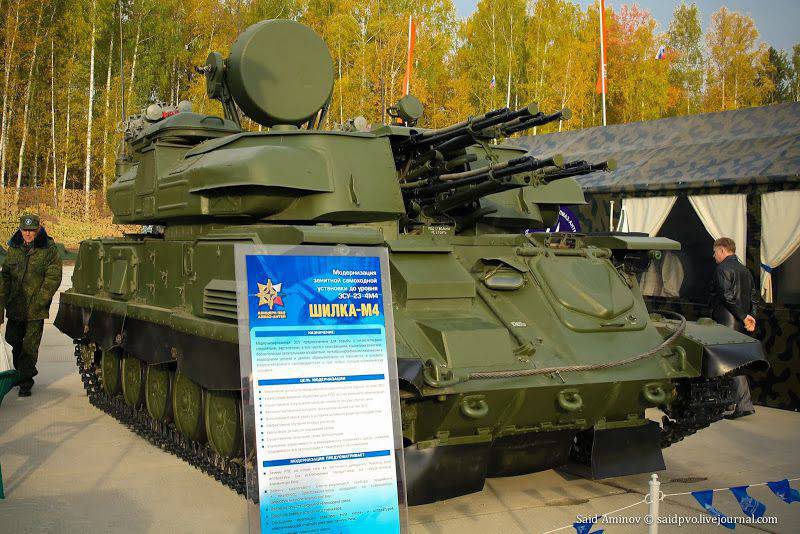 The new anti-aircraft self-propelled modernization project received the designation corresponding to the previously used nomenclature - ZSU-23-4М4 or “Shilka-М4”. The main part of the work to create this project was undertaken by the Ulyanovsk Mechanical Plant. He had to develop an updated complex of radio-electronic means, as well as master its release. In addition, the project attracted the Belarusian company "Minotor-Service", which was supposed to upgrade the base chassis and its units.

As part of the modernization project ZSU-23-4М4, the existing equipment loses most of the existing equipment, instead of which it is proposed to install a new one. In particular, instead of an analog computing device, it is proposed to use a digital computing system. In addition, a new fire control system is used. Also in the project there were some other improvements. The use of new equipment allowed to significantly improve the performance of the combat vehicle, as well as reduce the volume required for its placement. So, the radar-instrument complex of the old “Shilok” was located in seven cabinets. In the “M4” project, only five cabinets are allocated for this equipment.

During the modernization of self-propelled gun "Shilka-M4" retains the basic principles of combat work. Like the previous machines of the family, the new ZSU-23-4М4 must monitor the situation and make an attack of the targets with the help of a radar fire control system. Antenna radar target detection is still located in the aft of the tower.

It is proposed to include equipment for receiving external target designation and data output via the telecode channel as part of the on-board electronics. This equipment provides for joint operation with the battery assembly command post, which expands the combat capabilities of both the individual combat vehicle and the entire formation. For example, it is possible to simultaneously fire at one target with five self-propelled guns. 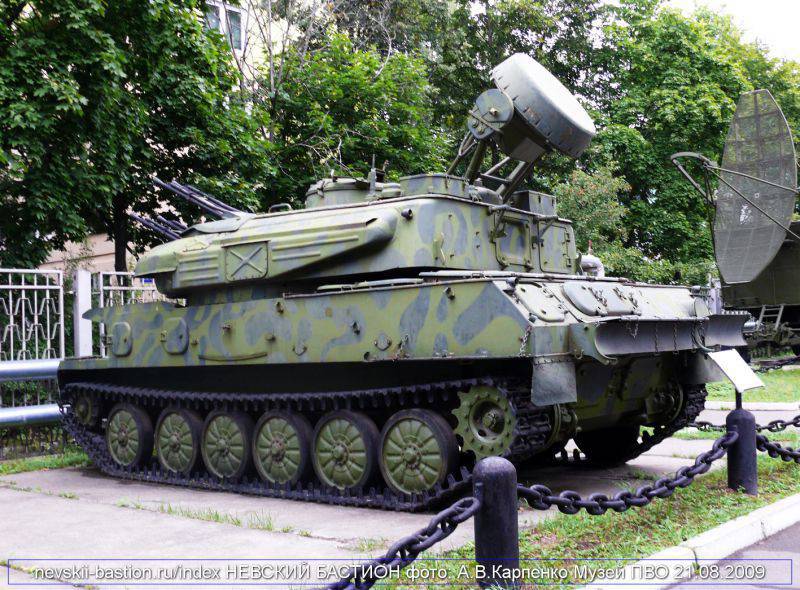 Another important innovation of the ZSU-23-4М4 project is the training device of the radar operators, with which personnel can be trained without the use of third-party tools.

All used improvements are designed to increase the combat effectiveness of individual machines and batteries. The ability to communicate with the battery command post and obtain third-party target designation allows integrating anti-aircraft self-propelled guns into the general structure of the military air defense and, as a result, expanding the information field of the air situation. The updated digital equipment of the combat vehicle has a higher performance in comparison with the electronics of previous models, which reduces operating time and also allows for faster processing of data and carrying out an attack.

Unlike its predecessors, Shilka-М4 can work in a difficult jamming environment, as well as effectively detect targets at low altitudes. Also, the automation of the complex independently takes into account the meteorological conditions, the wear of the gun barrels and other factors affecting the trajectory of the projectiles.

The upgraded combat vehicle has several new modes of operation. First of all, it is necessary to note the possibility of automated operation of an anti-aircraft gun under the control of a higher command post. In the training mode of the radar operators, automatics can imitate work in difficult conditions. In this case, the screens display information about several (no more than five) targets. Simulation of passive and active interference is also possible. 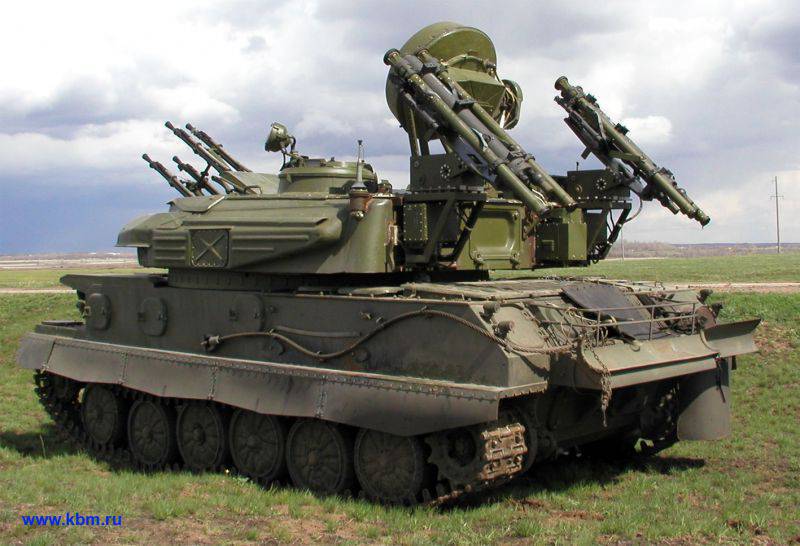 In order to significantly improve the combat performance of the updated self-propelled gun ZSU-23-4М4 gets guided missile weapons. In the aft part of the tower, it is proposed to mount two “Strelets” launchers with mounts for four transport-launch containers of “Igla” missiles. Launchers have their own vertical guidance drives. Azimuth guidance is performed by turning the entire tower. The initial elements of the ground equipment of the Igla complex are not used. Their functions related to target search and fire control are performed by existing anti-aircraft self-propelled electronic equipment.

The Shilka-M23 ZSU-4-4М4 project only implies the modernization of existing equipment, since the Shilka family combat vehicles have long been discontinued. At the same time, however, the project provides for some measures aimed at extending the service life of equipment. So, during the manufacture of a promising anti-aircraft self-propelled unit it is supposed to overhaul all components and assemblies that cannot be replaced with new ones. In addition, outdated hardware units, etc. dismantled and installed in their place new. All this allows to significantly extend the life of the machine, ensuring its further operation.

During the upgrade to the state of "М4", no major alterations of the basic design are made, thanks to which the updated self-propelled gun keeps dimensions and weight at the level of the basic model. In addition, the previous characteristics of mobility remain.

The new radio-electronic equipment allows the Shilka-М4 to detect the target and take it to tracking at distances up to 10 km. When the combat vehicle is integrated into the system of military air defense, this parameter increases significantly. When working together with the battery command post and third-party detection tools, the range at which the target is detected increases to 34 km.

During the modernization of the ZSU-23-4М4 retains the old artillery armament in the form of a quad 2A7М assault rifle 23 mm. These guns can be guided in any azimuth direction with an elevation angle from -4 ° to + 85 °. With an initial velocity of the projectile at 950-970 m / s, effective shooting is possible at a distance of up to 2-2,5 km. Reach height - 1,5 km. Ammunition - 2000 shells on all four guns. With the available characteristics, automata can be used to attack air targets moving at speeds up to 500 m / s. 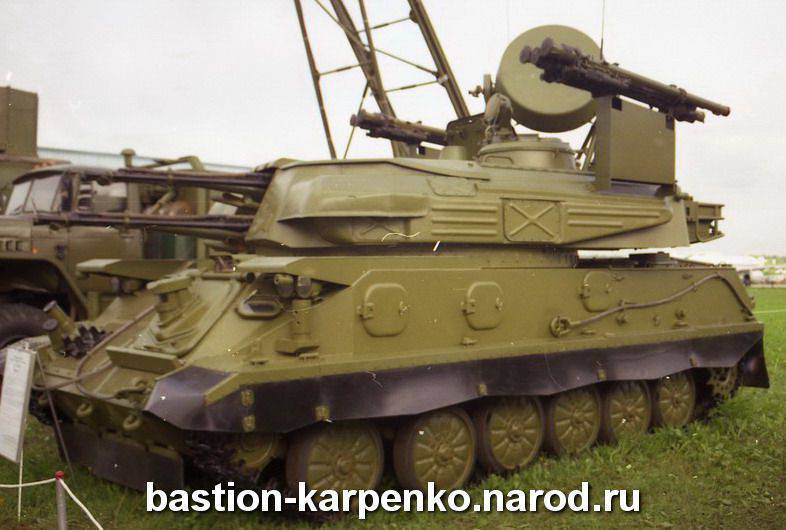 When using 9М39 “Igla” guided missiles, the maximum target destruction range is increased to 5-5,2 km, height - to 3-3,5 km. The maximum speed of the target, depending on the angle, reaches 360-400 m / s. The target is hit with a high-explosive fragmentation warhead. On the two launchers of the tower are placed four containers with 9М39 missiles. According to some reports, four more missiles can be transported inside the car and mounted on the launchers after the ammunition set is ready for use.

Simultaneously with the Shilka-M4 project, a modernization option was proposed under the designation ZSU-23-4М5. Like the previous project, it was created in the framework of cooperation between enterprises of the two states. At the same time, in view of the different composition of special equipment, Minsk NPO Peleng was attracted to the development of the M5 self-propelled guns. It was to develop and supply some new equipment intended for use as part of a fire control system.

The ZSU-23-4М5 modernization project is based on the same ideas as the ZSU-23-4М4, but receives a number of new equipment. Both combat vehicles have the same fire control systems, weapons, etc. The only difference between Shilka-М5 is the presence of an optical-location channel as part of the fire control system. Due to this, a certain expansion of the combat capabilities of the self-propelled guns is ensured, since the optical-location system is capable of ensuring combat operations even under conditions of strong interference that impede the radar station.

In the project "Shilka-М5" it is proposed to equip the self-propelled gun with an additional television viewfinder and laser rangefinder. This equipment is integrated with other onboard systems, due to which the crew has at its disposal a set of optical and radar facilities that complement each other.

The proposed optical-location systems allow you to monitor the situation, to find targets and take them to support at any time of the day without serious restrictions on meteorological conditions and other factors. In addition, the characteristics and overall performance of the television reticle are enhanced by the parallel use of radar. As a result, a TV viewfinder with a range finder and a radar station, duplicating each other, increase the likelihood of tracking a target with further shelling using cannon or rocket weapons. 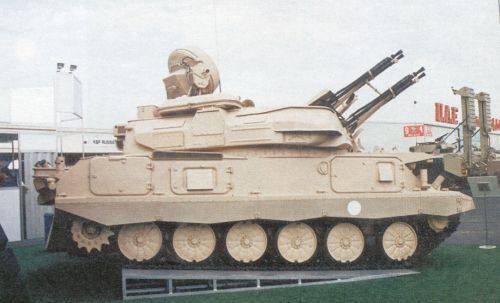 Self-propelled anti-aircraft installations ZSU-23-4М4 and ЗСУ-23-4М5 have the same dimensions and mobility characteristics. There are also no differences in the characteristics of the range and height of the targets hit, their speed, etc. Thus, the only major difference between the two combat vehicles is the composition of fire control systems. In the case of the “M5” project, a universal complex with a radar and optical channel is proposed, which in some situations can provide greater efficiency of combat work in comparison with the equipment of the “M4” machine.

Two new projects are of great interest to potential customers, since they allow updating the equipment available to the troops with minimal costs, significantly increasing its characteristics. At the same time, a very interesting appearance of a combat vehicle consists of several main components. First of all, it is the maximum possible use of original components with minimal changes. During the modernization of the new projects "Shilka" in the basic configuration should undergo repairs, as well as preserve the main structural elements, including weapons.

Increased performance is achieved through the complete processing of onboard radio-electronic systems with the replacement of outdated analog equipment with modern digital equipment. As a result, new modes of operation appear, including the possibility of effective use of weapons in a difficult jamming environment. Finally, the projects imply the introduction of some completely new equipment into the equipment of the combat vehicle. These are launchers for guided missiles in both new projects, as well as an optical-location system in the ZSU-23-4М5 project.

The proposed projects for the modernization of the Shilka self-propelled self-propelled guns are of particular interest to many countries, which are still armed with such equipment. Not all of these countries have the opportunity to write off existing ZSU-23-4 and replace them with newer equipment. The proposals of the Ulyanovsk Mechanical Plant, Minotor-Service, and NPO Peleng, in turn, make it possible to seriously upgrade the fleet of equipment without the major costs associated with buying completely new cars.

Nevertheless, as far as is known, the ZSU-23-4M4 and ZSU-23-4M5 projects have not gone beyond demonstrations of prototypes at exhibitions. Despite all the efforts of the developers, so far no one has expressed a desire to upgrade their equipment to the Shilka-M4 or Shilka-M5 modifications. This technique so far exists only in the form of several prototypes. When there will be contracts for a similar modernization of anti-aircraft self-propelled guns - until the end it is not clear. Perhaps the active development of combat aviation and aviation weapons observed in recent years, will be an incentive for some states. However, it cannot be ruled out that two interesting projects will not become the subject of contracts for the modernization of technology.