General Russophile and his golden words

29 September 2015
35
“Every good Frenchman is happy about the victory of Russia,” said General de Gaulle, who had the reputation of a Russophile in the West. In Europe, today suddenly remembered the eminent general. They recalled his speeches made in 1942 and in 1966. The reason for which de Gaulle began to be quoted is connected not only with the growing role of Russia in modern geopolitics, but also with the pitiful semblance of the independent state that France has now become. 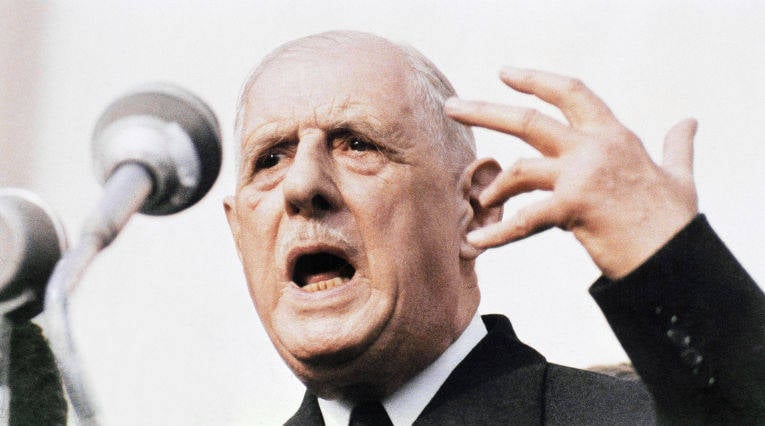 Nicolas Bonn on the portal reseauinternational.net recalled those words that the general said in January 1942 of the year to the Russian people who fought against the German fascist invaders.

“Wishing to pay tribute to the courage of Russia in the terrible winter of 1941-42, the general delivers a splendid battle speech on London’s 20 radio in January 1942,” the journalist quotes "Mixednews". “An excellent strategist, he realized earlier than others that Nazi Germany would lose the war against Russia.”

“For Germany, the war in the east today is just a graveyard in the snow, mournful trains with the wounded, the sudden death of generals,” the general said on the radio. - Of course, one should not think that the military power of the enemy has been completely undermined. But, without any doubt, the enemy had just suffered one of his biggest failures, who had ever known история».

Then de Gaulle said an ode to heroic Russia: “While German power and authority shakes, we see the star of Russian power rise to the zenith. The world recognized that this nation is worthy of greatness, because 175 millions of people know how to fight, that is, to endure and strike, that they have risen in an organized manner from weapons in the hands, and even the worst trials did not shake their cohesion. The French greet with great enthusiasm the success and enthusiasm of the Russian people. ”

Moreover, the general foresaw Russia's balancing role in the international arena: “On the political arena, Russia’s strong advancement to the forefront of tomorrow’s winners brings Europe and the world a guarantee of balance, and no power has any reason to congratulate themselves on this event than France . Unfortunately for all, too often for centuries the Russian-French alliance was hampered and opposed by intrigue or misunderstanding. But, as at any turning point in history, our alliance does not make it any less necessary. ”

There is also another speech by de Gaulle - the President of the French Republic. Charles de Gaulle pronounced it in June 1966, in Moscow, during an official visit to the Soviet Union.

"The visit to your country coming to an end is the visit of eternal France to eternal Russia ... Therefore, having come to you, I felt that my act and your reception were prompted by mutual respect and cordiality, which are no past battles, no differences in political regimes, nor the growing confrontation caused by the division of the world could not be broken. ”

And again, the general praised the Russian people: “After the enormous transformations brought about by the revolution and lasting for almost fifty years at the cost of sacrifices and tremendous efforts; after the terrible drama that the victorious war became for you more than twenty years ago, thanks to the role you played in it that brought the Soviet Union the highest degree of power and glory; after so much destruction and final restoration, we see your country alive, stately, developing in all respects, preparing to send its astronauts to the moon. ”

Not for nothing these days the newspaper analyst remembered de Gaulle, let us add. When the present-day France, with its mistral president, dances to the American tune, there are still people who understand the destructiveness of American policy, which turned countries either into their vassals or into dust.

The de Gaulle Russophile (and anti-American) reputation, we recall, was made up of many of his statements.

23 November 1959 of the year, the same year he became president (8 January 1959), de Gaulle made a speech in which he spoke about "Europe from the Atlantic to the Urals". Even then it was clear that the new president did not approve of the "Anglo-Saxon" NATO bloc. (By the way, de Gaulle did not consider that Great Britain is part of the European community.)

In the same year, the President took the first steps to reduce France’s dependence on NATO. De Gaulle transferred the missile and air defense forces under French command. He did not ask “permits” for overseas “partners” (with which he was very unhappy with the White House). The brave de Gaulle answered questions from overseas in the spirit that France is its own mistress.

Then there was the atomic bomb. If, before the general, the government of the Fourth Republic tried to conclude a military alliance with the FRG and Italy, de Gaulle relied on the independence of the French nuclear forces and ordered that the work on creating atomic weapons be accelerated.

The first nuclear test was already conducted on February 13 1960 of the year in Algeria. Later there were other tests. In 1963, they were successfully implemented on the atolls of Mururoa and Fangatauf in French Polynesia. De Gaulle attached great importance to the military development of the latest technologies (as well as to the peaceful one). Under de Gaulle, France refused to join the moratorium on nuclear testing announced by the United States, the USSR and the United Kingdom (1958-1961). Paris joined the Treaty on the Non-Proliferation of Nuclear Weapons only in 1992 year.

In 1965, de Gaulle was reelected for a second term. Already in February, 1965, in February, the president announced the refusal of France to use the American dollar in international payments: “Gold does not change its nature: it can be in bars, bars, and coins; it has no nationality, it has long been and is accepted by the whole world as a constant value. There is no doubt that even today the value of any currency is determined on the basis of direct or indirect, real or supposed bonds with gold. ”

At that time, France became one of the leading "golden powers" - in 1965, it had 4.200 tons of gold reserves. De Gaulle, according to some sources, called dollars "green candy wrappers."

Armed with the idea of ​​a gold standard, de Gaulle demanded gold from the US in exchange for dollars - in accordance with the Bretton Woods system. He told Lyndon Johnson that he decided to exchange dollar bills in the amount of 1,5 billion for gold at the current official rate: 35 amer. $ per 1 oz. Johnson was angry, but the French managed to send the ship (it was about 750 million dollars) and the plane, which sat down at the airport in New York. Also with millions in "candy wrappers".

There was a protracted dispute between the presidents of the United States and France, during which, according to available information, the French took more than three thousand tons of gold out of Fort Knox, announced the evacuation of the NATO headquarters, NATO and US military bases from France, and the withdrawal of NATO troops .

9 September 1965 of the year de Gaulle announced publicly that France does not consider itself bound by NATO obligations, and the following year, February 21, the country withdrew from the military bloc. The headquarters of the alliance "moved" from Paris to Brussels.

The American president stamped his feet.

France’s international policy has become truly anti-American. During his visits to the USSR and Cambodia in 1966, Mr. Gaulle condemned the actions of the United States against the countries of Indochina.

In May, 2015 of the year in the print organ of the Central Committee of the Communist Party, newspaper "True", an article by Wolf Sedykh, a correspondent for Pravda in France in 1968-1976, an honored cultural worker of the RSFSR, appeared. For six decades, the correspondent has repeatedly spoken with many famous French veterans of the Second World War.

The author recalls that the President of the French Republic, Charles de Gaulle, being in the USSR on an official visit in June 1966, spoke a great deal at his speeches about the mutual sympathy of the peoples of the two countries. He talked about this in Moscow, Leningrad, Novosibirsk, Kiev, Volgograd (he called this city Stalingrad). The President of France more than twenty times spoke to the audience. He often ended his speech in Russian.

Addressing the inhabitants of the hero city on the Neva, Charles de Gaulle said: "The greatest event of your history happened here - your revolution ... Leningrad made an extremely important contribution to the victory of Russia, as well as to the victory of France and our allies." At the end, the president spoke in Russian: “Long live Moscow, long live Russia, long live friendship between the French and Soviet peoples!”

Wolf Sedykh attended this and several other meetings with General de Gaulle, and also participated in the information training of the Franco-Soviet summit talks. A month before these negotiations, a delegation of the Union of Journalists of the USSR visited France. And just before the trip to Paris, France announced its withdrawal from the military organization of NATO.

“Long before this resonant decision, at the insistence of the French president,” writes the journalist, “the ancient land of the Gauls was cleared of American military bases. The French also opposed US military aggression in Vietnam. In an effort to pursue an independent policy on the international arena, the head of the French state was counting on understanding and support from the mighty Soviet power, which opposed the hegemonic course of Washington that is dangerous to universal security, for the establishment of a unipolar world under our control on our planet. ”

Washington's hegemony, unrelenting and dangerous attempts to impose a “unipolar” vision on the world, and even more theses on the “exclusivity” of the American nation, resembling poorly disguised Nazism and justifying Washington's intervention in the affairs of any country in the world - this is the list of American actions that cause fear of all mankind. And the progressive-minded French, seeing how the current president Hollande makes curtsies before the owner of the Oval Office, do not want to become unwitting participants in the catastrophe to which the peacemaker Mr. Obama is pushing Europe. That is why Nicolas Bonn recalled the words of General de Gaulle.

Observed and commented on Oleg Chuvakin
- especially for topwar.ru
Ctrl Enter
Noticed oshЫbku Highlight text and press. Ctrl + Enter
We are
Results of the week. "Golden hands - to whatever touches, all smithereens!""Charles de Gaulle" goes to war again
Military Reviewin Yandex News
Military Reviewin Google News
35 comments
Information
Dear reader, to leave comments on the publication, you must sign in.