October 4 2015
47
The competent American publication Popular Mechanics has published a lengthy text about the Russian heavy flame thrower system. Readers were told: “When they start talking about ground-based weapons systems, it’s difficult to find something more frightening than the Russian Buratino flamethrower system. A full volley of the flamethrower system of 24 missiles is capable of incinerating 8 urban neighborhoods, thereby creating a "hell on earth for all who find themselves in the affected area," the magazine emphasizes. 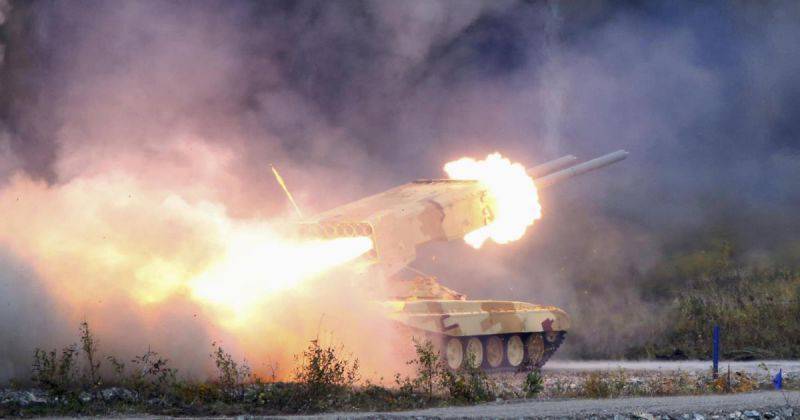 And a year ago, when there were battles for the Donetsk airport, panic articles almost simultaneously appeared in the Western and Ukrainian press that the militiamen had terrible flame-throwers "Sunpinek", therefore, "maydanutykh cyborgs", airport defenders, had no chance to survive. Since almost all the "cyborgs" were mercenaries, then, having heard of the mortal danger hanging over them, the "zombie terminators" chose to leave the fighting positions. The airport came under the control of the militia.

... Flamethrower systems appeared before our era. They were of two kinds. Flame force was directed towards the enemy with an air jet, or incendiary projectiles were thrown with the help of catapults. The most famous was the "Greek fire" - a kind of napalm of the Middle Ages, a mixture of which consisted of many components that allowed the flame to burn even in water.

With the advent of artillery, the role of flamethrowers, the range of which was small, sharply decreased. Revived them in the twentieth century. The greatest success was achieved by the Germans. Flamethrowers were used to burn the entrails of the fortified structures and for psychological impact on the enemy. The impact was terrible. This is confirmed by the fact that captured German flamethrowers were never spared, often they themselves were burned alive ...

Flamethrower - really monstrous weapondifficult to argue with that. But any war is murder. And is it not monstrous? If, however, the enemy, realizing that he will not only have to die, but a terrible death, lay down his arms, thereby preserving life for himself and those with whom he fights, how is this to be perceived?

Therefore, we will not go into absolutely hypocritical arguments about the humanity or inhumanity of the weapon, in any case bringing death. Consider its technical side.
In the USSR in the seventies of the twentieth century developed a portable flamethrower "Bumblebee". In it, the incendiary mixture was placed in a thin-walled metal capsule, which was fired from a specially designed disposable container. When the Soviet Army began fighting in Afghanistan, these flamethrowers showed their high efficiency. They were guaranteed to destroy snipers or grenade throwers, hiding in mountain crevices, where they could not reach the usual blast wave.

In the same years, a heavy jet flamethrower system of volley fire was created, firing 220 mm missiles with a volume-detonating incendiary mixture. Each rocket was loaded with 100 kilograms of thermobaric mixture. It dissipated in the air and exploded, creating pressure in the 30 atmospheres and temperatures up to 3000 degrees. The mixture penetrated through the slots into a leaky bunker and destroyed the bunker itself and everything in it, a powerful fiery and blast wave.

Everything burned, alive and inanimate. In addition, there was the effect of "vacuum bomb" due to the burning of air. It was impossible to survive in the hellish flames and instantaneous pressure drops. They called the terrible weapon childishly: “Buratino” TOC-1.

Flamethrower salvo system mounted on the chassis tank T-72. A package of 30 launch tubes was closed with an armored box that protects against damage by bullets and fragments. This was done because the ignition of a rocket located in the pipe inevitably led to the complete destruction of the entire installation and everything that was within a radius of hundreds of meters from it. The fact is that the range of fire with flamethrower missiles was small - up to 4,5 kilometers. And "Pinocchio" actually exhibited on the line of fire. TOC-1 was supposed to be used at the leading edge within the visual visibility of the enemy.

"Buratino" was first used in Afghanistan in the early eighties to destroy caves and improvised bunkers. The use of "Pinocchio" made a terrible impression on dushmans. Those who saw the sea of ​​fire in the distance and remained alive could no longer forget it. Here you can say about what. One of the favorite tactics of Dushman was to hide in the mountain gorges, where there were many trained “holes”, of which unexpectedly struck the convoys of the troops of the limited Soviet contingent, who had the imprudence to enter the gorge. Detecting shelter in advance and knock out bandits from them was considered almost impracticable. And if the column of our army came under attack, Buratino entered into action.

They treated those areas of the gorges in which the hidden positions of the "spirits" could be. Everything that was on the open surface was burned. And the effect of the “vacuum bomb” did not leave a chance to survive for those who were hiding in the crevices or small caves.

The flamethrower was one of the most secret combat systems of the Soviet and then the Russian armies. Open "Buratino" showed only in 1999 year at an exhibition in Omsk.
In 2001, by joint efforts of the Omsk Transport Engineering Engineering Bureau and the Splav enterprise in Tula, a more sophisticated and lightweight version of the TOL-1A Solneptek was created.

It features a more advanced fire control system, fewer rocket barrels - 24 instead of 30, better armor protection and new ammunition. By the way, the American edition of Popular Mechanics, although it writes about Buratino, but in fact it is precisely Sun Solovice. The firing range of the new missiles increased to 6 kilometers, and the radius of destruction of each missile increased. One such installation burns everything in the territory up to 40 thousand square meters, there is nothing left alive. In the future, "Sunlight" will be based on "Armata". All 24 TOC-1A missiles can be fired within 24 seconds, delivering tons of fire mixture to the 2,4 target.

"Sun" adopted by the Russian army 4 April 2001 of the year. It is in service with the troops of radiation, chemical and biological protection. And since 2008, the export of the system has been allowed, and this flamethrower is already being shipped to Iraq.

If among the commanders of the Islamic State group in Iraq there are experienced commanders, especially those who have passed the “Afghan”, they must have heard some terrible ones - not fairy tales! - about "Buratino".

And those who will experience the heat of the Suntape are unlikely to want to fight for the interests of the “new world order”, which is constructed not by Islamic sages, but by people for whom there is one god — the golden calf and the paper dollar.
Therefore, "Buratino" and "Sunlight" should be considered a highly humane weapon capable of stopping the fratricidal slaughter in the Middle East. Heavy flamethrowers of Russia carry peace there!