Project "ZZ". And it's all about him

28 September 2015
62
In the West, people talk, talk, talk about Putin and cannot stop. This surprises even Putin himself, and he remarks: that they have nothing more to do? Some experts study the “way of thinking” of the Russian leader, others point out that they should not be “fenced off” from Putin, but on the contrary, they should cooperate with him, while others remind that in the West Putin has been nicknamed “tsar”. Daniel Trisman, a professor of political science at the University of California, has figured out Putin’s philosophical preferences, and British Prime Minister D. Cameron suddenly wanted to fight IG together with Putin. Not a day without Putin! It seems that the Russian president has become a powerful geopolitical brand. 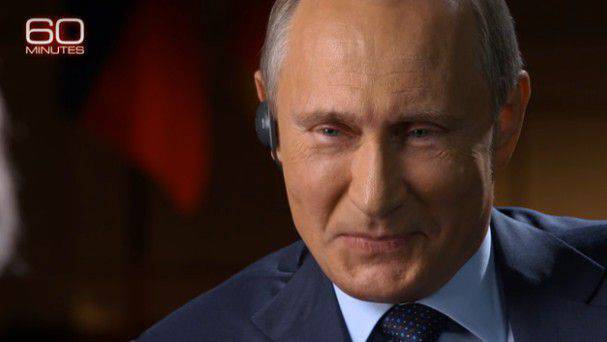 Putin says he's not a "czar". Putin said he is not a king. In such a joking tone on the TV channel CBS News The other day a conversation between the lead Charlie Rose (Charlie Rose) and Vladimir Putin took place in the framework of the program “Sixty Minutes”.

The Russian leader, obviously, amused a number of questions of the journalist. This is evident from his frequent smile.

Mr. Rose told the Russian president that in the West they talk a lot about him and even call him "the king." The TV presenter decided to clarify whether Putin knows about this, to which the Kremlin master replied: "They probably have nothing more to do except to talk about me."

According to Putin, this nickname does not suit him.

The main topic of discussion was the situation in Syria and Russian assistance to Assad.

The leader of Russia said that the overthrow of the legitimate government of Syria would lead to a situation in Syria, similar to the Libyan or Iraqi. Moscow’s position in the region is that the conflict in Syria should be resolved by strengthening the existing institutions of power. There is simply no other way. Further, Vladimir Putin confirmed the information on supplies weapons and humanitarian aid to the Syrian government. In addition, Putin called the Syrian army "the only force that can withstand terrorists." However, "the United States does not hide the fact that their goal is to overthrow the regime of al-Assad, and they are trying to support militants from opposition groups." Having said that, the Russian leader warned of the dangers of international terrorism.

The former Minister of Foreign Affairs of Germany, Hans-Dietrich Genscher, touched upon the Syrian theme, as well as the theme of Russia's place in the modern world. His opinion was led by Daniel Sturm and Dagmar von Taube (Daniel Friedrich Sturm, Dagmar von Taube) in the German newspaper «Die Welt».

Herr Genscher believes that the EU’s open borders for refugees are good and correct: “This shows that we are taking responsibility.”

According to Genscher, all EU member states are obliged to accept refugees. Not only Germany and Austria with Sweden, but in general all European states should shelter those who flee from grief. No one should stay "on the shores of the Mediterranean".

As for Syria (where many refugees come from), with regard to this country, Herr Genscher called on the United States, China and Russia to develop a "joint peace initiative."

The initiative is needed for states to take responsibility, Genscher believes. It should involve permanent members of the UN Security Council and many other countries.

According to Genscher, negotiations on the Iranian nuclear issue have shown that “the most difficult issues” can be resolved through international cooperation, including with Moscow. “Why not do the same in the case of Syria?” Genscher asked.

The Syrian solution would help stop the refugee crisis, he said. After all, the reasons for leaving the country would no longer be.

Genscher called for a campaign for closer cooperation between Russia and the West. He does not think that President Vladimir Putin is pursuing a "reactionary policy." In his opinion, Putin is only "defending Russia's place in the new world order."

According to the former minister, Germany wanted cooperation for Europe, and not confrontation at all. The fall of the Berlin Wall at one time ended the division of Europe. And Russia today is part of Europe.

Negotiations with Putin, however, “do not change the fact that Moscow’s policy towards the Crimea and Ukraine cannot be approved,” Genscher believes.

Another gentleman, ready to cooperate with V. V. Putin, showed up among the London autumn fogs.

As told by Jason Farrell, correspondent for the British edition Sky NewsPrime Minister David Cameron declared his readiness to cooperate with Vladimir Putin for the sake of the victory over the Islamic State.

As the journalist notes, Cameron hopes to “breathe life” into the search for a political solution to the Syrian conflict that took 200.000 lives.

According to the press secretary of Mr. Cameron, "IG" is a "clear" threat, not only in Europe and Russia, but also in many other countries of the world. Therefore, you should find a common path and “work together”.

David Cameron is set to cooperate with Russia. True, he immediately explains that the UK wants to save Syria from Assad at the same time. A spokesman for the head of government said that both IG and Bashar Asad are “enemies of the Syrian people.”

Therefore, the London plan is this: to eliminate the threat of IS and find a political solution that would lead to the transfer of power from President Assad to another leader. This "other" could "unite the people of Syria and the government."

The article also notes that the UK is currently the second largest “donor to the region” after the United States and is sending 1,1 billion pounds in aid. (There is no clarification on who gets this money.)

The American topic Daniel Treisman, a professor of political science at the University of California, was also unable to circumvent Putin’s topic in his article. One of the illustrations of his material published in Washington Post, became the cover of the book “New King” by Stephen Lee Myers (Putin’s biography). 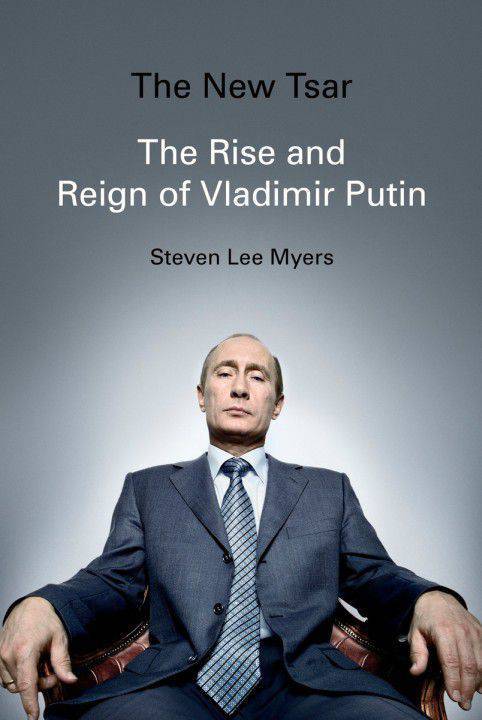 The article by the professor is largely a compilation of the opinions of several Western experts, historians and correspondents of newspapers who wrote about Russia: Marvin Kalb, Walter Lacker (author of the famous book “Putinism”) and, finally, the aforementioned Stephen Lee Myers.

Walter Lacker, for example, believes that the Russian leader’s way of thinking can be understood through the lens of Russian philosophy.

Lacker is not sure that Putin is among the adherents of the Eurasian idea, which Mr. Dugin shares in Russia, but the expert has no doubt that the ideas of Dugin mentioned are popular among some Russian military. On the other hand, the historian recalls that in June, 2014, Dugin was fired from the university. The reason was the publication on the Internet of one scandalous video on the Ukrainian theme. The fact is that Dugin accused the Russian president of “pathological indecision”.

Lacker dug and deeper. According to some reports, Putin loves Ivan Ilyin: the Russian president quotes his works and even advises them to read to the governors. Moreover, according to the historian, Putin organized his reburial in one Moscow monastery. Again, the scientist is not entirely clear what ideas Ilyin Putin likes. The historian recalls that in December 2014 of the year, speaking before the parliament, the president voiced Ilyin's call for "freedom for the Russian people, freedom for all of us: freedom of faith, search for truth, creativity, work and property."

The book “The New Tsar” by Stephen Lee Myers is not Putin’s first biography, the author recalls, but this is “the most convincing of such publications”.

Myers thinks that in the first years of his presidency Putin was genuinely intent on bringing Russia closer to the West. He went to the United States to express condolences after the September 11 attacks, he closed military bases in Cuba and Vietnam, he even made the Secretary of Defense to put up with the US military bases in Central Asia. And he was ready to accept the existence of the NATO bloc. “We do not see tragedy in its existence,” he said in 2001 year. Later, Putin gave the go-ahead to the spans of NATO aircraft into Afghanistan through Russian territory.

Putin’s trouble is that he is “bronzed.” Myers considers this expression national, Russian. According to him, in Russia this verb speaks about politicians who have become too arrogant. Putin’s mentor, Anatoly Sobchak, once told Putin: “Volodya, just not bronze.” And yet, Putin "bronzed", says Myers.

According to Daniel Trisman, the merit of Myers is that he was able to show: not only a number of events, but also a change in Putin’s character led to the Ukrainian crisis. Alarming trends have been noticeable for a long time. But Putin “took years,” when at last his discontent broke out. This happened only in February 2014.

The professor does not put Putin on a pedestal, but assesses as an ordinary person with his inherent flaws. However, this person “at the critical moment” made a choice and “influenced the course stories».

Thus, the topic of Putin in the West does not leave the pages of major publications and takes the time of popular programs on TV channels. About Putin speak in the USA, Great Britain, Germany, in Brussels, in Paris, write in paper newspapers and in network mass-media. Without Putin, politicians would not know what to do in the international arena, journalists would be hellishly bored, and experts in Russia would have scraped their threads with their nails, trying to invent topics for the next monograph. Putin gave work to all.

Ctrl Enter
Noticed oshЫbku Highlight text and press. Ctrl + Enter
We are
Results of the week. "Professor, his tail fell off!"Situational analysis of the death of the MH17 flight (Malaysian Boeing 777), made on the basis of engineering analysis from 15.08.2014
Military Reviewin Yandex News
Military Reviewin Google News
62 comments
Information
Dear reader, to leave comments on the publication, you must to register.