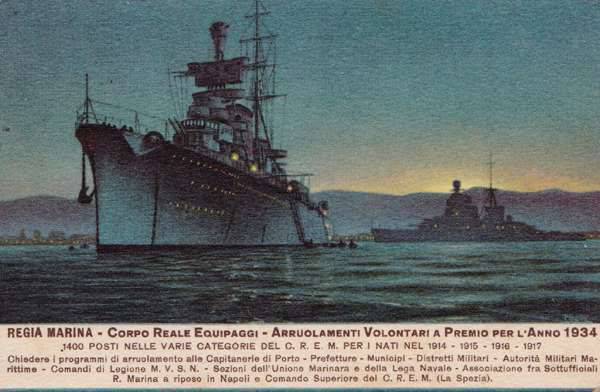 “The only successful operation of the Italian General Staff”,
- commented on his arrest B. Mussolini.

“Italians are much better at building ships than they can fight them.”
Old British aphorism.

... The submarine of the Evangelista Torricelli patrolled the Gulf of Aden when faced with strong opposition from the enemy. Because of the damage received, it was necessary to return to the surface. At the entrance to the Red Sea, the boat met the English sloop "Shoreham", which urgently called for help.

Torricelli first opened fire from its only 120-mm gun, hitting the sloop with a second projectile, which was forced to retreat and go to repair in Aden.

Meanwhile, an Indian sloop and then a division of British destroyers approached the site of the ensuing battle. Nineteen 120-mm and four 102-mm guns plus many machine guns turned against the only cannon of the boat.

The boat commander Salvatore Pelosi took the fight. He fired all the torpedoes into the destroyers Kingston, Kandahar and Khartoum, while continuing to maneuver and conduct an artillery duel. The British dodged torpedoes, but one of the shells hit Khartoum. Half an hour after the start of the battle, the boat received a shell in the stern, which damaged the steering device and injured Pelosi.

After some time, the Evangelista Torricelli gun was broken by a direct hit. Having exhausted all possibilities for resistance, the commander ordered the ship to sink. The survivors were taken aboard the destroyer Kandahar, and Pelosi was met by British officers with a military salute.

From the board of the Kandahar, the Italians watched a fire break out on Khartoum. Then the ammunition detonated, and the destroyer went to the bottom.

Khartoum (1939 built, the displacement of 1690 tons) was considered the newest ship. The case when the submarine drowns the destroyer in an artillery battle has no analogues in the sea stories. The British praised the valor of the Italian submariners. Commander Pelosi was received as a senior naval officer in the Red Sea by Rear Admiral Murray.

In addition to the losses suffered by British ships, the British launched 700 shells and five hundred machine gun stores to sink one submarine. “Torricelli” went under the water with a waving battle flag, which can be raised only in full view of the enemy. Captain 3-rank Salvatore Pelosi was awarded the highest military award of Italy, "Medal d'Or Al Valor Military" (Gold Medal for Military Valor).

The aforementioned “Kandahar” did not long ply the seas. In December 1941, the destroyer hit a mine near the Libyan coast. Together with him went to the bottom of the light cruiser "Neptune". The other two cruisers of the British strike force (the Aurora and the Penelope) also hit mines, but were able to return to base. 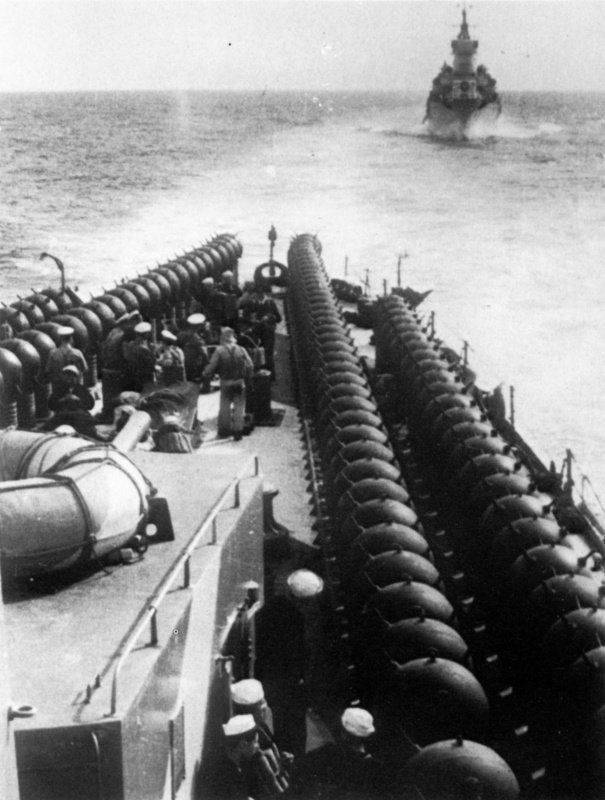 Light cruisers "Duke d'Aosta" and "Eugenio di Savoia" put up a minefield off the coast of Libya. Total for the period of hostilities Italian Navy warships put on communications in the Mediterranean 54 457 min

The descendants of the great Marco Polo fought around the world. From the icy blue of Lake Ladoga to the warm latitudes of the Indian Ocean.

The two sunken battleships (“Valiant” and “Queen Elizabeth”) are the result of the attack of the “MAS Decim” swimmers.

The first one fell victim to sabotage (a boat with explosives). “Neptune” hit the mines. "Manchester" was the largest warship of all ever sunk by torpedo boats. “Cairo”, “Calypso” and “Bonavevencher” were torpedoed by Italian submarines.

400 000 gross registered tons - this is the total “catch” of the top ten Regia Marina submariners. In the first place is the Italian “Marinesco”, Carlo Fezia di Cossato with the result of 16 victories. Another ace of the submarine warfare, Gianfranco Gazzana Prirodzha, sank 11 transports with a total displacement of 90 thousand grt.

The Italians fought in the Mediterranean and Black Seas, off the coast of China, in the North and South Atlantic.

According to official figures, Regia Marina sailors secured dozens of convoys delivering 1,1 million troops and 60 thousand Italian and German trucks and tanks to North Africa, the Balkans and the Mediterranean islands. The return route brought precious oil. Often, cargo and personnel were placed directly on the decks of warships.

And, of course, the golden page in the history of Italian fleet. Tenth assault fleet. Fighting swimmers of the “black prince” Valerio Borghese is the first naval special forces in the world that terrified opponents.

The British joke about “Italians who do not know how to fight” is fair only from the point of view of the British themselves. It is obvious that the Italian Navy, both in quantitative and qualitative terms, was inferior to the “sea wolves” of Albion. But this did not prevent Italy from becoming one of the strongest sea powers and leaving its unique imprint in the history of naval battles.

Anyone familiar with this story will pay attention to an obvious paradox. The bulk of the victories of the Italian Navy came in small ships - submarines, torpedo boats, and man-torpedoes. While large combat units did not achieve much success.

The paradox has several explanations.

First, cruisers and battleships of Italy can be counted on fingers.

Three new LCs of the “Littorio” type, four upgraded battleships of the First World War, four TKRs of the “Zara”, “Bolzano” type and a pair of first-born “Washingtonians” (“Trento”).

Of which only Zara and Littorio + ten light cruisers, the size of the destroyer leader, were real combat-ready.

However, even here there is no need to speak about the lack of success and complete uselessness.

None of the ships listed was moored. Battleship Vittorio Veneto performed 56 combat missions during the war years, having fought 17 970 miles. And this is on the limited “patch” of the Mediterranean theater of operations, in the presence of a constant threat from under the water and from the air. Regularly falling under the blows of the enemy and getting damage of varying severity (the battleship spent on repairs 199 days). While he still managed to live to the end of the war. 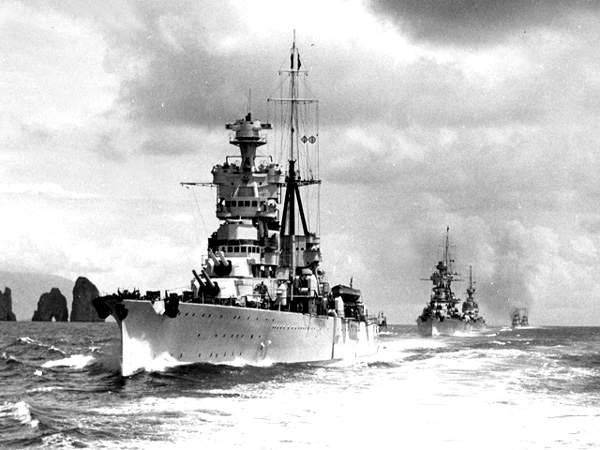 It is enough to trace the combat path of any of the Italian ships: there is an epic event or a famous battle in each line.

“Shot at Calabria”, a fight with escort Espero, a shootout at Spartivento, a fight at Gavdos and a battle at Cape Matapan, the first and second battles of the Gulf of Sidra ... Salt, blood, sea foam, shooting, attacks, combat damage!

What are those who managed to take part in so many vicissitudes of this scale! The question is rhetorical, does not require an answer.

In fact, the forces of the opponents turned out to be approximately equal! Italians did without Tsushima. The main part of the battles ended with a tie.

The tragedy at Cape Matapan was caused by one and only circumstance - the lack of radar on the Italian ships. British battleships invisible in the night approached and shot three Italian cruisers at close range.

This is the irony of fate. In Gulemo Marconi's homeland, not much attention was paid to radio engineering.

Another example. In the 30s. Italy held the world speed record in aviation. Which did not prevent the Italian air force from being the most backward air force among the Western European countries. During the war years the situation did not improve at all. Italy had neither the worthy Air Force nor naval aviation.

So is it any wonder that the German Luftwaffe achieved more success than the Italian sailors?

You can still remember the shame in Taranto, when low-speed "shelves" for one night knocked out three battleships. The fault lies entirely with the command of the Italian naval base, which was too lazy to tighten the anti-torpedo network.

But the Italians were not alone! Episodes of criminal negligence took place throughout the entire war - both at sea and on land. Americans - Pearl Harbor. Even the iron “Kriegsmarine” fell into the mud with its Aryan face (the battle for Norway).

Well, the Italians were almost unlucky in that fight. Just as unlucky British “Hood” in a battle with LC “Bismarck”. But this does not give grounds to consider the British as worthless sailors!

As for the epigraph to this article, we can doubt its first part. The Italians know how to fight, but at some point they have forgotten how to build ships.

Not the worst on paper, the Italian “Littorio” has become one of the worst ships in its class. The second since the end of the high-speed battleships ranking, in front of the deliberately discounted “King George V”. Although even the British battleship with its shortcomings, it is possible to furnish the Italian. Radar not. Fire control systems at the level of Perovoi world. The picky guns beat like a hit.

The first of the Italian “Washingtonians”, the cruiser “Trento” - a terrible end or horror without end?

Destroyer "Maestrale" - which became a series of Soviet destroyers of the project 7. Our fleet had enough grief with them. Designed for the “greenhouse” Mediterranean conditions, the “sevens” simply collapsed in the conditions of northern storms (the death of the destroyer “Smashing”). Not to mention the flawed concept of “everything in exchange for speed”.

Heavy cruiser type “Zara”. They say the best of the “Washington cruisers”. How is it that the Italians for once got a normal ship?

The answer to the problem is simple. “Pasta” did not care at all about the cruising range of their ships, rightly believing that Italy is located in the center of the Mediterranean Sea. What do you mean - all the bases nearby. As a result, the cruising range of the Italian ships of the selected class, compared with ships of other countries, was less than 3 — 5 times! This is where the best security and other useful qualities come from. 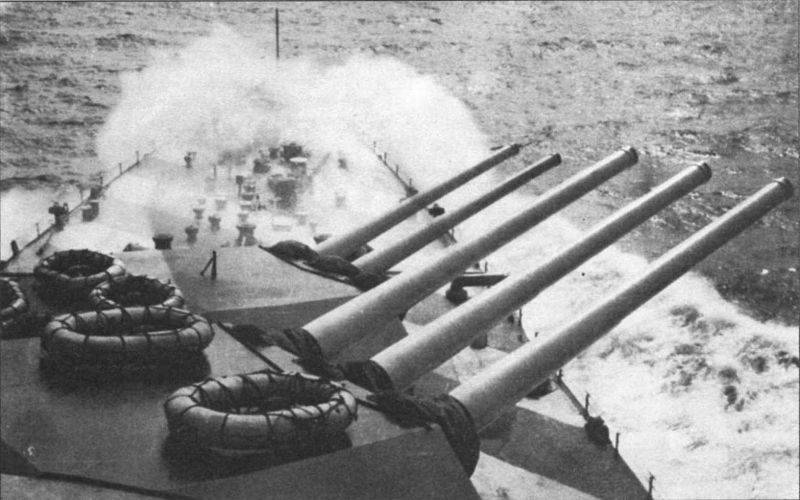 Ctrl Enter
Noticed oshЫbku Highlight text and press. Ctrl + Enter
We are
From assassination to execution. The path to the death of Benito MussoliniThe feat of the submarine "Evangelista Toriccheli" in the Red Sea
Military Reviewin Yandex News
Military Reviewin Google News
47 comments
Information
Dear reader, to leave comments on the publication, you must to register.