- All this is true, but it’s known that in his entire life he has sold only one painting. And your father, to perpetuate his tragic genius ... has already sold two.
"How to steal a million", 1966 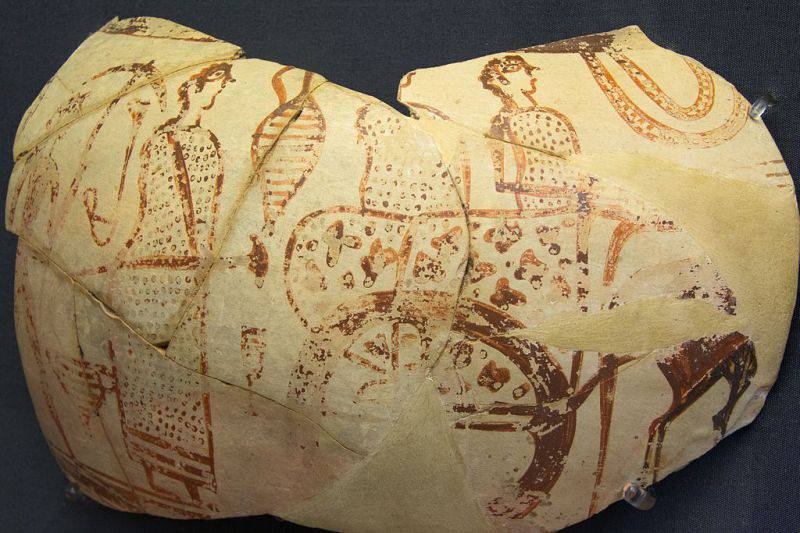 Part of the crater with the image of the chariot and the soldiers. Find in the tomb number XXUMX, Enkomi, Cyprus. 67 Dating - 1400 BC. Inaccuracy of everything in 1350 years! (British museum)

There are a lot of methods of absolute dating today. So if you are not satisfied with one method, you can check it with two or three. The most common is radiocarbon analysis. Many have heard about it, but how long have it been used, and what is its essence? It was discovered in the 40 years of the twentieth century. And he was offered the first time by a professor at the University of Chicago, Willard Frick Libby. In 1960, for that, he won the Nobel Prize.

Well, and its essence is based on ... the work of the school electroscope! As is known, this is a metal rod to which light leaflets are attached. If you touch it with something electrified, they will receive the same charge and push away from each other. But when the radioactive element is brought to it, the electroscope is discharged. At an altitude of five kilometers, it is discharged even faster than at sea level, which proves that invisible cosmic radiation is poured from space to Earth. On Earth, when it enters the atmosphere, it causes changes in atoms. Thus, carbon irradiation forms carbon-14. It differs from the usual one in that it has two more neutrons in its core. It is estimated that 7 kg of the C-14 radiocarbon annually arises in the Earth’s atmosphere and the same amount decays. It is formed at an altitude of 15 km, is oxidized by oxygen in the air and is dispersed in the atmosphere. Then he gets into the plants. Plants eat animals, and so it falls into them. Man eats both animals and plants, therefore, he also accumulates. But as soon as an object of nature dies, the carbon accumulates in it ceases and begins to decay. The decay rate is absolutely certain: 5730 years is the period of its half-life. It will take more time - carbon will be less, and vice versa. In general, you only need to measure how much carbon C-14 is left in one or another object, which archaeologists have found and ... "it's in the bag." That is, we will know how many years have passed since the death of a living organism until the present. There are special meters that allow you to measure residual carbon. They are now available in many cities of our country. 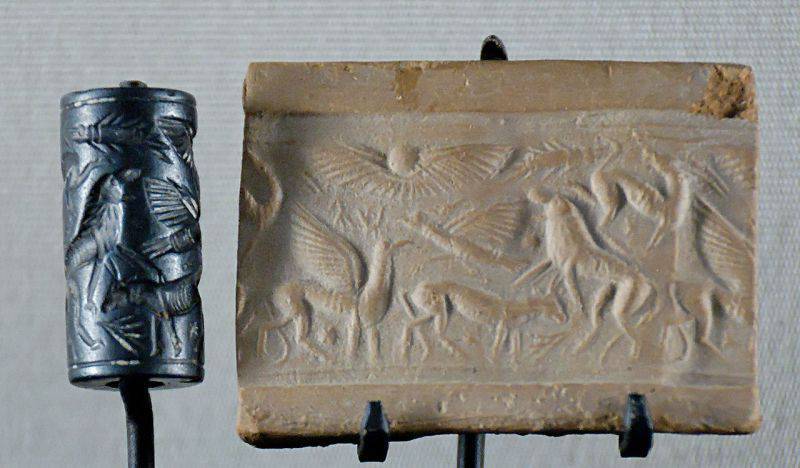 Cylindrical seal from Crete. You can also find out the age by the stone itself, but it is easier to do it by its clay imprint, if only it is nearby. (Louvre)

Similarly, the age of volcanic lava can be measured in the same way. During eruption, lava containing radioactive particles is poured over long distances from the volcano. And carried ashes! Then the ash from the water hardens, the lava hardens and here we are ready to "watch of centuries." Indeed, in the ashes and lava, the disintegration of radioactive elements immediately began. Its speed is also known. Therefore, it is enough to place a piece of ancient lava or ash into a special device, and it will be known how long this eruption has been. Well, if our ancestor left traces on the precipitated volcanic dust, then we can say for sure when it was. After all, in the air containing water vapor, the ash hardens very quickly.

Next comes the geomagnetic method. Its essence is that the magnetic poles of the Earth periodically disappear and changes signs from plus to minus. And over the past four million years, it turns out, there were four major epochs of polarity reversal. Brunhes (direct), which began 700 thousands of years ago and continues now. Matuyama (reverse) - from 0,7 to 2,43 million years ago. Gauss (direct) - from 2,43 to 3,23 million years ago and Gilbert (reverse) - 3,23 to 4,45 million years ago. Each epoch has periods when the polarity changes for a shorter period - the so-called episodes. The earliest finds of ancient people fall at the end of the Gauss epoch, when in a short period of time - from 3,06 to 2,8 million ago at least four times the polarity of the Earth's geomagnetic poles changed!

A very “curious thing” is the archeomagnetic method. Its essence is that the clay can be magnetized, but it is only necessary to burn it, as if its magnetism is imprinted into it, and by its intensity one can determine the time of burning bricks or ceramics. That is why, by the way, archaeologists often rejoice in the findings of ceramics, often quite plain, more than a gold bracelet or a bronze sword. These pieces make it possible to date a particular excavated layer.

The thermoluminescence method helps to clarify C-14 and dendrochronology dating. Its essence is that if ancient ceramics or soil is heated to a temperature 400 - 500 degrees Celsius, then they will glow. And the stronger, the older this item. And modern ceramic products and the soil do not glow when heated! That is, if, as some conspiracy theorists say, many artifacts are made recently and recently buried in the ground to mislead historians (why is it incomprehensible!), Ceramics, for example, will show it instantly. Well, if there is no ceramics among the finds, it will be suspicious. Since all finds during excavations are typologized, that is, they are divided into classes, classes into types, and types into types. Finds are summarized and compared with other similar sets of things. And there are “standard” sets, which are just the most difficult to fabricate, and non-standard - which will immediately receive increased attention. But theories are built on typical artifact sets, so it does not make sense to forge unique, but devoid of ceramics. Stories about this are only for people ignorant! 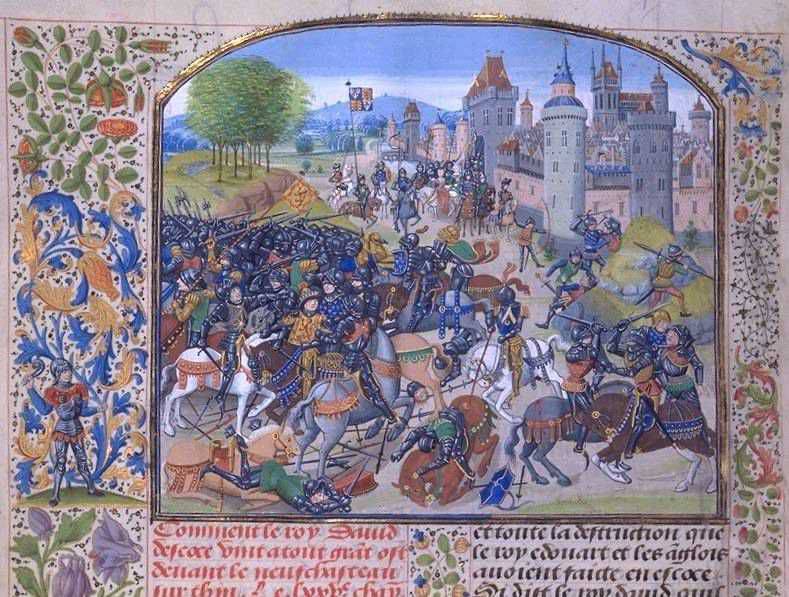 "Chronicle of Froissart." The British fight the Scots led by King David Bruce (1341). (National Library of France). Well, who will dare to fake it, or create a copy contradicting its content?

By the way, it is very difficult to fake today and ancient ink. Indeed, in the past they were made from ink nuts. Today such ink can be made, but ... they will have the entire periodic table in the radionuclide variant after heavy nuclear tests. And it is enough to subject the text to radiological analysis of the composition of the ink to find out when it is done. Comes to the aid and spectral analysis. Ancient ink on pieces of parchment give few spectral bands, but any modern fake - a lot!

It’s worth remembering 1966, the funny American comedy of the year, “How to Steal a Million?” With starring inimitable Audrey Hepburn and Peter O'Toole. So there she is to her father, artist Charles Bonnet, in great detail tells why the forgeries in marble fail. It turns out already then, in the 60s of the last century, it was very easy to expose them! 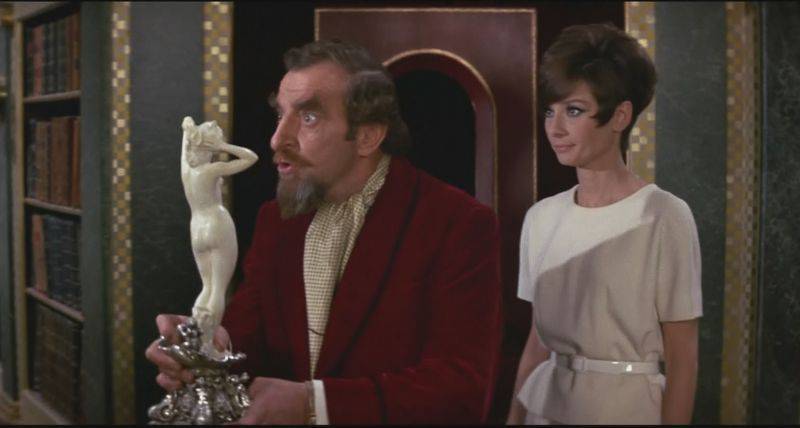 Here it is - there is the most famous "Venus Cellini", because of which its owner Charles Bonnet almost lost his "good name" and ... all his income, too. A shot from the movie "How to Steal a Million".

Relative dating is therefore called relative because it does not name exact dates, but it is also very important for archaeologists. The main methods she uses are: stratigraphy, typology, cross-dating, etc. Straigraphy comes from the word "stratum" - a layer. If several layers were found during excavations, it is clear that the deeper the layer, the older it is - that’s all the wisdom. Typological analysis compares finds from different places. If they are almost the same, then it is obvious that they were made at about the same time! 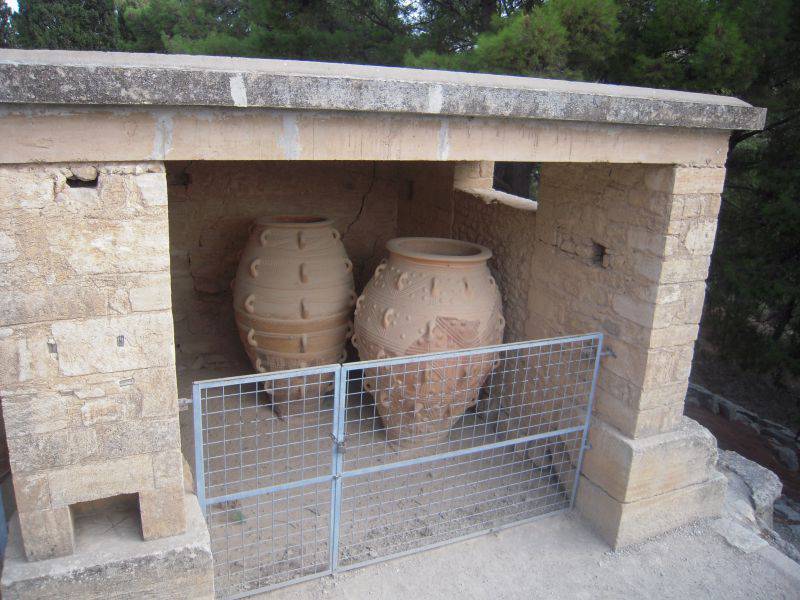 Ceramics from Knossos - such huge jugs for oil and grain. Photo by A. Ponomarev

It is very interesting to date on the change in the intensity of solar radiation (astrophysical method) and even on tape clay at the bottom of water bodies. In summer, the strip is light, because it consists of sand and dust that the wind brings, in winter it is dark, because it contains dead algae and fish. Each pair of strips is one year. Counting the stripes allows you to determine the age of the monument, if the cultural layer is blocked by a layer of tape clay. Well, the study of the ancient pollen of plants and seeds allows you to determine the ancient landscapes and ... restore the history of climate in a particular area. 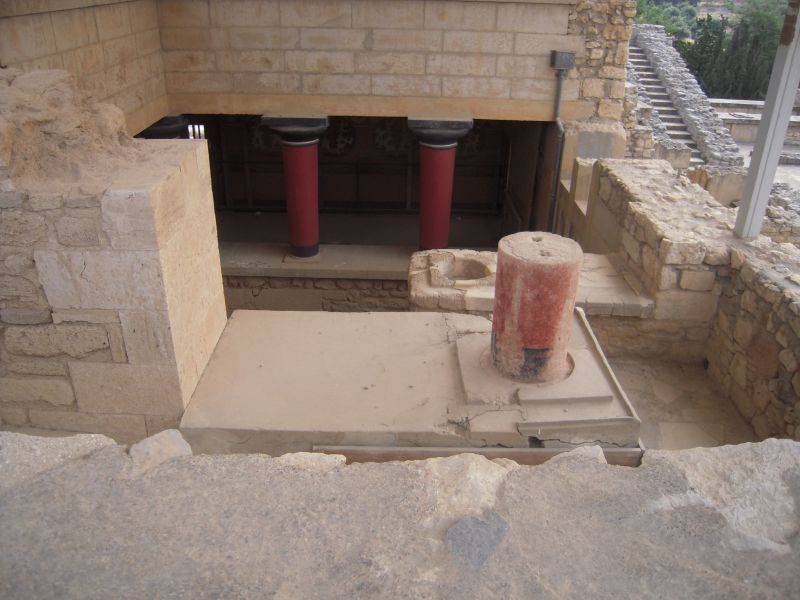 Mysterious twilight ... and there, in the earth ... finds! Photo by A. Ponomarev

And it turned out that, judging by the deposition of this very pollen, wet periods alternate with dry periods in the same way as day is replaced by night. Hence the opportunity to predict the climate for the future, and in the past to explain the causes of wars and invasions ...

Well, now the most interesting. Being, as we know, determines consciousness. That is, it is material culture that shows us the development of man in past ages. And now look and compare. In the 60 of the last century, the whole history of the Great Patriotic War fit in six volumes. In the USA, for comparison, the history of the Second World War was published in 99 volumes, and in Japan even in 110! Now, namely in May 2015, the 12-volume new edition of the history of the Great Patriotic War is completed. But then, in the USSR, the 20-volume edition “Archeology of the USSR” was prepared and published. It summarizes material from 200 years of excavation! From the Lower Paleolithic to the XIV century! Findings in all zones of the country are considered, material on the history of the Slavs and Ancient Russia is given in detail - as they say, take it and use it, everything is described, everything is dated! The only source of this kind, and what is the volume ?! Here is something to read conspiracy, isn’t it?

The author is grateful to A. Ponomarev for the provided photographs from the island of Crete.

Ctrl Enter
Noticed a mistake Highlight text and press. Ctrl + Enter
We are
Bronze age on the island of Cyprus or "migrants are to blame for everything"! (part of 5)Belarusian wonders. Is the museum easy?
116 comments
Ad