The film "Can not forget this" 1954 year. Revived historical parallels

28 September 2015
22
Frankly, I am not a big admirer of a retrokenematograph of a sample more than 60-year-old, but the tape about which it is referred to in the material made what is called an indelible impression. Actors play - yes, directorial work - yes, but first of all - the plot, which is another proof that история - a piece thin, and even prone to repetition in very unexpected incarnations. Speech about the feature film “One should not forget about it” directed by Leonid Lukov, shot by Gorky Studio and telling about the post-war life of Western Ukraine (Lviv region). The year of release of the film on the screens of the country is 1954, but when viewing it seems that this is a stylized retro-translation of what could well be reflected in the artistic form today.


The picture, which, to put it mildly, can hardly be called widely known (although with a whole galaxy of remarkable actors: Sergey Bondarchuk, Nikolai Kryuchkov, Vyacheslav Tikhonov, Lydia Smirnova), talks about what was not generally spoken about in Soviet time. The scenario of the film is connected with the activity of foreign intelligence in the USSR, relying, in particular, on the Ukrainian nationalist underground, which operated in the western regions of Ukraine. The picture of the activities of the "asset" of the OUN, which (the "asset") used to form in the western (and not only) part of the Ukrainian SSR anti-state, Russophobic sentiments any opportunities, primarily information and disinformation opportunities. The picture of the introduction of agents of foreign intelligence services in Ukrainian universities, the media, libraries of the Soviet period - the introduction with the aim, so to speak, of deforming the foundations of understanding such concepts as the brotherhood of nations, a single common root, a single state with common goals.

The fact that the picture did not become, so to speak, the full property of the Soviet audience in those years, you can understand, if you pay attention to the Soviet ideology. The film tells about the traitors, who fuck with Western intelligence. Moreover, these people, as the authors of the film narrate with historical accuracy, acted on the territory of Ukraine for a long time, having managed to gain a foothold not in the last public roles. Naturally, the Soviet ideological machine, by definition, could not allow the viewer to get the impression of the negligent work of the special structures, and indeed that one of the Ukrainian citizens was engaged in anti-Soviet activities, and even in this matter seriously succeeded. Well, “non-politically correct”, by the standards of the Soviet period, the film, “non-political correct” ... Even more politically incorrect for perestroika and post-perestroika times, because the material gives a clear description of the activities of the OUN.

Today, the film, which has a very bright and instructive title, including for our generation, looks not only as artistic, but rather as quite documentary - with an approach to formulations and definitions that have not lost relevance for more than 60-year history (recall that the film was released in 1954 year).

Here is a text fragment of the film’s script, when the main character Alexander Garmash plays it, performed by Sergey Bondarchuk:

One of the methods of their foreign policy, they chose an underground war in the rear of the Soviet Union and the countries of people's democracy. They allocate millions of dollars to spies and saboteurs, they support and set on us traitors of all stripes, dastardly bourgeois nationalists who sold our Ukraine to the left and to the right: pan-Polish Poland, and Kaiser, and Hitler's Germany. Who do they rely on? What is their soul? The miserable theories of the cursed Grushevsky’s people — the executioner, dressed up as a historian, a petty sharper who juggled with facts, diluting them with a poisonous saliva of a rabid nationalist dog! Despicable hirelings whose fathers are still Taras Shevchenko denounced with the words:

(...) That is why the instigators of the new war are afraid of the collective word of the fighters for peace! That is why the very idea of ​​negotiating the peaceful resolution of all controversial international issues causes them to feel fear and rage.

Let those who are carried away by the dangerous game, which they call the Cold War, understand that we are upholding the world, not because we are weak, we are protecting the world, because we are strong, because we believe in our future, in our creative work, in the happiness of our children. We have no fear. Our strength was tested not at parades, but among the stones of Stalingrad, and today we speak to those who have a short memory, who, saber weapons, threatens the world with war, we speak simply, humanly, calmly, but menacingly: “Stop!”

As they say, the full range of parallels with today's day. If the text replaces the Soviet Union with Russia, and, perhaps, omit the term “bourgeois” in the definition of Ukrainian nationalists, then the relevance is simply 100-percent!

And the poems of Rostislav Danchenko (performed by Vyacheslav Tikhonov), which today may look somewhat naive in comparison with the works of the Maidan about “Vatu” and “Colorado”, nevertheless, also allow us to draw certain parallels:

I love Ukraine more and more,
Forever and everlasting,
And nothing compares to her,
Ancient, wise and inspirational.
We swore allegiance with her,
Only with her, for her you live,
No closer, no one dearer
Ukraine, that in our blood.
Only her in the hour of reflection, I see
Than ancient than everlasting
The closer ...

Ancient Ukraine - without a hint of the mention of the unity of the Russian, Ukrainian and Belarusian people - is it not the same thesis that is being discussed among its neighbors today. 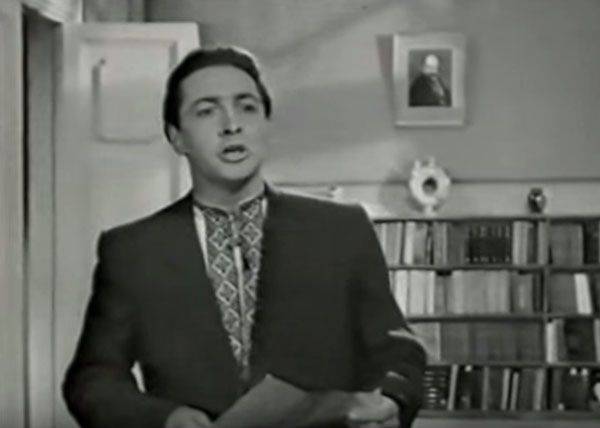 And, as they say, it’s still better to see it once (of course, for those who have not watched the movie yet) (posting on YouTube on RVISION channel):


The documentary relevance of the movie is amazing. And it adds relevance to the fact that the director Leonid Lukov shot the film based on real events. Yaroslav Galan, a Ukrainian Soviet writer, became the prototype for Aleksandr Garmash for screenwriters. From the pen of his book there were books about the work of OUN with foreign sponsors, as well as works of a clear anti-fascist orientation. 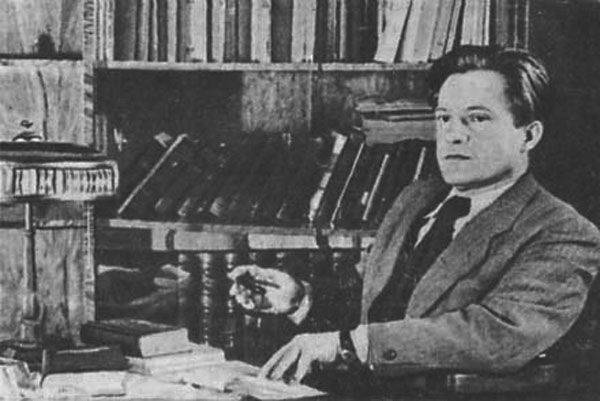 From the essay (1945) of Yaroslav Galan “What is not the name” (about the criminal activities of the OUN fighters):

A fourteen year old girl cannot calmly look at the meat. When in her presence they are going to fry cutlets, she turns pale and trembles like an aspen leaf.
A few months ago, on a sparrow night (according to Slavic beliefs - the night of rampant evil forces - note "VO"), armed people came to a peasant hut, not far from the city of Sarny, and stabbed their hosts with knives. The girl, wide-eyed with horror, looked at the agony of her parents.
One of the gangsters put a knife edge to the child's throat, but at the last minute a new “idea” was born in his brain.
- Live to the glory of Stepan Bandera! And so that something good does not die of hunger, we will leave you groceries. Well, boys, chop her pork! ..
The “lads” like this offer. They dragged plates and bowls off the shelves, and a few minutes before the girl, numb with despair, grew a mountain of meat from the bodies of her father and mother bleeding to death ...
That’s what the gangster geeks who call themselves “Ukrainian nationalists” —Banderovites, Bulbovs, Melnykians — have come to. Their activities in recent years have been a continuous chain of wild atrocities, monstrous unbridledness and unsurpassed provocations.

In the spring of 1944, the Red Army in its liberation campaign crossed the river Zbruch. At about the same time, Bandera "delegates" came to the German security police and the SD of the Galicia district with a statement that the representative of the so-called "Central OUN leadership - Bandera" Gerasimovsky wanted "on behalf of the political and military sector of the OUN" to discuss with the Gestapo closely cooperation against "Bolshevism" in the new conditions.

Gerasimov:
“We need to put an end to that mistake, as if the Bandera groups consider Germany to be their adversary. The Bandera group says that the Ukrainians (read: Ukrainian nationalists. - Yaroslav Galan) would be satisfied with the state form modeled on the protectorate, but this step towards the independence of Ukrainians was not carried out by Germany: therefore, the Bandera group bound by the idea (hear: “the idea” - Yaroslav Galan), is forced to work illegally for his political goal. But nevertheless, in illegal work it is strictly stipulated not to act against Germany, but to prepare for a decisive struggle against the Russians. This was convincingly proved by the fact that the Bandera group began building, arming and training their combat units only in February of the 1943 year, that is, at a time when, as a result of the events on the Eastern Front, it was necessary to state that the Germans would not be able to defeat Russia it seemed at the beginning of the war. ”

Ukronationalists Galan could not forgive this and similar to him the debunking of the myth about the “patriotic” activity of the OUN-UPA. And if in the film, the hero Sergey Bondarchuk and all the anti-nationalist forces of Lviv celebrate a bright victory, and the student Danchenko (played by Vyacheslav Tikhonov) refuses his nat ideas, then everything went much more dramatic in life.

October 24 1949, Yaroslav Galan was brutally murdered by OUN in Lviv. Galan was hacked to death by an ax (in the case file, the “Hutsul hatchet”) of Ukrainian nationalist Mikhail Stakhur. Stakhur was hired by Hilariy Lukashevich (pseudonyms Yarko, Slavko) - the son of a Lviv Uniate priest who studied at a local university and was fond of the works of Grushevsky (this was taken from him as Danchenko). Stahur and Lukashevich were let in by the housekeeper Galana, who knew the young people in the face, because both of them had been trying to find favor with the writer for a long time and often appeared in his house.

The customer of Galan’s murder, according to the investigation, was made by the leader of the Lviv OUN underground, who acted with the agent's “call sign” Bui-Tour - Roman Shchepansky (also the son of a priest-uniate). At its beginning, the Western Ukrainian nationalists killed more and more 50-ti Orthodox priests in the region. The murderer of the writer Yaroslav Galan was punished after 2 years after committing the crime, for a long time hiding from justice in the woods. The military tribunal of the Carpathian Military District sentenced Stakhur (pseudonym Stefko) to the death penalty - the death penalty through hanging. The execution took place on 16 on October 1951 of the year. Earlier in March 1951 year to shot Ilariy Lukashevich was sentenced. Incidentally, these were extraordinary sentences, since the practice of hangings (and the death penalty as such) was not used in the USSR for a long time and was maintained only exclusively for odious criminals. Stahur (killed, consisting in the OUN, a total of 9 residents of Lviv region) and Lukashevich were recognized as odious.

Separately, it is worth paying attention to the fact that the decisions of the Lviv Prosecutor’s Office Stakhur and Lukashevich in 1994 and 1996, respectively, on the basis of the Ukrainian law “On victims of political repression” were recognized (attention!) "Undeservedly convicted" ... , it was not before that - they say, why “go into the internal affairs of Ukraine” ... Or didn’t you see the film’s Russian Ambassador Leonid Lukov? ..

Ctrl Enter
Noticed a mistake Highlight text and press. Ctrl + Enter
We are
My grandfather's front-line letters (part 2)Father told
22 comments
Information
Dear reader, to leave comments on the publication, you must to register.