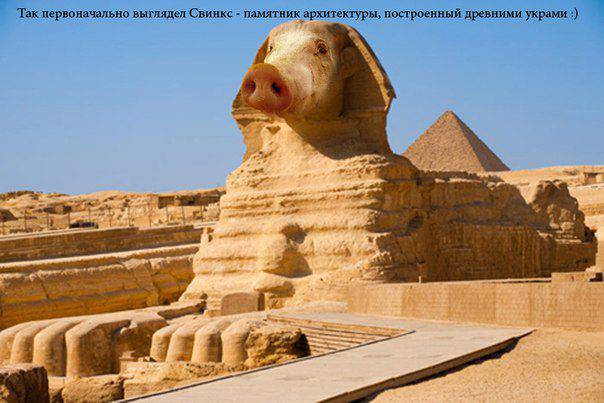 In fact, Ukraine is a world superpower and determines the geopolitical agenda in the entire human (inhuman, by the way, also) civilization. Any meetings between the leaders of the USA, Great Britain, France, Germany, Japan, Honduras and Gabon begin with a global question: Chetamuhokhlov? In no other country in the world does the preparation for the next UN session evoke so many emotions, heated discussions with personalities and even drunken brawls, as in Ukraine. [/ center] Residents of many developed countries, accidentally outstripping Kiev in terms of living standards (the same Gabon), do not even know where this UN is located, and wonder why in the news show some Korean with a strange last name Pangemun? The European superpower is another matter.

It is Kiev that forms the UN agenda and is the pioneer of the necessary reform of this organization. The Foreign Minister of a superpower with a typical Aryan name Klimkin announced the coming changes in the United Nations. It turns out that the UN structure does not at all correspond to modern realities, since it does not take into account the emergence on the world stage of the leading force of modernity, which is rapidly and inevitably integrating into the EU, despite the timid protests of Muslim European majority. Take the same Security Council. Some insignificant political dwarfs in the face of the Russian Federation and China can impose a veto on everything. Did they have a revolution of dignity? What can they boast of at all, except for the “Great Wall of China”, which cannot be compared with the “Great European shaft of Arseny,” and two dogs in space? It was Ukraine who first launched the man to the moon. Just about this, few people know. And after the most modern army was created in Europe, everyone is forced to reckon with Kiev. Moreover, Ukraine is de facto a nuclear power, because one of the fifteen reactors can explode at any time, and in such a way that it will not seem to anyone much. The tests at the Chernobyl nuclear power plant, conducted in the 1986 year, have clearly proven this.

Therefore, Kiev should be given the status of “received” by the UN Security Council with the aim of deterring Russia's aggression, which represents the main threat to civilization. What is "received" and how it differs from the "member", Klimkin did not specify. But the head of the foreign ministry clearly and unequivocally stated the need to do something with the Ukrainian member before Putin’s meeting with Obama, scheduled for September 28. Time does not wait. The fighters Motorola and Givi, in close cooperation with the regular units of the Russian special forces, invaded Syria. The world was on the verge of a third world war. The jackals howled, stopped the six-day hunger strike in the detention center of the Security Service of Ukraine Mosiychuk. And all it takes is to nip the imperial ambitions of Moscow, 1254 Javelina. Give us 1254 Javelina and you can forget about the Russian threat forever.

None of the countries in the world, except the USA, write the theses of speeches to Obama during negotiations with Putin. Only in Ukraine in all forums does the work tirelessly boil: America’s coordinated position on Crimea is being worked out, proposals are being developed to strengthen the sanctions against the Kremlin, and a clear and understandable analysis is given of modern strategies for the development of civilization. Everyone recommends that Obama be aggressive, especially not to stand on ceremony with the Kremlin dwarf, since Russia is on the verge of collapse and we need to think about what Ukraine will do with the nuclear potential of the Russian Federation. Any patriotic blogger is aware of exactly how to behave with Putin, which development scenario is optimal. Without exception, everyone knows that Putin has two scenarios left. Both end with its inglorious end.

Even professors of sociology, having distracted themselves from urgent matters at the dacha, consider it appropriate to use one careless offer to describe the prospects of the Kremlin. Type "Putin sends militants to Syria to clean up the Donbass and give it to Ukraine under the control of the local oligarchy, and Obama is aware of this and the essence of the world behind the scenes." In my entire life in journalism, I have not met so many “experts” thoroughly versed in the subtleties of the behavior of world leaders who know exactly how to solve the key points of world crises, when to start a military operation, when to stop. I involuntarily feel like a provincial who suddenly got into a meeting of a club of elected representatives of a superracial who dictated their rules to the rest of the world. Naturally, I am not given to understand all the nuances of the upcoming UN meeting. They are available only to moderators of patriotic forums, office plankton and representatives of the Javelin sect. But I understood: it was at the UN meeting with the participation of Klimkin that the fate of the rest of humanity would be decided. It simply cannot be otherwise, since the key to the new world order lies in the pocket of the pants of a modest person in a baggy suit with an extremely ambiguous expression on his face. Some consider Klimkin an idiot, but in reality we are the creator of civilization. There is only one superpower in the world that can match Ukraine. This is, of course, America, whose main mission is to protect the peace and security of Kiev as the apple of an eyeball. One involuntarily feels pride in a great nation that has conquered space and almost the entire parallel universe.

Ctrl Enter
Noticed oshЫbku Highlight text and press. Ctrl + Enter
We are
The structure of world dominationMilitary reform as an integral part of the security concept of the Russian Federation: Systematic dynamic assessment
Military Reviewin Yandex News
Military Reviewin Google News
61 comment
Information
Dear reader, to leave comments on the publication, you must to register.