October 5 2015
37
About the shields in the Iliad says a lot and with taste. The mere description of the shield of Achilles is worth something. But we must not forget that the Trojan War was somewhere in the range of 1250 - 1100. But the whole epoch of the Minoan period, the Cretan-Mycenaean culture, the Achaean period, and the Aegean civilization (in fact, it is all the same!) Began earlier, and ended somewhat later than this time. Therefore, the story of the most common round shields around the world should begin with the fact that such round shields in the Aegean region began to be used approximately around 1300 BC.

Moreover, all-metal (bronze) shields of this time are known from finds in Central and Northern Europe, but not in Hellas and in Asia Minor. But since well-preserved round bronze shields are found there, their use is considered completely possible by the warriors of the Achaean world. 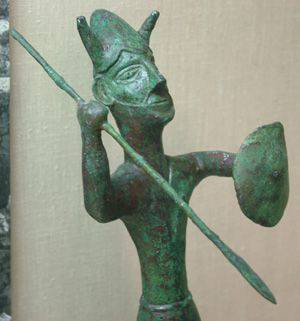 Statuette of a god or warrior from Enkomi, Cyprus (around 1200 BC). Museum in Nicosia.

Some of the golden plaques, buttons and terracotta decorations from royal graves of mines in Mycenae dated 1500 BC. were interpreted by Heinrich Schliemann as miniature copies of shields. His opinion is confirmed by the finding of a large wooden object (which was assembled from many fragments) in the tomb No. XXUMX in Mycenae (near 5 BC), since it is almost certainly part of the shield. In the center of the preserved part there is a round hole, which served to fasten the handle, which was covered from the outside by a metal umbron. 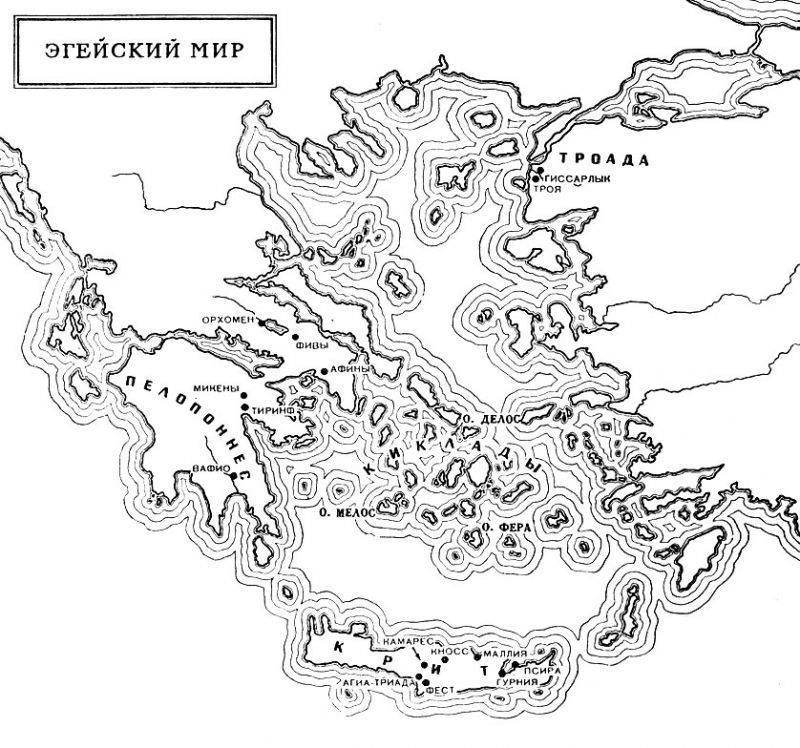 Map of the Aegean World.

But it was in this part of the world that the so-called “proto-Dipilon” shield, which looked like a huge convex figure of eight, appeared. These shields had a vertical wooden edge and a base, most likely woven from a wicker and covered with a bull skin. 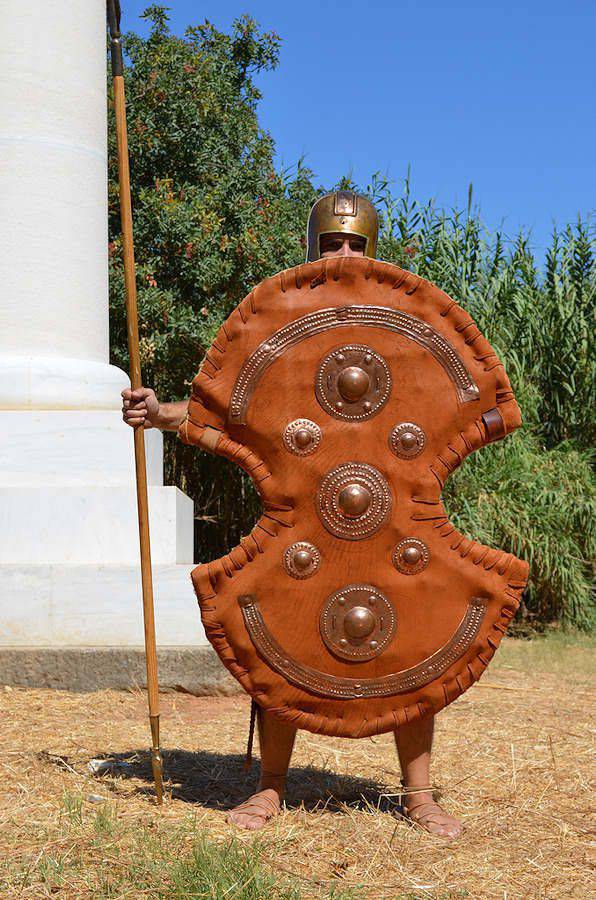 Dipilon shield of leather. Reconstruction. At the beginning of the VIII century. BC. in Greece, there were two main types of shield: oval, with grooves on both sides - this type is usually called dipilonsky, after the name of the cemetery in Athens, where they found many images of such shields, and round, with a handle in the center. A dipilonian shield almost certainly goes directly to the figure of eight Mycenaean shields.

When weaving the rods could pass through holes in this wooden frame, although this is nothing more than a hypothesis. In this case, the strength characteristics of such a shield increased even more, and he could have been covered not with just one skin, but with a tire made of several leathers that were cut and joined together. In this case, the strength of such a shield could well correspond to the strength of 19th century kafir-zulus shields, which were made of rhinoceros and hippopotamus and withstood a clawed lion-claw strike! 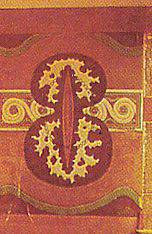 Images of these shields abound. These are frescoes from the palace in Knossos, and Minoan vases and even figures of lion hunters on the blade of a magnificent bronze dagger from the archaeological museum in Athens. On this blade, by the way, there are two types of shields: “eight-shaped” and rectangular with a semicircular protrusion at the top.

Such a shield could be reinforced with metal collar along the edges and even covered with a metal sheet on top. Interestingly, in the Iliad, the main material for the Achaean and Trojan shields are tanned bull skins, reinforced with metal elements. There are images of rectangular shields quite clearly covered with the skin of a bull six outside and on the famous frescoes from Akrotiri from the island of Santorini. 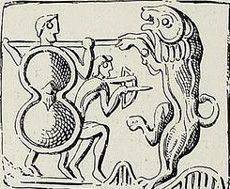 Hunting for a lion, in which an archer and a spearman with a eight-shield are involved. Seal from Kudonia, XVI century. BC. 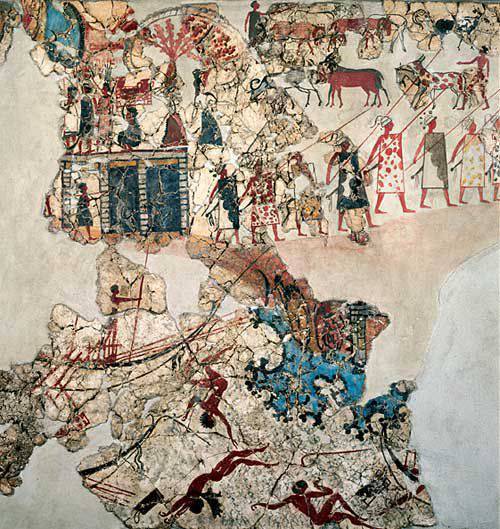 A fresco from the so-called “Western House”, from Akrotiri from Santorin Island. On the fresco in its upper part, warriors are clearly visible in helmets made of boar tusks with large, human-sized rectangular shields covered with multi-colored bull skins. Such a shield was supposed to serve the soldier as an excellent defense, but its presence speaks volumes. One soldier does not have such a shield! Only many warriors with such shields built into the phalanx make sense on the battlefield. And this means that the phalanx was already known then. By the way, long spears in the hands of soldiers confirm this hypothesis. By the way, the drawing itself is very clear, although it was painted by the artist, who lived from us in ancient times. Warriors protect the city, the women living in it, and the shepherds who drive herds to the city. At sea, we see the fleet and divers engaged in some important business. 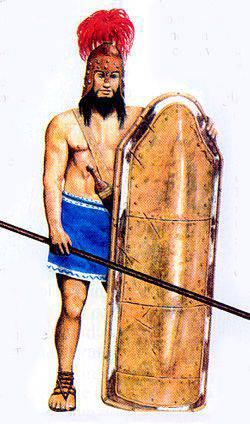 Ajax with his shield. Modern reconstruction.

Simple shields with a "tire" of a hairy skin could be significantly improved. For example, by connecting several skins to each other. This, that is, the "seven-skinned" and still covered with a bronze leaf, was the shield of Ajax Telamonid. It is believed that such a large shield will be too heavy. It is known that the average density of bronze 8300 kg / m3. Thus, with a sheet size on such a shield from 1,65 m to 1 m, a width of about 70 cm and a thickness of 0,3 mm will give us a weight of about 4 kg. The total weight of the seven bull skins is 6 kg plus 4 kg of the bronze plate, that is, the total weight of the shield will be about 10 kg. It is difficult, but possible, moreover, the Iliad stresses that this shield was heavy for Ajax himself.

The Iliad also describes the shield of Achilles, made by the god Hephaestus, and he made many images on it for the sake of beauty. Famous English scientist Peter Connolly and Italian historian Raffaele D'Amato tried to reconstruct the scenes depicted on this shield. The work was done a lot, because all on the shield of Achilles were 78 scenes, so its volume can be imagined!

For maximum accuracy of the image and copying the characteristic manner of that time, images from frescoes were used, as well as various artifacts. For example, hunting dogs are a fresco from Tirinf of the 13th century. BC er Achaean woman - Tirinf fresco of the 13th century BC er women in a chariot - a 13th-century Tirinf mural BC er priestess with a temple fresco from the 13th century Mycenae. BC er - and so on. 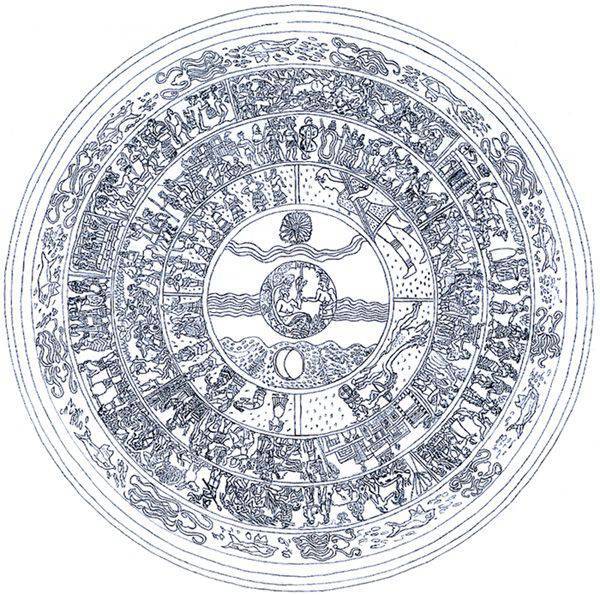 Reconstruction of the shield of Achilles.

Based on the description in the Iliad, Hector’s shield may well be imagined as an “eight-shaped” (proto-Dipilon type) of several layers of bull skin.