Made in Ukraine. Automatic rifle "Malyuk" 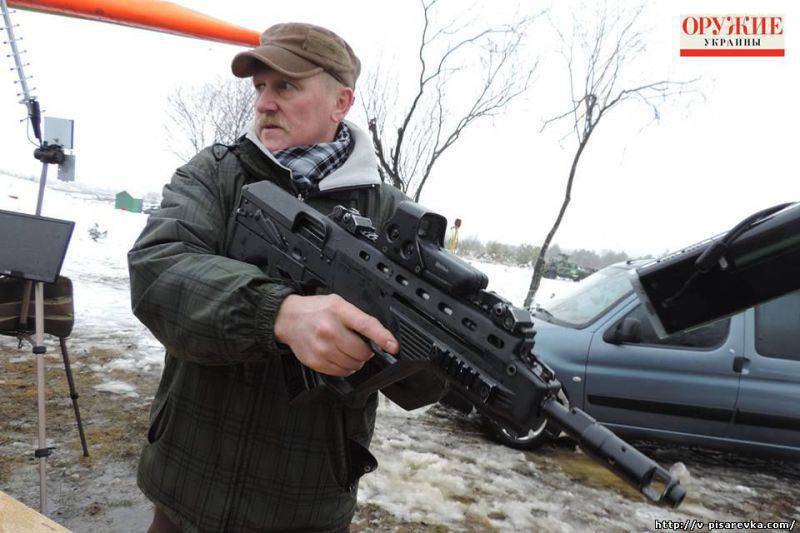 Over the past years and decades, military equipment and weapons have constantly evolved. Military necessity gave rise to new technical breakthroughs, as a result of which new types of offensive appeared. weapons, which allowed to strike from a long distance and with great accuracy. But even today, individual small arms are not an anachronism. And all because remote methods of introducing war only have an effect if the goal of the operation being carried out is to destroy the enemy’s military and industrial infrastructure. But for the final victory over the enemy, establishing control over its territories, gaining access to its industrial and raw material resources, and performing various types of combat missions, it is necessary to use infantry units entering into direct contact with the enemy. And in this case, the main character becomes a soldier with an assault rifle.

During the presentation of new firearms and weapon systems at the Ukrainian exhibition “Arms and Security” a new automatic assault rifle “Malyuk” (“Kid”) was demonstrated.

The weapon has three Picatinny rail, on which it is possible to install additional mechanical and optical devices, including handles, sights, bipods. Installation of the quick-release muffler is also possible.

Stores are inserted into a special shop shaft, which allows them to be better fixed and facilitates their connection. But at the same time, it is impossible to use disc and multi-charge stores in this case.

The rifle's guard is located above the trigger, and the translator of the fire mode is on the right rear. 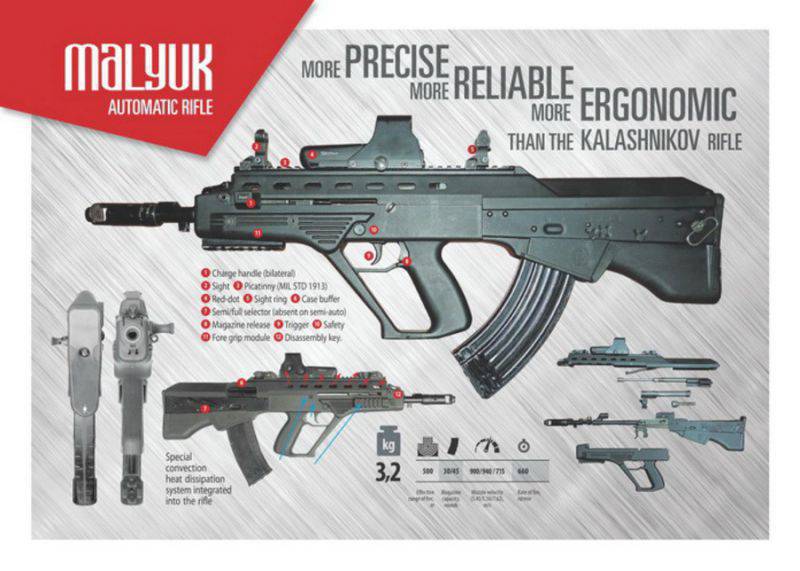 The machine "Malyuk" made chambered for 5,45 and 7,62 mm. Its length is 712 mm, while the length of the trunk reaches 415 mm. Magazine capacity - 30 cartridges. Weight with empty magazine is equal to 3,2 kg. The initial speed of the bullet reaches 900 meters per second, and the target range is equal to 1000 meters.

Work on the creation of the machine "Malyuk" began in 2005 year, as part of the AK-74 modernization project. The customer was the Security Service of Ukraine. Journalists have repeatedly said that "Malyuk" is the development of the Vepr machine, but in reality these are two completely different projects that were implemented for different customers. At that time in Ukraine, repeated attempts were made to modernize a Kalashnikov assault rifle of the “bull-pap” type. "Vepr" was also such a project, which was developed for the military department. But in 2005, it was closed. But the project implemented by InterProInvest LLC turned out to be exceptional - according to the developers, the output was not the AK-74 modernization, but the completely new Vulcan machine, which was then reborn as Vulkan-M. This machine is better known under the name "Malyuk". It embodied numerous unique design solutions. This is a new product, in which AK-74 structural elements are only partially used. The explanation is quite simple - there are no technologies for the production of barrels for small arms in the country, but at the same time there are enough stocks of Kalashnikov assault rifles on military arsenals in order to use them as donors of the barrel and some components. The rifle "Maluk" sold more than a dozen patented solutions designers. From the AK-74, in fact, there was only the barrel and receiver.

In addition to standard rounds, the machine gun can fire with NATO rounds of 5,56 mm caliber.

Practical shooting has shown that "Maluk" has a sufficiently high accuracy and accuracy of shooting. Moreover, these figures are embedded in the design of the rifle and practically do not depend on the user. Regardless of who shot at testing, a sniper or amateur, the result was high: all the bullets hit the target circuit, and half of them hit the top ten. According to the developers, this result was achieved due to improved balancing of the machine gun, in which the center of gravity is shifted to the area of ​​the rifle contour center. The effect is enhanced by the transfer of the handle, which helps to ensure minimal deviations when shooting. In addition, the return in the new product is almost one and a half times less than in the Kalashnikov assault rifle. This was achieved by optimizing the use of the energy of powder gases.

Another important point - when disassembling and assembling the machine, the aiming point is preserved. Simply put, after the assembly of the rifle there is no need to verify the sights, they will ensure maximum accuracy over almost the entire period of operation.

The high performance of the machine indicates that due to high accuracy, the consumption of ammunition is significantly reduced, and thus increases the combat ability and autonomy of the soldier. And the possibility of using night vision sights significantly increases the efficiency of the shooter in difficult conditions. 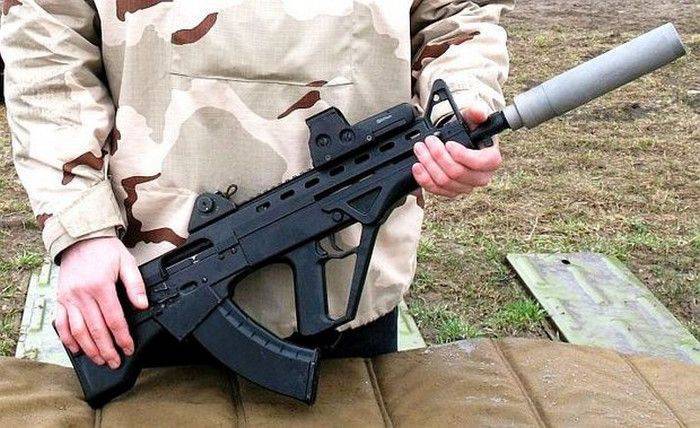 Many in the world consider the Kalashnikov assault rifle to be the benchmark for reliability. But, as practice has shown, the reliability of the AK is not absolute, and “Maluk”, according to the rifle developers, can press the recognized authority, demonstrating new heights of reliability.

The Ukrainian rifle uses a convection cooling system for the barrel, which increases its lifespan by 3 (as a result of a decrease in the amplitude of temperature fluctuations, the load of the barrel material decreases). In addition, with excessive overheating of the trunk, the possibility of “spitting” due to the unique air-cooling system of the trunk is excluded. The machine can withstand intense fire without prolonged maintenance. The design and layout of the machine provides a smaller number of points inside the mechanism of dirt. Thus, the machine is ready to use at any time, regardless of external factors. Due to high reliability, the cost of automaton repair and maintenance is reduced, optimizing, ultimately, the cost of logistics.

The machine "Maluk" is also convenient to use. Due to the bullpup layout scheme, the weapon’s dimensions have been reduced without affecting its tactical and technical characteristics. In addition, this scheme provides a more convenient "butt" rifle when used from any position. By installing special corrective nozzles, the weapon is adapted to the anatomical features of the user. It turns out the so-called effect of "continuing the hand", in which the shooter feels the machine part of himself. Taking into account the installation of three Picatinny rails for additional devices, the “Malyuk” weight is less than a Kalashnikov assault rifle.

The machine can use both right-handed and left-handed. The ergonomic cocking handle does not move when firing, so the possibility of injury to the shooter is excluded. It can be operated with one hand: unlock the fuse, change the magazine, shoot and reload. After use, an empty magazine drops out when you press the eject button under its own weight. This ensures fast reloading of weapons.

It is also important that the "Maluk" has an organic form and is smaller in comparison with the Kalashnikov machine gun. This plays an important role for paratroopers: the shape and size of the machine ensure its safety in landing.

Ultimately, the ergonomics of the machine gives it certain advantages: quick reloading, transfer to the fighting position, translation for shooting from different positions provide additional time, which is very important in combat conditions. Due to the optimal weight, shape and balance, the risk of injury to the shooter is reduced. And the ability to install additional devices increases the effectiveness of the use of these weapons.

Thus, Ukrainian engineers say that the Ukrainian “Malyuk” machine, in the development of which all modern requirements were taken into account, can become a worthy competitor of such machines as the Austrian Steyr AUG A3, the Israeli Tavor TAR-21, and the Belgian FN F2000. Maluk is not inferior to them in its characteristics, so it can have a decent export potential, especially since its cost is much lower than that of competitors.