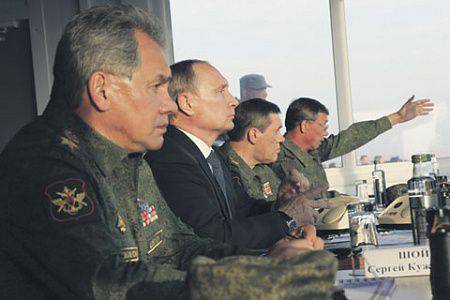 Last Sunday, the Center-2015 strategic command and staff exercise (SKSHU), which took place from September 14 at several ranges of the Central and Southern Military Districts, ended. On the penultimate day of the maneuvers, Supreme Commander Vladimir Putin, Defense Minister, Army General Sergey Shoigu, Chief of the General Staff, Army General Valery Gerasimov, who visited the Donguzsky training ground in the Orenburg Region, observed the progress of one of the exercise stages.


The top leaders of the Armed Forces of Russia played out a tactical episode of the destruction of a large armed terrorist group. It is noteworthy that a powerful attack on the enemy was caused by more than 100 airplanes, dozens of rocket troops and artillery units, and then an airborne assault force was landed on standard equipment of about one parachute regiment. Such a scale of hostilities pointed to the working out of the complete liquidation of the group of “terrorists” comparable in size to the motorized infantry division.

This is probably not a simple coincidence with the statement made on the same days by Syrian Foreign Minister Walid Muallem, who told reporters that Damascus, if need be, would ask Russia to send soldiers to fight shoulder to shoulder with the Syrian military. And the Syrian ambassador to the UN, Bashar Jafari, called on Russia to inflict airstrikes on troops of the "Islamic state" (IG), a terrorist organization banned in our country. To which the press secretary of the Russian president, Dmitry Peskov, responded as follows: "If there is an appeal (Syria. -" NVO "), then within the framework of bilateral contacts, as part of a bilateral dialogue, it will naturally be discussed and considered." In general, the scenario, played out at the Center-2015 exercise, is quite suitable for organizing actions for the destruction by our troops of numerous and well-armed IS formations attacking the positions of the Syrian army. The only question is when will the decision on the participation of our troops in military operations on Syrian territory be made and whether it will be taken at all?

The completed maneuvers, the largest this year, involved about 95 thousand troops, more than 7 thousand weapons and ground military equipment, 170 aircraft and 20 ships. Including in the European part of Russia, at the training grounds of Totsky and Donguzsky - 12 thousand military personnel, 470 armored combat vehicles, 90 tanks250 infantry fighting vehicles, 30 armored personnel carriers, about 220 artillery systems and multiple launch rocket systems. During the exercise, many of the latest weapons systems and military equipment were launched. Say, engineering troops used robotic systems. On the day when the leaders of the Armed Forces were present at the Donguzsky firing range, special mine clearance robots “Uran-6” from the 1st engineering and combat engineer brigade of central command performed passages in minefields. The personnel and equipment of the unit equipped with these complexes were transferred from Vladimir to Orenburg region by military transport aircraft aviation.

Solved the tasks of operational-tactical missile systems "Iskander-M". They fired their own regular missiles, the range of which does not exceed 500 km. However, in the reports, shown several times on the VGTRK channels, there was a message about the ability of Iskander to launch a cruise missile at a distance of up to 2 thousand km. This is quite remarkable for the state television company that broadcasted the report on the very day that the head of state oversaw the work of the operational tactical complexes. Recall that the Americans were very nervous and expressed their protests about the possible equipping of the Iskander with such missiles.

The crews of the Mi-8AMTSH Terminator helicopters of the Novosibirsk air defense military base of the Central Military District during the SKSHU have worked out interaction with the motorized rifle unit to block the area and destroy the illegal armed formations of the conditional enemy. At the stage of practical actions, the helicopter pilots launched the launch of unguided aircraft missiles and bombed the DOSAB-100 orientation and signal bombs. The targeting of "Terminators" to the targets was provided by airborne gunners with the help of domestic satellite navigation systems GLONASS.

Well, and it seems that the “terrorists” group, which did not have to be eliminated, carried out joint tasks of fighter and strategic aviation. At the command of “Air” from the airfield of Bolshoe Savino (TsVO), in less than five minutes, the link of MiG-31BM interceptor fighters was raised. Already in the air, the pilots received the coordinates of the long-range aircraft, and then the air targets approaching them. They accompanied the strategic bombers Tu-160 “White Swan” at a distance of just a few meters from them, and also worked to intercept air targets. 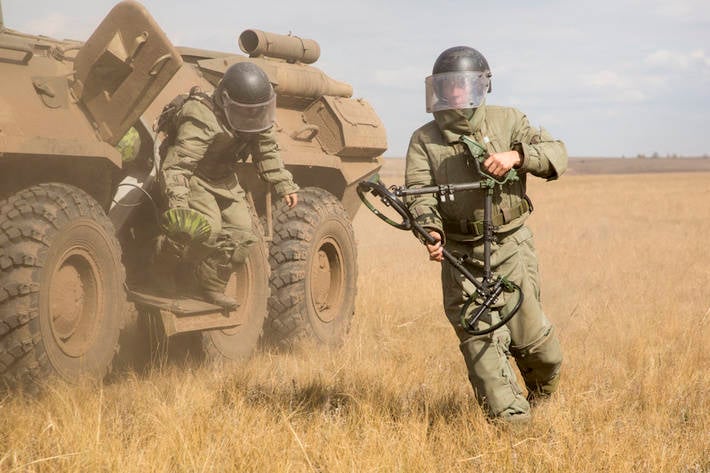 In the course of the exercise "Center-2015" the servicemen checked in practice the effect of the latest samples of special equipment. Photos from the official website of the Ministry of Defense of the Russian Federation

THE SECRETARY ORDER IS EXECUTED WITH EXPRESS RESPONSE

Vladimir Putin, after observing the actions of the troops, gave an assessment of the weapons and military equipment used in the maneuvers. “The exercises showed high tactical and technical characteristics of modern weapons systems and thus once again confirmed the significant potential of our defense enterprises,” said the Supreme Commander of the Armed Forces of the Russian Federation. However, at a meeting of the Military Industrial Commission (MIC) held after the attendance of the maneuvers, there were not so unambiguously positive assessments of the state of affairs in the defense industrial complex (MIC).

Acute problems in the Russian defense industry are associated not only with the economic crisis, but also with the systemic problems of the country's technical backwardness, the imperfection of the management and development of the military-industrial complex. Speaking at the meeting before the heads of the government and the defense industry enterprises, the head of state could not fail to note the positive trends in the development of the industry: “The tasks of the state defense order (GOZ) are generally fulfilled on time and in the right amount.” At the same time, the president said that "in mid-September, more than half of the troops, about 52% of the main types of weapons envisaged by the plans of this year, were already delivered to the troops." That is, for the remaining three and a half months, the remaining 48% of the main armament and military equipment (AME) must be supplied to the troops. There is a clear lag in the supply of weapons and military equipment from the plan for 2015 year.

Meanwhile, in May, at a meeting on the development of the defense industry, Vladimir Putin claimed that in the first four months of this year. “More than a third have already been delivered to the troops” of the planned weapons and military equipment (airplanes, helicopters and anti-aircraft missile systems). And on July 16, Deputy Defense Minister Yury Borisov reported to the head of state that "the implementation of the GOZ-2015 on the models defining the combat strength is 38%". Now GOZ-2015, as it turns out, is made a little more than half. It is easy to calculate that, compared with the beginning of the year, the rate of receipt of weapons and military equipment in troops decreased by at least 18 – 20%. Why?

The open materials of the meeting of the military industrial complex held on Saturday do not give an answer to this question. In the summer of 2015, Yuri Borisov explained the problems of non-compliance with GOZ-2015 by several reasons, some of which were objective. According to him, the problems are caused by the restriction of “the supply of imported components, raw materials and materials due to the introduction of sanctions, the cessation of production and the loss of a number of technologies”, as well as the “insufficient production capacities” currently available at defense companies and shipbuilding. It is unlikely for the two months that have passed since then, these problems have been resolved. The import substitution program (PI) is only valid for a year. And for the development and implementation of technologies and the construction of new production facilities, more time is needed. Alexander Navolotsky, Head of the Import Substitution Department of the United Shipbuilding Corporation (USC), believes that USC will complete the import substitution program only by 2018. Apparently, it is not by chance that Vladimir Putin on Saturday called the PI developed in the country a key one, “playing a decisive role in ensuring the technological and military security of Russia.”

“Now we are switching to replacing more and more complex component nodes,” the president noted. “We deliberately and, in general, coordinated, even went to a certain shift in the timing of delivery of modern weapons to the troops, bearing in mind that we need to go on our own production of these complex components and components.”

According to Yury Borisov, during the implementation of GOZ-2015, “there are cases of weak organization of the entire chain of cooperation by the lead executor, as well as irrational and inefficient distribution and expenditure of budget funds”. This problem last Saturday at the meeting of the MIC is also considered. According to its results, Deputy Prime Minister Dmitry Rogozin, it can be solved by the new Law “On State Defense Order”.

“There is an extremely strict system of control over the expenditure of these funds, while it is necessary to control the money, but it is also necessary to stimulate the development of defense enterprises,” said the Deputy Prime Minister, noting that in this connection the possibilities of budget crediting were considered. The Ministry of Finance spoke about this idea back in the 2014 year, when the crisis was just beginning and the government needed to amend the state armaments program (LG). If this question is again being discussed, the problem of financing the LG is still not resolved.

"Issues related to the possibility of using a budget loan to finance long-term defense programs will be formulated by the board of the military-industrial commission and submitted for signature to the president in the near future," Rogozin said.

Budget lending to defense industry enterprises is a market idea, which cannot be said about the initiative of the Federal Antimonopoly Service (FAS) on the possibility of using the reserve for the procurement of all the necessary army and the fleet “In advance at prices that are not galloping in the future due to financial conditions and market fluctuations.” The resources of the Russian reserve (metal, food, etc.) are created in case of use during the war. There is no war, but the president supported the FAS initiative.

This unconventional move does not fit into a market economy and resembles the times of the USSR. As well as the appointment of general designers who will monitor and allocate resources for the state defense basic research, “look at the applicability of these studies in the interests of defense and the creation of specific types of weapons and military equipment”. According to Rogozin, on Saturday, Vladimir Putin spoke with six new candidates for the positions of general designers. “The emphasis was placed on the creation of space systems of different directions, as well as on the further development of the GLONASS group,” said the Deputy Prime Minister.