Bandera IGILIZATION of Culture and History of Ukraine 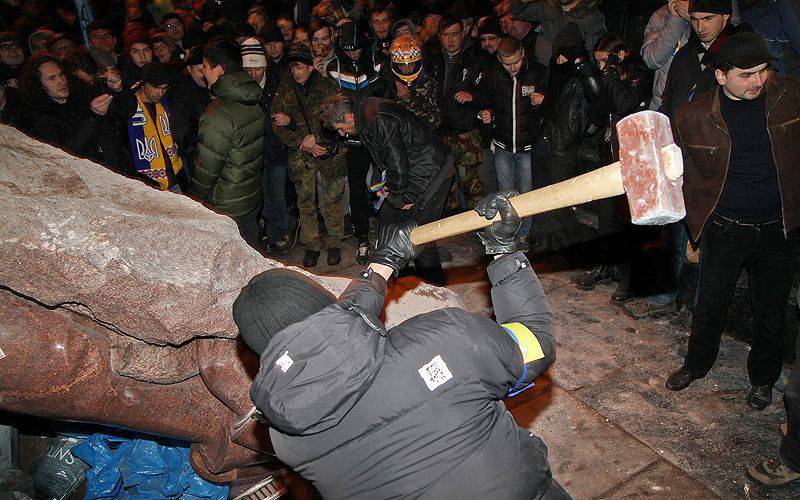 I think that centuries later, future cultural scientists and art historians of the current period stories Lands, now called Ukraine, will be studied under the name "postmaidan."

And it will be directly opposed to postmodern - as the darkest, gloomy, regressive period, rollback to the times of lack of culture and destruction.

The current authorities are furiously fighting against monuments of history, culture, architecture, against their history! It would be zeal-yes to the creation, but the Maidan initially led to the destruction and is not able to build something.

As ISIL militants in the Middle East, the current Ukrainian authorities can only destroy monuments, and not create them.

It would seem that everything that could have been destroyed had already been destroyed, streets and squares had already been renamed, but no, the newly-minted “Europeanized” vandals found new and new monuments “for demolition”, new and new reasons for their destructive activity. The Maidan fighters need to be used - this is what redirects the destructive energy of “monkeys with a grenade” from under the walls of the Verkhovna Rada to the monuments to historical figures.

Recently, the Ukrainian Institute of National Remembrance, headed by the convinced Bandera member Vyatrovich http: //www.memory.gov.ua/publication/perelik-pam-yatnikiv-i-pam-yatnikh -...). "Rel =" nofollow "target = "_ blank"> published a list of more than a hundred monuments and memorial signs that must be destroyed only in the city of Kiev.

Okay, we are accustomed to, that Bandera Maidan fighting with Lenin. It is even surprising that the Institute of Memory has discovered several more busts of Ilyich in the Ukrainian capital.

But it is significant that this list contains, first of all, the names of the figures of Ukrainian history, not Russian! Bozhenko, Zatonsky, Anischenko, Korotchenko — these are all native Ukrainians, that is, the ISIS Maidan has already begun to actively clean up the history of his own land, not disdaining the destruction of real cultural monuments, to which, no doubt, the sculpture of the Ukrainian figure Shchors belongs.

One can argue about the role of the Bolsheviks and the Communists in the history of the region. But if Maidan swore love to "European values ​​and traditions," would pay attention to these traditions!

In modern Germany, for example, the Communists are not very fond of either (this is putting it mildly), but in the center of Berlin no one is going to rename Rosa Luxemburg Strasse, Karl Liebknecht Strasse, Karl Marx Strasse. Why? Because, no matter how Germans treat these figures, they understand: they are an integral part of German history! For the same reason, no one touches the park and the monument to Ernst Telman.

The same originators of Ukraine are ready to forget the name of any Ukrainian who does not fit into modern tales about “Galician Jesus Christ”, “Ukrainian Baykopist Homer” and “ancient ukrah”. Moreover, in the “analytical material” cited, it is not only the abundance of monuments that the Memory Institute requires to erase from memory (why not call it the Memory Erasure Institute?).

The wording of the rationale for these barbaric actions is striking in this list. Some figures are “guilty” that they, they say, are not related to the history of Kiev. For example, the Bolshevik Babushkin, according to the department Vyatrovich, "has no relation to the history of Ukraine and Kiev in particular." So with a slight stroke of a pen, the Institute of unconsciousness withdrew from Ukraine ... Dnepropetrovsk. Since much of the revolutionary activities of Babushkin took place in Yekaterinoslav, where he published the newspaper Yuzhny Rabochy.

But to Kiev - yes, Grandma had no relationship. Like Bandera, and Shukhevych, and Ivan Franko, and, sorry, Darwin, whose name in spite of everything is one of the streets of the center of Kiev. Or on the line rename Kiev Honore de Balzac and Henri Barbus? Or excuse me, are they enrolled in the ranks of the "great Ukrainians"?

One of the rationales for renaming Bauman Street is the fact that he is a native of ... Tatarstan! Yes, yes, it is Tatarstan! Why then do not write that Ivan Mazepa was born in the Ukrainian SSR?

A number of leaders (including Shchors) are accused of saying that they fought against the "UNR armies". Similarly, the notorious Galician Sich Riflemen fought the lion’s share of their activities in those parts against the UPR - first in the ranks of Denikin’s army, and then generally on the side of those Bolsheviks with whom Vyatrovich fought so fiercely. So why is now Kiev street, named after the Bolshevik Artem, named after the Bolshevik Sich Riflemen?

Many Soviet leaders, whose monuments are to be destroyed, in support of this destructive step included the fact that they were repressed under Stalin. That is, it should be understood correctly, since they were shot by order of Stalin, now they need to destroy commemorative signs - Stalin could not be mistaken, according to Vyatrovich, right?

Do you know what the Polish and Soviet writer Wanda Vasilevskaya did? It turns out that she wrote denunciations of Yevgeny Bereznyak, who served as the prototype of the Soviet intelligence officer Major Vortex. Yes, yes, so in the justification of the Institute and said.

That's just the quandary turns out! Vasilevskaya was not reported to Stalin by the Major Vortex, but by Yevgeny Bereznyak, a propagandist of the Lviv regional party committee, who was in charge of the local education department, that is, directly related to the Sovietization of Galicia, up to 1941! It was he who later became the scout and savior of Krakow. So in the end, Vasilevskaya, who courageously fought against Communist Bereznyak, acted in the spirit of the current fighter for the decommunization of Vyatrovich, didn't she? Why is Vyatrovich her a memorial sign requires to destroy?

And Alexander Lyashko was generally accused of the fact that he headed the commission to eliminate the consequences of the accident at the Chernobyl nuclear power plant! Well, as I understand it, the former head of the Council of Ministers of the Ukrainian SSR suffered solely for his last name. Only the leader of the modern radicals Lyashko went into the opposition — that was when that Lyashko began to pose a threat to the “Ukrainian national memory”, and the memorial plaque in his honor was ordered to be eliminated.

And quite a funny wording is contained in the justification for the need to rename the streets named after Luxembourg, Liebknecht and Telman mentioned above. They are guilty of the fact that (think about it!) They were “actively used by Soviet propaganda in the process of establishing Soviet power in Ukraine”! Used in propaganda!

So forgive me, Taras Shevchenko was actively used in the propaganda of the Soviet government. The first monument to him in Kiev was erected just by the Bolsheviks, and not by Petliura or Skoropadsky. And it was destroyed by Denikin. So why aren't numerous streets and monuments of Shevchenko in Kiev renamed?

And Bogdan Khmelnitsky was used by the Bolsheviks in propaganda - a whole order in his honor was established. So, everything, a monument to Khmelnitsky demolished? Or will it be the next stage of the activity of Ukrainian IGLIzators? And they, it seems, are not going to stop until the last monument is demolished in Kiev, no matter to whom, and in honor of what it is installed. Or until they are stopped by force, just as ISIS activities in Syria are now being stopped!