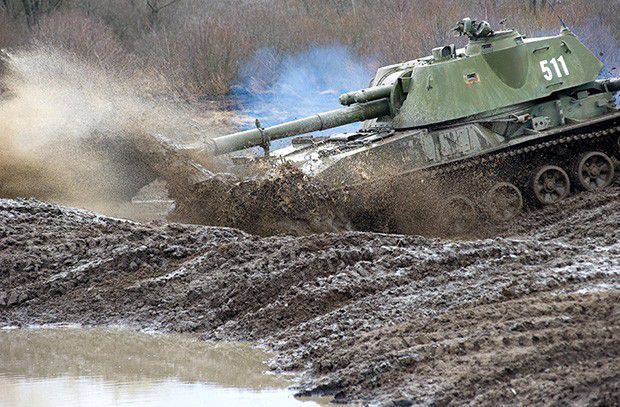 The legendary Soviet self-propelled divisional howitzer was born almost a miracle, and now in no hurry to resign
In 1981, the US Department of Defense issued a poster on which were presented seven types of weapons of the Ground Forces of the Soviet Army, which presents the greatest danger in the event of a direct armed clash. Five of the seven “Soviet threats” are tracked combat vehicles, among which the legendary models were naturally: the T-72 tank, the BMP-2 tank, the Shilka self-propelled anti-aircraft gun and the two “flower” self-propelled guns - “Carnation” (122 mm) and "Acacia" (152 mm). 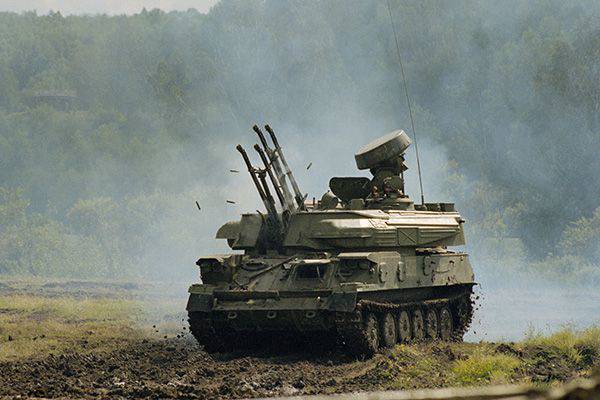 Anti-aircraft self-propelled unit "Shilka" during exercises. Photo: Anatoly Kuzyarin / TASS
Such recognition by a potential adversary is worth a lot. By that time, the United States had a similar 109 mm caliber M1X155 self-propelled howitzer, but it was inferior to the Soviet self-propelled gun in many respects. In addition, our gunners, in contrast to their American colleagues, had already managed to test the howitzer in battle: it was the main means of artillery support for the motorized riflemen of the 40 Army, which fought in Afghanistan. But after all история "Acacia" was formed in such a way that this legendary machine could not even be born ...

Return from missiles to guns

There was no serious self-propelled artillery that could be used for classical firing from closed positions and counter-battery fighting in the post-war Soviet army. Self-propelled guns of the Su-100, ISU-122, and ISU-152 type remaining from the war were either assault or anti-tank and, in theory, should have been used in battle formations along with tanks. Meanwhile, the troops of the North Atlantic Alliance, and primarily the United States, were actively moving from towed artillery to self-propelled.

Timid movements in this direction were undertaken in the USSR, but they very soon put up a cross. The fault was the reckless fascination of the Soviet leadership with rocket technology and the boundless faith in its omnipotence. When it became clear that the missiles could not replace the entire range of heavy field weapons, and the global nuclear war was clearly postponed, replaced by a series of local conflicts, they returned to the idea of ​​self-propelled field artillery. The supporters of Nikita Khrushchev, who did not want to see any other army, also played into the hands of her supporters. weaponsexcept rocket.

4 July 1967 was a joint resolution of the Central Committee of the CPSU and the Council of Ministers of the USSR to eliminate the backlog of Soviet self-propelled artillery from the artillery of the NATO countries. That it was the starting point in the history of the 152-millimeter self-propelled howitzer 2C3 "Acacia". The design of the Ural Transport Engineering Plant took up designing the novelties.

The work was carried out not from scratch. A few years before, the specialists of the All-Union Research Institute of Transport Engineering (aka VNII-100 - the main research institute dealing with tracked combat vehicles) conducted a large study on the subject of “Acacia”. It turned out that the new self-propelled gun should not be built according to the usual pattern, when the conning tower is located in front, and the engine-transmission compartment is at the back, but vice versa. It was also obvious that the diesel engine at that time was not able to meet all the needs of the self-propelled gun and needed a new one. The easiest was with a gun: all that was needed was to redo the well-proven towed 152-mm howitzer D-20 under tower installation. Its creators from Sverdlovsk OKB-9, whose trunks stood on the legendary predecessors of the future Acacia, took up this task.

The military also had their wishes: they needed a fairly light and mobile self-propelled howitzer of the divisional level, which could be deployed not only under its own power, but also on airplanes and landing ships. In addition, the gunners demanded that the designers abandoned the fixed felling, as on the self-propelled guns of the military period, and equipped the novelty with a mobile tower, which provided circular fire and a large elevation angle of the barrel. To achieve the fulfillment of all these requirements and without over-burdening the new SPG, it was possible in only one way: to abandon counter-armor and dispense with anti-bullet. What was done. However, at that time only main battle tanks were equipped with counter-armor, and the rest of the combat tracked vehicles did not, believing that even the thickest armor would not save the anti-tank missiles of the new generation. Yes, and go on the same battlefield with tanks, new cars are also not going, which means that the armor could save a lot of weight.

The first two prototypes of the new self-propelled howitzers were ready by the end of 1968, and went to the test. Soon, they were joined by four more samples, but all six were mercilessly criticized by the military for the excessive gas content of the fighting compartment. But the chassis of the new self-propelled gun, the basis for which was the chassis of the Krug air defense system, turned out to be above all praise. Which is not surprising, because by that time it had been running around at various ranges for five years and had got rid of most of the “childhood diseases”.

They tried to solve the problem of gas contamination by changing the howitzers loading scheme and finalizing the bolt, but in the end they decided not to over-complicate and managed to refine the ventilation system, install a more powerful ejector on the barrel and use new sleeves. A year later, in 1970, the refined samples of the new self-propelled howitzer entered state tests, earning the highest marks. As a result, in 1971, the self-propelled divisional howitzer of 152 caliber mm 2C3 “Acacia” was adopted by the Soviet army. In accordance with the concept of tactical nuclear strikes that prevailed in those years (and, to be sure, keep up with the United States, which endowed its own vehicle, the M109 self-propelled howitzer), tactical nuclear projectiles were also introduced into the Acacia ammunition nomenclature. But to shoot them in practice, ACS 2C3, fortunately, was not possible.

But the usual ammunition, among which were the classic high-explosive fragmentation, and cluster, and active-reactive, and armor-piercing, and lighting, "Acacia" over the next forty-odd years, they shot down into their heads. The first combat use of the new howitzers was in Afghanistan, where the 40 Army had at least three self-propelled divisions with self-propelled guns in the 50. “Acacias” were used both to support motorized riflemen who participated in assault operations, and even to support road convoys going through the Salang Pass. Then it became clear that the anti-bullet armor to protect the crews of SAU from the fire of large-caliber machine guns such as DShK or KPVT is not enough. But they did not redo the car, and the gunners came out of the situation, covering the self-propelled guns with used trucks and boxes filled with sand from under the ammunition.

At the same time, Soviet self-propelled howitzers received a baptism of combat even further south - on the fronts of the Iran-Iraq war. The Iraqi forces, armed with Soviet weapons, were using the modernized 2C3, which were put into service in 1975, with might and main. New "Acacia" along with 122-millimeter regimental self-propelled howitzers 2C1 "Gvozdika" formed the basis of Iraqi artillery groups. In the Iraqi army, they were used up to Operation Desert Storm, but significantly less efficiently than in the Soviet one: the difference in crew training and command and control skills affected. 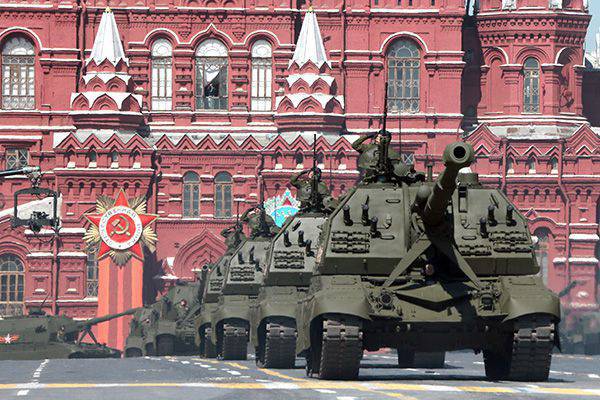 Column of self-propelled artillery mounts (ACS) "Msta-S" during the final rehearsal of the Victory Parade on Red Square. Photo: Alexey Dityakin / TASS
Acacia was noted in all conflicts in the post-Soviet space, starting from Transnistria and Abkhazia, including both anti-terrorist campaigns in Chechnya and the operation to force Georgia to peace and ending with the armed conflict between Ukraine and Novorossia. And the Ukrainian military used the least effective self-propelled howitzers - apparently, due to the lack of combat experience and the desire to fight. Nevertheless, it was the self-propelled howitzers 2C3 that were in service with the Armed Forces of Ukraine that were used to bombard the residential quarters of Donetsk and Lugansk.

For more than forty years of history "Acacia" this self-propelled three times modernized. For the first time - in the 1975 year, when the 2C3M modification appeared with a new mechanized stacking of drum-type ammunition, which made it possible to increase the ammunition to 46 shots, and an improved fighting compartment. The next modification, 2C3М1, appeared in 1987 year and was distinguished by a new radio station and gunner's sight, as well as equipment for receiving command information from the machine of a senior battery officer. In addition, this modification was able to fire guided missiles "Krasnopol", which make it possible to hit targets at speeds up to 35 km / h.

The third modification, which received the index 2C3М2, appeared after the collapse of the Soviet Union. The command of the Russian army was not going to abandon the so well-proven self-propelled howitzer, but it did not make sense to use the previous modifications: they were getting old too quickly. As a result, in the Russian version of 2006, an automated guidance and fire control system “Mekhanizator-M”, smoke protection systems and improved habitability of the combat compartment appeared.

But on the whole, the layout and construction of Acacia turned out to be so successful that in all four decades they did not require major alterations. On all modifications - 4000 units were released during this time - a place in front to the left is given under the control department, where the driver is located, and to the right of it is a B-59 diesel engine with 520 horsepower. (which, with the weight of the ACS in 27,5 tons, gives the power density in 19 "horses" per ton). Such load-bearing capacity allows Acacia to move along the highway at a speed of 60 km / h, and over rough terrain - 25 – 30 km / h, to overcome gradients up to 30 degrees and three-meter ditches, as well as fords up to a meter deep.

The rest of the self-propelled gun - the central and aft compartments, as well as the tower - is occupied by the fighting compartment, which houses the D-22 howitzer and three crew members: gunner, loader and commander. The three of them, using a semi-automatic vertical wedge gate and drum piling, provide a firing rate of up to 3,5 shot per minute. However, such a fire will not be possible for a long time due to thermal limitations: without a break, the 2 – 3 ACS can launch 30 shells in 10 minutes, or make 75 shots in an hour, after which the barrel needs to cool. Since “Acacia” can fire at direct fire (at a distance of up to 4 km) and from closed positions (up to 24 km when firing an active projectile), the self-propelled gun is equipped with a self-digging system that allows it to prepare an artillery trench in 20 – 30 minutes .

Today, the 40-year-old Akaciy service is gradually coming to an end. At the beginning of the 1990-s of the Ministry of Defense began their gradual replacement with more modern self-propelled guns 2C19 "Msta-S", and now it’s about equipping self-propelled artillery with the newest type of self-propelled howitzers - Coalition-SV. For the first time they were shown to the public at the Victory Parade this year.