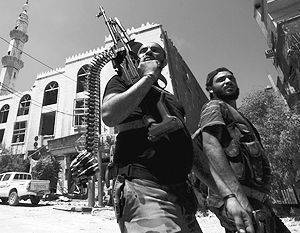 Su-30 fighters, Su-24 front-line bombers, Su-25 attack aircraft, Tanks T-72 and T-90 - all this range of weapons, according to a number of sources, is now actively coming from Russia to Syria. How exactly should the Syrian government army use this formidable force to turn the tide of battle and throw ISIS into the desert?


The choice of weapons that can be used in the framework of the new stage of the coalition operation against ISIS is primarily determined by the setting of tasks. Statements about mass deliveries of such weapons from Russia are received almost daily. Moreover, the first reports of the successful use of the new Russian weapons in Syria.

How exactly should Syria use Russian weapons with the greatest efficiency? It largely depends on the targets chosen on the territory of ISIS, both tactical and strategic.

The choice of strategic objectives is based on an analysis of the structure of ISIS, primarily its logistical system, supplies and tactics. ISIS has proven to be extremely vulnerable in the field of supply, despite the considerable financial potential created mainly by oil smuggling. In addition, the rapid advance to the north and north-west of ISIS greatly stretched communications.

This is especially important because in recent months the ISIS military organization has begun to acquire the features of a regular army. She had rear bases, warehouses, fuel stations. For the Salafists, this is a necessary measure, and they are not ready psychologically, or organizationally, or in command, to move to a “regular” war — with front and rear. During the two years of the war, ISIS physically lost practically all the military professionals who created its military structure. These were mainly former Iraqi generals and colonels, Ba'athists who chose ISIL as an effective form of US revenge and a tool for creeping the restoration of Iraq “as under Saddam”, but without Saddam. Now, however, only fanatics accustomed to terrorism and guerrilla, and not to the organization of a regular front, remained in the command of ISIS.

In addition, ISIS gradually began to lose attractiveness for the “20 tribes union” of central and northern Iraq, which was a mobilization reserve for ISIL. People became commonplace miss. Practically on the entire front line in Syria, ISIS was forced to go on the defensive, however, quite successful. The offensive actions fit perfectly into this scheme, since they are very pinpoint in nature and consist in attempts to seize the large bases of the Syrian government forces. 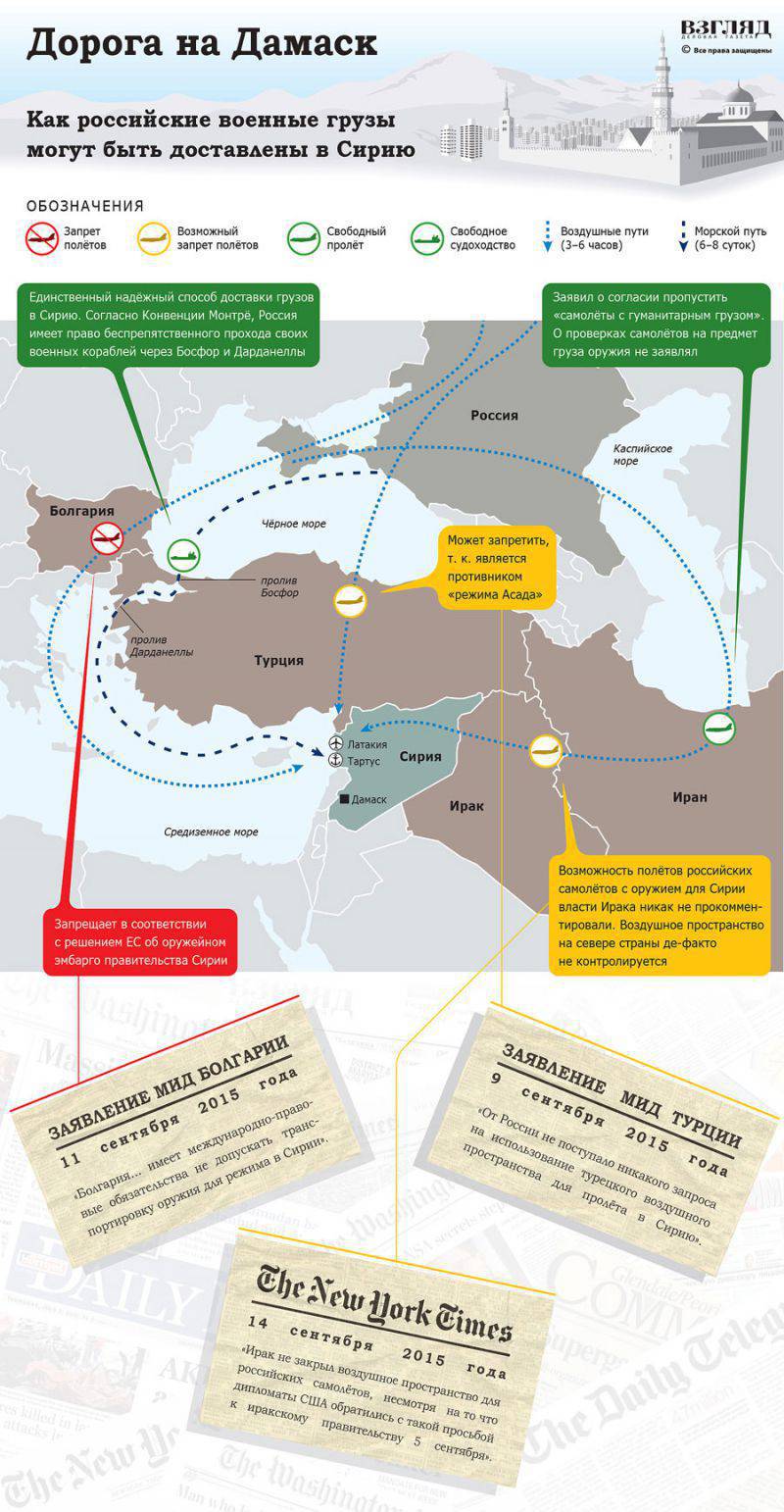 How Russia delivers military goods to Syria
Thus, the most profitable and important strategic goals for a potential operation against ISIS can be its rear bases, especially large fuel stocks, front-line repair bases, as well as columns delivering fuels and lubricants to the fronts.

Attacks on such targets are not as difficult as they seem at first glance, although they are associated with purely technical difficulties. Already, the government forces have enough Air Force instruments at their disposal to begin successfully carrying out such assault operations. Squadrons (12 units) of Su-24 front-line bombers and the same number of Su-25 attack aircraft are quite enough - namely, that number, according to some reports, was recently transferred to Syria from Russia.

ISIS supply routes through the desert can be easily established. There is still relatively recent experience in dealing with such convoys in Afghanistan, where both helicopters were actively used (the Syrian air force has seven Mi-24 and an unspecified number of Mi-4), and ambushes by special forces and airborne troops.

The weak side of this tactic may be the insufficient provision of the Syrian government forces with modern communication systems and radars. Already, there has been an increase in the activity of communication systems, some of which were not at all in the past month. True, they are located outside the “zone of responsibility” of ISIS and control the space held by the “ordinary” opposition.

In addition, it is imperative to link all such operations (both airborne and landing) to real-time satellite navigation. Previous attempts by the United States and other coalition countries in a similar way to stop the advancement of ISIS in Iraq did not produce a result: ISIL advanced very quickly and practically did not need logistical support, since Iraqi warehouses fell into their hands intact. And the tactics of small groups allowed igilovtsam to disperse when approaching the American bombers, as a result of which they bombed the previously planned, but already empty space.

An additional role was played by the “informal intelligence” of ISIS: US planes took off from airfields in the Gulf countries. And there, in the old manner, one could just sit in a coffee shop opposite the base and record every plane taking off. At the base in Latakia, you will not do that. Although she still has a weak spot: in theory, you can get to her from modern RZSO, which, thank God, ISIS does not possess.

According to data not officially confirmed, the Russian aviation and equipment can be located not only at the base in Latakia, but also at Batra airfield (south of Latakia along the seashore, not far from the city and port of Jeble), as well as two auxiliary naval bases in the vicinity of Tartus.

A few weeks of this kind of operations, and the supply of advanced parts of ISIL in the province of Idlib, around Aleppo, in the suburbs of Damascus and at Dair al-Zor will be disrupted. But all this time, as now, heavy ground battles will continue at several critical points. And one can successfully carry the ISIL’s logistic warehouses and chase caravans in the desert, but an almost bloodless Syrian government army must somehow hold important objects and locations.

In five years of war, government forces lost more than half of their armored vehicles, and the rest have a critical shortage of spare parts. But already in the battles in the suburb of Damascus Eastern Guta, the T-72AB tanks with a new dynamic defense were seen - more than modern weapons for Syria. But this is clearly not enough, and we can still talk about T-90, since only they are able to withstand the anti-tank systems that ISIS has.

Modern tanks are not a luxury, but a direct necessity. Government forces now face at least three immediate tasks. First: to drop the forces of ISIL and its allies from the eastern suburbs of Damascus. The second is to unlock the military base of Kuwaireis in the Aleppo area. Third: restore full control over the highway Damascus - Homs. There is a fourth, seemingly not directly related to the ISIS operation, but also extremely important for the overall course of military operations: to stop the offensive of the opposition forces on the government enclaves of al-Foy and Kafrai not far from the provincial capital Idlib.

What are the creators of the "Islamic State"
The air base of Kuwaireis has been blocked for almost three years, but until recently its garrison could somehow receive supplies. From the front line in the Aleppo area to the base, approximately 60 kilometers, but all attempts to break through the ISIL at Lake Jabbul failed precisely because of the lack of a sufficient number of modern armored vehicles.

The defense of Kuveiris has recently shown all the advantages of the equipment available to government forces, primarily Russian-made aircraft. It was with the help of aviation that the attempts to storm it with a few ISIS artillery were stopped time after time. There is reason to believe that strengthening the air component, along with the transfer of more modern armored vehicles for Aleppo, will finally enable unblocking the base, which, in turn, will mean the beginning of extrusion of ISIL on this front area into the desert.

The strategic route Damascus - Homs is currently cut in two places. But if the first problem area (about three kilometers) can still be bypassed, then in another area ISIS has seized several dominant heights. Knock them out without the use of artillery and helicopters is very difficult and fraught with heavy losses. The current number of Mi-24 is enough to conduct simultaneously only one operation. It’s not a fact that government troops have a sufficient number of trained pilots, but this is not a problem that cannot be solved precisely within the framework of an agreed coalition operation against ISIL.

The fighting in the densely populated eastern suburbs of Damascus took on the nature of a war of annihilation about a month ago, when government forces launched an unsuccessful attempt at a counter-offensive. Most likely, this attack was more political than planned from a military point of view. As a result, the government army withdrew from Eastern Guta and the Duma with heavy losses. Meanwhile, it is precisely this region that can be considered the basis for organizing a general counterattack on the Palmyra region, which could, in principle, turn the tide of military operations against ISIL in Syria. Now ISIS has pulled its most combat-ready forces into these quarters, so that the offensive of government forces is possible only with a considerable advantage. Presumably, it is in this region that modern types of Russian weapons can arrive, the same T-90.

But such an advantage will not be enough to attack Palmyra in an organized and quick manner. Between the suburbs of Damascus and Palmyra - a bare desert with several roads and strategic intersections. Probably the only stronghold here is the oasis of Al-Cartiayn. These are almost ideal conditions for the landing of troops with the aim of cutting off large ISIS forces gathered in the suburbs of Damascus. Such an operation is possible again in the presence of amphibious vehicles, including transport aircraft, helicopters, and special armored vehicles. When conducting such or similar operations, there is simply no alternative to the Russian military equipment.

The situation around the suburbs of Damascus with the prospect of Palmyra is the key to all possible operations against ISIS. The main burden is borne and will be borne by the Syrian government troops, but they must be sufficiently prepared for the use of modern technology and the use of previously unfamiliar tactics, in particular the landing of air assault forces and the use of helicopters for assault operations. And if Syrian troops have long been accustomed to street fighting and holding the front, such operations will require additional training and equipment.

But still, the main thing for determining the size of Russian military supplies to Syria and, most importantly, its quality and nomenclature should be the development of a holistic plan for a coalition operation against ISIS. There is a high probability of a planning error at the stage of obtaining intelligence data, or, even worse, an excessive enthusiasm for top tactical tasks under pressure from purely political factors. Now there is still a chance not to give ISIS, while it is in a strategically vulnerable position, to regroup and again change tactics. And this, as experience has shown, is fast.