29 September 2015
1
Shortly after the outbreak of the First World War, active work began on the creation of new armored cars in Russia. One of the main founders of the promising technology was the specialists of the Officers' Infantry School in the city of Oranienbaum. Thus, in the first half of the 1915, new armored cars of the design of the head of the school, Major General N.M. Filatov, received the name "Three-wheels". In the future, officers of the Officer Rifle School presented several new armored vehicles, some of which were built in series and used by the troops.


After the completion of the work on the “Three Wheels”, a group of specialists led by General Filatov set about creating a new armored car project with a less daring and non-standard look. However, this work did not last long. Shortly after they began, it turned out that one of the school’s staff, Ensign Ulyatovsky, had already developed an interesting and promising machine-gun armored vehicle project. It was decided to abandon the creation of a new car and focus on the Ulyatovsky project.

In his project, the ensign offered an unusual but curious way of building an armored car. According to Ulyatovsky, the base for the car was to be a chassis assembled from parts of damaged cars. Thus, it became possible to use not only serviceable, but also non-recoverable equipment. A sufficiently large number of damaged and decommissioned cars, which could not be repaired, had already accumulated in the army and in the rear. At the same time it was possible to use this technique as a source of spare parts. Ulyatovsky proposed to use such "resources" in the construction of new machines. 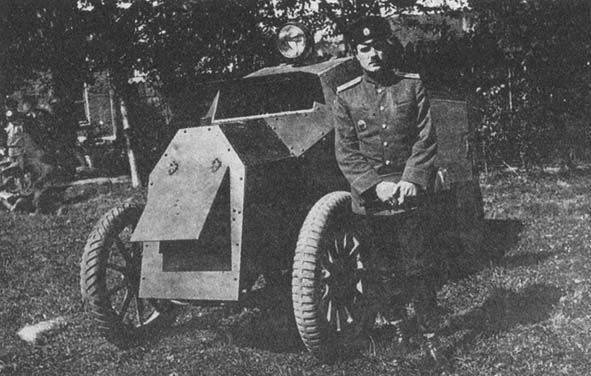 Ensign Ulyatovsky and his armored car. Photo of Wikimedia Commons

On the chassis assembled from the available spare parts, it was necessary to install the armored hull of the original design. The author of the project tried to reduce the size and weight of the combat vehicle, thereby ensuring acceptable mobility on highways and off-road. All this affected the appearance and layout of the machine. It is noteworthy that the desire to reduce the size of the armored car affected even the location of crew jobs.

Of the existing non-repairable cars assembled four-wheel chassis with the formula 4х2. Accurate information about the "sources" of certain spare parts are missing. Probably, Ulyatovsky and his colleagues built the chassis from the aggregates of machines of various models. Thus, we can assume that the promising armored car was built on the basis of a non-standard original chassis. It should be remembered that the armored cars of that time were often named after the manufacturer of the base chassis. In view of the absence of this, a new project was called by the name of the designer.

From the available materials, it follows that the chassis of the Ulyatovsky armored car had a standard design for a similar technique of those years. A gasoline engine and a number of auxiliary equipment were located on a rectangular chassis. The chassis was composed of two axles with front steering and rear drive wheels. Dependent suspension used leaf springs. On the bridges fastened single-spoke wheels.

The armored car of the new model had to be equipped with the hull of the original design. It was proposed to collect from the armor plates on the frame of metal profiles. Booking sheets with a thickness of up to 5-6 mm should be fixed to the frame with bolts and rivets. From a technological point of view, the armored hull of the Ulyatovsky design did not differ much from similar units of other equipment. The main difference from other armored cars was in the dimensions of the hull. In order to facilitate the car body had the smallest possible dimensions. The surviving photos show that the armored car is much lower than the officers standing next to it. Thus, the overall height of the combat vehicle did not exceed 1,7-1,8 m, which was unusual for armored vehicles from the First World War.

The engine and gearbox of the base chassis were protected by an armored hood assembled from several armor plates. Frontal sheet was installed with a slight slope back and had a large window for ventilation of the engine compartment. A movable cover was fixed on the window, which should have been lowered before entering the battlefield. The sides of the engine compartment were arranged vertically. They provided hatches for engine maintenance. From above, the power plant was protected by a roof of three relatively narrow sheets: one placed horizontally, two - with a slope.

The back of the sides of the engine compartment was associated with diverging sides of the habitable compartment. At the same time, the upper sloped sheets of the hood “went over” to the triangular cheekbones of the hull. Above the roof of the hood and triangular panels was a large viewing hatch to observe the road. Ensign Ulyatovsky decided to abandon the "classic" frontal sheet, leaving instead a large window. To safely participate in the battle, the hatch had to be closed with a lowered lid with slits.

The habitable part of the armored hull had an original shape formed by a large number of even sheets. Directly behind the bonnet and the front wheels, the body was expanded with zygomatic sheets at an angle to the machine axis. Further vertical sides were located, and in front of the rear wheels were provided two more sheets, located at an angle. The roof of this part of the body consisted of four sheets of different sizes and shapes. It consisted of two inclined central panels and four side sheets, installed with a slope inward. 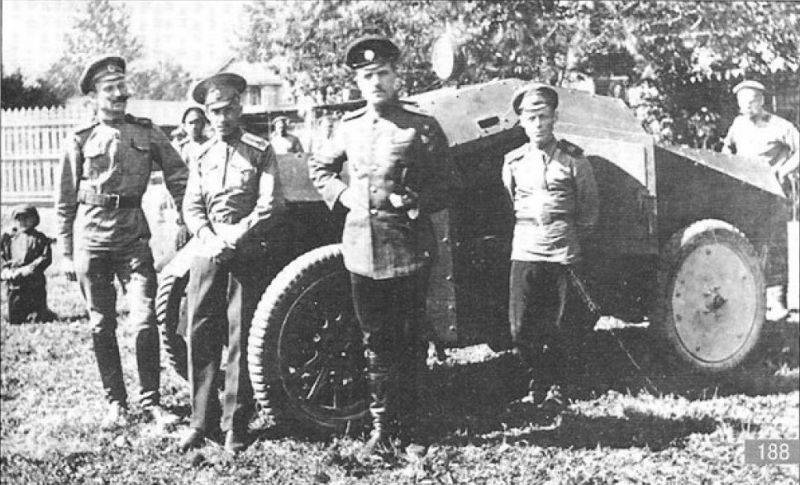 The aft part of the habitable compartment was made in the form of a metal casing located between the rear wheels. On the sides of the roof of this unit were inclined triangular panels.

To access the inside of the car were provided several hatches. The main one was located in the left side, in the rear part of the central wide body assembly. In addition, the rear large sheet of the roof was hinged and could also be used as a hatch.

It was proposed to observe the situation through a large frontal hatch, small inspection hatches with flaps in the front inclined roof sheets, and also with the aid of an embrasure in the rear hull sheet.

The crew of the armored car Ulyatovsky was to consist of three people. In front of the habitable compartment was the driver's seat with controls. Behind him was the commander. The workplace arrow occupied almost the entire free part of the combat compartment. The author of the project decided to use a non-standard location of the machine-gunner, which made it possible to reduce the size of the body. The shooter should have been lying down, while his head was in the aft "box" of the hull. Despite some inconvenience, it allowed to significantly reduce the overall height of the machine.

Initially, the armament of a promising armored car consisted of one Maxim machine gun. it weapon should be installed in the embrasure of the stern sheet, which allowed shelling targets in the rear hemisphere. Like many other armored cars of that time, the combat vehicle of the Ulyatovsky design was to be reversed on the battlefield. Thus, the location of the machine gun is fully consistent with the features of the planned operation of the machine.

The new armored car turned out to be quite compact and light. Exact dimensions and weight are unknown, but it can be assumed that the overall height of the vehicle did not exceed 1,7-1,8 m, the maximum body width was within 1,5-1,6 m, and the length was approximately equal to 3,5 m. The combat weight of the armored car can be estimated at 1,5-2 t.

Unfortunately, there is no information about the tests and characteristics of the Ulyatovsky armored vehicle. You can only try to estimate the parameters of this armored vehicle, using the available fragmentary data. Nevertheless, it is known that the existing machine-gun armament did not suit the leadership of the Officer Rifle School and, probably, the potential customer represented by the military department. 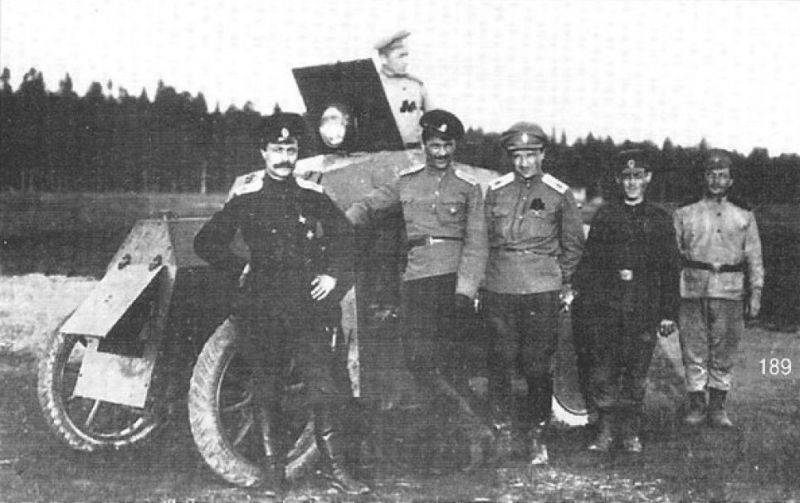 According to the test results, it was decided to change the composition of the armament of the machine. Instead of a single machine gun, which did not provide the required firepower, it was proposed to equip an armored car with artillery. As a new weapon should use 76-mm anti-storm gun mod. 1910 of the year. Some sources mention the installation of other tools, but this information does not seem to correspond to reality.

Due to the use of new weapons had to make some improvements in the design. Thus, the aft of the hull has changed, first of all a sheet with an embrasure. In addition, there were mechanisms for mounting the gun. Finally, under the bottom of the hull it was proposed to install a lowered coulter, with which the recoil of a relatively powerful weapon should be transferred to the ground. The opener borrowed from the gun version of the "Three-wheels" Filatov. As a result of all these improvements, the combat mass of the armored car increased markedly and amounted to 3 t.

When, how and with what results the gun version of the Ulyatovsky armored car passed the tests is unknown. Moreover, the last mention of this machine is connected with the installation of new weapons. Information about the future of this armored car is not available. Perhaps the cannon fighting machine successfully passed the tests and was recommended for dispatch to the troops. In addition, we can not exclude that she did not cope with the tests, because of which she was refused.

Information about the armored car Ensign Ulyatovsky after installing the gun is not available. It is also not known whether this car participated in the battles and with what results. In question and the end of the service of this armored car. Apparently, at some point the car lost its reservation and weapons, but even the approximate dates of this could not be established.

In parallel with the armored car of the Ulyatovsky specialists of the Officer rifle school developed and built military equipment of some other types. Some of these cars reached the front and managed to take part in battles with certain results. In addition, other vehicles, such as the “Three-wheels” Filatov, managed to stay in stories domestic armored vehicles. The project of Ensign Ulyatovsky was much less fortunate. Most of the information about him is not preserved history.