28 September 2015
13
In 2015, the Ural Automobile Plant presented two new trucks based on a single chassis, featuring some design features. At the “Army-2015” and Russia Arms Expo 2015 exhibitions, prototypes of the Tornado-U Ural-63704-0010 family were shown. At first, the specialists and the public were shown a “regular” high-capacity car designed for the armed forces, and then a similar vehicle with a new cabin capable of protecting the crew from various threats became an exhibit.


Both trucks with different cabins are built on the basis of a single chassis Ural-63704-0010, which affects their characteristics and purpose. Both cars are designed for the carriage of goods and personnel, as well as for towing transport or special trailers. Due to the wheel formula 6х6 it is proposed to ensure the highest possible maneuverability in various conditions, and other design features lead to an increase in carrying capacity. In addition, two new Tornado-U machines differ only in the cab design. Maximum unification should facilitate the production and operation of such equipment. 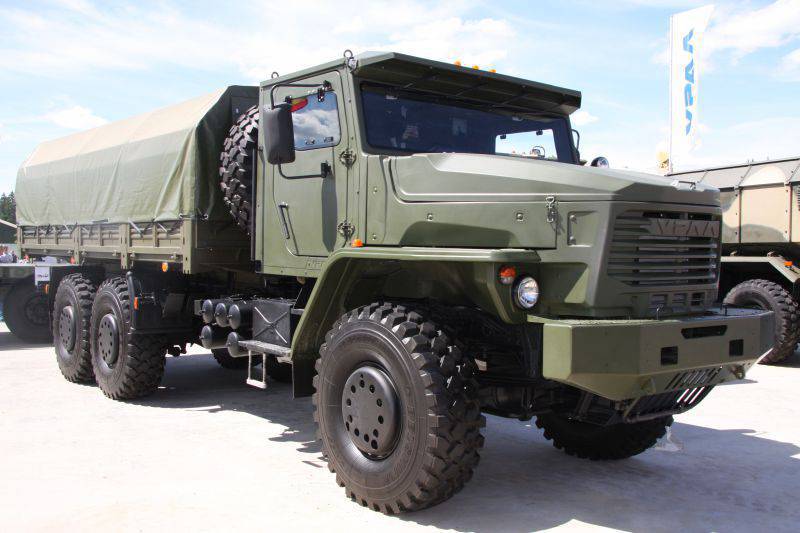 In June, as part of the Army-2015 forum, the Ural-63704-0010 truck was demonstrated in an unprotected version. At the same time, the main characteristics of this car and the base chassis, later used in the construction of a protected truck, were announced.

The Ural-63704-0010 three-axle all-wheel drive chassis allows you to transport loads weighing up to 16 tons. The total weight of the vehicle can reach 30 tons. If necessary, the truck can tow a trailer with a total weight up to 12 tons. : on the front axle there are 7,5 tons, on the rear trolley - 22,5 tons.

The Tornado-U trucks have a hood layout typical of the Ural vehicles. In front of the frame, an engine is installed, behind which the crew cabin is located. Behind the cabin provides space for installation of bodies or vans of various types. So, at exhibitions of this year the sample of the truck with an onboard body and an awning was shown. At the request of the customer, the Ural-63704-0010 chassis can also receive other equipment for cargo transportation.

It is proposed to equip the base chassis of two new trucks with an in-line six-cylinder diesel engine with an output of 440 hp. A mechanical gearbox is connected to the engine, after which the torque enters a two-stage transfer case with a locking center differential. All bridges are equipped with central and wheel gearboxes. In addition, the middle axle has an inter-wheel differential lock and axle lock. The design of the rear axle provides only lock the cross-axle differential. 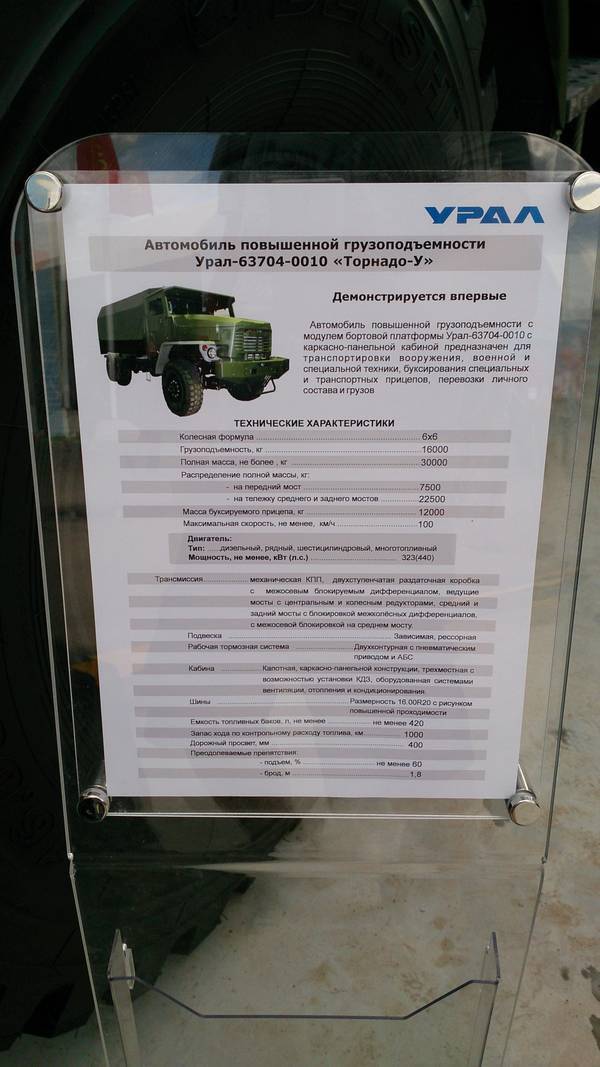 The plate with the characteristics of the truck. Photo Seiran / Otvaga2004.mybb.ru

Chassis new chassis has a dependent suspension on leaf springs. Used wheels with tires size 16.00R20, adapted for off-road use. There is a dual-circuit air brake system with ABS function.

Thanks to its relatively powerful engine, the Tornado-U truck can reach speeds of up to 100 km / h. Fuel tanks with a capacity of at least 420 l provide a power reserve at 1000 km. It also provides a rise on the slope 60% and overcoming the ford to a depth of 1,8 m.

The unprotected version of the truck Ural-63704-0010 is equipped with a frame-panel cab and a hood of a similar design. The casing of the engine of this machine is made of several metal and plastic panels mounted on the frame. In the cabin there are three seats for the driver and accompanying. A good view from the cockpit is provided by a large windshield without covers and side windows in the doors. Additional convenience of the crew is provided by footboards under the doors and the original location of the door opening levers. Due to the high position of the cabin, the levers are located at the bottom of the doors.

In Nizhny Tagil for the first time showed a sample of an army truck based on the Ural-63704-0010 chassis, equipped with a protected cabin. This car is proposed to be built on the basis of the existing chassis, but using the new cabin module designed to protect the crew from firing from small weapons or explosive devices. 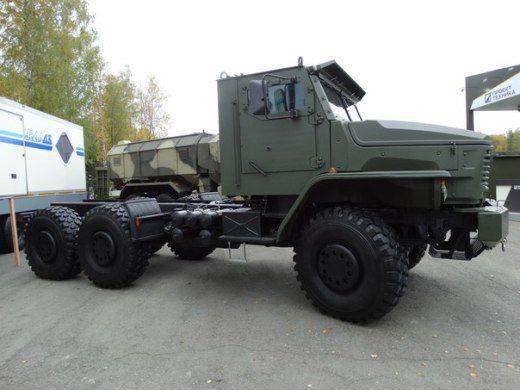 Instead of the basic frame-panel cab, the updated truck receives an armored module with a set of necessary equipment. In terms of its size and shape, the armored cabin is almost the same as its unprotected predecessor. So, the most noticeable external differences lie in the other glass frames in the doors, as well as in the presence of a central binding on the windshield. In addition, it is necessary to note the presence of a round hatch on the roof of the cabin. In the glazing of doors there are loopholes with flaps for the use of personal small arms.

Through the use of armor panels provides protection 2 class. The crew is protected from some small arms. In addition, the machine is able to protect the driver and accompanying from the blasting device under the wheel. According to the developer, in the future the Tornado-U truck may receive a set of additional booking modules. A set of such tools will bring the ballistic protection of the machine to the 4 class.

At the exhibition Russia Arms Expo 2015, the prototype of the protected truck Ural-63704-0010 was demonstrated in an abbreviated configuration. For some reason, it was decided not to equip this car with a body, as a result of which only the chassis with a cabin installed on it was present at the exhibition site. As in the case of the previous development of the family, an armored truck can be equipped with different types of bodies or vans, in accordance with the wishes of the customer.

Two new trucks "Tornado-U" are designed for use in the armed forces and are designed to solve the problem of transportation of goods or personnel. At the same time, two cars differ slightly in the roles offered to them. A truck with a frame-panel cabin, according to the authors of the project, should work at a great distance from the combat zone, where the equipment is not exposed to any risks. The car with an armored cab, in turn, is proposed for use in areas with difficult situations, where there is a risk of ambushes and sabotage with the use of explosive devices. In this case, the machine must ensure the survival of the crew and the possibility of leaving the shelling. 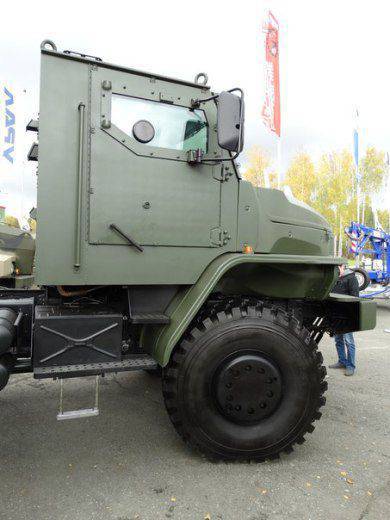 Trucks Ural-63704-0010 "Tornado-U" are of particular interest to domestic and foreign customers, but information about the signed contracts for their delivery is not yet available. Nevertheless, the automobile plant "Ural" already has plans for the future. The publication “Vzglyad” previously cited the words of Oleg Yakupov, the chief designer of the automobile plant for military equipment. According to the specialist, the final version of the promising truck was presented at the RAE-2015 exhibition. The main difference of the updated cars from those presented earlier is the rejection of some components of foreign production. In particular, the German transfer boxes were replaced by domestic ones. In addition, work is underway to replace the gearbox.

Currently, trucks of the new model are undergoing tests, the results of which will make a decision on their acceptance for supply. The first production machines of new types are planned to be handed over to customers in 2016. At the same time, the Ural plant intends to begin supplying equipment as part of the defense order. In the 2017 year, in the opinion of the plant management, the supply of new equipment should increase significantly.

The approximate dimensions of the order of the Russian military department have not yet been specified. In addition, plans to complete the ordered equipment remain unknown. Probably, the Ministry of Defense will order both unprotected trucks and armored cars. Details of these orders will be known later.