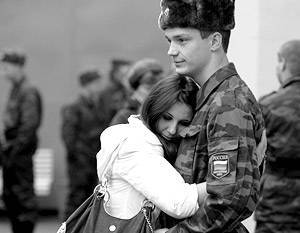 Preventative measures may be taken against army draft

About 200 thousand people in Russia evade conscription, said on Monday the head of the Main Organizational-Mobilization Directorate, Deputy Chief of General Staff Vasily Smirnov. Despite the difficulties, the Ministry of Defense will not increase the term of the emergency service.

“The earth must burn under the feet of the dodgers”

On Monday, the Ministry of Defense stated that it was determined to those who prefer to avoid military service in the army using long-calculated simple methods.

“Today, about 200 thousands of people evade military service by refusing to receive agendas or leaving places of residence for the period of the draft campaign,” said Vasily Smirnov, deputy chief of the General Staff of the Russian Armed Forces, at a press conference. - The problem of draftees is serious. If you bring the draft dodgers to the recruiting stations, the problem will be largely solved. The earth must burn under the feet of the draft dodgers. ”

“We believe that conscription should not be devalued. It should be attractive, ”says Smirnov. He recalled that originally it was planned to have 210 thousands of contract servicemen. In fact, the number of contractors has decreased slightly.

“This is a forced measure. In this way we want to raise their wages, ”ITAR-TASS quotes Smirnov.

In turn, the Head of the Office of the Main Military Prosecutor’s Office, Lieutenant General of Justice Alexander Nikitin, notes that thousands of people are brought to criminal responsibility for evading military service from 800 to 1 every year. So, according to Nikitin, last year there were 875 people who were dodgers.

A senior military official recalled that article 328 of the Criminal Code for such offenses criminalizes up to two years in prison, but in most cases a conditional sentence is given. At the same time, 16 800 young people who “decided to break the law” were brought to administrative responsibility for evading the army in the spring draft of this year.

The chief military prosecutor of Russia, Sergei Fridinsky, on July 18, stated that it is only possible to fight those who evade appearance at assembly points for service in the army, ensuring the inevitability of punishment.

Less is better, but better

On May 5, Russian President Dmitry Medvedev also said that the Russian authorities are not planning to extend the term of service in the army upon conscription.

Earlier in a number of media reports appeared that “the military leadership of the country is preparing public opinion for understanding that the reforms carried out since 2004 – 2005 related to the transition of troops to a professional basis and the reduction of the length of military service have failed.”

There is always an alternative

Meanwhile, the 242 man chose an alternative civilian service during the spring draft.

“There are draft dodgers who do not want to perform duties of either military or civil service,” Smirnov admitted. “There were over 340 people over the six years of alternative service life.”

During the spring draft, everything necessary was done to prevent young people with poor health from entering the army. “We made sure that citizens who were not properly examined (by medical commissions) did not get into the army,” Smirnov also said. “We are more than anyone interested in the fact that there are no patients in the army.”

In total, in the Armed Forces there will be no more than 20% of contract servicemen in the positions of soldiers and sergeants. At the same time, “this issue must be approached differentially. In Chechnya, for example, it will be 100%, in the Airborne Forces - up to 50%, ”explained Smirnov.