Petro Poroshenko approved the editorial board of the military doctrine, according to which Russia is the main threat to Ukraine

25 September 2015
74
President of Ukraine Petro Poroshenko today signed a decree that puts into effect the decision taken earlier by the National Security and Defense Council on a new version of the military doctrine. According to the document, the main military threat to Ukraine is the Russian Federation. In addition, the new doctrine emphasizes that Kiev refuses its non-aligned status and resumes its course in NATO, reports RIA "News". 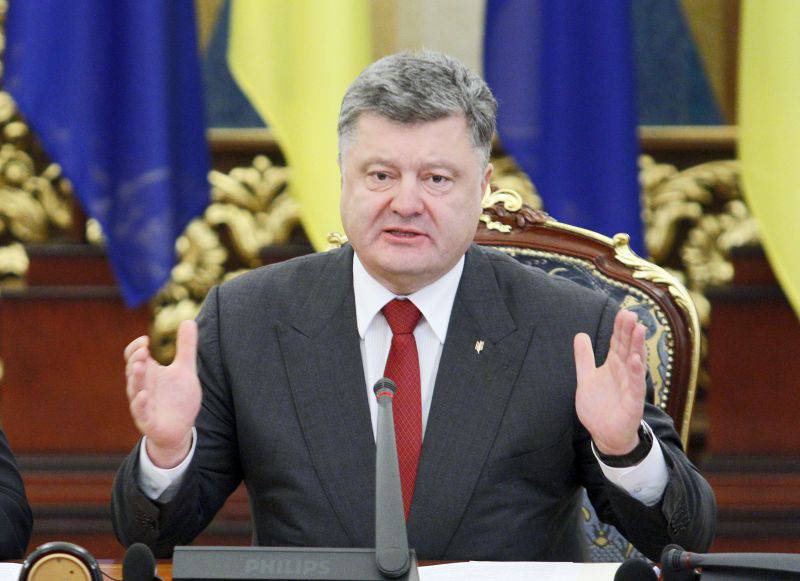 “The new military doctrine of Ukraine defines the Russian Federation as a military adversary of Ukraine and the conditions for the release of the temporarily occupied territories of Ukraine; proceeds from the high probability of large-scale use of military force against Ukraine as the main threat to Ukraine’s national security in the military sphere, ”the doctrine notes.

Kiev also accuses Moscow of “activating Russian intelligence services of intelligence and subversive activities in Ukraine” in order to destabilize the internal situation.

Also introducing a new version of the military doctrine Ukraine confirmed the refusal of Kiev from non-aligned status and the resumption of the course in NATO.

"The military doctrine stipulates that the key tasks of creating conditions for restoring state sovereignty and territorial integrity of Ukraine are the comprehensive reform of the national security system to a level acceptable for EU and NATO membership, the creation of an effective security and defense sector that provides sufficient national defense capabilities for repulse armed aggression. The development of the armed forces of Ukraine according to Western standards and the achievement of compatibility with the armed forces of the NATO member states are also determined, ”the doctrine says.

“Ukraine reserves the right to use all possible forms, methods and means of armed struggle to repel armed aggression, as well as to attack the enemy on its territory in compliance with the principles and norms of international law,” the doctrine stresses.

“Based on the principles of domestic and foreign policy, taking into account the nature of actual threats to national security, the main tasks of Ukraine’s military policy in the near future and in the medium term are: localization and neutralization of the military-political crisis in the eastern regions of Ukraine in the shortest time possible, preventing its development into a large-scale armed aggression, the elimination of unarmed armed groups and the restoration of full control over the state border of Ukraine ", - noted tsya in the document.

Ukraine reserves the right to use "all possible forms of repelling armed aggression", as well as deliver "strikes to the enemy on its territory."

"Ukraine reserves the right to use all possible forms, methods and means of warfare to repel armed aggression, as well as to strike the enemy on its territory in compliance with the principles and norms of international law," the military doctrine notes.

Ctrl Enter
Noticed a mistake Highlight text and press. Ctrl + Enter
We are
New Military Doctrine of the Russian FederationIn the center of Moscow a nest of “aliens” appeared: the installation with the eggs of the “fifth column” was exhibited in Novopushkinsky Square and at the editorial office of Echo of Moscow on the New
74 comments
Information
Dear reader, to leave comments on the publication, you must to register.