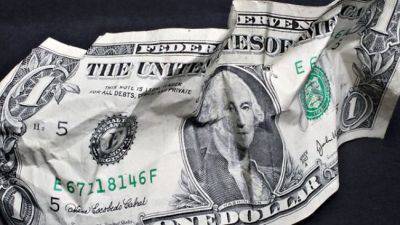 The theme of the coming "death of the dollar" is not new. Some experts say that there are so many dollars printed that if the truth about this is revealed, the kirdyk will immediately come to the US currency. Others argue that the dollar will bury a huge US national debt, which is growing endlessly. Still others think that the dollar will seriously crush the yuan - just as China in the world economy will press America.


In an article by Wolf Richter (Wolf Richter), published on the portal "Wolf Street", it is indicated that the world, holding its breath, is waiting for the “Death of the Dollar”. But will the dollar die?

Around everyone asks about the approaching "death of the dollar." Some people expect the demise of the American currency from day to day. There was a whole industry of soothsayers, talking about what would follow the collapse of the dollar. The advice of these gurus is a kind of insurance, the author believes, a senseless insurance of this kind, which is never useful to a person.

The dollar is not something supernatural; This is a piece of paper that people have come up with. The creation of man. Paper does not live "its own life." The dollar can be faked, it can be manipulated; it is an object for accounting, a way of saving and a means of circulation. You can change it, say, to Lexus.

In the long term, the analyst believes, the dollar will still lose its value. He just depreciate.

A strong dollar leads to chaos in emerging markets. The fact is that governments and corporations took out loans in dollars, trying to save on interest on payments. And what came of this "economy"? These unfortunates can no longer service their debts: their currencies collapse against the dollar, and it becomes very expensive to service accumulated debts. Debt holders may fail if someone does not give them more dollars.

Another important circumstance: a “strong” dollar suppresses US exports and at the same time increases imports.

What is the actual value of a dollar? This is his purchasing power at home. But how much can you buy a dollar in 1 in the States?

In the old days for a dollar you could spend the night in a hotel. Later, the Motel 6 network appeared: a standard room for the night cost 6 $ there. It was in the seventies of the last century. Now people do not even remember why this name - “Motel 6”.

The author notes in his memory only three quarters (during the financial crisis), when the published data showed: the purchasing power of the dollar is actually growing.

Investments in assets? They show that here the value of the dollar is rapidly falling, the author believes.

Now you need to spend $ 1,2 million to buy an average house in San Francisco or a two-bedroom apartment in a “so-so” neighborhood. In 1993, a similar average house in the same area would cost 250.000 $. Apartments did not get bigger or better; This dollar has fallen in value relative to other assets.

The same thing happened with stocks, bonds, cars, works of art: for a dollar you can buy a lot less than before.

It is curious, however, that the dollar is able to reverse the course of events: it suddenly rises in price in relation to such assets as stocks or real estate. It makes consumers nervous. They begin to talk about the “catastrophe” and try to get rid of these assets, which, in turn, leads to the strengthening of the dollar: it becomes the most desirable asset.

Earlier, the dollar dominated the world as a key currency (petrodollar is an excellent example).

There was a competitor - the euro. According to the analyst, the euro was created to counterbalance the hegemony of the dollar. In 2005, the eurozone had plenty of opportunities for a currency breakthrough. They even said that oil from Saudi Arabia is about to start buying for euros. Trade will be dedollarized. The euro has become the second largest trading currency in the world.

And what about today?

In a report from 1 September, SWIFT points out that in July 2015 43,6% of world payments were in dollars; 28,5% - in euros. These figures are very volatile, and there were months when the euro rose above the dollar. "Number three" was the British pound (8,7%). “Number Four” is the Japanese Yen (2,9%). And “number five” is the Chinese yuan (2,3%). The rise of the yuan occurred in Asia. However, "this is just a tiny grain of sand," the browser believes.

Thus, he concludes, the “dedollarization” of trade is indeed taking place. However, its pace is extremely slow. Probably, the dollar will remain for a long time (especially considering the size of the US economy) in the top three currencies involved in world trade.

Next - the continuation of the war with cash. Soon this money will become extinct. Young people, Richter writes, "do not even carry cash with them." Electronic payments prevail in trade. Anonymity when paying in cash is so expensive that it loses its meaning. Keep hundred dollar bills under the mattress? But this “will make the bed uneven,” the author exclaims. In short, a cash dollar someday will certainly die.

And if you look into the future? "The long-term fate of the dollar," the author believes, will go "down."

As for the present, we present some financial reports on the dollar and consumer activity in the United States.

The dollar continued to fall against other major currencies after the release of ambiguous US economic reports, reports Investing.com. The sentiment regarding the American currency remains low. The September index of 24, which shows the ratio of the US dollar against the basket of major currencies, fell by 0,44% (to 95,97), falling from the one-month maximum of 96,65 reached the previous day.

According to the US Department of Commerce, the volume of orders for durable goods last month fell by 2,0%.

It looks like there are really no bright prospects.