Japanese helicopter carriers: a threat to the Kuril Islands 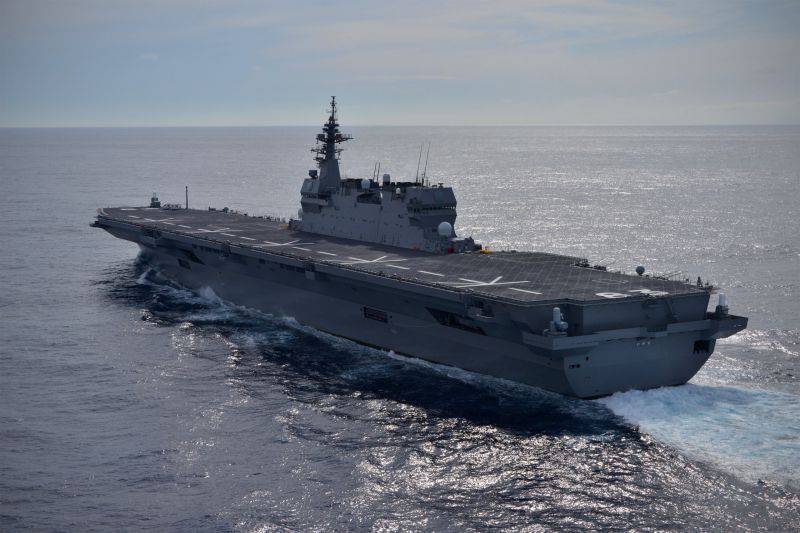 The destroyer "Izumo" full displacement 27 thousand tons! Why do Japanese call destroyers of these large aircraft carriers with a solid flight deck, being careful not to call things by their proper names?

There is no secret in the classification itself. Mine-artillery ships weapons They are a thing of the past, while the terminology is preserved. Modern names have not taken root. Here destroyers grow to the size of aircraft carriers.

Classification is usually conditional. Ships of similar size can have a sharp contrast in functionality. Thus, domestic destroyers evolved into large anti-submarine ships (BOD). Destroyers of the western countries are positioned as air defense escort ships. As part of Japan’s naval self-defense forces, such a class as “destroyers-helicopter carriers” was traditionally present, similar in appearance and designation to Soviet anti-submarine cruisers of the “Moscow” type. 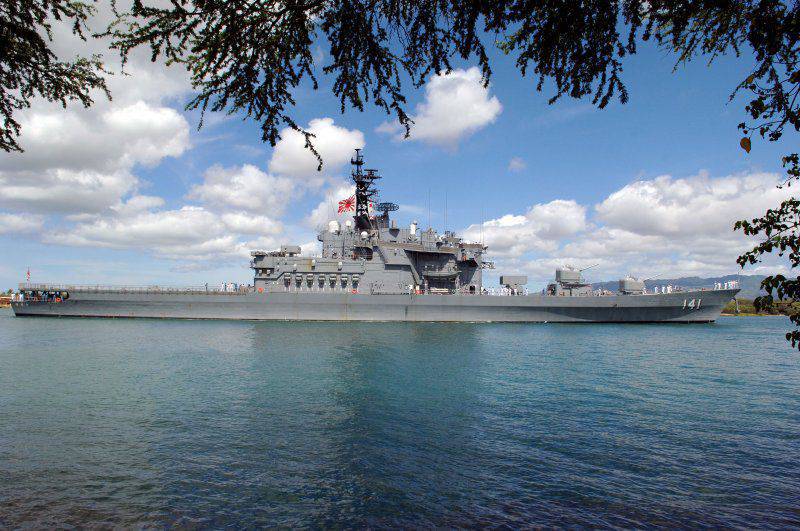 By the end of the last century, the limited capabilities of the old “Haruna” and “Shirane” forced the JMSDF management to think about the creation of new ships with advanced capabilities for aircraft basing. However, this desire went too far beyond the ban on the possession of offensive weapons. An attempt to create an aircraft carrier could initiate complications in international relations and undermine the image of Japan as a peace-loving country “Permanently renouncing the use of armed force as a means of resolving international disputes” (Constitution, Article 9).

The JMSDF leadership was forced to search for district routes, disguising its intentions in streams of obvious and unscrupulous lies.

In 1998-2003 The Japanese fleet was replenished with three tank-landing ships of the Osumi type. Military experts immediately noted the oddities in their design. “Osumi” is deprived of the main feature of tank landing ships - the bow ramp for landing armored vehicles. At the same time, the presence of the 170-meter flight deck and stern dock camera brings Osumi closer in capabilities to universal landing craft like the French Mistral.

The Japanese themselves claim that the “Osumi” are intended to drop troops on their own territory (!) In order to redeploy military equipment in the event of a war. Which is partly confirmed by the geography of the island nation. In addition, the small helicopter carrier is deprived of a hangar deck and is not intended for long-term deployment of aircraft. 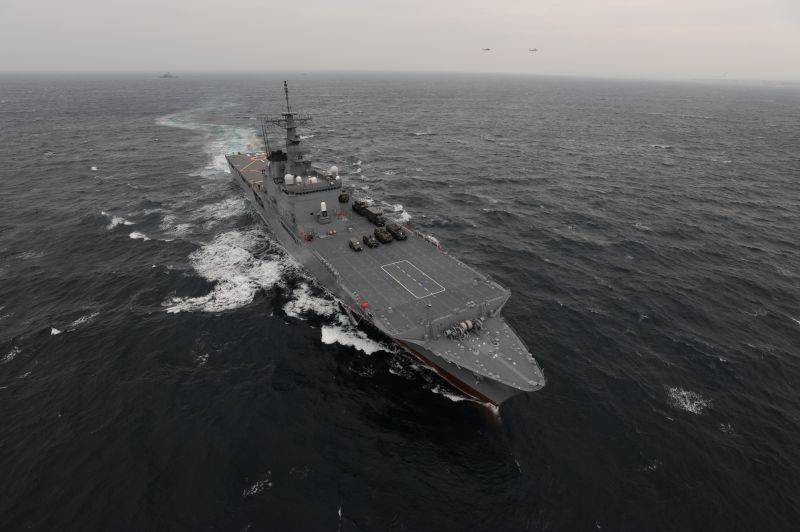 The first attempt to create a large aircraft carrier did not meet with resistance from the international community. And the Japanese ventured to continue work in this direction.

In 2006, Hyuga was laid. Supereminer with a continuous flight deck and many characteristic features of aircraft carrying ships, incl. hangar deck and two lifts. 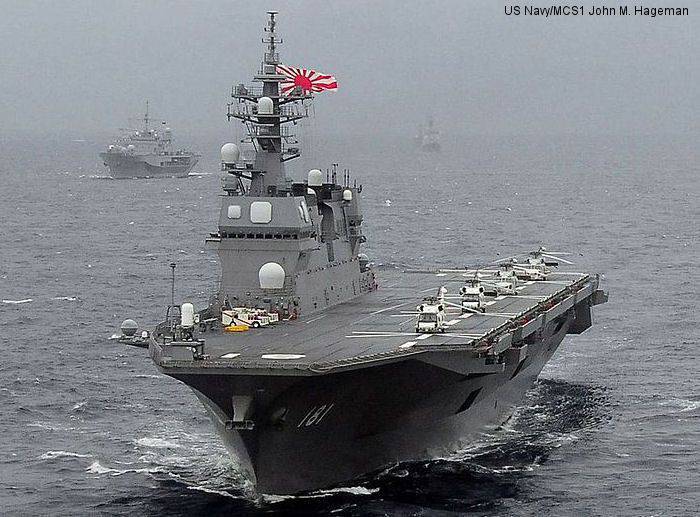 In general, despite the scandalousness of his image, “Hyuga” was a harmless design with minimal offensive potential. 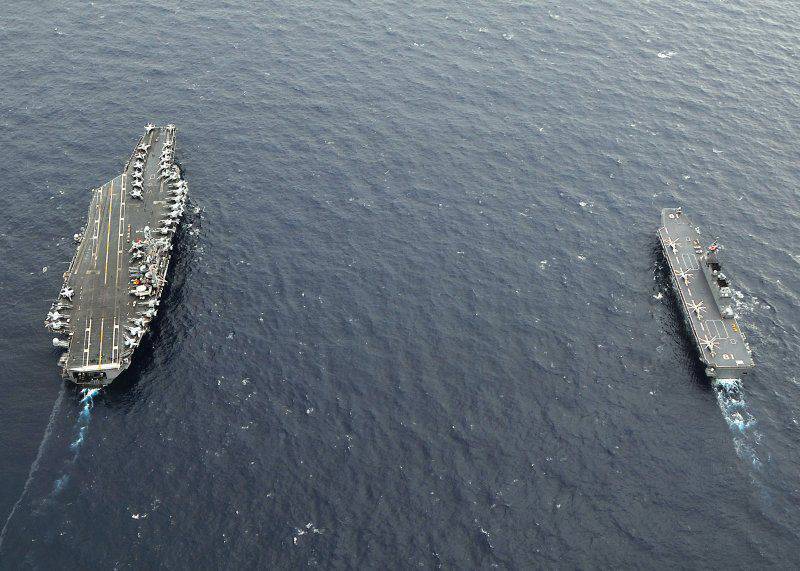 The Japanese helicopter carrier is still too small to accommodate modern fighter-bomber on board, and it does not have any means to simplify the take-off and landing of aircraft. Neither the characteristic “springboard”, nor the catapults, nor the arresting gear.

From similar in appearance and size of helicopter carriers - amphibious "Mistral", the Japanese "destroyer" is distinguished by high speed (up to 30 units) and the absence of a stern dock for amphibious armored vehicles and amphibious boats.

Finally, solid built-in weapons (16 rocket mines, typical ammunition - 12 anti-submarine missiles and 16 anti-aircraft ESSM) under the control of the ATECS control unit (Japanese analogue of Ajis). Also the newest radar with eight active phased antennas (four for detection, four for missile guidance). For self-defense in the near zone, a pair of six-barrel “Falanxes” and six TAs are used to launch small-sized anti-submarine torpedoes.

Established air group - up to 16 anti-submarine and multi-purpose helicopters type SH-60 or MCH-101. In 2013, the possibility of basing the American convertiplane V-22 Osprey aboard the Hugues was demonstrated.

The appearance, dimensions and characteristics of “Hyugi”, in general, confirm its stated purpose. Anti-submarine ship with hidden amphibious potential. In peacetime - search and rescue missions and sentinel service on the high seas. In the military - the transfer and dropping from the air of the personnel of the self-defense forces of Japan. Where? The Japanese leadership does not give a clear answer to this question.

A much more sinister event was the appearance of the following type of Japanese destroyer-helicopter carriers - 22DDH Izumo.

Names for new ships picked up what you need!

“Izumo” - in honor of the armored cruiser, a member of the Tsushima battle, later famous for his treacherous attack on the British and American ships in Shanghai (December 8 battle 1941 of the year).

The second helicopter destroyer, launched in August of this year, was named Kaga. In memory of the strike aircraft carrier whose aircraft bombed Pearl Harbor. 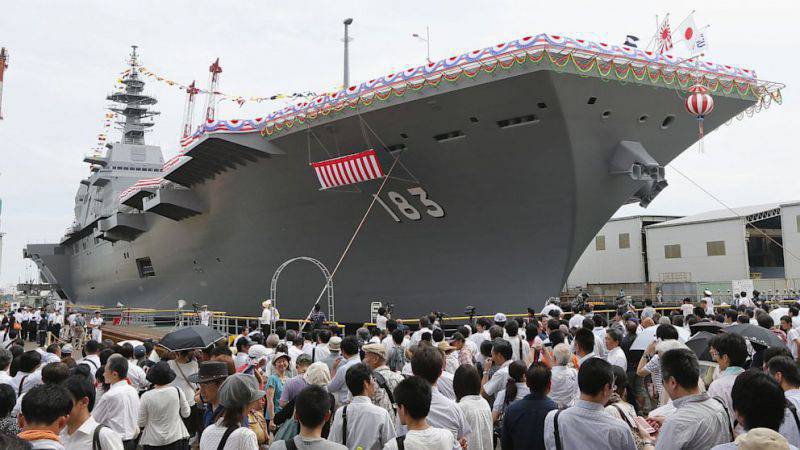 Izumo is really amazing with its size. In length, it exceeds the British lightweight aircraft carrier Invincible by 40 meters. Its regular crew is 470 people, while the actual number of military personnel on board (including aviation technical personnel and airborne troops) can exceed a thousand people.

The four turbines of the General Electric LM2500 disperse the whopper to the 30 nodes.

Despite its steepness, the destroyer is equipped with a “trimmed” version of the radar FCS-3 with four surveillance AFAR (without the ability to control rocket weapons, which, moreover, is absent). The creators of Izumo completely abandoned any built-in weapons (with the exception of Phalanxes and SeaRAM self-defense complexes).

The staff of the air group - seven anti-submarine and two search and rescue helicopters. This is a lot for such ships with a solid flight deck with a length of 248 meters.

What will really stand on the flight deck and in the Izumo hangar?

Most likely - fighters with a short takeoff and landing. That is, the American F-35.

But do not rush to draw conclusions!

It is known that Japan does not possess any VTOLV and even in the future it is not planned to purchase such equipment. The Japanese contract for the supply of F-35 (42 aircraft) includes only vehicles of modification “A”, i.e. conventional fighter-bombers with a classic airfield base. The creation of VTOL by own forces is unlikely and is not advertised anywhere.

In addition, despite its size, the helicopter destroyer Izumo, as well as the Hyuga, is devoid of catapults and take-off jumps. What makes it impossible to take off from its deck ship planes like “Super-Hornet”.

There is a threat of participation of Izumo in the next international operation to eliminate undesirable countries in the Middle East, with the deployment of the US Marine Corps on F-35B (as on the amphibious Wospah and the Americas). But we have to admit that such a scenario is unlikely. Japan would not create a special aircraft carrier for wars in the Middle East, while its overlord has enough aircraft carriers of its own.

Japan has two eternal problems. North Korea and the Kuriles. Not so long ago, a third one appeared - China, the economic confrontation with which took the form of a conflict over the disputed Senkaku Islands.

Admittedly, the tank-landing Osumi, like the more modern Hyuuga and Izumo, is of little use for war with Comrade Kim or for a serious confrontation with the Chinese fleet.

Obviously, the main purpose of creating these “destroyers” was to ensure the possibility of landing on the sparsely populated islands and taking control of the Kuril Ridge. At the same time, the flexible composition of air groups makes it possible to place on board a sufficient number of anti-submarine helicopters to neutralize the domestic submarine fleet - the only threat in the chosen direction.

It is in this format that the capabilities of seven Japanese helicopter carriers are best realized.

The only thing that remains to be added within the meaning of this article is the incredible, by domestic standards, construction time. “Hyuga” and its “Ise” sisership were laid and put into operation in less than three years. Moreover, as was indicated in the description of the destroyer-helicopter carrier, this is not about “ferries”, such as “Mistral”, which are built using the technologies of civil shipbuilding.

“Hyuga” - there is a full-fledged warship, when looking at which lines from The Destroyers are recalled:

Herd a hundred thousand horses
A single will is compressed.
The enemy will choose from all paths
One - to the bottom and to hell!
Good luck to those who will live.
See you - who will die.
It is God's work for us to administer!
Before communication. And go!

Helicopter destroyer with a huge power plant, rocket weapons and a modern set of fire detection and control, which would envy a different missile cruiser.

Japanese shipyards threshing equipment with terrifying speed. Over the past 10 years, the JMSDF has been supplemented with 10 destroyers (missile and aircraft carriers), a military icebreaker and nine multipurpose submarines (including the six newest “Soryu” - with an air-independent Stirling engine, whose capabilities are comparable to nuclear powered ships).

The pace of construction of a much larger (albeit more primitive in equipment than the “Hyuga”) Izumo helicopter destroyer also made up only three years. At the same time, its value amounted to 114 billion yen (1,2 billion dollars) - which looks quite reasonable for a ship of this size and destination.

Like a hundred years ago, mockery of the "macaques" can be costly for our country. Japan is a competent and strong opponent. And the greater the honor will be if we are able to keep the balance of forces with her on the same level. 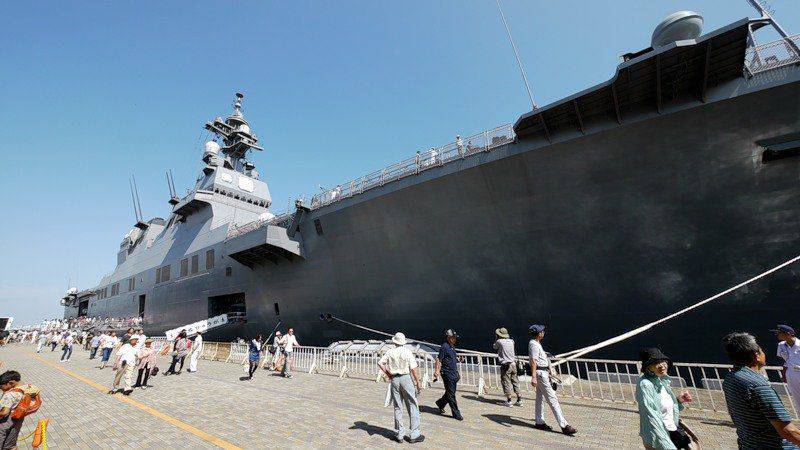 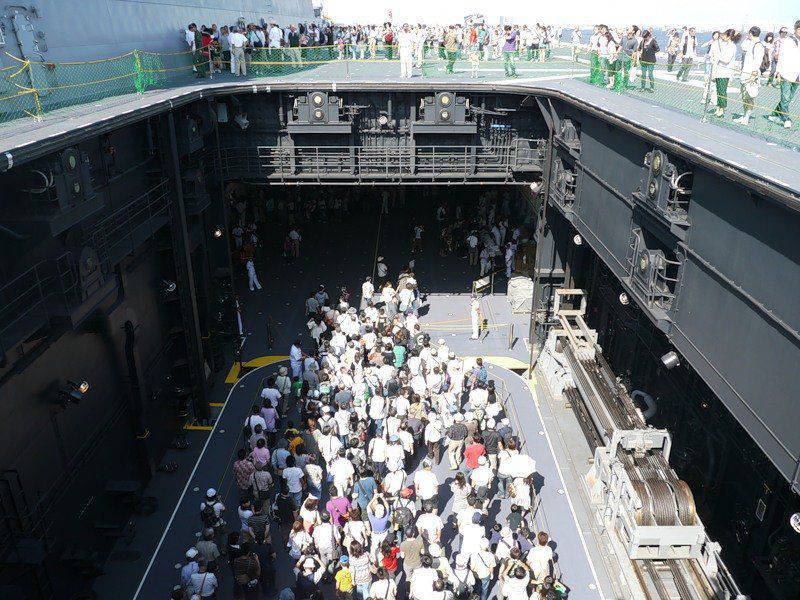 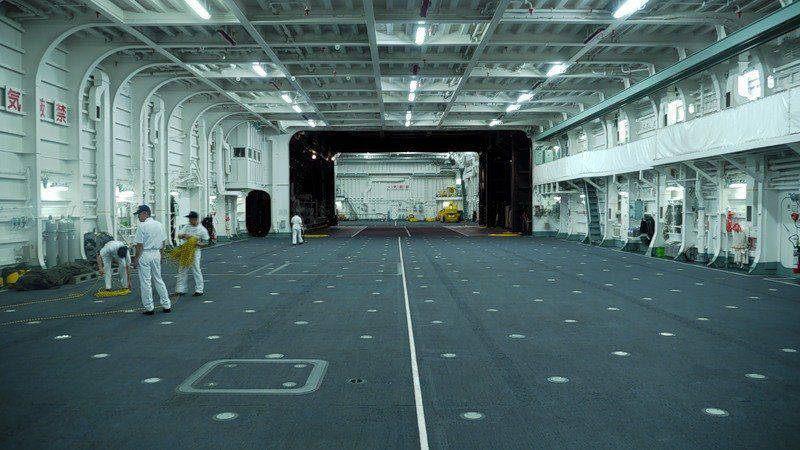 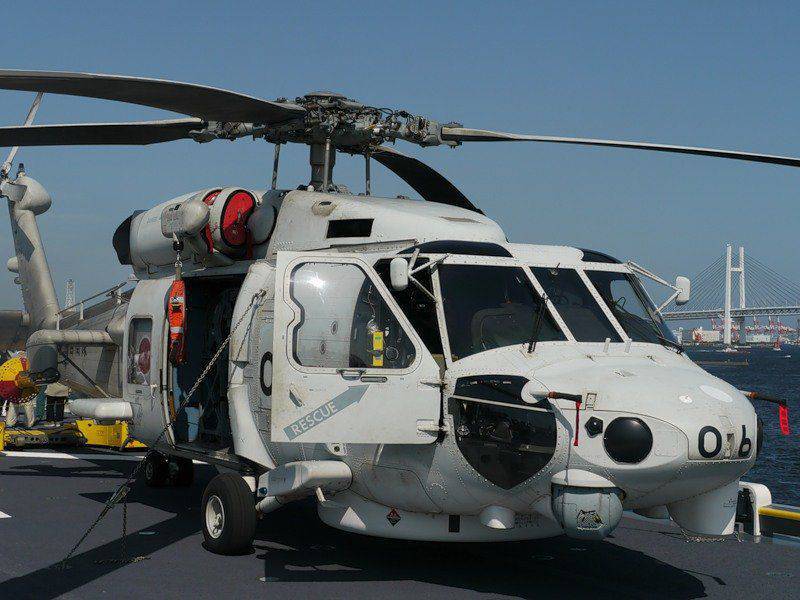 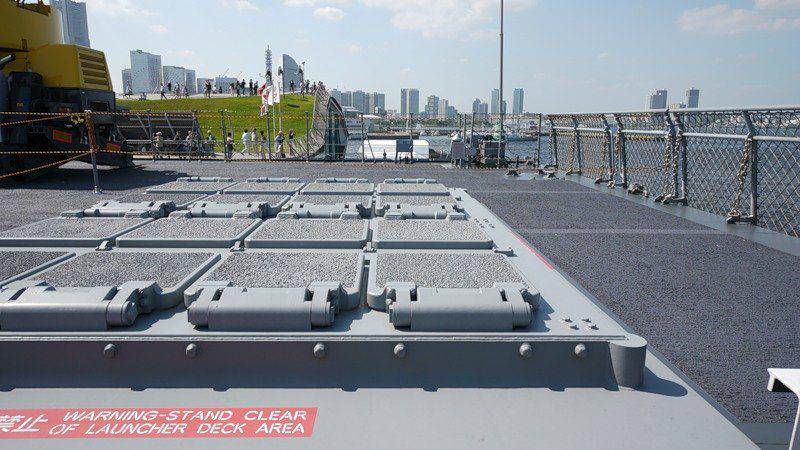 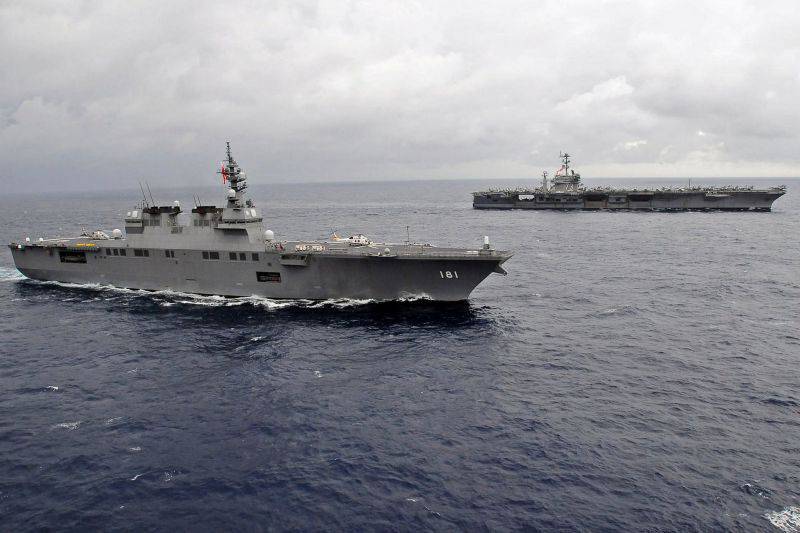 We are in Yandex Zen
Large anti-submarine ships of the USSR Navy
"SEA BREEZE 2012" - press tour on the destroyer USS JASON DUNHAM
150 comments
Information
Dear reader, to leave comments on the publication, you must to register.