Russia as the savior of Europe 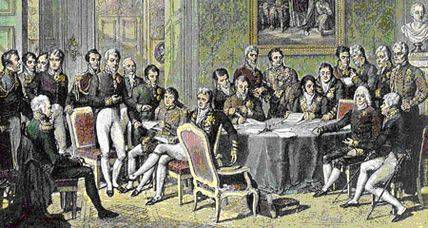 200 years ago, 26 September 1815, Austria, Prussia and Russia entered into a Holy Alliance. The ideological inspirer of the Union was the Russian emperor Alexander I, who, through such an agreement, planned to eliminate the possibility of military clashes between monarchist Christian states. The sacred alliance, which was concluded after the collapse of Napoleon’s empire, was to prevent the emergence of a new big war in Europe, preserve the established order and suppress the revolutionary movements in Europe that could destroy the old world.


Alexander I, inspired by the victory over the French in 1812, formed a new coalition and defeated Napoleon. 31 March 1814, the Russian army entered Paris. Alexander I was experiencing that day his finest hour, the apogee of greatness, glory and happiness. He avenged the shame of Austerlitz, the terrible lesson of Friedland, the humiliation of Tilsit and the fire of Moscow. Contemporaries called Alexander I the "King of Kings", the winner of the antichrist, the liberator of Europe. European capitals enthusiastically welcomed the Russian Cossacks and the Tsar Liberator. Even the people of Paris greeted him with flowers. The main square of Berlin is named after him - Alexander Platz.

Not surprising. Russia still remembers the victories of the Great Patriotic War. But victories are almost forgotten, and the defeats of the times of the Russian Empire, except for the loudest ones. But the confrontation of France with all of Europe was actually a world war in which the future of the whole world was decided. Then on the battlefields of Europe, Asia and America, millions of armies clashed and the question of the future world order was decided.

In September 1814, the victorious monarchs gathered at a congress in Vienna to redistribute Europe liberated from Napoleon. The Congress of Vienna was the most representative stories diplomacy: Europe sent there heads of 216 states, namely two emperors, five kings and 209 sovereigns of princely dignity. True, two hundred dwarf principalities, dukedoms, and electors were extras. All affairs at the congress were solved by the quintet of the great powers - Russia, England, Austria, Prussia and the royal France adopted on their Wednesday. Inside the quintet, the main role was played by Emperor Alexander I.

As always happens when sharing production, the winners of Napoleon began to quarrel: Austria with Prussia - because of the leadership in Germany and the redistribution of local territories; Prussia with England - because of Saxony, and all of them with Russia - because of Poland. Petersburg wanted to add the Duchy of Warsaw entirely to itself. “I conquered the duchy,” said Alexander I, “and I have 480 thousand soldiers to defend him.” But England, Prussia and Austria did not want to strengthen Russia. Things reached the point that 3 January 1815 England, Austria and France concluded a secret treaty and prepared a plan for a military campaign against Russia and Prussia. A new big war was planned to begin by the end of March. The commander-in-chief of the troops of the three powers was also appointed — the same prince K. F. Schwarzenberg, who fought Napoleon. Only "100 days of Napoleon", when the French emperor with a handful of soldiers landed in Europe and without a single shot took Paris, under the enthusiastic greetings of almost all segments of the population, stopped the new global confrontation.

The news of the return of Napoleon frightened and rallied former allies. In fact, Napoleon stopped the great war of the European powers against Russia with his action. The enemies of Russia got scared, Napoleon terrified them. They were afraid of his fame, as the masses followed him. All of them immediately forgot about the strife (or rather, put it aside for later) and remembered the Russian bayonets. The great powers declared Napoleon "the enemy of humanity" and created the 7-th anti-Napoleonic coalition. At this time, Napoleon managed to defeat without the participation of Russian troops.

The Congress of Vienna finished work shortly before Waterloo. His final act was signed on 9 on June 1815. Russia received the bulk of the Duchy of Warsaw under the name "Kingdom of Poland". In the same 1815, the city of Alexander I granted the Kingdom to the Polish Constitution and autonomy within the Russian Empire, although Russia itself did not have such rights and freedoms. Later, the Polish elite would “thank” Russia for a number of uprisings. Austria and Prussia divided between themselves the rest of the Duchy of Warsaw and acquired rich lands: Austria in Italy, Prussia in Saxony. England secured Malta, the Ionian Islands and a number of French colonies. France returned to the borders of 1792. But they didn’t take reparations from it. Alexander refuses to reparation from the bloodless and humiliated country. The allies were forced to submit to the will of the Russian tsar, and in turn refused to reparations. The monarchs, overthrown by the French Revolution and Napoleon, returned to the throne of France, as well as to other European thrones (in Spain, Piedmont, Roman region, Naples, German principalities).

Thus, the Congress of Vienna summed up the great war that lasted for almost two decades, restored the feudal absolutist order in Europe. And in order for Europe to have “order”, create a Holy Alliance.

This is now mainly remembered by history buffs, but in revolutionary France, an experiment was made to create a center of total ideology — anti-Christian, God-given, in essence. That ideology, which currently dominates in Europe, and led her to a complete degradation and to the brink of the death of European civilization and the white race in general.

The Freemasons and the Illuminati (“world backstage”, supranational structures of that time) had already prepared the draft of the New World Order. For the first time the war was preceded by propaganda of secret sects and mass psychological treatment of the population. The Illuminati Enlightenmentists worked tirelessly, creating controlled chaos that would lead to a new world order in Europe and then around the world. The Enlightenment Age ended with a revolution, a guillotine, bloody terror, and a world war. A part of the European intelligentsia welcomed Napoleon as a new Messiah, who would make the world revolution and unite all nations under his power.

The revolution was supposed to destroy the old world, to destroy the monarchy and religion. No wonder in the 1806, the Holy Synod of the Russian Orthodox Church betrayed Napoleon's anathema for his persecutions of the church. In all the churches of the Russian empire (Orthodox and Catholic), Napoleon was declared the antichrist and the "enemy of the human race."

However, the architects of the new global order were clearly rushed (or was it a trial balloon). First, the monarchical-aristocratic system has not yet outlived itself, especially in Austria, Prussia and Russia. He still had the potential for development. Secondly, Napoleon was not a limp puppet. In fact, in France there was a restoration of the monarchy. Napoleon entered the taste of the monarchy, created a new dynasty, turned the most dangerous revolutionary reforms. Napoleon refused the world revolution, so he was "written off". Third, Russia has stood in the way of the architects of the new world order. F. Engels later noted quite rightly: “The world revolution will be impossible as long as Russia exists”.

There was one more dangerous scenario for supranational structures. Union of Russia and France. This opportunity was marked by the emperor Paul and Napoleon was striving for this. Russia and France together could press England, establish their order in Europe and the world. However, this possibility was destroyed by the murder of Paul.

Alexander went the other way. He defended legitimacy, the traditional monarchy. Russia liberated Europe, the Russian Cossacks entered Paris. Alexander acted as an idealist. He spoke at the Congress of Vienna with an amazing proposal to build a new Europe based on evangelical principles. In Vienna, Tsar Alexander gives a definition of the rights of nations: they must rest on the covenants of the Holy Scriptures. The Russian tsar proposes in Austria to all monarchs and governments of Europe to abandon national egoism and Machiavellianism in foreign policy and sign the Charter of the Holy Alliance.

It is clear that it was idealism. But no one dared to go against him, as well as against Napoleon's winner. The Charter of the Holy Alliance will be signed by members of the 26 Congress on September 1815. The text was compiled personally by the emperor Alexander, and only slightly corrected by the Austrian emperor and the king of Prussia. The three monarchs, representing the three Christian branches: Orthodoxy (Russia), Catholicism (Austria) and Protestantism (Prussia), address the world in the preamble: “We solemnly declare that this act has no other purpose than to wish the whole world to show its unshakable the intention to choose as a rule, both in the internal management of their states and in relations with other governments, the commandments of the Holy religion, the commandments of justice, love, peacefulness, which are observed not only in private life, but must be led by a politician oh sovereigns, being the only means of strengthening human institutions and correcting their imperfections. ”

From 1815 to 1818, the Charter of the Holy Alliance was signed by fifty states. Up to the death of Alexander I in 1825, the heads of European governments met at congresses to coordinate their policies. England external supported the Union, but remained on the sidelines. This Union violated the plans of the Anglo-Saxons.

Thus, the victims of Russia in the war with Napoleon and the revolution allowed Europe to live in relative peace for several decades. For forty years, from 1815 to 1855 a year, Europe did not know serious wars. Metropolitan Filaret of Moscow spoke about the role of Russia in the world: "Russia's historical mission is the establishment of a moral order in Europe based on the evangelical precepts." In fact, he is right. The historical mission of the Russian civilization on the planet is to preserve the ethics of conscience, belonging to the Highest (Divine) principle and building a society of service and creation, where man is the vicar of God on Earth, and not a two-legged animal that satisfies his lusts.

Ctrl Enter
Noticed oshЫbku Highlight text and press. Ctrl + Enter
We are
Cossacks in World War 1812 of the year. Part III. Foreign tripChildren's alphabet about the 1812 war of the year, published in 1814
Military Reviewin Yandex News
Military Reviewin Google News
50 comments
Information
Dear reader, to leave comments on the publication, you must to register.