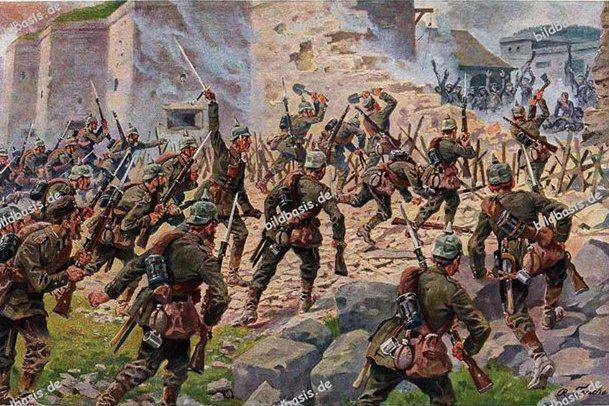 The tragic August of 1915, which became one of the most difficult months of the Great War for the Russian army - “the month of mass surrender”, as the well-known military historian A.A. Kersnovsky would later call it - was marked not only by severe defeats, but also by glorious feats. One of these exploits, somewhat sweetened by the bitterness of the inglorious surrender of Novogeorgievsk, was made by pilots of this fortress.

The Novorogievskaya fortress, located in 30 km from Warsaw, at the confluence of the Vistula and Nareva rivers, was left by the retreating Russian army to the mercy of fate. For some unknown reason, the North-Western Front command did not evacuate the garrison of this stronghold in time, leaving the Germans advancing around 90 thousand fighters from the militia infantry units. According to Kersnovsky, “having locked the whole huge crowd into the doomed fortress, the headquarters of the North-Western Front gave Hindenburg an entire army and presented the Germans with the keys of the fortress on a golden platter”. Not surprisingly, Novogeorgievsk survived only the 10 days of the German siege and 7 / 20 August capitulated. The commandant of the fortress, General N.P. Bobyr, ran to the enemy, the garrison, following the orders of his superior, surrendered to captivity ... The only consolation was the salvation of the banners of the garrison, which were evacuated by the Russian pilots before the fall of the fortress. 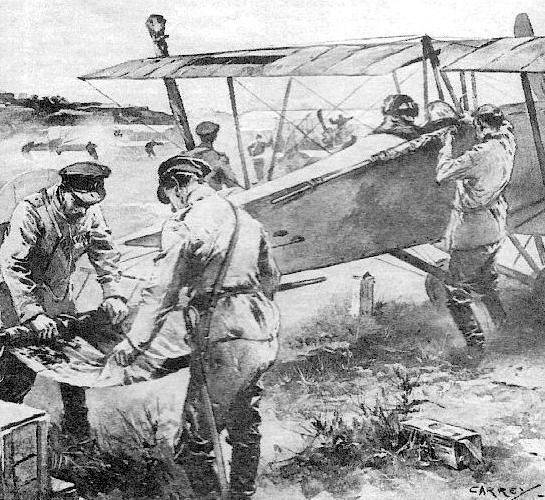 This event happened the day before the surrender of the New Georgievsk fortress. Military pilot Konstantin Konstantinovich Vakulovsky volunteered to save the banners of military units, secret documents and orders of the officers of the garrison. "6 August 1915, when the further abandonment of the vehicles in the besieged Novogeorgiyevsk became dangerous and an order of departure was received, Second Lieutenant Vakulovsky, together with an observer officer, offered the fort's chief of staff to take the fortress standards, as well as George's crosses, and after that oath promises to take all measures to destroy standards with him in the event of a flight failure, they received permission, ”the official document says. On the same day, taking advantage of the heavy fog, the pilots loaded the relics on the airplanes and went off to a risky flight almost blindly. The pilots had to fly around 300 km (of which 200 was over enemy territory) in order to get to the location of their units. And they succeeded! Under enemy fire, airplanes reached Bialystok.

In addition to KK Vakulovsky, the chief of the serf squadron, captain Yu.M. Kozmin, lieutenant BS Mrachkovsky, staff captain B. Svistunov, and infantrymen responsible for secret documents - ensign G .Tisvenko and the captain of the General Staff Radzin. For this feat, all participants of the flight were presented to the awards - the Order of St. George of the 4 degree and the St. George arms. As noted in the order for awarding Konstantin Vakulovsky, “despite the extremely difficult weather for the flight, fierce enemy fire on flying airplanes and a further dangerous path, when, due to heavy fog, it was necessary to fly from time to time at an altitude of 15-20 meters, being subjected to enemy rifle fire , the pilot after a five-hour flight, reached the location of our troops, surrendering the serfs to the headquarters of the front armies ". 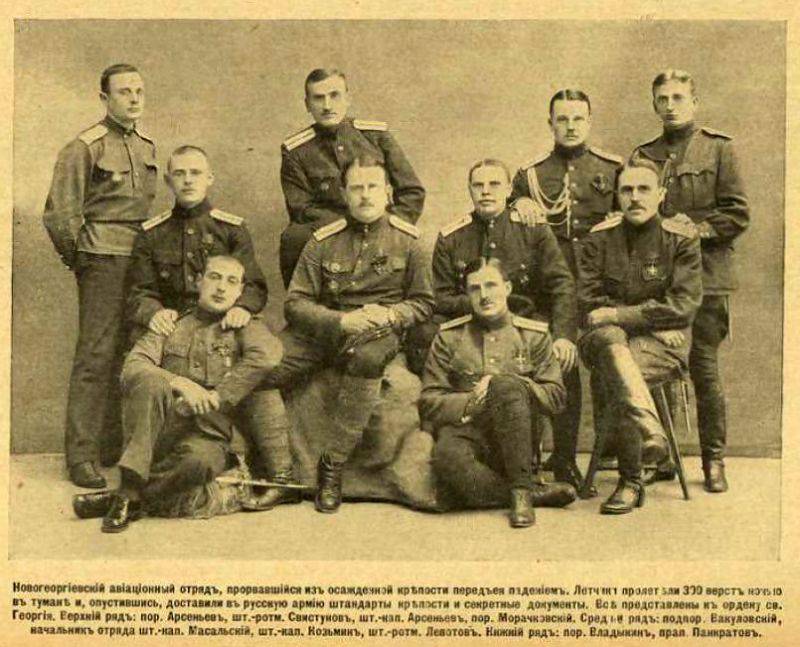 Unfortunately, we do not have information about all the heroes who took part in salvation of the honor of the Novogeorgiy fortress, but the biographies of some hero pilots are known and worthy of bringing them below. 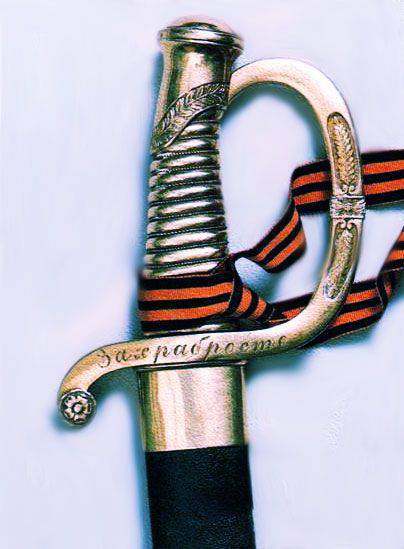 Yuri Mikhailovich Kozmin, commander of the squadron of the Novoyeorge Fortress, was born 21 December 1883 in the Penza province. Having graduated from the Nicholas Engineering School (1904), he, preferring to the flight engineer of the sapper flight business, decided to continue his studies at the Officer Aeronautical School. Having passed the exam, Kozmin was assigned to the 10 aeronautic company. In 1913 he served as a junior officer of the Brest-Litovsk fortress aviation detachment, in 1914 he led the 19 th corps squadron, and then he was sent to Novogeorgievskuyu fortress. As noted in the order for awarding staff captain Kozmin with St. George weapons “consisting in the 10 aeronautical company of the 33 aviation squad, on the night of 6 August 1915, having received an order from the commandant of the New George Fortress about the departure, he, as the property manager the air detachment, had to destroy all the spare vehicles and motors, workshops, cars, etc., which he carried out under the gaps of the enemy heavy shells, and only after that he and the observer officer flew out of the besieged fortress. The ascent was carried out under heavy fire of the enemy who was shooting at the rising vehicles; at that time, forts exploded and warehouses of firearms burned; despite this and the extremely difficult flight conditions due to heavy fog, gusty winds and shelling by the enemy on the way, he reached the disposition of our troops, rescued the officer and the apparatus, and delivered information about the besieged fortress ”. In December, Yu.M.Kuzmin's 1915 was transferred to the 7 aeronautic company. The pilot 23 died on May 1916 of the year from injuries received during an accident while making a training flight.

Konstantin Konstantinovich Vakulovsky, was born on October 28, 1894 in Vladikavkaz. After graduating from the cadet corps, he entered the Nikolaev Military Engineering School, from which he graduated with the rank of second lieutenant on July 20 / August 2, 1914, the day after Germany declared war on Russia. The young officer was identified as an adjutant in the mine company of the garrison of Novogeorgievskaya fortress. Here lieutenant Vakulovsky, visiting aviation courses with an aviation detachment in the fortress, mastered the specialties of an observer pilot and pilot. In April 1915, he was enlisted in the squadron, and on June 13, he was appointed military pilot of the Russian Imperial Army. For the salvation of the banners and documents of the young officer was awarded the Order of St. George 4th degree.

In the future, K. Vakulovsky, who enjoyed the personal protection of the Grand Duke Alexander Mikhailovich, successfully continued his service in aviation. For successful reconnaissance under the fire of the enemy in April 1916, he received a golden St. George weapon; in the spring of 1917, for attacking an enemy airfield, he earned the Order of St. Anne 2 Degree with swords; twice he was shot down, several times Vakulovsky was wounded. During the war years, Vakulovsky shot down five enemy airplanes. Noting the exploits of the pilot, the bosses in one of the award orders stated: "Without a doubt, this is one of our best pilots." The October Revolution Konstantin Vakulovsky met with the rank of colonel. Because of the resistance of the Bolsheviks, the hero pilot was arrested and miraculously escaped execution. Like his boss, Yu.M. Kozmin, Vakulovsky died a year later in a plane crash.

Boris Stanislavovich Mrachkovsky - an observer pilot of the Novogeorgievsky detachment - was born on October 4 1888 of the year in a bourgeois family in Kolpino, in the Tsarskoye Selo district of the St. Petersburg province. After graduating from 1910, the Military Topographical School, Mrachkovsky entered the service as a junior officer of the 4 Company of the Life Guards Pavlovsky Regiment. Having learned to be an observer pilot, lieutenant Mrachkovsky served with 1915 in the Novorgeyevsk fortress aviation squad. For participation in the salvation of the banners of the fortress, Boris Mrachkovsky was awarded the St. George weapons. As noted in the order, he was honored with this award because “on August 6 on 1915, when the order was issued for the departure of the entire detachment, he, along with the pilot, Second Lieutenant Vakulovsky, received serf standards, after the oath they gave, they would rather die and destroy shrines, rather than give the enemy, rose from the besieged fortress Novogeorgievsk, among the gaps of enemy shells and, despite the extremely difficult conditions for further flight, when due to fog had to fly very low, being fired at the enemy, Neely given word and saved their assigned banners, passing them in front of the headquarters. " Unfortunately, there are no details about the further fate of this pilot, but it is known that in 1917 he continued to serve in the 35 corps aviation squad, earning the Order of St. Anne 4, 3 and 2 with the swords, St. Stanislaus with swords and bow.

Boris Ivanovich Svistunov was born into a family of hereditary nobles in Moscow province. After receiving a military education in the Elisavetgrad Cavalry School, he was released to the Life Guards Horse Grenadier Regiment. Inspired by aviation, Svistunov graduated from a military aviation school in December 1914 and was appointed a military pilot of the 33 corps aviation squadron. Like Vakulovsky, Boris Svistunov was awarded the Order of St. George 4 degree because “6 August 1915, having received an order to fly out of Novogeorgievsk fortress, despite the fact that the given device was not tested and the flight conditions incredibly difficult because of the fog and shelling by the enemy not only on the way, but also by heavy artillery at the airfield, he, exhausted by two previous sorties, due to a malfunction of the apparatus, rose for the third time and, overcoming all obstacles, reached the same day a few hours later our locations Oi, thus rescuing the device and the best squad mechanics, and rising from the first aviation detachment, his example of selflessness and composure helped to further the success of the flight of the whole detachment. " Unfortunately, there is no information about the future fate of B.I. Svistunov. It is only known that in the 1917 year, he served as a captain and served as a training officer at the Military Aviation School.