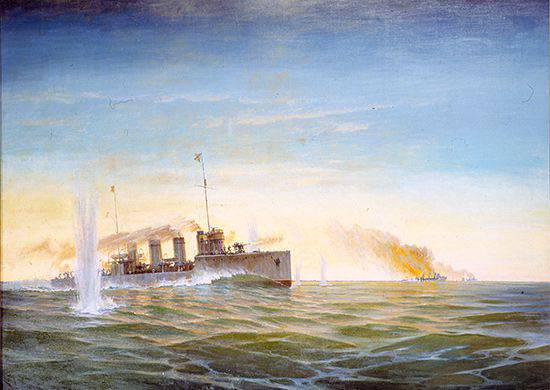 Moonsund (IRBENSKY) operation of 1915 (BATTLE FOR THE Gulf of Riga), the fighting of the Russian Naval Forces of the Gulf of Riga on July 26 (August 8) - on August 8 (21) during the First World War to repulse attempts to break through the German fleet to the Gulf of Riga and the mining of the Strait of Moonsund.

The events in defense of the Gulf of Riga, carried out by the Russian command in the spring and summer of 1915, thwarted the attempts of the German fleet to force the Irben Strait 21 – 23 in May (3 – 5 in June). Then the German command redeployed to the Baltic Sea from the North Sea significant forces of the High Sea Fleet, concentrating a ship group there, almost three times superior to the entire Russian fleet of the Baltic Sea.

The operational construction of the German naval forces included: 1 “breakthrough forces” (seven dodrednought battleships, two armored and four small cruisers, 24 destroyer, 35 minesweepers, minelayer and three firefighters; Vice-Admiral E. Schmidt) who were to break through The Gulf of Riga by the Irbensky Strait, destroy the Russian ships in the gulf, bar mine the southern exit from the Moonzund strait, block the Pernov harbor and make a demonstrative shelling of Ust-Dvinsk; 2) operational cover forces (eight dreadnought battleships, three linear and five small cruisers, 32 destroyers, 13 minesweepers and three Ute barriers; Vice-Admiral F. Hipper), who were to launch an artillery attack on the Russian-based base in Russian if the main forces of the Baltic Fleet leave the Gulf of Finland, defeat them. 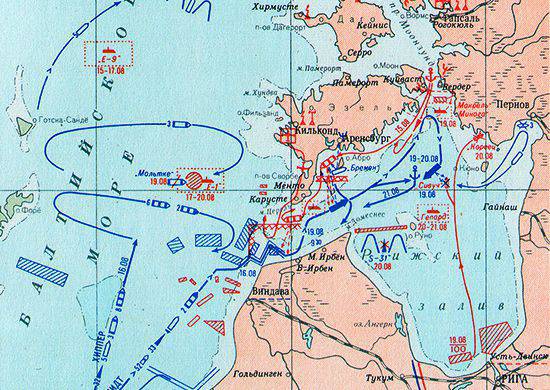 The theater of hostilities in the Gulf of Riga 3 (16) - 8 (21) in August 1915 g. Scheme.
The operation was given two days, the overall command was assigned to Schmidt. The bay was defended by the temporary fleet formation of the Baltic Fleet - the naval forces of the Gulf of Riga (the battleship Slava, 36 destroyers and destroyers, four gunboats, a minelayer, nine submarines and hydro-transport, captain 1 of the rank P.L. Trukhachev). Both sides used the hydroaviation, and the Germans - and Tepellin.

16 July (4 August), the German fleet began operational deployment, and around 4.00 20 July (8 August), minesweepers began to make passes in the minefields of the Irben Strait, but after exploding on the mines of the small cruiser Thetis, a destroyer and two minesweepers, the trawl was suspended.

In preparation for the new phase of the operation, the German command regrouped its forces and assigned the task of forcing the Irben breakthrough onto more modern ships — the dreadnoughts Posen, Nassau and four small cruisers. In Libau, seven old battleships were left as a reserve, the duration of the operation increased to five days. For their part, the Russians put up new minefields in the Irbene Strait and reinforced the garrison of Fr. Ezel. Commander of the Baltic Fleet, Vice Admiral V.A. Kanin changed the organization of the management of forces, subordinating the entire heterogeneous grouping in the Moronsund region to rear admiral A.S. Maximov. 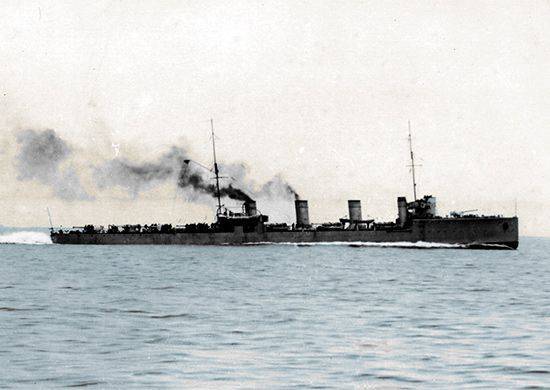 Squadron "Novik". Photo 1915
In the morning of August 3 (16), German minesweepers, under the cover of heavy ships, resumed work in the Irbene Strait, but were faced with effective resistance from the artillery of the Russian ships; one minesweeper died on a mine. On the night of 4 (17) in August, Vice-Admiral E. Schmidt sent the destroyers V99 and V100 to the Gulf of Riga to destroy Glory. The latter, near 4.15, near the Mikhailovsky Lighthouse entered into battle with the destroyer Novik (captain 2 of the rank of MA Behrens), as a result of which V99 was damaged and, having blown up on two mines, threw itself onto the shore. On the same day, the Germans resumed trawling, while the Russian ships, trying to counteract the minesweepers, retreated to Moonund under the fire of the battleships Posen, Nassau, which achieved three hits in Glory. 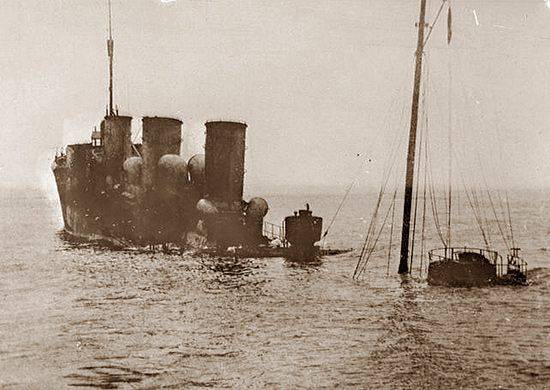 Submerged German destroyer V99.
To 9.30 6 (19) of August the German “breakthrough forces” entered the Gulf of Riga. The Sivuch and Koreian gunboats that remained in Ust-Dvinsk attempted to break into Moonzund, but were found near Xunchx by the ships of Schmidt near the island of Kuuno. Sivuch (captain of the 21.00 rank P. N. Cherkasov), who fought with the strongest opponent to the last possible opportunity, was sunk in 2, and the “Korean” was able to leave the battlefield, but the next day was blown up by the team at Cape Meris . The cruiser “Bremen” shelled Ahrensburg, and in the morning of 22.10 (7) in August, the entrance channel of Pernova was closed by three submerged firefighters and minefields. However, the main task, the barrage of the Minezund Strait - Schmidt, was to be abandoned due to the detection of the ship’s mine-protecting group by the Russian sentinel destroyers and their short skirmish with the cruiser Pillau.

The preservation of the mine danger, the threat from the submarines, the noticeable reduction in the combat effectiveness of the destroyers and especially the minesweepers, the lack of fuel on the heavy ships of the operational cover forces led Schmidt to the decision to leave the Gulf of Riga 8 (21) of August. Damage to the Moltke battle cruiser from the Hipper group played a role in the torpedo attack of the British submarine E1 (Commander N. Lawrence) in the morning of August 6 (19).

During the operation, the German fleet suffered significant losses: the 2 destroyer, the minesweeper 3 and the barrier breaker were sunk by mines and sank; damage to the battle cruisers Moltke and Von der Tann, two small cruisers, two destroyers and a minesweeper. The Germans lost and wounded 65 people lost. From the Russians, two gunboats were sunk, the battleship Slava and three destroyers were damaged; About 150 people are killed, injured and captured. Several light-tonnage cargo ships were destroyed and damage was done to coastal facilities.

The goals of the operation by the Germans were not achieved; subsequently, the Russian fleet continued to provide effective assistance to the troops of the 12th army in the Riga sector. The failure of the Germans was predetermined by both an inconsistent operational plan (the breakthrough of a mine position in the coastal waters of the enemy by forces of the fleet alone was deprived of operational expediency due to the inability to hold the captured area for an operatively significant period of time), and by a number of erroneous tactical decisions (underestimation of the value of minefields in the defense system of the Irben position; incorrect determination of the number of minesweepers required to force a defensive fence in conditions against Russian ship artillery action, and as a result, incorrect determination operation duration; poor organization intelligence primarily mine). Both opponents were widely used aviation, which for the first time at the Baltic Theater solved not only reconnaissance, but also shock missions.

Ctrl Enter
Noticed a mistake Highlight text and press. Ctrl + Enter
We are
Moonsund. Part of 1Russo-Japanese War 1904-1905's. State of the Russian fleet. Bad luck and missed opportunities
8 comments
Information
Dear reader, to leave comments on the publication, you must to register.