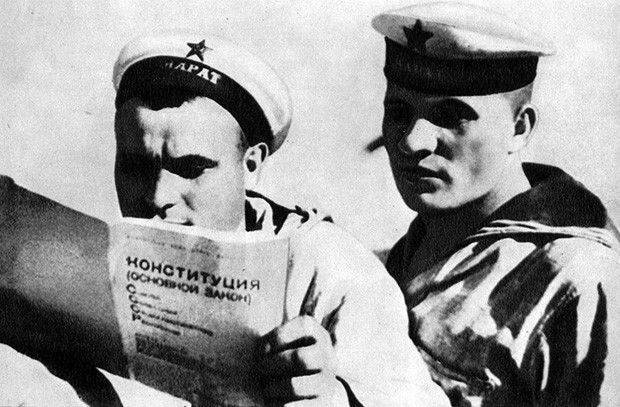 The first USSR Constitution marked the reunification of parts of the empire after an uneasy "divorce" process.

The Declaration adopted by the I Congress of Soviets of the USSR in December 1922 and the Treaty on the formation of the union of the four republics proclaimed the appearance on the map of the new power: the RSFSR (Russia), the Ukrainian SSR (Ukraine), the BSSR (Belarus) and the TSFSR (Transcaucasia, which included Georgia, Armenia and Azerbaijan ) united in a single state - the Union of Soviet Socialist Republics. The Central Asian territories were part of the RSFSR in the form of two autonomous republics - Turkestan and Kirgiz. In the composition of the Union republics stood Tatarskaya, Yakutsk, Dagestan and other autonomies. The treaty provided for the creation of all-Union state bodies and outlined their functions.

It must be said that by the time this decision was made, each of the republics had their own constitution, and they were not canceled, but were supposed to supplement the Basic Law of the USSR. The question of the relationship of powers between the federal and republican bodies remained acute, despite the fact that many functions were transferred to the authority of the union center as early as the 1918 – 1919 years. Thus, the People's Commissars of the RSFSR were in charge of many branches of industry in the republics, primarily the heavy and defense industries, and its financing was carried out by the Supreme Council of the National Economy (SEC) of the RSFSR. In addition, there were prerequisites for the centralization of financial systems, transport, and supply: for example, the Supreme Economic Council of the RSFSR developed a production plan for Russia and Ukraine that was common for raw materials and commodity stocks. The republics sent their delegates to the All-Russian congresses of the Soviets and even to the All-Russian Central Executive Committee.

For the development of the All-Union Basic Law, six special commissions were formed. The first dealt with the authorities - defined the powers in the new state of the Council of People's Commissars, the Council of Labor and Defense and the future USSR Commissariat, and also thought about the mechanism of interaction between them. The second commission was engaged in the development of the state budget, the third focused on the provisions of the Supreme Court of the USSR and the OGPU. The fourth worked on the symbols of the state - the flag and coat of arms. The fifth commission worked on the provision of the USSR CEC and, finally, the sixth was in charge of recruiting new government bodies.

Writing on a given topic

What was the first constitution? In fact, it was compiled from previously adopted documents - the Declaration and the Treaty on the formation of the USSR, but significantly expanded. Unlike the later constitutions, starting with Stalin, this document was mainly devoted to the issues of the administrative structure of the Union and the division of powers between its subjects. This was the main theme of the Constitution, almost the entire text is devoted to it. It completely lacked such characteristics of the social structure as the rights and duties of citizens, electoral law, local authorities and administrations. All these issues were governed by republican constitutions.

The introduction justified the need to create a common state: "Only in the Soviet camp, only under the dictatorship of the proletariat, rallying the majority of the population around itself, it was possible to completely destroy national oppression, create an atmosphere of mutual trust and lay the foundations for fraternal cooperation among nations." Further, the role that the coordinated actions of the Soviet republics played in ending the Civil War was noted, and it was emphasized that the restoration of the destroyed economy is a task that the republics can solve only by acting together.

An important argument in favor of the formation of a single state was the foreign policy situation - “the instability of the international situation and the danger of new attacks”. The Republic learned from the general resistance of the intervention. At the same time, the desire of a number of European powers, which took part in preparing and holding the Genoa Conference in April-May 1922, to establish political and economic relations with unrecognized Soviet Russia, became an essential international factor. 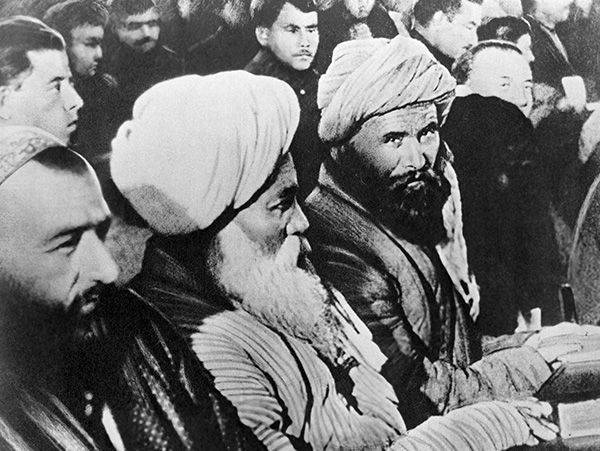 Delegates of the First Congress of the USSR, 1922 year. Photo: RIA News
In addition, the foundation of a single state was considered as the first step towards the victory of socialism on the entire planet: “the very structure of Soviet power, international in class nature, pushes the working masses of the Soviet republics onto the path of unification into one socialist family”. For the first time, the Constitution enshrined in law the full legal equality of all the peoples of the country - from now on, all its inhabitants received a single Union citizenship.

According to the Constitution, the Supreme body of the Union State was the Congress of Soviets of the USSR, consisting of delegates of city Soviets (1 deputy from 25 thousand voters) and provincial congresses of Soviets (1 deputy from 125 thousand inhabitants), and in the period between congresses he took over the other The body is the Central Executive Committee of the USSR (CEC). At the same time, the CEC could not, at its discretion, change the Constitution itself - this prerogative was retained by the Congress.

The central bodies assumed several important functions - they were engaged in diplomacy and foreign trade; had the exclusive right to declare war and make peace, as well as to lead the army; managed the economy and budget and their planning; took over the development of all-union laws. It is significant that the Constitution basically ignored the principle of separation of powers. For example, the Council of People's Commissars of the USSR, which was called in it the executive body, nevertheless had the right to issue decrees having the character of laws.

At the same time, the Constitution retained for the republics the powers enshrined in their own constitutions. So, without the will of their representatives, the boundaries between them could not be changed. The national languages ​​retained their significance: the decrees and resolutions of the CEC and the Council of People's Commissars were to be printed in the commonly used languages ​​of the Union republics - Russian, Ukrainian, Belarusian, Georgian, Armenian, and "Turkic-Tatar" (as the Azerbaijani document was called). Each Union Republic reserved the right to secede from the Union. In order to guarantee the representation of the national republics and the interests of their peoples, the second chamber of the CEC of the USSR - the Council of the Union - was added the second, which has the same rights - the Council of Nationalities.

The Constitution approved the main state symbols - the flag and emblem. If the final version of the flag was found easily — the socialists in Russia used red banners and paper cloth with slogans from the end of the 19th century, then they had to sweat over the coat of arms — there were about thirty sketches proposed by different artists. There was even a myth that the final touches to the final project were made by Lenin himself: the leader allegedly removed the sword from the drawing of the globe, leaving only the hammer and sickle there. Lenin explained his decision by saying that the Soviet government was only defending itself, but was not going to attack anyone.

The first Constitution of the Soviet Union consolidated the course towards the dictatorship of the proletariat at the scale of a single state, outlined the structure of society and, quite briefly, the rights and duties of citizens. The next Constitution of the USSR, adopted under Stalin in 1936, will differ noticeably from the first: “Stalinist” Basic Law will be devoted mainly to questions of the political structure of society. At the same time, he will affect a much wider range of problems, and the imprint of haste, under which the first Constitution of the USSR was adopted, will completely disappear from the “Stalinist” one.

Ctrl Enter
Noticed oshЫbku Highlight text and press. Ctrl + Enter
We are
Soviet Georgia: now it is called "occupation"90 years of the first Constitution of the USSR
Military Reviewin Yandex News
Military Reviewin Google News
4 comments
Information
Dear reader, to leave comments on the publication, you must sign in.