25 September 2015
171
The other day in the newspaper Kommersant There was a material devoted to the meeting in Novo-Ogaryovo on budget quotes. The central theme of the material was the initiative of the Ministry of Economic Development in the person of Alexei Ulyukayev about the withdrawal of the Russian economy to sustainable growth already in 2016. The Ministry of Economic Development believes that the policy of strengthening the national currency should lead to an increase in Russia's GDP. 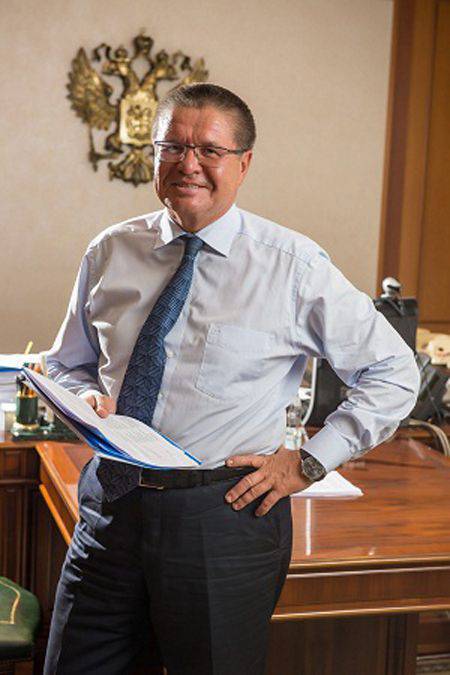 What are the arguments in favor of increasing the volume of investments offered by Ulyukayev? It turns out that now investors do not want to actively invest in projects in Russia, because, you see, they are concerned about the low rate of the Russian currency (for some reason, the relatively low rate, for example, of the Japanese currency does not frighten investors). But as soon as the ruble starts to grow, these most “anxious” investors will trooply run to transfer funds to accounts serving Russian projects, and the economy will go up, up and up again ...

The proposal of the Ministry of Economic Development is certainly interesting. It is so interesting that it pushes the question: if the “expensive” ruble is almost the only tool for attracting investments, according to the ministry, then why has the ministry been silent about it all this year? .. The ruble has been devalued more than twice as much against the background of a sharp decline in oil prices, but only such a process in the same economic “segment” of the government all this time has been declared positive. They say that the ruble mass of revenues to the budget has even grown; there is an opportunity (at least) to fulfill the basic social obligations in the presence of an obvious economic crisis (and not only in Russia).

Moreover, for the “correctly dropped” ruble and for, it seems, the preservation of the main potentials of the economy without simultaneously launching the process of “economic Ukrainization”, the head of the Bank of Russia was even awarded by foreign comrades, recognizing the best in the world. Did Minister Ulyukaev decide with his proposal on the need to strengthen the ruble to call into question the primacy of Elvira Sakhipzadovna?

So, back to the initiative of the Ministry of Economic Development. According to this initiative regarding the so-called target scenario, the ruble should increase by 2016% in 2, 2017% in 5,3, and 2018% in 4,8. That is, in the 2018, the dollar will be (well, the MER wants so much) to give somewhere around the 58,3 ruble. It turns out that everything is a matter of business ... - to back up a dollar for seven, and the Russian economy will rush into growth. Everything is so simple. In general, it’s strange that until now no one from the notorious economic segment of the government thought ... No one, except experts from the Ministry of Economic Development, who over the past year due to a number of external and internal factors have lost the objectivity of most of its name - the ministry seems to be like that and there is no economic development ... Of course, willy-nilly you start to think out ways out of the situation on the basis of numbers taken from the ceiling.

Although, why, actually, from the ceiling? Perhaps, Alexey Valentinovich, together with his subordinates, really found the “golden section” of the Russian economy and derived a formula with the presence of (for any) triple integrals and Laplace operators in spherical coordinates to determine the effective exchange rate of the Russian ruble ... If so, then for the Ministry of Economic Development and its the manual could be glad. But for some reason plagued by vague doubts. Firstly, because in order to grow the Russian economy and attract investments, it is proposed not to follow the path of production development with specific data on what, where and in what volumes it is necessary to build and launch in terms of production capacity. Secondly, because this is not the first forecast of Mr. Ulyukaev’s ministry, and this forecast has few chances, considering that none of the previous ones has come true ... I remember that the 2014 forecast was adjusted the 5-6 times, starting with 3,3% growth GDP, then lowering the bar to 2,2%, then to 1,5%, and completing the “accurate” forecast in 0,3%. Moreover, it is important that the appearance of such an accurate forecast in 0,3% of GDP growth and 0,3 itself almost coincided with the total growth over time ... Well, this is like weather forecasting for the next 10-15 minutes.

There is one more small idea from the MER, which was mentioned in Novo-Ogaryovo, and which should also be mentioned. It lies in the fact that the Russians have to cut costs. The idea outlined the Deputy Minister of Economic Development Alexei Vedev:

Improving the efficiency of the economy on the basis of stimulating investment demand by reducing current consumption.

The idea is also brilliant ... That is, for the development of the economy, you don’t need to work more and more efficiently and, accordingly, earn more, don’t bother about opening new jobs, stimulating entrepreneurship and domestic demand, but you need to “just” tighten the belts. .. Just a little bit: at the level of 0,1% -3,3% in 2016-2018. Eat less, use less gas, electricity, gasoline, turn on the water less often, speak more quietly, blink less often - save your calories, and you will receive foreign investment, and lower inflation, and in general - economic manna ...

Honestly, after such proposals of our leading economists, you start to think: if these are the leading ones, then who then, for the most part, graduate from our economic universities? Well, you need to manage to learn 5-6 for years to come to the conclusion that reducing consumption by the population will lead to a decrease in inflation ... For any Nobel Prize in economics - no other way ...

Sorry, but Russia definitely doesn’t have any other ways besides the artificial repulsion of the ruble and the “tightening of the belts”? ..

Ctrl Enter
Noticed a mistake Highlight text and press. Ctrl + Enter
We are
Project "ZZ". Poet under arrest, liberals at gunpoint?New plants and workshops in Russia in 2015 year
171 comment
Ad