25 September 2015
68
In recent days, domestic media published a number News on the development of strategic missile forces, namely, on the progress of the RS-26 Rubezh project. With reference to sources in the military department, a new adjustment was made to the timing of the start of service of promising missiles, as well as some upcoming events related to existing international treaties.


September 16 TASS news agency citing a source in the Ministry of Defense reported that at the end of this year, the defense industry will begin mass production of the new RS-26 inter-continental ballistic missile Rubezh, which will be supplied to the Strategic Missile Forces. The production of the first batch of missiles to retrofit one of the regiments will be completed next year. The first missiles of the new type will go into service with the Irkutsk Guards missile formation. In the future, promising missiles can be mastered by other Strategic Missile Forces compounds.

It should be noted that the approximate dates for the start of mass production and the adoption of new missiles were again changed. The first information on this subject appeared last summer. Then in the domestic press there were reports that the Irkutsk Strategic Missile Forces link should have been the first to receive the new weapons. At the very end of last year, the commander-in-chief of the strategic missile forces said that the RS-26 missiles would go into service in the 2016 year. In the spring of 2015, new messages appeared: this time the launch of the missile was set for the second half of the current year, and mass production was supposed to start no later than the start of the 2016 of the year. 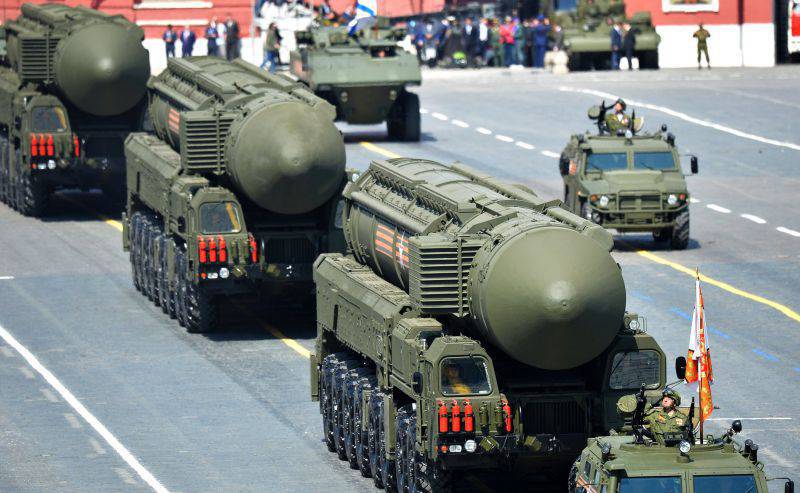 According to recent reports, the new Frontier missiles will go into series at the end of 2015 of the year, and in 2016 will begin to flow into one of the Strategic Missile Forces connections. Thus, despite some ambiguities and adjustment of plans, the timing of the deployment of production and the start of operation did not undergo major changes. In addition, we can assume that it is the latest data most closely correspond to the current plans of the Strategic Missile Forces. There are only three months left until the end of the year, so mass production of missiles can be launched very soon.

Before the adoption of the new ICBM, some special events are planned that are directly related to existing international agreements. In accordance with Article 5 of the Fifth Protocol to the START III Treaty on Inspection Activities, Russia and the United States must demonstrate to each other their new developments in the field of strategic weapons. Perspective PC-26 “Frontier” will not be an exception.

On September 21, the TASS agency, citing an unnamed source in the military, reported that in November a group of American specialists should visit the Votkinsk engineering plant, where ballistic missiles are being built for the Strategic Missile Forces. The purpose of this visit will be the demonstration of the latest ICBM RS-26, which is planned to be put into service in the near future. Inspectors from the United States for the first time will have the opportunity to familiarize themselves with another Russian-developed ballistic missile.

Foreign experts will be able to inspect the rocket, as well as receive some information about it. First of all, they will be explained how the new “Frontier” differs from previous Russian developments. Inspectors will also be able to measure the dimensions of the rocket to confirm the data presented on paper. In addition, on request, the American side can get photographs of the new rocket.

According to a Tass source, during the visit, the United States inspectors will face certain restrictions. So, the specialists will not be allowed to touch a promising product with their hands or to shoot using photo or video equipment, as well as various gadgets. In addition, at the Votkinsk plant, the delegation will show only the PC-26 rocket. The remaining elements of the Rubezh complex, such as a launcher and other special equipment, will not be shown to foreign specialists.

The visit of the Votkinsk engineering plant by the American delegation will last only one day. During this time, experts will study the product "Frontier" and will issue all the necessary documents. It is noted that in accordance with the current START III treaty, the American inspectors no longer work in Votkinsk on a permanent basis. The previous START I treaty provided for similar control measures, but it was decided in the new agreement to abandon them.

Inspection trip of foreign experts will allow to solve some legal issues, after which the new intercontinental rocket will be able to go to the troops. As already mentioned, the start of serial production of PC-26 rockets is scheduled for the last months of this year. In 2016, this is weapon entered service with the Irkutsk Guards missile compound.

According to available data, the Rubezh PC-26 project is a further development of the existing family of solid-propellant intercontinental ballistic missiles, as well as a deep modernization of the PC-24 “Yars” rocket already in use. According to various estimates, the new “Frontier” differs from “Yars” by different combat equipment in the form of a split head and some other characteristics.

The development of the Frontier project was completed at the beginning of this decade, the trials started in 2011 year. To date, five test launches have been completed, the first of which ended in an accident. The rest of the tests were successful. The last three launches at the moment, performed at the Kapustin Yar proving ground for conventional targets at the Sary-Shagan proving ground, have become a reason for criticism and accusations from foreign countries. During these launches, the range of missiles was significantly less than 5500 km required to classify the missile as an intercontinental class. As a result, the United States accused Russia of creating a medium-range missile, which contradicts one of the existing agreements.

According to recent reports, the PC-26 “Frontier” project is approaching a logical end. In the very near future, the rocket will be shown to foreign partners and will begin its mass production, after which the new weapons will begin to flow to the troops.