NATO cares about the world ...

25 September 2015
23
One of the topics of the week being discussed is the next stage of NATO activization, and specifically the USA in Central and Eastern Europe. While Berlin, Vienna, Prague, and other European capitals are breaking their heads and spears on how to "shove" refugees across all corners of the European Union, Washington and the puppet (controlled by Washington) top of the North Atlantic Alliance, under the guise, is trying to solve their own problems. In principle, the range of tasks of NATO is quite narrow and, in fact, remains unchanged since the creation of NATO: to bring its potentials closer to the borders of Russia, continuing to consider Russia as the “main threat to democracy”. And, despite the fact that NATO functionaries are now announcing "a long-standing reform of the goals and strategy of the alliance," NATO, as it was an anti-Russian military organization, possibly gathering the Russophobian masses under its wing, has remained so. 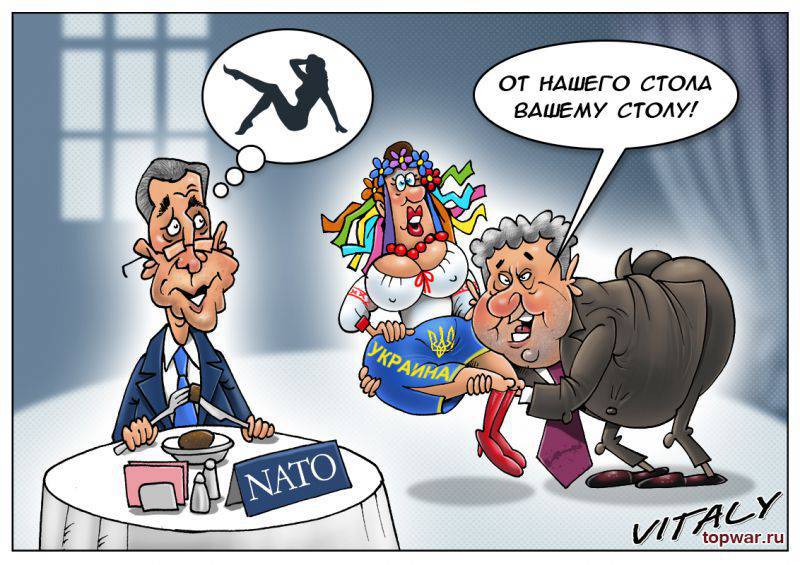 "Reformed" NATO against the background of media reports on the deployment of the latest American nuclear aviation B61-12 bombs and ongoing attempts to stake out territory with attacking potentials in the immediate vicinity of the Russian borders, Dmitry Peskov, press secretary of the President of the Russian Federation, commented this week (quoted by TK "Russia 24"):
NATO has not changed and is not able to change its purpose in terms of the original goals of its creation. We must not forget that this is an organization that was created in times of confrontation and for confrontation. And of course, any advancement of such an organization towards our borders leads to the need to take appropriate countermeasures to ensure their own security, for national security.
Of course, in Washington and Brussels, they once again stated that the Kremlin, they say, unnecessarily dramatizes the situation, and that only bright elves with transparent wings inhabit NATO. Moreover, the States, criticizing the Kremlin for "far-fetched conclusions", allowed themselves to announce that German journalists with statements about the location of B61-12 at the Büchel airbase got hot. A spokesman for the National Nuclear Security Administration said that the newest bombs would appear in Germany no earlier than 2020 of the year.

Yes? .. Strange, and ZDF published a document with the Pentagon’s budget expenditures on this kind of placement on 2015-2016 year ... Or, the document already after its appearance in the public domain had to be urgently corrected due to the possibility of permanently placing Russian Iskanders in the Kaliningrad region? They say, well, what else Iskanders do not need, do not - our “12-e-61” we will not pull the Germans soon ... But we will tighten ...

Now it is worth referring to the information that the North Atlantic Alliance itself publishes about itself. It is interesting to learn about what these "light elves" live today (declaratively, of course).

From the definition of NATO:
NATO is a political-military alliance.

As you can see, the “elves” in the first place have a term associated not with the military component, but with the political one. They say that first of all we implement the political functionality. This, of course, can be attributed to all sorts of "color" revolution (varying degrees of "velvety"), the purpose of which the organizers put the emergence in power of one or another country of forces loyal to Washington - countries bordering the Russian Federation and (or) within the scope of geopolitical interests of Russia.

And what ... That's right: advise - advise, promote - promote, and with all his might. Squeezes, pushes ...

But as for “in order to prevent conflicts”, then NATO is too openly a fake man. Well, tell me, gentlemen, atlantists, what specific conflict was the NATO functionaries avoided? Ah? .. Perhaps, in the phrase, the typesetter on the NATO website confused everything and instead of the word "unleashing" he used the word "prevention"? ..

Now - that NATO will tell us about the military component of the alliance.

MILITARY COMPONENT - NATO is committed to the peaceful resolution of disputes.

One sentence, and already stormy, unceasing applause! .. "Peaceful settlement of disputes"? - It's five! .. Five from the former Yugoslavia, from Libya, Iraq, etc.

It seems exactly as an irresistible desire to "peacefully resolve the dispute" Washington and is going to deliver to Germany (even in 2015, even in 2020) those same B61-12 ... Like, even if Russia is "hard planted" barely soared from the German airbase "Tornado "With these atomic bombs (according to 4" Hiroshima "in each"), it will be an occasion to declare that the United States wanted to bring the matter to peace, but "bloodthirsty Russia ruined everything again ..."

Next is a what-if specification from NATO:
If the efforts of the diplomats are unsuccessful, the organization has the military potential necessary to conduct crisis management operations. Such operations are carried out in accordance with Article 5 of the Washington Treaty - the founding treaty of NATO - either according to the UN mandate, the efforts of NATO itself, or in cooperation with other countries and international organizations.

In general, almost like a bearded joke:
Point one: "NATO is always aimed at peace"; Point two: "If NATO does not aim at peace, see point one."

Apparently, during his visit to Kiev, NATO Secretary General Stoltenberg again explained Poroshenko about the “mission” of NATO in this troubled world. And he explained somehow confusedly, or something else, but at first the ukropresident announced that Ukraine was not ready for NATO, and the alliance was also not ready for the adoption of the country, and following the results of Stoltenberg’s visit, Poroshenko announced that they say, it is ripe ... So, it turns out, what exactly sang in her song Zemfira, who suddenly became an ardent admirer of maydanut jumpers:
Someone is waiting for the station,
Someone waiting for home,
Nobody is waiting for her
Does not want her body!
It is easier for her not to say
It’s easier for her to be dumb
When she comes.
And the girl is ripe ...

Indeed, the body seems to be ripe for the use of atlantists, but no one is waiting for it (this “girl”) and doesn’t particularly want it ... They use it in a purely dosed manner - on its territory (hut ...). The only discrepancies are with the “dumb”, because this “mature girl” presented by Mr. Poroshenko is very shrill and constantly demands special attention ... And the “bright elves” want more and more without obligations, aerial contracts and marriage contracts ...

Ctrl Enter
Noticed oshЫbku Highlight text and press. Ctrl + Enter
We are
Refugees from Syria. Will Russia accept immigrants from the Middle East?What to do with the refugees? Eastern Europe to host thousands of Africans and Asians
Military Reviewin Yandex News
Military Reviewin Google News
23 comments
Information
Dear reader, to leave comments on the publication, you must sign in.