Klimkin and problems of Ukraine 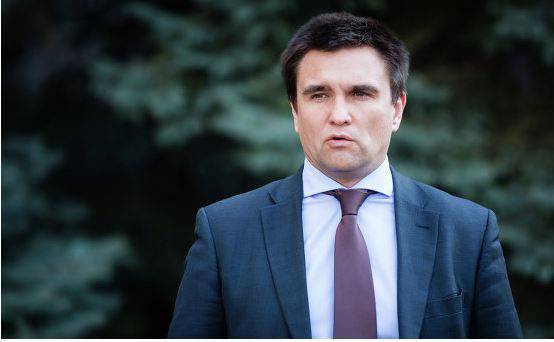 After reading this material could be speechless. Now the United States, which already put Russia on a par with the militants of the IG, apparently, according to Klimkin, is simply obliged to start bombing the Russian Federation. After seeing the interview with the unfortunate minister Klimkin, there is a double feeling, in one case, one can feel the support of the current course of Nezalezhnaya, but on the other hand, Klimkin seems to be aware of the futility of the current policy.

Some of the minister’s quotations look absurd, but acting on the recent Ukrainian principle - to draw water and spit in the well, one feels the continuity of ministers in the Square in general and the Ministry of Foreign Affairs in particular ...
Mr. Klimkin, posing as a political analyst, and almost the closest friend of the Russian president, tells the population of Ukraine the country's 404 point of view on what is happening in Syria, it would seem, take up your own country, but not:
“Attempting to make a mess in the Middle East can have incredible consequences.”

And this “mess” according to Mr. Klimkin was arranged by Russia, and not overseas “exceptional owners of everything.”

“Next year in the Russian Federation at the same time parliamentary and local elections. These elections will be considered as a specific platform, a springboard for the next elections. I believe that the situation inside the country will become more complicated for the Russian authorities. Already, most Russians are concerned about the economic situation, worry about their salaries. The real situation will be aggravated, that is, this factor will work for endurance. I always say that time works against Russia. Time, in fact, works against us in matters of destabilization, ”concludes the Minister

I would like to ask myself if Mr. Klimkin bought a house in Switzerland in case of “destabilization” in Ukraine?

Later, and according to tradition, Klimkin did not leave the topic of the Crimea, at the same time forgetting to mention the so-called “blockade of the Crimea”, i.e. in fact (when approving the Crimea-Ukraine), its own citizens block and alienate their own territory, and if you look further, they are satisfied with a certain famine (from the media outfit):
“Therefore, there will never be a compromise on Crimea regarding Russia’s membership. It will not be with us, will not be in the civilized world. If you once admit that “occupation” is “ok”, then first Crimea, then Syria, and then Russian troops will appear somewhere else. The occupation will be a fact of life "- makes an amazing statement Minister

It would seem that interesting, this is the "standard" position of the entire Ukrainian Cabinet, en-no, Klimkin illuminates the vision of the Minsk agreements:
“I am categorically against starting a conversation on the extension of Minsk, since Russia will immediately jump out of the obligations that it has taken. The last discussion at the ministerial level shows that Russia has not changed its position in the political dimension. This is absolutely the same logic that always sounds. Therefore, we must come to an end to the fulfillment of our obligations. Show that Russia does not fulfill its part, and from the security to the humanitarian. Minsk has no formal deadline in terms of fulfilling all obligations. There is a clear time limit that Russia, by the end of the year, should transfer to us control over the Ukrainian-Russian border. We were ready to go. That is, step by step, with the elections. Again, they are fooling with the Constitution and with all the issues on which we are trying to fulfill our obligations. ”

In this part of the statement of Minister Square sound completely stupid, do the viewers really not see the whole theater of the absurd?

Namely, “Russia has not changed its position in any way”, - indeed, the Russian Federation does not change its position twice a day, at the behest of Victoria Nulland or the US ambassador. And I immediately want to go into the plane of dialogue with Mr. Klimkin ...

“To show that Russia does not fulfill its part, starting from security and ending with humanitarian aid,” is very interesting here, that is, Russia - a kind of negative character - carries humanitarian aid to a suffering Donbass, but should start to bomb, right?

In conclusion, I would like to note the oddity in changing the behavior of all those who come to work in the Ukrainian Cabinet. As a graduate of the Moscow Institute of Physics and Technology and a native of Kursk, one may not see obvious things so much and make obvious absurd statements ...

However, as the text of the comments left by readers and viewers of the “24 channel” shows, not everything is so bad with the awareness of the tragedy and, in a way, comedy of absurdity happening in the theater called Ukraine:

We are in Yandex Zen
About Stalin and Khrushchev
Corporations that owe their success to the Nazis
46 comments
Information
Dear reader, to leave comments on the publication, you must to register.