The Russians are coming!

25 September 2015
75
“Russians are coming!” Is again the number one issue in the political circles of Washington, in the American and European media, in all sorts of tweeters and other network dumps, where the State Department people in need of “proofs” like to dive in. Potential candidates for American presidents are also vying with each other talking about “Russian aggression” and the need to put the Russians in their place. 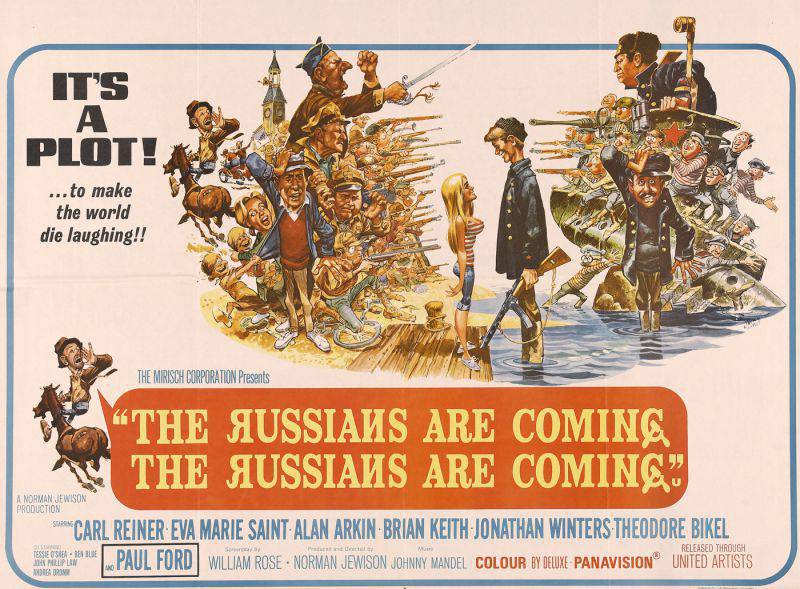 “How stupid!” - the author comments on their cries.

"Russians seem to have sent six tanks to Syria, he continues, a little medium artillery and a group of military technicians at two bases on the coast (near Latakia). But the American Republicans have already started their song about the “evil Soviets” (sorry, Russians), these “arsonists of the war” who intervened in the Syrian military conflict for the fifth year and plan to build a new base on the territory of this strategically important Middle Eastern country. ”

And who is this talking about evil Soviets? United States? After all, they placed around the world around 800 bases and military facilities, the writer reminds. And what about Russia? Only a few small bases near its borders!

The exception is Syria, where Russia has a small naval base in Tartus and a radio interception station. The Russians settled there almost half a century ago. Moscow has long been Syria’s main foreign ally and supplier. weapons for her. In Soviet times, the United States viewed almost the entire Middle East as its colony and made an exception for Syria — this country was considered a limited territory with Soviet (then Russian) influence.

But not so long ago, the White House kindled a civil war in Syria, the author points out. This was done by sending anti-government forces from Lebanon and Jordan to its territory. Over the past five years, the United States, along with Israel, France, Britain and Saudi Arabia, armed, financed and directed against B. Assad entire hordes of "rebels".

The goal of the West in Syria was to overthrow the government: the latter is too closely linked with Iran, with Hezbollah in Lebanon and with Russia. The secular government of President Bashar al-Assad in Damascus nevertheless managed to contain the onslaught of “rebels” and jihad fanatics sent to war by Saudi Arabia and Washington.

In the Middle East, the Islamic State was then formed. The author believes that in reality it is an “American ally”.

Surprisingly, Margolis writes further, but very few among the “siloviki” of Washington realize that the American machinations in Syria ultimately provoked the reaction of Russia.

A number of Republicans, potential presidential candidates (Marco Rubio, Ted Cruz and Carly Fiorina), according to the author, are downright itching, wanting to fight with Russia. Who are these people? What unites them? Eric Margolis points out that all three are protégés of America’s leading neocon, the gambling magnate Sheldon Adelson.

Interestingly, the publicist argues with irony, can these amateur strategists name more than one Syrian city? Do they even understand that Syria is as close to Russia as New York is to the city of Columbus in the state of Ohio?

Does anyone remember that in the 19th century, Russia claimed that it would protect Middle Eastern Christians? Recently, President Vladimir Putin reiterated this, stating that it is necessary to protect two million Levant Christians, who are now seriously threatened by the IS militants.

Why does the US have military bases in Djibouti, Uganda, Qatar, Afghanistan, South Korea, Bulgaria, Japan, Italy, Romania, Pakistan, Iraq, Japan and so on? And Russia can hardly afford a small base in Syria? Yes, because the empire does not allow it, the author writes. "The Empire says no."

The military budget of Russia, he continues, amounts to one tenth of the similar budget of the United States. In combination with rich allies (Europe and Japan), the US accounts for 70% of world military spending!

The only real threat that Russia poses to the United States may arise if Washington, conducting its clumsy policy in Syria, Iraq and Ukraine, provokes a direct clash with Russian armed forces.

Fortunately, the West is now dealing with "cautious, sober Vlad Putin in the Kremlin" ("The West is so fortunate to have the cautious, sober"). Putin has already prevented a war between the United States and the Russian Federation in Syria, and once again calls for direct talks between Moscow and Washington.

But does anyone really think that Putin will not do anything when the United States and its allies are tearing Syria to shreds? To think like this is “stupid and arrogant,” says the publicist. “Imperial pride half-and-half with terry ignorance,” he adds.

The United States, we add to this, constantly ignore the fact that the Syrian army is a natural force holding back the IG. But Washington declared "IG" its enemy (but not as scary as Russia).

Moscow behaves completely differently, rushing to help Assad. According to analyst Peter Akopov, whose article appeared in the newspaper "Sight" 23 of September, the goals of Russia in Syria are on the surface: "... what Vladimir Putin and Sergey Lavrov are saying is, in fact, the main goal of Russia's actions in the Middle East." Russia wants to stop the “caliphate” and believes that this can be done only by relying on the Syrian army.

The analyst recalls that in 1950-1980's. The USSR gained considerable influence in the region. And even after leaving the Middle East in the 2000-ies. Russia was where to start returning.

If before the “Arab spring” Moscow proceeded from the need to restore and establish bilateral relations with various countries of the region and did not try to regain the role of a regional player, then the situation changed later. The "reformatting" of the region, and then the confrontation with the United States over Ukraine, which began on its background, brought Russia to the realization that it needed to return to global politics. “Not as a superpower, for which there is neither strength nor special desire,” the analyst notes, “but as a great power actively promoting new rules of international relations.” These rules should change the outgoing American model of a unipolar world. In the new world “there will not be one or two superpowers, but there will be a balance of interests of several world civilizations and regional blocs”.

Today, we note in conclusion, thanks to the American failures in the Middle East policy and the threat of "IG", the Kremlin has a good chance not only to gain a foothold in the region, but to oppose the "world order" led by "hegemony" with its vision of the world. The multipolar world, the concept of which is acceptable to Russia, is replacing the aggressive Western “unipolarity” with its dubious “values”, “humanitarian interventions” and the division of terrorists into “bad” and “good”.

Observed and commented on Oleg Chuvakin
- especially for topwar.ru
Ctrl Enter
Noticed oshЫbku Highlight text and press. Ctrl + Enter
We are
Results of the week. "It is a sin to laugh at sick people"Results of the week. “When a lot of people look stupid, it starts to look normal.”
Military Reviewin Yandex News
Military Reviewin Google News
75 comments
Information
Dear reader, to leave comments on the publication, you must to register.