Values ​​of the "victors"

25 September 2015
17
The difficulties of “Western values”, as some experts believe, are not at all in their content. The real problem was the “triumph” with which these values ​​were given after the “victory” of the West in the Cold War. The fact is that triumphant sentiments are still alive. Representatives of the West persistently idealize their own vision of the world, believing that the entire planet dreams of getting closer to it. European and American "victors" are paving the way for the "dream" not even with good intentions, but with clandestine operations and bloody wars. 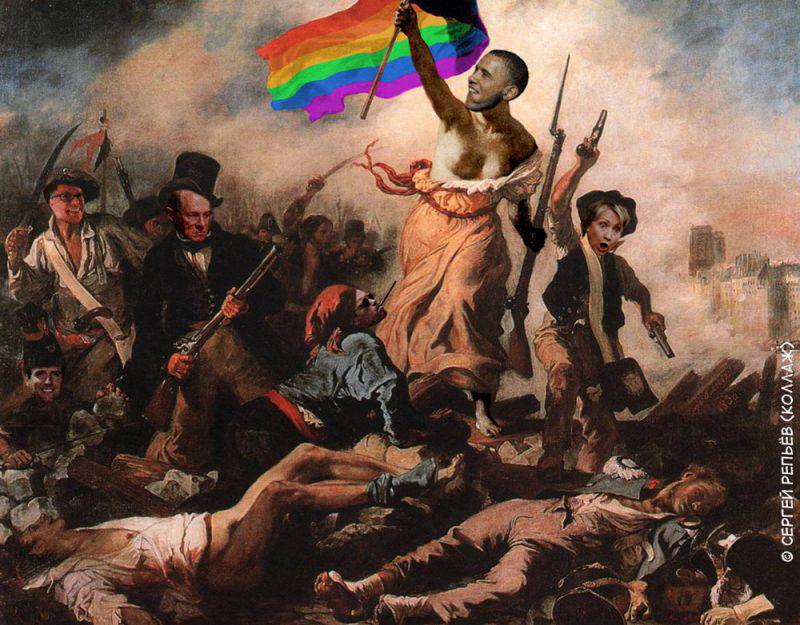 This was told on the portal journalitico.com D. Ryan. His material is a response to article by Stephen Erlanger, a famous American journalist in international affairs, now heading the London bureau of The New York Times. To the theses of Mr. Erlanger the columnist added his “two cents”. In our opinion, these "cents" outweigh the article of Erlanger himself.

So, here is the analyst's answer to the famous international journalist.

D. Ryan believes that the main difficulty with “Western values” is not at all in the content of these notorious values ​​(although the doubtful content is subject to fair criticism).

The real problem, writes Ryan, is that after the "victory" in the Cold War, the West has taken over the triumphant mood. Such a "triumph" is dangerous, but the mood of the "winners" is still alive today.

We are convinced, the author writes, that everyone around still dreams of the same thing as we do. Therefore, we supposedly have the right to use any method, from the open and the most bloody to the secret and gentle, to sow our values ​​everywhere. The argument for the realization of this “right” is very simple: the end justifies the means.

Promoting its “righteous mission”, the Western community “closes its eyes to the side effects”. Such a “twisted mindset” tears apart the hearts of liberals: on the one hand, politicians are calling for a humane resolution of crises, on the other - they are ordering NATO to start bombing NATO.

This contradiction lies in the wrong idea. It consists in the fact that supposedly you can rid the world of the "bad" guys and fill it with "good". The West does not think that such a task is really impossible (or doable, but with the opposite result).

Why does the West make such monotonous mistakes? Because he is sure: Western values ​​are always "correct." Historian Paul Robinson is not easy to write that the failures of Western politics are rooted in the idea of ​​absolutizing the criteria of Western politics: they say that this policy can never be erroneous. Other approaches are not considered due to “too much cognitive dissonance.” And so everything goes on without end.

A Westerner, if you ask him something about geopolitics, will probably tell you that Western values ​​are in demand everywhere. And if so, trying to spread them is a noble goal.

Not so long ago, at the beginning of the Arab spring, the author recalls, the Western world triumphed, believing that the time had finally come when the Middle East and North Africa embraced ideas of democracy and corresponding values. Later, Ryan had a dispute on Twitter with the New York Times correspondent R. Cohen, who said that refugees from the countries of the Middle East and North Africa had come to Europe for European values. The journalist assured his opponent that it was for this reason that they arrived in the EU, and did not go anywhere in Russia. Ryan replied that if Russia were on the other side of the Mediterranean, like Italy and Greece, they would have floated there. According to Ryan, Western values ​​mean very little to most migrants. Otherwise, where are such problems with integration and assimilation between the indigenous population and immigrants? Problems everywhere - in the UK, France, Sweden ...

It is clear that most of the refugees would not have tried to get into Europe if their homes and cities had not been destroyed. By the way, they collapsed as a result of the “humanitarian interventions” of NATO, as a result of which wars and various local conflicts broke out.

As for Russia, this country with its special “mixture of authoritarianism and democracy” is interested in its “near abroad”. In neighboring countries, people speak Russian and share the culture of Russia. And they even feel themselves Russian. And this state of affairs does not necessarily mean that Putin is about to decide on some kind of "historical mission ”and march to the Baltic states and recreate the Soviet Union. B. Kh. Obama may think so, but in reality it simply means that Moscow considers neighboring countries to be “within its sphere of influence”. As a result, the Kremlin’s reaction “to events in these places” is understandable.

Washington, the author believes, is “absolutely convinced” that only he “has the right to a sphere of influence”. Moreover, this "sphere" can extend "to any territory and at any time."

Moscow simply does not have the ability to behave similarly to "even in its own backyard."

If you look wider, it will become clear: Russia, like China, has no interests in imposing its management model or cultural values ​​on the rest of the world. This is also indicated in the Kremlin, pointing to the importance of multipolarity and international systems based on mutual respect, and not dictatorship and violation of one’s sovereignty by “the self-appointed world leader”.

Western leaders and politicians cannot recognize that there can be a country where a different development model will work. And the statements of Western demagogues, with their incessant superiority, are "permeated with hypocrisy, which is becoming harder to accept."

Democracy, according to the analyst, “evaporates and appears” precisely in those cases when Western politicians, respectively, put their nose into their own business, or, on the contrary, do not climb. Double standards allow the West to make false judgments like these: if in one country or another the election was won by “our guy,” then democracy is a victory; if “not our boy” won, you should immediately throw him off the chair for the sake of “freedom and democracy”. The state borders in Syria have no meaning for the White House; However, the same boundaries in the case of the Crimea in the White House are “in vogue”. Western interests are necessarily declared lawful, transparent and truly moral; Russia's interests are always considered illegal, dark and morally low. This line adheres to the West, says Ryan.

This line of constant world dictatorship of "values", we add from ourselves, leads the planet no longer to the Cold War, but to the third world war.

It is known that the USA is preparing to place new nuclear bombs B61-12 in Germany (at the military airbase in Büchel, Rhineland-Palatinate, awaiting the arrival of two dozen such bombs). The Kremlin has already responded to such news: stated that, if necessary, countermeasures will be taken - the deployment of Iskander-M complexes in the Kaliningrad region.

The destruction of all life on Earth would probably be the latest achievement of Western "democracy" with its "values" and the desire for "triumph."

Observed and commented on Oleg Chuvakin
- especially for topwar.ru
Ctrl Enter
Noticed oshЫbku Highlight text and press. Ctrl + Enter
We are
We are propagandists: The truth is about how The New York Times and the White House distort information about Ukraine ("Salon", USA)The New York Times One-Way Narrative on Ukraine (Consortiumnews.com, USA)
Military Reviewin Yandex News
Military Reviewin Google News
17 comments
Information
Dear reader, to leave comments on the publication, you must sign in.