October 6 2015
27
Tactical aviation X-59 air-to-surface guided missiles were originally intended to destroy enemy ground targets. Such weapon could be used to attack staffs, warehouses, infrastructure and other stationary targets. At the same time, the target was hit with a circular probable deviation at the level of 2-3 m and at ranges (depending on the type of rocket) to 110-120 km. At the beginning of the two thousand years, the X-59 family of missiles was replenished with new weapons. Continuing the development of the old project, Raduga GosMKB, now part of the Tactical Missile Armament Corporation (KTRV), developed the Ovod-MK X-59MK anti-ship missile.


The existence of a new project became known in 2001 year. During the MAKS exhibition, the development organization for the first time showed a model of a promising anti-ship missile and announced some information about these weapons. In the new project it was planned to use the existing developments and technical solutions, as well as a number of new equipment. All this allowed to improve the characteristics of the existing rocket, as well as to occupy a new tactical niche. New modification of existing weapons was proposed for the destruction of surface targets of various types.

The Ovod-MK project was developed on the basis of the existing X-59MK rocket. The new rocket retained the overall architecture and layout, as well as the aerodynamic appearance. In this case, it was decided to seriously revise the composition of the onboard equipment, as well as to abandon the two-step scheme mastered and tested by time. The last revision made it possible to increase the fuel stock, which had a positive effect on the maximum flight range. 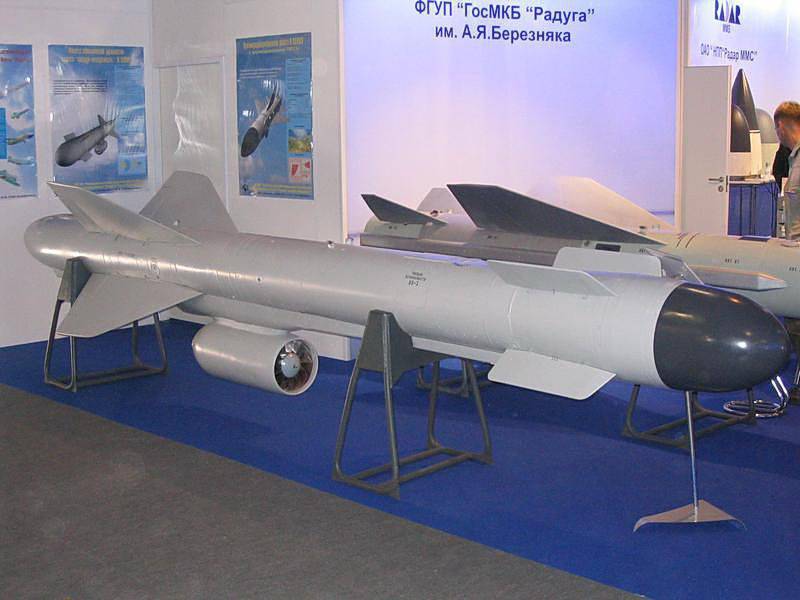 In general, the design of the X-59MK and X-59M missiles is similar. However, a newer product has some differences due to the need to enhance various characteristics. Anti-ship missile with the index "MK" received a cylindrical body with a streamlined head. In connection with the change in the composition of the control systems, the hull received the head part in the form of a truncated cone widening in front and a radio transparent head fairing. A gargrot is preserved on the bottom surface of the case. As before, it was proposed to install a set of destabilizers and X-shaped wings on the side of the case. A pylon with a cylindrical engine cover was provided under the gargrot.

In order to increase the flight range, it was decided to equip the rocket with an additional fuel tank. He was placed in a cylindrical tail compartment with a fairing. The compartment of the additional tank was proposed to be mounted in the tail of the hull, where previous missiles had a drop-off starting solid-fuel engine. Nasal destabilizers, which improve missile controllability, were also seriously reworked. The first X-59MK samples demonstrated at the beginning of the last decade were attended by folding two-section destabilizers similar to those used on earlier rockets of the family. In the future, such a design was abandoned, using unfolded trapezoid planes with an arrow-shaped leading edge.

The design of the X-shaped wings remained the same. They had a large sweep and a set of steering wheels on the rear edge. Thus, despite the refinement of destabilizers, the overall aerodynamic shape of the rocket as a whole remained unchanged.

The total length of the X-59MK rocket is 5,7 m, the case diameter is 420 mm in the head part and 380 mm in the central part. Wingspan - 1,3 m. The launch weight of the Gadfly-MK remained at the level of the previous product of the family - no more than 930 kg.

According to reports, the layout of the internal volume of the body of the new rocket was fully borrowed from the previous product family. The head of the hull was still homing head and part of the control equipment. Behind her, a warhead was positioned, behind which a central fuel tank was placed. In the tail of the case a place was provided for an additional hardware compartment with steering wheels and tail fuel tank.

The main innovation of the X-59MK project was the use of the active radar homing head ARGS-59E, created by NPP Radar-Mms (St. Petersburg). This product allowed to radically change the method of combat use and to ensure the possibility of performing new combat missions. In addition, the new GOS is able to search for a target and aim at it without the help of an aircraft carrier. Thus, in the new rocket, for the first time in the family, the principle of "launched-forgotten" is implemented.

The homing head ARGS-59E is designed for independent detection of large surface radar-contrast targets. A search for objects with an EPR of at least 300 sq.m — large boats and ships of various types is provided. A target search is also provided at any time of the day and in all weather conditions, including at sea conditions up to 6 points. Declared the ability to search and attack targets both in the open sea and near the coast.

The maximum range of a missile launch depends on the size of the target and its visibility for the radar GPS. So, for relatively small boats, this parameter is 145 km. Large ships can be attacked from a distance of up to 285 km. In this case, the probability of hitting a “boat” target with one missile is 0,7-0,93. Larger targets are hit with probability up to 0,9-0,96. Thus, no more than a few missiles are required to destroy a destroyer or cruiser. 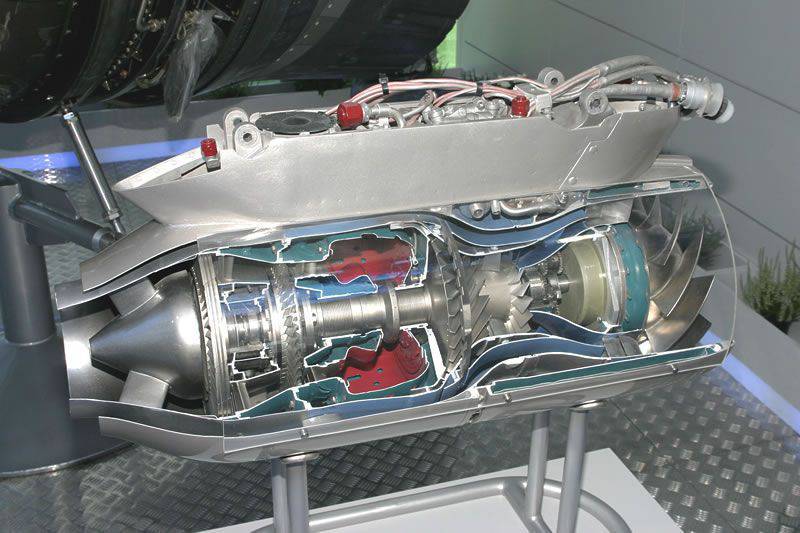 The X-59MK missile control system has a standard flight program at minimum altitude, which increases the likelihood of an effective breakthrough to the target through the zone of naval air defense. On the cruise flight, the rocket moves at an altitude of 10-15 m, near the target it drops to 4-7 m.

The Ovod-MK missile carries a penetrating warhead weighing 320 kg. Such a product allows you to cause serious damage to targets of all types due to the undermining of the charge inside the attacked ship. The power of the warhead is one of the main factors affecting the combat effectiveness of the rocket.

Keeping the layout of the previous rocket of the family, the product X-59MK gets the main engine, which is made on the pylon under the gargrotto of the hull. As before, the product uses a twin-turbojet engine placed on a pylon under the hull. In the new project it was proposed to use the engine type TRDD-50AT (36МТ), created by the Omsk engine-building design bureau and produced by NPO Saturn. The engine with a takeoff 450 kgf has a length of 850 mm and a maximum diameter of 330 mm. Net weight of the device - 82 kg. To control the operation of the power plant, an electronic-hydraulic control system was included in the onboard equipment of the rocket. Also in the engine there is a built-in electric generator to supply energy to the onboard units of the rocket.

The used engine allows the rocket to reach speeds from 900 to 1050 km / h. At the same time, it is possible to maneuver in height from 200 m to 11 km. However, after dropping from the carrier, the rocket goes into a dive and sinks to the height of a cruise of the order of 10-15 m. 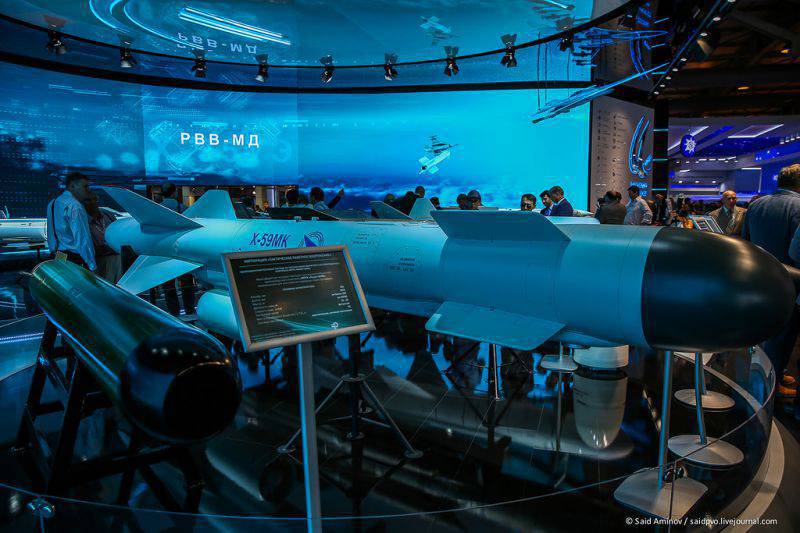 The layout of the X-59MK rocket as part of the KTRV exposition at the MAKS-2015 cabin. Photo by Saidpvo.livejournal.com

The carriers of anti-ship missiles X-59MK can be domestic aircraft of various types, capable of carrying aircraft ejection devices AKU-58-1 and use missiles with active radar homing aircraft. During the first shows of the new missile, it was claimed that its carriers could be various planes of the Su-27 family. To date, the product “Ovod-MK” is included in the nomenclature of weapons of the Su-30 multi-role fighter.

During the past decade, the X-59MK anti-ship missile passed all the necessary tests and went into mass production. The first customer of such weapons was the Russian air force.

In the middle of the two thousandth, GosMKB Raduga was once again engaged in updating the X-59 family of guided missiles. This time, the newest X-59MK was taken as the basis for the new development. At its base, the X-59MK2 product was created with a new guidance system using satellite navigation and a television homing head. In addition, to date, and X-59MK2 managed to become the basis for a completely new guided missile. All new missiles of the “Gadfly” family are regularly displayed at various exhibitions of weapons and military equipment.