How police snipers are trained 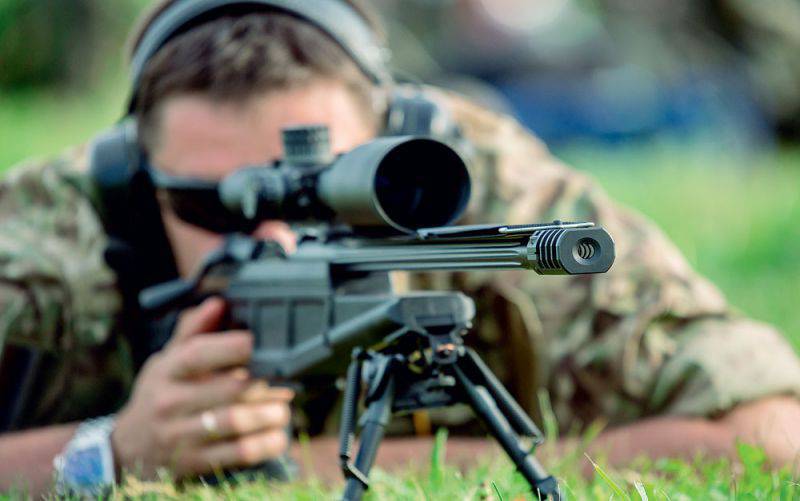 On June 13, at the tactical training ground of the Separate Special Forces Division of the Internal Troops of the Ministry of Internal Affairs of Russia, police and sports sniping competitions “Absolute Accuracy” were held dedicated to the Day of Russia. The organizers of the competition made armory ORSIS company under the auspices of the Military Industrial Commission under the Government of the Russian Federation, with the assistance and assistance of the command of the Ministry of Internal Affairs of the Russian Federation.

High-precision shooting professionals divide sniping into sports and so-called practical. With sports, everything is simple: it's target shooting in order to achieve the best result and get prizes, awards and titles. Practical sniping is only for military personnel and security personnel, because its purpose is to destroy enemy personnel and material objects such as vehicles, lightly armored vehicles, and shelters. In practical high-precision shooting there is a division into a policeman and military sniping.

Police sniping - work in urban areas, at distances of location of objects in the city (average 50 − 300 m). For a police sniper, firing accuracy is of utmost importance - for example, when you have to shoot a criminal who is hiding behind a hostage. In such a situation, even a centimeter miss can be an irreparable mistake. In addition, a police specialist should strive to incapacitate a criminal with the first shot, which means that he needs to hit strictly defined vital organs. At the same time, he has no opportunity to shoot weapons, to make test shots - he has to act immediately and for sure.
Military sniping is very different from the policeman. First of all, we are talking about other distances: usually you have to shoot at distances from 500 to 1500 m in a mountainous wooded area. A military sniper, as a rule, is not faced with the task of killing the enemy — the injury will bring more damage to the enemy. A wounded comrade needs to be evacuated from the battlefield, and for this, other servicemen will be chosen, and the sniper is only on hand. Therefore, there is no need to shoot at vital organs - it’s enough to hit “by silhouette”. 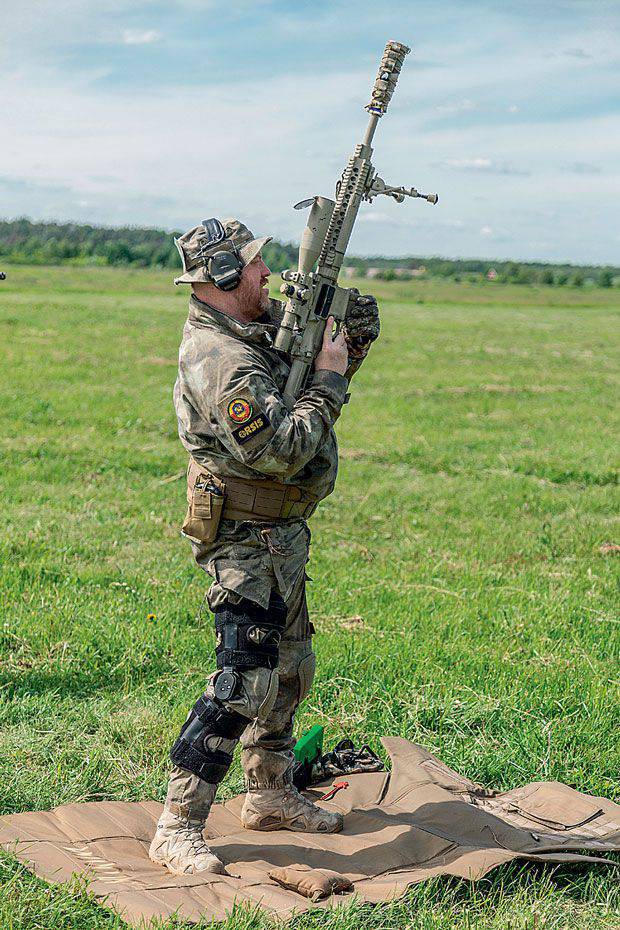 A military sniper has the ability to "shoot down" a weapon on the spot; it can take several shots at a target, which is often not able to hide somewhere in the field. A sniper can adjust his fire on the spot. This is facilitated by the fact that he is very far from the enemy on the battlefield, and the enemy does not see where the shot was made from. And in some cases, he does not even hear: after all, the speed of a bullet is two to three times the speed of sound propagation, and the clap can “come” after it hits. 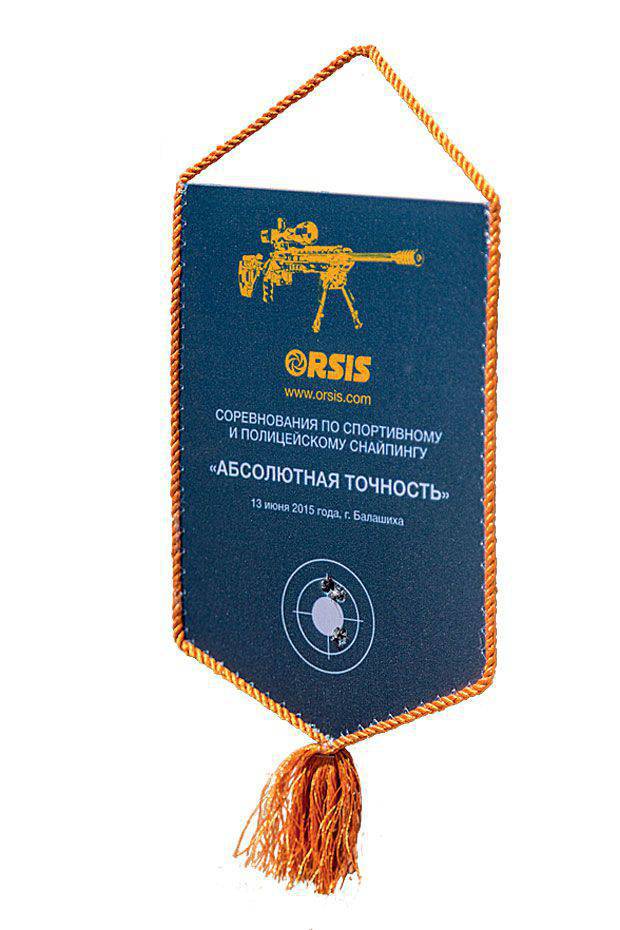 The result of the “Pennant” exercise - in this case mediocre
A military shooter usually knows where and at what time his victim will appear, and therefore can prepare for a meeting. He has the ability to equip his shelter, use natural camouflage, terrain features and vegetation on the ground. Police sniper is often limited in the choice of means of disguise. For stealth, he uses the difference in light: the sniper never puts the barrel out of the window and tries to work from the bottom of the room to stay in the shade. At the competitions, shooters were asked to perform 12 exercises, the nature of which allows us to say with confidence: the fighters competed in police sniping.

Any shooter with a rifle in caliber up to 9 mm, which would show accuracy to 1 MOA (angular minutes), could take part in the competition. All participants could be divided into two categories - civilian rifles and law enforcement officers. These two groups overlapped with each other only in two exercises.

The level of participants was different, as well as equipment. One glance at the huge backpacks with which the fighters came to the tournament was enough to understand how important equipment plays in sniping. First of all, we are talking about a complex of a rifle, an optical sight and ammunition. The rifle itself may consist of several parts, and from different manufacturers.

Along with foreign bison arms market, such as Accuracy International, Remington, Sako, Steyr Mannlicher, Orsis rifles were encountered in the hands of the fighters. Several years ago, the weapons of the Russian company set a new quality standard in both the domestic and global markets. This is eloquently shown by the fact that in international competitions among special forces units, Russian snipers took first place with the Orsis rifles.

In addition to the weapon itself, the bipod and tripods, a range finder, an anemometer for measuring wind speed, a ballistic calculator are needed. Even such simple items of equipment as a pruning mat or a tripod for a telescope can affect the result: after all, the quality of shooting depends on elementary convenience.

The weather conditions on the day the participants got difficult. The wind changed very often, the oppressive heat hung over the test site and its treacherous satellite, a mirage. At long distances, the hot air “thickened” so much that the arrows almost did not see anything behind the translucent film in their sights. In addition, the trunks themselves are heated when they are fired and give a mirage right in front of the sight lens.

Another joke of nature that everyone faced, even photographers, is tall grass. Since most of the shots were performed from a prone position, the vegetation covered the line of aiming and the shooters had to clear their own “tracks” for themselves. 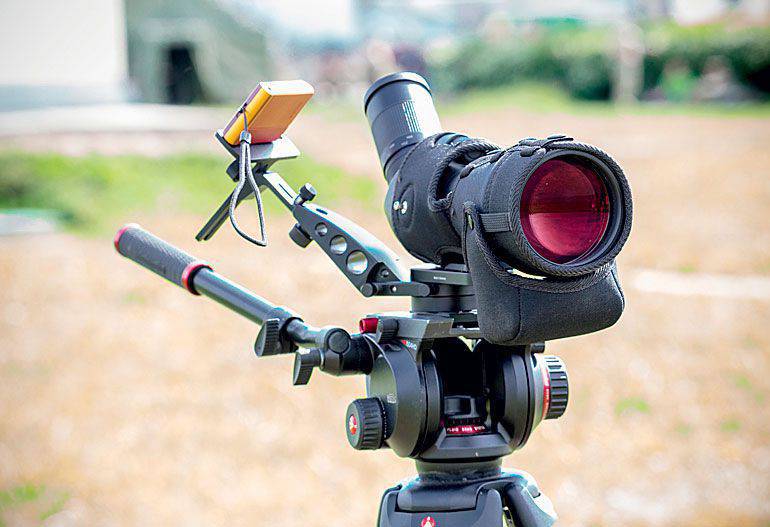 Equipment - the face of a sniper! Moreover, the real faces of many of them are strictly forbidden to shoot, but they are happy to demonstrate their shooting "gadgets" and allow them to photograph

Twelve exercises for police snipers are united by one common feature: in each of them (except perhaps for “Surprise”) truly surgical precision is required.

At a distance of 300, the shooter must complete just one shot. The difficulty is that you need to shoot from a heated rifle without prior adjustment. The shooter still does not know how the wind behaves in practice. This is the very first exercise, and it is one of the most characteristic of the work of a police sniper, who always has only one chance.

At a distance of 100, the arrows fire at A4 format sheets with randomly spaced black squares and triangles. The shooter is limited in time 30 seconds and the number of rounds - five pieces. The difficulty is that the shooter must first identify the figures according to the form, and then determine which ones he is going to fire: the square is larger in area, but less points are given for it, with a triangle - the opposite is true.

At a minimum distance of only 40 meters, the shooter must hit two toothpicks attached to a piece of paper with a stapler. The difficulty is that the goals are really small and there is an additional condition - if the shooter interrupts the brackets with which the toothpicks are attached, he gets penalty points. This exercise is the simplest imitation of a hostage situation.

The standard range for police work is 100. The shooter is limited by time and the number of rounds - three pieces. Target - three circles with zones, divided into different number of points. As the name implies, you need to score a point in the total 21. If the shooter goes over or undercards, he gets zero. The difficulty is obvious: you need not just to hit, but to get into certain numbers, taking into account previous hits. And you need to get into all three targets: after all, even after hitting two times in tens in both circles, you will not be able to dial 21.

The 200 distance is m. The goal is a paper target on an A4 sheet with a black oval and a round area inside the 6 size. See It is easier to get into a large oval, but less points are given for it, the circle is very small, but more will be given for it. 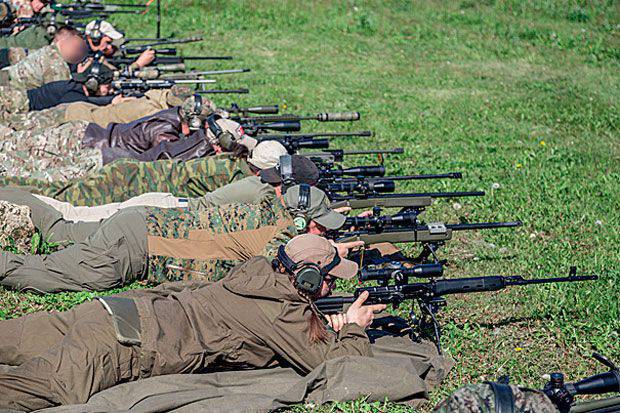 200 range m. Targets - a black circle with a diameter of 6 cm and a square 3 cm. As always, a larger goal is simpler, but “cheaper”. The difficulty is that shooting, unlike other exercises, is necessary from a sitting position, and sitting on the very “fifth point”, without any bipod or tripods. Each shooter himself determines the specific position, although it must be said that the position is in any case very uncomfortable and not very stable.

200 range. Shooting is conducted from a standing position, with the rifle rest on a tripod. The difficulty lies in the position for firing. 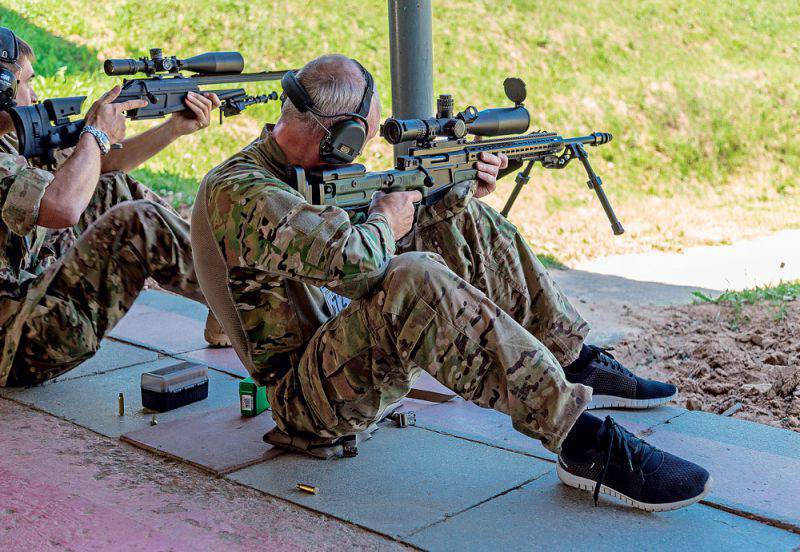 200 range m. Exercise to change positions when shooting. The arrows alternately lie down, with the knee and standing. From each position you can make three shots in three minutes. The difficulty is that in each of the provisions you need to work without a stop and without a tripod, even in the prone position. Therefore, the shooter needs not just to make a shot, but first to find the optimal body position for shooting.

One of the most difficult and at the same time interesting exercises. Shooting is conducted at a distance of 300 m. In total, the hand is allocated one minute and not more than ten rounds. Target - two semicircles, covered with a black rectangle. As usual, the big semicircle is easier to hit, but less points are paid for it. Hitting a black rectangle results in penalty points. An additional condition - the cartridges are separate from the rifle. The shooter takes one cartridge, runs or fits (depending on tactics) to the rifle, takes a prone position, makes a shot, walks or runs after a new cartridge, and everything repeats again. Heart palpitations, heavy breathing, the need to re-stabilize the position each time - all this complicates shooting and at the same time brings the exercise closer to the actual police situation.

The range of 300 m. Goals - three circles with two test zones in each. Only one hole is counted in each. The exercise is given three rounds. As usual - everyone chooses which target to hit, more complex and expensive, or easier, but less valuable.

Actually no surprises. The most "far" exercise. Distance 500 m. Purpose - ceramic tiles 20 x 30, see. Scoring is not: the tile is scattered from any shot, which means either a test or not.

Ctrl Enter
Noticed oshЫbku Highlight text and press. Ctrl + Enter
We are
A new sniper rifle, created in the framework of the ROC "Precision", is ready for serial production.Rifle for professional sniper
Military Reviewin Yandex News
Military Reviewin Google News
17 comments
Information
Dear reader, to leave comments on the publication, you must sign in.