Russian Jeanne d'Arc, or about the feat of the nurse Rimma Ivanova 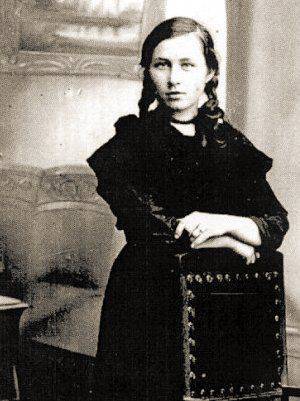 9 September 1915 of the year near the village of Mokray Dubrava German soldiers saw a young girl with a red cross on her dress raising Russian fighters to attack. With a cry: “Brothers, follow me!” - Regimental nurse Rimma Ivanova rushed at the enemy. The attack was successfully completed. German positions were taken, but the heroine herself died, having been fatally wounded in the thigh. Her last words were: "God save Russia."


The act of the girl was not approved by the chairman of the German Red Cross, General Pfuhl, who considered that the sister of mercy should not take in hand weapon or raise the fighters to the attack, but the Geneva headquarters of the International Committee of the Red Cross decided that the feat of Rimma Ivanova does not violate any provisions of this organization. It was the right decision. Going to the attack, Rimma Ivanova remained a sister of mercy and saved the lives of soldiers, whom the enemy could simply destroy.

Generally, during World War I, amazing things sometimes happened. The Germans could let the captured Russian officers freely walk on parole, the Russian soldiers could survive the gas attack without means of defense, and then defeat the enemy in battle. The heroic deed of Rimma Mikhailovna is on a par with these and many other outstanding acts of the time.

For this feat, soldiers and officers of the 105 of the Orenburg regiment were asked to award the nurse with the Order of St. George of the IV degree. According to the statute, only officers could receive this order, and Rimma Ivanova was a girl from a simple family who served as a sister of mercy and had no military rank. Soldiers and officers waited for the decision of Emperor Nicholas II and told the recruits. history her life.

Rimma Mikhailovna Ivanova was born on June 15 of the year 1894 in Stavropol. In 1913, she graduated from Olginskaya gymnasium and began working as a national teacher in one of the rural schools of the country. When the First World War began, Rimma Ivanova returned to Stavropol. She learned to be a nurse and on January 17 1915, the volunteer went to the front. Her parents were worried about the fate of her daughter, and Rimma sent a letter telling that she was doing well:

“Lord, how I would like you to calm down. Yes, it would be time. You have to rejoice, if you love me, that I managed to get a job and work where I wanted ... But it’s not for fun that I did it, and not for my own pleasure, but to help. May I be a true sister of mercy. Let me do what is good and what to do. Think as you like, but I give you my honest word that I would give a lot in order to alleviate the suffering of those who shed blood. But you do not worry: our dressing station is not exposed to fire ... My good, do not worry for the sake of God. If you love me, then try to do as I feel better ... That will be true love for me. Life is generally short, and it is necessary to live it as completely and better as possible. Help, Lord! Pray for Russia and humanity. ”

Note that Rimma hit the front almost as much as the heroine of the film “Hussar Ballad”. The girl cut her hair short and called herself Ivan Ivanov. Soon the simple deception was revealed, and she continued to serve under her own name. For courage in rescuing the wounded, she was awarded the St. George Cross of 4 degree (the insignia of the Military Order of St. George for the lower ranks) and two St. George medals.

In August 1915, the sister of mercy was given a short vacation, and she went to visit her seriously ill father. He asked her to be transferred to the 105-th Orenburg regiment, where his elder brother Viktor Ivanov worked as a regimental doctor. Rimma agreed.

She had less than a month to live.

In early September, she wrote several letters from the front to her parents: “My good, lovely mother and folder! It is good for me here. People here are very good. Everyone treats me affably ... God bless you. And for the sake of our happiness, do not be disheartened. ”

In a few days "Russian Jeanne d'Arc" will die heroically.

22 September 1915, the head of the Stavropol province receives a telegram from the front, which says that Nicholas II 17 September 1915, “deigned to honor the memory of the deceased sister of mercy Rimma Mikhailovna Order of St. George 4 degree. Ivanova’s sister, despite the regrets of the regimental doctor, officers and soldiers, always tied up the wounded on the front line under terrible fire, and on September 9, when both officers of the 10 Company of the 105 Orenburg Regiment were killed, they gathered the soldier and rushed forward together with them, took the enemy trenches ".

The heroine’s brother was allowed to take the girl’s body to Stavropol. The whole city came out to meet the remains of Rimma Ivanova, and during the funeral the priest of the church in honor of the Apostle Andrew the First-Called, Archpriest Semyon Nikolsky said: “France had an Orleans maiden, Joan of Arc. Russia has a Stavropol maiden - Rimma Ivanov ".

Many knew about the feat of the girl before the revolution. In her honor was awarded a scholarship for students in the Stavropol medical assistant school, Olginsky gymnasium of the city of Stavropol and the Zemsky school of the village of Petrovsky. Rimma's name fell on a monument to the heroes of the Great War, opened in Vyazma in 1916. However, in Soviet times, the monument was demolished, as was the tombstone on the territory of St. Andrew’s Church. Before 1917, the girl wanted to erect a monument in Stavropol. There were even proposals for the canonization of Rimma Ivanova, but then the history of Russia took a different path. In Soviet times, they did not like to remember the First World War, and many pages of our country's glorious past were forgotten for many years. Fortunately, the situation is changing now. Rimma Ivanova’s name is a street in the 204 quarter of Stavropol. In memory of her feat, a memorial plaque was installed on the building of the former Olginsky gymnasium.

Ctrl Enter
Noticed oshЫbku Highlight text and press. Ctrl + Enter
We are
Joan of Arc, as a PR-project of her eraRussian Jeanne d'Arc Maria Bochkareva and her female “death battalion”
Military Reviewin Yandex News
Military Reviewin Google News
6 comments
Information
Dear reader, to leave comments on the publication, you must to register.