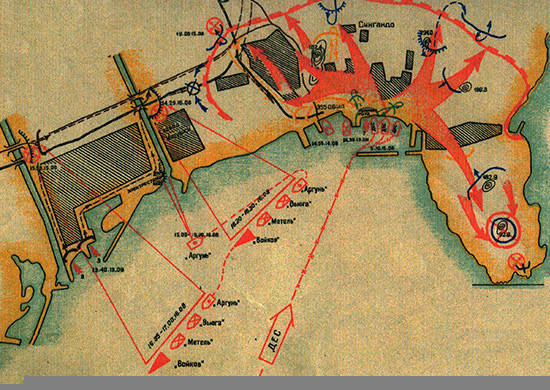 Seisin Airborne Operation 1945 - Operation of the Pacific Forces fleetcarried out on August 13–16, 1945 during the Soviet-Japanese War of 1945 with the aim of capturing Seishin (Chongjin), the enemy’s naval base on the coast of North Korea, through which the Kwantung Army’s sea communications with Japan were carried out.

The base was a fortified area, covered from the sea by coastal defense artillery. The Japanese had in the city an infantry battalion, officer school, personnel of the naval base, only about 4 thousand people. However, during the operation, the number of Japanese troops increased many times due to the retreating units of the Kwantung Army — first the 2 infantry regiment, then the Guards Infantry Division. Japanese troops in battles led the commander of the Ranan fortified area, Lieutenant-General Sokiti Nishivaki.

The Soviet command decided to conduct reconnaissance in battle first, landing a reconnaissance squad on the quays of the Seisinsky port with the task of gaining a foothold in the port. Following him, it was supposed to land the main landing forces, which were to seize Seishin and hold him until the approach of the 25th Army, advancing along the coast of North Korea. The main forces were the 355th separate marines battalion (1st echelon), the 13th separate marines brigade (2nd echelon) and the 355th rifle division (3rd echelon), as well as reconnaissance and gain. The following were distinguished for the operation: 1 destroyer, 1 mine-layer, 8 patrol ships, 7 minesweepers, 2 small hunter boats, 18 torpedo boats, 12 landing ships, 7 transports. Aviation 261 aircraft were supposed to provide support, of which 188 were bombers and 73 fighters. 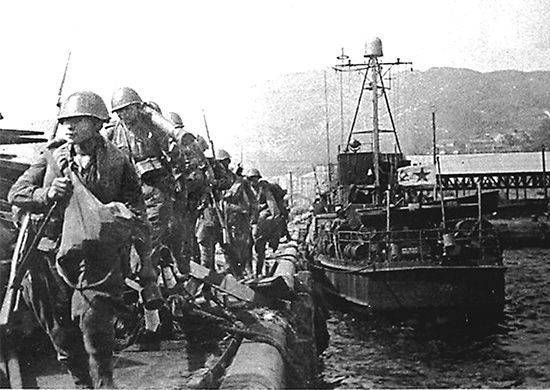 The 11 and 12 August naval landings of the Pacific Fleet captured the North Korean ports of Yuki (Ungi) and Rasin (Nanzhin), which improved the conditions for the Seysin landing operation. On August 13, the 140 th division of the Pacific Fleet headquarters under the command of Lieutenant V.N. landed on Saysin moorings from torpedo boats. Leonov, and behind him the forward detachment of the landing force as part of a company of machine gunners. from the 13 Brigade of the Marine Corps (181 in total). Opponent did not provide serious resistance during the landing. However, with the advancement of the vanguard into the city on its streets fierce fighting developed. On August 14, the 1 was landed on Seysin, and on August 15 the 2 echelon of the landing force was landed. Fights were conducted in a difficult situation. The number of Japanese troops in the city increased continuously due to the approach of units retreating along the coast, while the forces of the landing force were increasing slowly. Nevertheless, the 15 paratroopers of August occupied most of the city, and the next day, together with the upcoming units of the 393 th rifle division of the 25 army, seized the Seisin naval base and went to the communications of the Japanese 3 th army, cutting off the 17 Japanese troops front from 1-th front and from the coast of the Sea of ​​Japan.

The successful completion of the Seysin landing operation was facilitated by the effective support of the landing with ship fire from the sea, and from noon on August 15, with improved weather, and air strikes against the enemy. Fleet aviation made during the battles for the city to 400 aircraft sorties. In the afternoon of August 16, the port and the city were completely freed from the enemy (until the arrival of the 3 echelon). The number of Japanese. troops in the city continuously increased due to the approach of units retreating along the coast.

The Seisin landing operation was the first large landing operation of the Pacific Fleet. The capture of Seysin allowed the troops of the 25 Army of the 1 of the Far Eastern Front (approached Seisin by the end of 16 August) to maintain a high attack rate on the Korean coastal direction and significantly hampered the evacuation of Japanese troops and material assets from North Korea to Japan.

Several hundred fighters and commanders who participated in the operation were awarded state awards. The commander of the 140 th reconnaissance V.N. Leonov became the twice Hero of the Soviet Union. The titles of Heroes of the Soviet Union were awarded to 16 people, among them: the marines - the brigade commander, Major General V.P. Trushin, the commander of the battalion, major MP Barabolko, commander of a company of machine gunners of the Marine Corps, senior lieutenant I. M. Yarotsky, medical instructor, senior sailor M.N. Tsukanova (posthumously); the sailors - the commander of the landing and the commander of the brigade of patrol ships, captain 3 of rank MG Bespalov, flagship artilleryman of the patrol ships division, captain 3, rank G.V. Ternovsky, commander of the patrol ship, captain-lieutenant L.N. Balyakin, officer of SMERSH, Vladivostok Marine Defense Region, Lieutenant M.P. Krygin (posthumously), commander of the 34 th bomber aviation regiment, Major N.I. Druzdev A number of military units (13-I brigade of marines, 355-th and 365-th separate battalions of marines, 34-th bomber aviation regiment of the fleet, 140-th reconnaissance detachment) were transformed into a guards. The 10 Air Division of the dive bomber of the Pacific Fleet received the honorary title Seysinskaya. 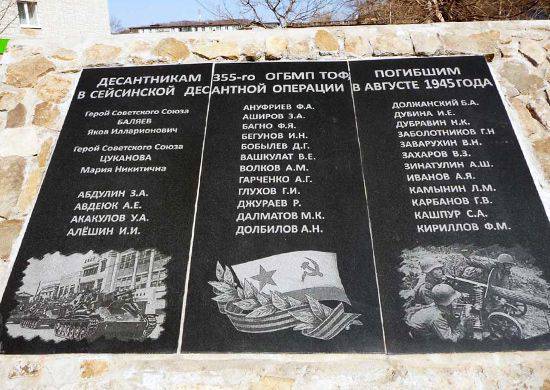