26 September 2015
3
In conversations about the architecture of the times of Ivan III, we rarely recall the Russian North-West - Novgorod and Pskov lands. Both of them came to the 15th century with their established and original architectural schools. However, Novgorod, which lost its independence in 1478, experienced an explicable cultural depression and dropped out of the list of “trendsetters of architectural fashion” for a long time. And in Pskov, which was more loyal to Moscow and de jure retained independence, continued to develop its own line (the Church of St. George from the Importation 1494 of the Year, the Epiphany from the Zapskovya to the 1496 of the Year, and others) unrelated to the Moscow tendencies.


At home, the Pskov architects turned out to be more conservative than in the service of Ivan III. Extrapolation of Moscow architecture in Pskov and Novgorod began later. And at the end of the 15th century, the North Zavolzhsky-Vologda Territory and Belozerye became a plowed field for stone construction, where until then all the buildings were exclusively wooden. By the end of the century, the development of the North has become the most important task - political, economic, social, and spiritual. Thus, under Ivan III, the first three stone temples of the Vologda region were built - the Transfiguration Cathedral of the Savior Stone Monastery (1481, not preserved), the Nativity Cathedral of the Ferapontov Monastery (1490) and the Assumption Cathedral of the Kirillo-Belozersky Monastery (1496). 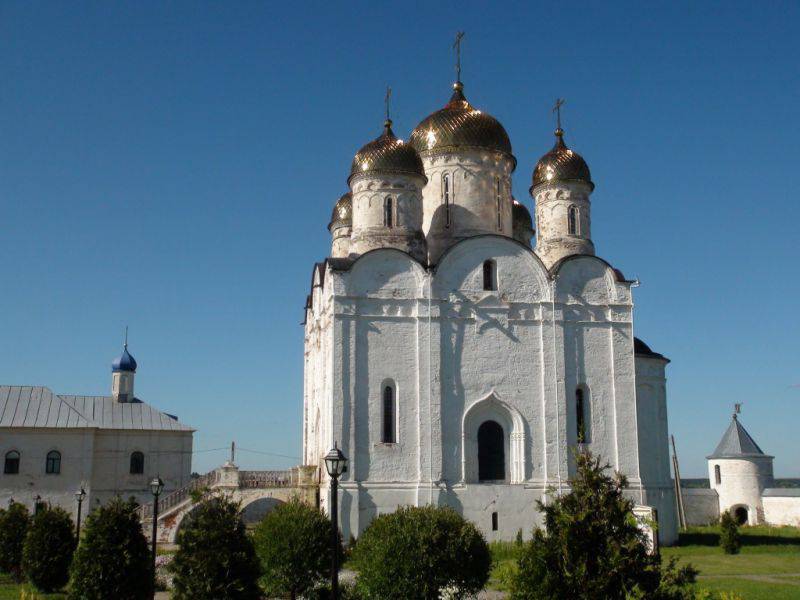 Cathedral of the Ferapontov Monastery
All three churches were built by masters from Rostov (the monasteries were part of the Rostov diocese), but, according to Mikhail Milchik, their architecture “almost directly follows the one that is known to us from the monuments of the epoch of Grand-Ducal Moscow. The first two cathedrals are cross-domed, four-column, three-apse, standing on high sub-churches, with a three-part division of facades with scapula, and culminating in three tiers of kokoshniki, which crown a large head in the center and a small one above the southeast corner. The Ferapontovsky Cathedral is surrounded by a gallery on three sides. Only Ouspensky does not have a sub-church, which makes it seem more squat compared to other temples ”... The researcher notes the continuity of not only iconographic types, but also such techniques as a combination of white stone and brick in the masonry, the use of arches, etc.

Unfortunately, the firstborn of the North stone architecture did not reach us. The majestic Cathedral of the Stone Monastery is known for its old photographs (where it appears in a heavily rebuilt form) and the reconstruction measurements of Sergey Podyapolsky. In the 1930-ies, the dilapidated temple was blown up on a brick, which was never used. “With its destruction,” wrote V. Dementiev, “the capital letter of northern architecture was deleted.” The lower tier of the cathedral remained buried under the rubble, which the restorers do not dare to touch yet - no matter how much worse it becomes.
The “younger brother” and the closest analogue of Spas-Kamnya - the temple of the Ferapontov Monastery - was preserved and museumized (it contains the world-famous frescoes of Dionysius - an object of cultural heritage from UNESCO lists). In Ferapontovo go primarily for Dionysius, but the cathedral itself, of course, deserves attention. One strikingly unprecedentedly rich decor by the standards of contemporary architecture, which completely covers the western zakomars. Researchers associate the strengthening of the ornamental component in the temples of that era with the final departure from ascetic aesthetics and the awareness of decor not as a carrier of religious load, but as a means of artistic expression. 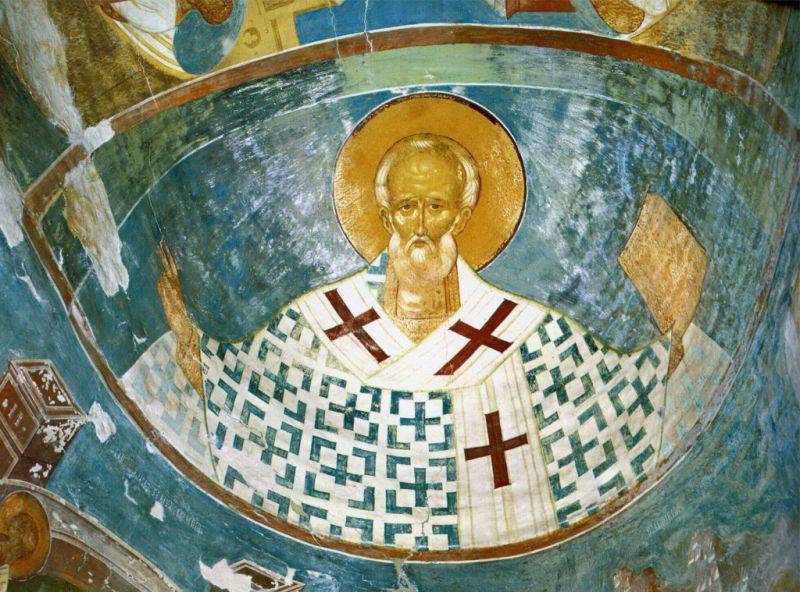 Fresco by Dionysius in the Cathedral of the Ferapontov Monastery
Traditional Russian architecture under Ivan III evolved slowly and inertia. With a number of “firing” innovative masterpieces, the absolute majority of churches in Russia at that time were built “like with grandfathers” - the mainstream at the end of the 15th century, as well as 150 years before, was asked, in fact, Vladimir traditions! The experiments of Moscow masters and the artistic search for Rostov citizens in Belozerye are exceptions, only confirming the rule: the transformation was mainly not a constructive, but an aesthetic, decorative component of temple-building. The four-column cross-domed single-domed church firmly entered the canon, but despite the abundance of single-headed “four-column squares” that were built, the quantity did not turn into quality: the theme was exhausted, the structure of the temple led to an architectural evolutionary dead end. It was a purely pragmatic moment: the “four columns” were perfectly suited for the role of the compositional center of a city or monastery and at the same time had a number of “incurable” design features that made them unsuitable as a parish church. “Congenital” fragmentation of the interior caused constraints, the inability to accommodate a large number of worshipers. A simple increase in the temple led to its fabulous rise in price and required extra-class architects ... Well, from the Russian experience, we know who is particularly cunning at fabrications. So, at the turn of the 15th – 16th centuries, not too wealthy parishes provided an evolutionary leap in temple building. And it was this “decision in favor of the poor”, and not the magnificent Assumption Cathedral that in fact determined the development of Russian architecture up to the 18th century. We are talking about Moscow pillarless temples.

They appear at the end of the 15th century (the earliest is Trifon Church in Naprudnaya Sloboda). Their appearance is associated with the need to expand the inner space of the parish church while maintaining small dimensions; on the other hand, it was the small dimensions that made it possible to apply the new method of laying the vaults. They consisted of two paired arches, installed directly on the walls along the east-west and north-south axes and intersecting at a right angle. At the intersection was placed the light drum with the head, which was the composite center of the temple. The new scheme retained continuity with the cross-domed churches: the same cross, only formed not by pillars, but by intersecting arches, the same dome, the “sky”.

In Trifonovskaya church, restored by Soviet experts, all these design features are clearly visible. The order cornice marks the level at which the vaults begin; the curvilinear roof echoes the plastic of the inner arches, and the pointed top enhances the “centripetal” composition. Not without archaising moments - such as the vertical division of the walls of the blades. In the four-column temples, the scapula accentuated the locations of the pillars; it is clear that in the besstolpny Trifonovsky temple such blades no longer mark anything, being only a tribute to the tradition, “pure aesthetics”, divorced from the requirements of the constructive. Aesthetics, however, turned out to be incredibly tenacious and preserved not only in the examples of the “late Ivan III”, which include the Nativity Church in the village of Yurkino, Istra district, built at the turn of the 15th – 16th centuries. The three-part division of the walls is preserved in the pillarless churches of the second half of the 16th century (the old cathedral of the Donskoy Monastery) and the 17th century (the Church of the Intercession in Rubtsovo) of centuries!

And yet, if you look at the Moscow beskolpnye temples, their common feature strikes you: they are all small. In the 16th century, the problem of expanding the “bestopolnik” square was constructively unsolvable, and to increase the space around the church, the chapels, sometimes surpassing the main church in the square. It turned out unusual, fresh, but ... as the “four-column” scheme didn’t fit the church of the parish, the mini-version of the “bespole column” seemed to be completely inapplicable in the developing concept of the “sovereign temple”. And so it happened that under Ivan III, the “bestopolniki” were ousted to the periphery ... However, the development of architecture in the 16th century unexpectedly brought them to the fore, having even pressed the “Assumption” line of church building!

We are forced to go beyond the era of Ivan the Great - we just have to do it: it is impossible to assess the role and place in stories our architecture of pillarless temples, not "looking to the next page" - in the era of Basil III. Under him, the “bezstolpniki” launched an evolutionary branch — they became the forerunners of stone hipped-roofed temples, the very majestic buildings that were the quintessence of the Moscow concept of the “tower-temple”, brought to the absolute the idea of ​​an architectural dominant subordinating and organizing the surrounding space! And after the Nikon ban on tents, the topic was continued by multi-tiered temples - masterpieces of the so-called Moscow Baroque ...

Yes, all this will be much later, but at the end of our story we want to focus on the fact that the architectural direction, which gave, perhaps, all the best that we have in the national architecture of the Russian Renaissance, was born in the era of Ivan III. It hardly “just coincided”: the epoch of territorial growth, strengthening of central power and gaining political independence became for our country also a time of creative search, rethinking of traditions and trying on innovative ideas - in general, finding national identity, embodied in architecture as well.

Ctrl Enter
Noticed a mistake Highlight text and press. Ctrl + Enter
We are
Sons of ivanRussian allies of Mongolo-Tatars
3 comments
Information
Dear reader, to leave comments on the publication, you must to register.