The National Interest: Chinese aircraft carriers - a nightmare for the US Navy?

25 September 2015
30
The development of the armed forces of the leading countries of the world is a traditional topic for polite discussions, bitter disputes and questionable speculations. Each new message about a particular project attracts the attention of specialists and the general public, which is why it becomes another reason for disputes. In recent years, one of the main topics of discussion was the forthcoming change in the situation in the Asia-Pacific region, associated with the development of Chinese naval forces and the construction of aircraft carriers. Already, the promising Chinese warships were able to become a cause for some concern.


Foreign analysts and journalists tend to have a different attitude to the current situation and the current development program of the Navy of the People's Liberation Army of China. A variety of forecasts are made, both neutral, and encouraging or frightening. In addition, attempts are being made to understand the situation. A good example of such an attempt is one of the last articles of the American publication The National Interest, known for its bold and interesting publications on relevant topics. On September 18, the publication published an article by Dave Majumdar Chinese Aircraft Carriers: A Nightmare for the US Navy? (“Chinese aircraft carriers: a nightmare for the US Navy?”), In which an attempt is made to determine the real prospects of the Chinese aircraft carrier fleet and associated risks for the United States.

D. Majumdar begins his material with a reminder of the key features of the current situation. Since the end of World War II, the US Navy carrier strike groups have dominated the World Ocean. Even the Soviet Union at the peak of its power could not build a similar carrier fleet and compare with its main rival in this. However, in recent years, the situation has begun to change. American experts are concerned that China is actively engaged in the development of its Navy. In the future, this may lead to a serious change in the situation on the seas. 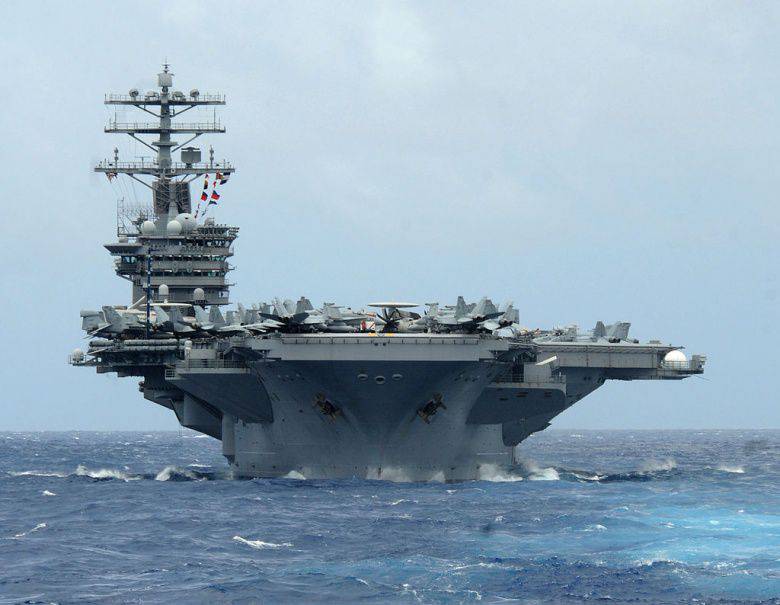 The journalist of The National Interest reminds that the Soviet command implemented the so-called. Sea denial strategy. Long-range bombers, submarines and surface ships armed with long-range anti-ship missiles were built to protect against the warships of the likely enemy. The PRC, until a certain time, also implemented such plans, concentrating on defense against potential attacks from the sea. Nevertheless, now the Chinese command, like the Soviet commanders at the closing stage of the Cold War, seems to be intending to build a powerful navy. Perhaps in the future, the new Chinese navy will even be able to challenge the fleet of the United States.

Chinese experts took into account Soviet experience and continued to use the ideas of the command of the USSR. The result was the purchase of an unfinished aircraft carrier cruiser "Varyag" with subsequent completion and commissioning. Thanks to this, the first aircraft carrier named “Liaoning" appeared in the PLA Navy. Nevertheless, says D. Majumdar, this ship is the beginning of a large and ambitious program. It seems that the Liaoning is used only as a training ship for training personnel and working out the main features of the deck aviation. It is noted that the development of all such "skills" in the US Navy took several decades.

The aviation component of the new aircraft carrier program is based on one of the earliest prototypes of the Soviet fighter Su-33, acquired by China. This aircraft was once developed on the basis of the Flanker fighter (Su-27 according to NATO classification). The study of Russian technology has allowed Chinese specialists to create their own project J-15. In addition, in parallel with the development of the first carrier-based fighter, the Chinese industry was engaged in the creation of other aviation technology. As a result of all these workings, the Liaoning spacecraft aviation group now looks like this: J-24 fighter jets, Z-15F anti-submarine helicopters Z-6F, 18 Z-4C helicopter for long-range radar detection.

Author of the article Chinese Aircraft Carriers: A Nightmare for the US Navy? notes that the Pentagon is not yet inclined to consider the Chinese carrier fleet a serious threat. In a recent report by 2015 China Military Power Report, analysts from the US military wrote that the aircraft carrier Liaoning and its air group in their current state cannot be used to project force at a great distance from the bases. The same opinion is expressed about the aircraft carrier in a fully operational state implied by the project.

Experts believe that the rebuilt "Varyag" is too small to solve a number of problems. Because of this, sufficient efficiency can be achieved only in ensuring the air defense of the fleet, including at a distance from the coast. "Liaoning", unlike the American ships such as the Nimitz, can not be used for long-distance projection of force.

D. Majumdar notes some of the main problems of the Chinese aircraft carrier program in its current state. First of all, these are the features of the available aircraft. From the American F / A-18E / F Super Hornet aircraft, the Chinese J-15, which is the development of the Soviet Su-33, is distinguished by more advanced aerodynamics, but this positive feature is leveled by some features of the aircraft carrier. "Liaoning" is equipped with a take-off springboard, which imposes strict restrictions on the weight of the payload and affects the real combat effectiveness of the aircraft.

In addition to problems with the maximum weight of weapons and fuel, Pentagon analysts draw attention to the negative consequences of the relatively small size of the aircraft carrier. The dimensions of the Liaoning affect the maximum number of aircraft on board. It is noteworthy that these problems are recognized by Chinese specialists. D. Majumdar believes that in the context of such problems one should recall the unfinished Soviet aircraft carrier Ulyanovsk. From his predecessors, he had to differ in the presence of steam catapults.

In the future, China is expected to build new aircraft carriers. In addition, there are suggestions that such construction has already begun. American analysts believe that the new ships will be built taking into account the existing minuses, and this will allow to fully unleash the potential of the existing J-15 fighter jets. Regardless of the plans of the PLA command, the construction of new ships will take some time. As a result, over the next few years there will not be a single naval group in the oceans capable of challenging the US carrier fleet.

The timing of the construction of new Chinese ships may also be affected by the lack of necessary experience. For example, the American shipbuilding plant Newport News, which several aircraft carriers have already descended from the stocks, has spent more than half a decade on building one ship like the Nimitz or Ford. Chinese industry has no experience in building such large ships. Moreover, even the medium-sized aircraft carrier Liaonin / Varyag was built in the Crimea, where all the main structures were assembled. It should be noted that D. Majumdar made a mistake here - “Varyag” built the Black Sea Shipbuilding Plant (Nikolaev).

If China can still build a new aircraft carrier that will allow it to use the full potential of the existing deck aircraft, the pilots and sailors will still face serious difficulties. It is noted that the American fighter F / A-18E / F, not being the fastest or maneuverable in the world, is equipped with modern radio-electronic equipment, increasing its combat potential. More importantly, American carrier-based aircraft do not fight alone. The modern US aircraft carrier is a complex of various means, in one way or another facilitating the combat work of the aircraft.

Using the existing combat control system NIFC-CA, the aircraft carrier is able to effectively interact with its own aviation group and other ships. Super Hornet fighters, EA-18G Growler electronic warfare aircraft, E-2D Advanced Hawkeye early warning radar aircraft, etc. can interact not only with their aircraft carrier, but also with other ships of the strike group.

Thanks to this, for example, it is possible to launch a missile from a cruiser or destroyer on a target located beyond the radio horizon of its own means of detecting a ship. Targeting in this case is carried out by long-range radar detection aircraft. In addition, it is possible to determine the coordinates of the target ship using the onboard equipment of the EA-18G aircraft. In this case, it is provided to identify the location of the ship using the EW system, with the subsequent attack of strike aircraft.

Chinese Aircraft Carriers article: A Nightmare for the US Navy? It concludes with quite logical conclusions about the prospects of the Chinese carrier fleet. D. Majumdar believes that China is really capable of building and improving aircraft carriers. In addition, the Chinese fleet will be able to form full-fledged carrier-based strike groups. However, the implementation of all such plans will take time. Building new ships and obtaining the necessary experience will be an extremely difficult and lengthy process. Indeed, China can catch up with the United States in terms of the development of naval forces. However, it will take several decades.

As you can see, the journalist of The National Interest is not inclined to downplay the success of Chinese shipbuilding. At the same time, he does not exaggerate them. Assessing the existing situation, D. Majumdar notes the achievements of the Chinese Navy, but touches on a number of issues that Chinese specialists will face in the future. To create a full-fledged carrier fleet capable of comparing with the US, China will have to create, build and master not only new ships. You will also need a wide range of different aircraft and special equipment. As a result, the program to build new aircraft carriers suitable for projection of force in remote areas of the oceans may be delayed for several decades.

This means that in the near future, the question in the title of the article can be answered negatively: no, the Chinese aircraft carriers are not a nightmare for the US Navy.


Chinese Aircraft Carriers article: A Nightmare for the US Navy ?:
http://nationalinterest.org/blog/the-buzz/chinese-aircraft-carriers-nightmare-the-us-navy-13877

Ctrl Enter
Noticed oshЫbku Highlight text and press. Ctrl + Enter
We are
Evolution of Chinese destroyersAdmiral Gorshkov aircraft carriers
30 comments
Information
Dear reader, to leave comments on the publication, you must to register.