"Haddad 1": where are the firewood?

24 September 2015
25
Recently, the Greek Coast Guard detained the Haddad 1 cargo ship, which supposedly was carrying plastic furniture for refugees arriving in Europe from the Middle East. The destination of his route, according to a representative of the Greek Coast Guard, was Misrata (Libya). Interested persons from Turkey assure that the ship’s route ran to Sudan. The Haddad 1 came from the aforementioned Turkey under the Bolivian flag; The team was made up of Egyptians, Syrians and Indians. During the search, the Greek Coast Guard found in the containers not tables and chairs, but weapon and ammo. 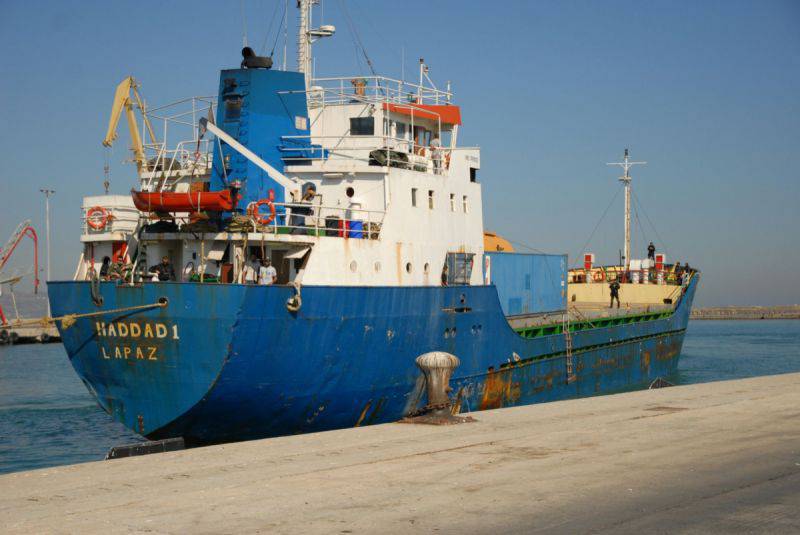 One of the primary sources of this information was the Greek newspaper. "Creta Post". The material contains a lot of pictures, which show what kind of “furniture” was carried by an international crew of a dry cargo ship.

The coast guard of Greece took into custody all seven sailors who made up the crew of the Haddad 1, which arrived in the port of Heraklion, the newspaper reports.

A careful check of the cargo revealed that the containers contained not plastic at all, but large quantities of weapons and ammunition.

At first, the police opened only two of the fourteen containers. They found 491.950 ammunition caliber 9 mm and about 5000 police type shotguns. The police for a long time counted the weapons and ammunition that were there. On the ship was a military arsenal!

Police told the press that smugglers carefully hid weapons and ammunition behind ordinary cargo (boxes, plastic cabinets, mats) in the back of containers.

The ship started its route in Turkey, and it was supposed to finish in Libya. It went under the flag of Bolivia, the crew consisted of seven people with passports of citizens of Syria, Egypt and India.

The Greek Minister for Maritime Affairs Christos Zois made a statement in which he congratulated the coast guard on the successful discovery and seizure of illegally transported weapons. He also noted that in the near future the police will receive "more information on this case."

It is curious to add on our own that in the major European media, and in the Russian too, the information from Greece went unnoticed.

The largest edition that responded to the attempt to transport a batch of weapons - International Business Times (British edition).

A senior coast guard official confirmed to IBTimes that the cargo ship was following in Misrata (Libya). Currently, this city is under the control of the Islamist group "Dawn of Libya." Meanwhile, arms shipments to Libya are under an embargo from the United Nations.

The Greek authorities have not yet established where the weapons were loaded on the ship. It was assumed that this is the city of Iskenderun in southern Turkey, in 50 km from the border with Syria: it was in this port that the Haddad 1 visited before it was intercepted by the Greeks.

The Ministry of Foreign Affairs of Turkey said the newspaper notes that the cargo was fully documented and intended for the Sudanese police. A ministry spokesman promised to cooperate with the Greek authorities if evidence of the contrary was found.

The manufacturer of ammunition ("Yavex") stated that the ammunition was not sent to Libya, but was intended for "law enforcement agencies of another country." Yavex also said that all the international shipments of their company are documented and licensed, and all activities are completely legal, and no one person in the company "can have any relation to any illegal business."

However, the Greek official told the publication that everything is completely wrong: there is nothing that would correspond to the statement of the Turkish Foreign Ministry and in general the words about the documents. He noted that "regardless of what they say," the coast guard "did not find any documents." There is no possibility of documenting the connection with the delivery of cargo to Sudan (to the state or to a private person).

Four Syrians, two Indians, and one Egyptian citizen between the ages of 20 and 51 were arrested, detained and accused of arms smuggling. Their names are not called. The investigation continues.

As for the ship, the Haddad 1 has a "hazy past." Currently, he is banned from entering any European port in accordance with the Paris Memorandum of Understanding. This cargo ship, now registered in La Paz (Bolivia), too often changed the name and flag. Its current owner is the Egyptian company Haddad Shipping SA, headquartered in Alexandria. However, its operation is entrusted to another company - “Phoenicia Maritime LLC” (based in Syria). It uses as a legal address a mailbox in the port city of Tartus, which houses the naval base of the Russian Navy, the newspaper said.

Earlier, the British edition of IBTimes wrote that this vessel was under the jurisdiction of IMS Hellenic, a company based in Athens (the port of Piraeus).

Haddad 1 was detained by the coast guard precisely because of suspicious activities in the past.

Greek detectives say they continue to conduct an investigation, the purpose of which is to identify the final recipient of the goods.

Local media, the newspaper writes, suggest that the weapons could have been targeted to terrorists from the “Islamic State” (its local branch, “Dawn of Libya”), but there is no evidence to support this statement.

A Coast Guard official admits that smugglers wanted to exchange weapons for oil. The Libyan rebels, despite the civil war, are trying to trade in "black gold". It is quite possible that Turkey, known for the support of “Dawn of Libya”, stands behind the failed deal. The publication also recalls that the group "Dawn of Libya" took control of Tripoli in 2014 year, squeezing out an internationally recognized government and sitting in the chair "competing administration." In February, 2015, the prime minister of the ousted government, argued that Turkey was "arming its rivals." This statement by Ankara was denied.

Some Russian observers believe that the weapon from the Haddad 1 was intended for the militants of the "Islamic state" who entered Europe under the guise of refugees.

Портал "Polite people" gives as many as three versions, built on conspiracy theories, the American wake, the desire of some forces to arm migrants in Europe and the like.

According to version number one, the weapon on the ship “could indeed have been sent by the IG.

“Not necessarily to Greece,” writes the unknown author of the portal, “after all, they could get off the course, and so on. But the number of weapons found indirectly confirms this particular version. ” The theme is developing like in a fan fighter: “It’s almost impossible to arm an army of migrants unnoticed. But to send the goods further is quite real. The question “who is the master of the weapon?” Remains open, but here one can guess forever. ”

So they are guessing.

In the second version, the Americans appeared: "The beloved method of the USA is provocation." The Americans, they say, spent a lot of money, and then they handed over the ship to the coast guard of Greece - in order to "once again horrify:" See what awaits you, if you do not fight with IG.

Finally, version three: “The EU itself decided to arrange a small provocation only in order to have complete freedom in matters relating to migrants.”

Seriously take the works of such "analysts", in our opinion, not worth it.

Of course, the goods have not only the manufacturer and the seller, but also the buyer. The investigation in Greece continues. Most likely, the assumption of the Libyan destination and the Turkish trace will be confirmed. In the end, Ankara is not the first time to support the “moderate opposition” in one way or another.

Observed and commented on Oleg Chuvakin
- especially for topwar.ru
Ctrl Enter
Noticed a mistake Highlight text and press. Ctrl + Enter
We are
Results of the week. "It is a sin to laugh at sick people"Refugees from Syria. Will Russia accept immigrants from the Middle East?
25 comments
Information
Dear reader, to leave comments on the publication, you must to register.