29 September 2015
38
As with the swords, the armor of the Trojan War appeared long before it began. The earliest element of the defensive armor is the bronze shoulder strap found in one of the tombs from Dendra (tomb no. 8) and relating to 1550 - 1500 BC. At first they thought it was a helmet, but later they were correctly identified as a shoulder strap for the right shoulder. There were no other parts, and this gave rise to three hypotheses:
a) the entire armor was originally placed in the tomb, but later it was removed;

b) the shoulder pad symbolized all the armor;
c) only this shoulder strap was metal, and the rest of the leather armor and it just crumbled from time to time. 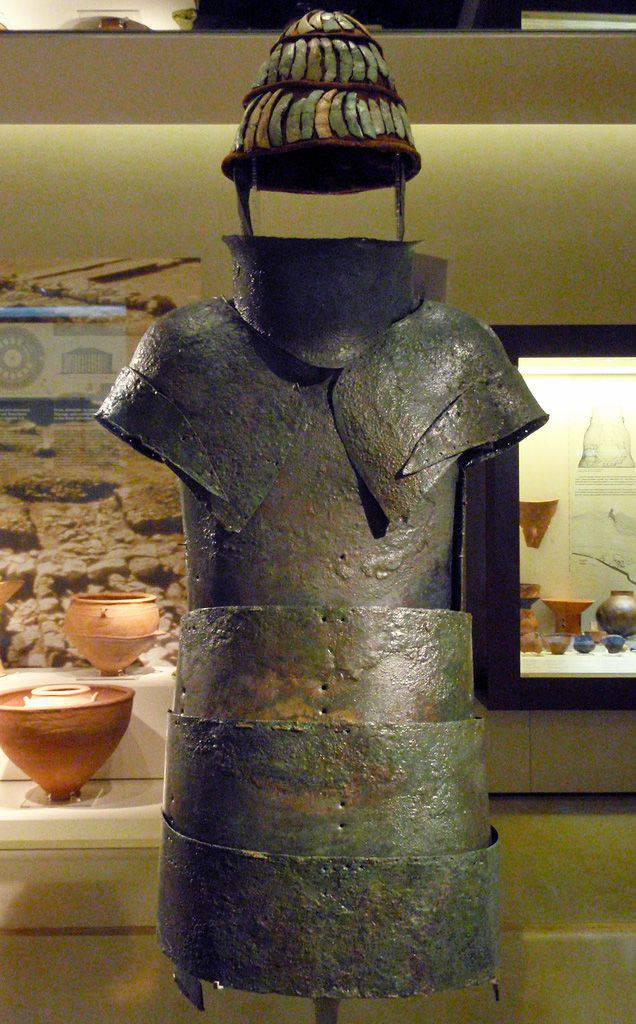 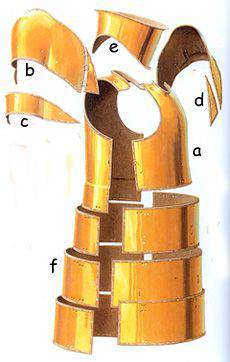 All parts have a series of small holes at the edges with a diameter of 2 mm, used to attach the lining to the inside of the shell. The lining was leather, its remains were found inside the plates. Were found thin strands of goat wool. Large holes, roughly 4 mm, at the edges of all elements were used to connect different plates with each other using leather laces. 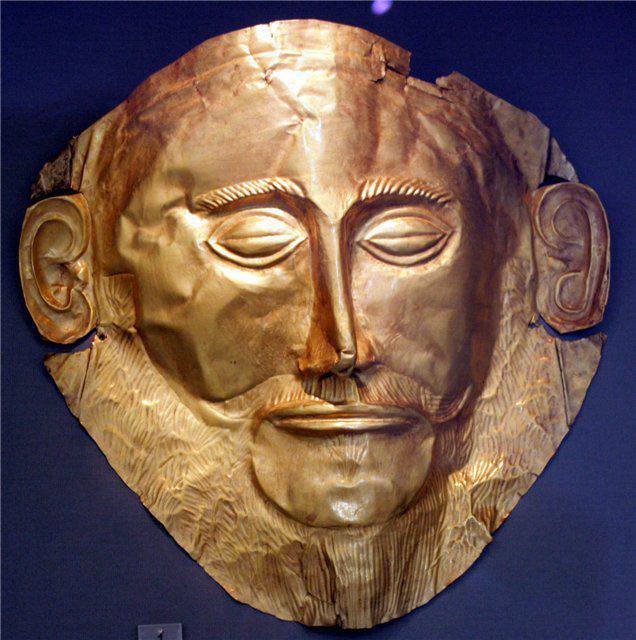 The famous "Agamemnon mask" from the "gold-rich Mycenaeans."

The armor was reconstructed, and it turned out that, despite its strange design and considerable weight, they were quite flexible and convenient for use by infantrymen, and not, as is sometimes said, exclusively by soldiers on chariots. This experimental reconstruction also leads to the conclusion that this armor was created to fight with a sword and a spear. But it’s not convenient to use onions. Protecting the throat is especially important if we recall the presence of rapier types C and D sword in warriors (see part one on swords). Of course, this does not mean that this armor was designed specifically to protect only against these swords, but this, of course, was considered by the creators of the armor. An interesting feature of this armor is the difference in the width of the armhole: for the right hand, the armhole is more than provides greater freedom of the right hand in battle. This is further evidence that the “Armor from Dendra” is intended for ground battles, and not just for parades or chariot warriors. 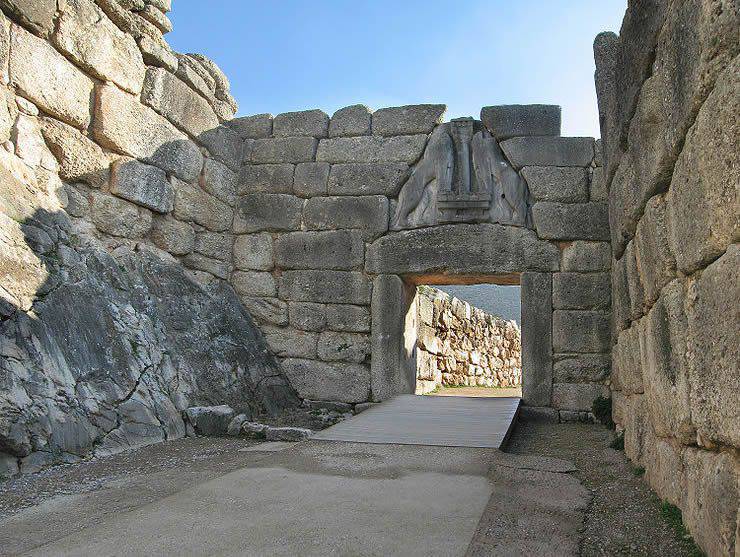 By the way, the total weight of this armor ranges from 15 to 18 kg. Considering the size of the chest plates and the analysis of the skeleton found in the tomb, it was found that the warrior who owned the “Dendra armor” was 1,75 m tall, but very slim and weighed about 60-65 kg.

The discovery is confirmed by fragments of ceramics from Mycenae (1350 - 1300 BC). In this image, a breastplate with a large nobleman is quite recognizable. Unfortunately, it is impossible to determine from this fragment whether a warrior is on foot or fighting on a chariot.

A fragment of pottery depicting a warrior in armor with a characteristic of ours.

117 bronze plates were also found (around 1370 - 1250 BC) during excavations in tombs in Messenia. They have small holes from 1 to 2 mm in diameter for attaching to the lining. That is, the platelet plate armor was also known to the ancient Achaeans.

It should be emphasized, however, that most of the armor described above was used by the soldiers of the Crete-Mycenaean culture long before the Trojan War itself. If 1250 is considered the year of the fall of Troy, then 100 is 250 years after 1100, and if this event is dated 1000 or XNUMX as a year, as some historians do, then this time becomes even longer. And from here again the question arises about the continuity and tradition of the Achaean weapons. As far as it corresponded not so much to the time of his discovery, then just the problem does not arise as to the time that interests us. That is, figuratively speaking, “could the Dendra armor be worn” by the legendary Achilles. 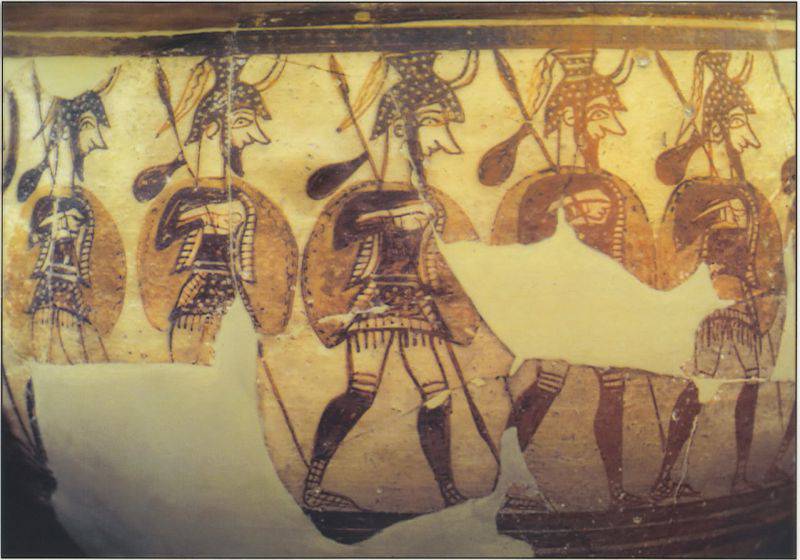 "March of the Warriors" - the image on the Mycenaean vase. Pay attention to their strange horned helmets with combs and round shields with a trimmed bottom edge.

Since bronze armor was supposed to be extremely valuable, there is every reason to believe that the same "armor" could be passed from one generation to another until it became completely unusable, or it was not buried together with the warrior in the grave. But ... the development of armor based on combat experience cannot be ruled out either, although the tradition of the ancients historical crops was exceptionally high. In Japan, for example, almost until now, everything old was considered better than new, so a chipped tea cup is valued more than a new one!

At the same time, in the rest of Europe, solid forged bronze armor and, in particular, bronze cuirass were also used. They were found in Slovakia, Hungary, and Italy, since they bordered on the Achaean civilization and either borrowed them, or bought them, or ... got them in battles.

Thus, for example, well-preserved bronze cuirass found in the Danube near Pilismaroth of Hungary (1300 - 1100 BC) reached us. 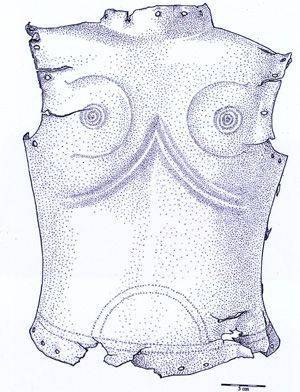 A fragment of an armor plate in Slovakia was found (around 1250 BC) A fragment of a cuirass from Cerna nad Tisou, Slovakia (1050 before 950 BC) was also found. True, all these finds are fragmentary. But they are indicative in the sense that they prove the presence of such armor at that time. That is, in the Bronze Age, metal armor was not such an amazing rarity! In fact, these were the real ones ... knight armor, covering the torso, neck and legs to the knees, or lamellar ("scaly") armor, again very similar to the later ones, but made of bronze, not iron. That is, somewhere from the 15th century to the fall of the Aegean civilization, the level of metalworking that was characteristic of it was very high.
Well, the later images of the heroes and scenes of the Trojan War, made by the classical Greeks, have no real relation to the past. That is, we see signatures under (or above the figures): Achilles, Ajax, Hector, but these are nothing more than artistic images associated with the peculiarity of the lack of historical thinking in people of that time. What they saw around them, they also projected onto the past. Therefore, shield-goplon, "helmets with ridges" and muscular cuirass from the arsenal of soldiers of the Trojan War should be excluded. Including future designers of the Iliad and Odyssey books published for children!

Ctrl Enter
Noticed a mistake Highlight text and press. Ctrl + Enter
We are
Once again on the issue of reconstructing the weapons of the era of the Trojan War. Warriors in armor and helmets (part 12)Armor warriors of the Trojan War. Helmets (part three)
38 comments
Information
Dear reader, to leave comments on the publication, you must to register.