23 September 2015
53
Among the potential candidates for the presidency of the United States from the Republican Party, there is not a single peaceful person, said Paul Craig Roberts. In his opinion, even the woman Karlie Fiorina is the instigator of war. The militarists can throw her some money, and she will begin to build up the arms race to counter the "Russian threat." In parallel with the article by Roberts in the American press appeared the material of Senator Marco Rubio, who also marks the presidency. This one said bluntly: Putin has attacked international security, and Washington must respond to him and "help the victims of the Russian aggression."


On the Paul Craig Roberts Website An article appeared on the republican lineup of potential candidates for the presidency of the United States.

All candidates from the Republican Party are supporters of the war, the author believes. Even the woman, Carly Fiorina, described in a debate how she would "lead us to Armageddon," says Comrade Roberts. No, she will not say anything to Putin’s face, but will send him a message through military threats: “Having met with Vladimir Putin, I won’t talk to him at all. We told him too much already. What I will do immediately is begin the restoration of the Sixth fleet, I will begin the restoration of the missile defense program in Poland, I will regularly conduct aggressive military exercises in the Baltic countries. I will probably send several thousand soldiers to Germany ... ”And so on.

According to her, who quoted Paul Craig Roberts, with President Putin do not need to talk. The only way to show "strength and determination" is to let Putin know that everything is "under our control."

Among the Republican candidates there is not a single peaceful person, the publicist believes. Fiorina he calls "heartless female." She showed the military and industrialists in the United States that "you can buy it too." The militarists could have transferred her donations, to take part in her election campaign. In the event of her winning the election, the cash flows will “rush back” to the military-industrial complex, to the creation of weapons - this will become her “message” to Putin.

Alas, only such a message is American politicians are ready to send to Russia - a message about the war. The Pentagon again ordered his theater to stage a play called “The Russian Threat”.

What did Russia do to make Washington prepare a military response? “How, don't you know? - ironically Roberts. - Russia invaded Ukraine! <...> But the strangeness: if Russia invaded Ukraine, why does Ukraine still exist? If a weak and insignificant Ukraine has repelled an attack from Russia, how can Russia pose a threat? ”

To cope with the “Russian threat”, Washington sent German fighter jets to patrol the Baltic sky. Washington claims that it is not directed against Russia. Then against whom? Maybe these military planes are there to protect the Baltic countries from Iran?

This folly is to provoke Russia and lie to it. Washington has long taught Moscow that you can't believe the White House. Russian President Vladimir Putin has often noted that Washington’s provocations and propaganda erode trust between nuclear powers, thereby increasing the risk of nuclear war. But Washington, the publicist points out, "is filled with arrogance and arrogance," and "hears only himself."

Back in February, 2012, President Putin made it clear that Russia rejected the Washington policy of "airstrikes of democracy," abolishing the norms of international law and built on military force. Three and a half years later, “morons competing for the Republican presidential nomination show even more clearly that they do not hear what was said by Russia.”

And there is no difference who will be elected in the USA - one of the Republicans or Democrats. The result will still be war, I am convinced Roberts. Both parties are going to appropriate the social, medical and retirement benefits of Americans - because the Americans will become corpses.

One of the exemplary American "warriors" from politics, constantly talking about the "Russian threat" - Marco Rubio.

21 September edition "National Review" His article was published, full of the words "Russia" and "Putin." 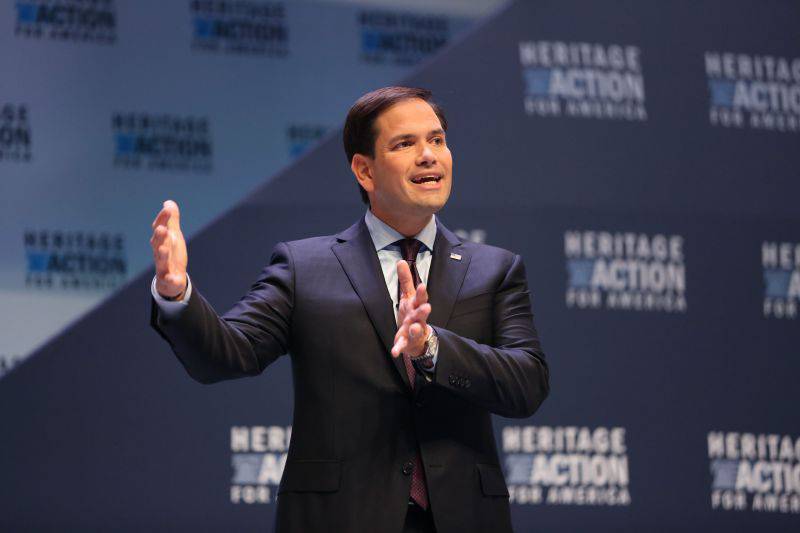 Marco Rubio speaks at the Heritage Foundation in Greenville, South Carolina. 18 September 2015 of the year

M. Rubio, a senator from Florida, believes that Putin is expanding its influence in the Middle East, and Washington should respond to it.

Since then, the author writes, as Hillary Clinton, as Secretary of State, announced a “reset” of relations with Russia (2009 year), Washington’s policy toward Moscow led to a “humanitarian and strategic nightmare”. The Russians chop off Crimea from Ukraine and staged a war in Eastern Ukraine, writes Rubio. The “reset” led to a long-lasting Syrian crisis.

All these “failures”, the author argues, did not help B.H. Obama to understand the goals of Vladimir Putin. But everything is simple: Putin wants Russia to be recognized "as a geopolitical force." Moreover, the Russian president "has already achieved this in Europe, and now he is pursuing the same goal in the Middle East, using the vacuum left by President Obama." Obama and his Secretary of State Kerry are still "naively hoping that Russia can be part of the solution in Syria."

But after all, in recent weeks, Russia, which already has a naval base in the port of Tartus, is building up its military forces in Syria, the author recalls. The Russians are building an airbase and are pushing troops into the region, including attracting "veterans of the dirty war in Ukraine." The forces of Assad are supported by airplanes.

Perhaps in this way Putin is trying to “divert attention from the ongoing chaos in eastern Ukraine.” But the White House does not realize this, and some administration officials are even hoping for cooperation with the Russians in the fight against IG.

As Rubio believes, “in the absence of American leadership,” Syria has become “a platform for the malignant anti-American forces like IG, Al-Qaida, Hezbollah, Iranian Quds. Now there are also Russians. The situation will only get worse until the United States ensures its leadership in the region. Rubio offers to cooperate "with moderate elements of the opposition" and "to intensify the training of the rebels." The latter should, according to the senator, fight simultaneously with both the IS and Assad.

As for Russia, it is time for Washington to recognize that the “reset” has failed. Now the United States must resist Putin’s attacks on international security principles. Yes, the US and the EU have imposed sanctions on Russia, but “much more” should be done: Russian companies, especially state-owned, should be banned from cooperating with Western markets altogether.

The US must also "help the victims of Russian aggression." “To the democratically elected government of Ukraine,” Mr. Rubio is ready to “provide weapon"(Lethal). And the NATO states should designate their forces at the borders of Russia. Putin must learn, the author writes that he "cannot do with the Baltic countries what he did with Ukraine."

In general, Washington should "replace the policy of weakness with the policy of force" and "restore American leadership." "The policy of retreat and cost cutting President Obama" made the world a "more dangerous place."

"We cannot allow Putin to wreak even more chaos in the Middle East," says Rubio.

And even Donald Trump, we will add from himself, who this summer was ready to “make friends” with Putin, is now posing as a macho.

According to the billionaire, B.H. Obama does not help Ukraine enough, which has to defend itself against the military offensive of the Russian-supported rebels. “Our president is weak; all that we hear today is empty words, - said he, speaking as a videoconference at the Kiev forum "Yalta European Strategy." “Part of the problem for Ukraine and the United States is that Putin does not respect our president at all.”

However, we should note that D. Trump's "force" theses and his attitude towards V. Putin can be clarified at the UN General Assembly in New York. According to some assumptions that flashed the other day in the world press, Vladimir Putin and the American billionaire could meet on the "fields" of the General Assembly. Press Secretary of the President of Russia Dmitry Peskov stressed recalls "Lenta.ru"that Putin is open to contacts contributing to the strengthening of Russian-American relations, and any meetings promoting the withdrawal of Russian-American relations from the “state that leaves much to be desired” are welcomed in the Kremlin.

Unfortunately, we’ll add in conclusion that the policy statements of potential US presidential candidates are really based on "force" decisions and the thesis about the "Russian threat": it has become fashionable both among Republicans and Democrats to label Russia as a geopolitical enemy, to criticize "weak Obama" and invite the American people to a bright democratic future, where the United States is once again becoming the generally recognized world leader, and the Russians are crushed by sanctions and frightened by the Pentagon and NATO.