"Crankshaft" did not work


Sole possession of nuclear weaponsmultiplied by the power of first-class strategic aviation, became for Washington a kind of dizziness from success.

American journalist Arnold Brophy in his book The Air Force (“Air Force”) emphasized: “Aviation supported every offensive operation by American troops. In the war against Japan, she, using the most powerful modern weapon, managed to put the enemy on her knees, although his army remained efficient, and the country was unoccupied. ”

Let us leave disputes out of the article, which brought Japan to its knees - the atomic bombardment of its cities or, nevertheless, the defeat of the Kwantung Army by Soviet troops. But the thesis of the use of nuclear weapons by bombers to break the enemy’s ability to resist, after which it remains to accept its surrender, pretty much turned the head of some of the American military. 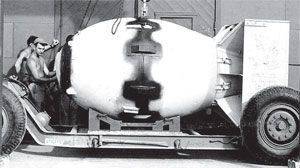 The Pentagon launched nuclear planning against the USSR very quickly. In the first half of 1946, four versions of the first American plan for an atomic war against the USSR, called Pincher (“Pincher”), fell on the maps and explanatory notes to them. Based on the successful experience of strategic bombing of Germany and Japan, he envisaged the conduct of a total air war against our country. According to the Pincher plan, bombers with atomic and conventional bombs on board were supposed to attack the Soviet Union from advanced air bases in the British Isles, Egypt and India. Industrial areas, centers of the military industry (primarily aviation and tank), large railway junctions, ports.

However, Pincher was not officially approved and proved to be a kind of touchstone in planning a war against the USSR. The next such plan was Boiler (Kipilnik, 1948), which took into account some reduction in the total US military resources and provided for the need for ground defense operations in Europe to deter Soviet forces at the Rhine line.

According to the plan, Boiler was not only allowed, but was also considered as an important factor for achieving the goals of the war, the massive death of the population and the destruction of political and administrative centers. However, in this regard, as early as October 1945, the committee of the chiefs of staff of the US armed forces presented to the government a document that contained ideas on the impact of nuclear weapons on the development of military strategy. In particular, it pointed out the desirability of the use by the United States of nuclear weapons against major industrial centers of a potential adversary in order to break the resilience of its population.

The development of the approaches reflected in the plans of Pincher and Boiler was the Crankshaft (“Crankshaft”), which also focused on the destruction of the population. However, on reflection, the staff officers issued an analytical report in 1949, in which they concluded that by destroying 30 – 40 percent of the Soviet industry in the first “preventive” strike, the US still could not overcome the Soviet people's will to defend. On the contrary, such a blow, despite the horrific consequences, will only rally them.

The successful test of 1949 in the year of the Soviet nuclear weapons pretty much discouraged the American establishment. We did not expect such a quick return from our atomic project.

It must be said that the year of completion of work on one plan or another did not at all signify the start of a war against the USSR Thus, the Dropshot (“Short strike”, 1949) was based on the hypothetical possibility of a military clash with the Soviet Union only in the 1957 year. According to this plan, it was planned for the USSR to drop 30 atomic bombs during the first 300-day phase of the air offensive (the earlier Charioteer, Ariar, which appeared in the middle of 1948, provided for a smaller number for this phase — 133 bombs against 70 cities, from eight of them were intended for Moscow and seven for Leningrad).

In fact, at the time of these plans, America’s nuclear arsenals were limited. Therefore, the plans focused on their growth in the following years, which only from 1948 began to pick up high rates. If in the 1946 year, the US military had nine nuclear bombs with a total power of 180 kilotons, in 1947-m XonMX on 13-kilotons, in 260-megatons, and in 1948-megatons The first mass-produced American atomic bombs Mk-III (the type of Fat Man plutonium Fat Man dropped on Nagasaki) were hand-made items. In Los Alamos, one such bomb was assembled by a team of 50 people for two days, moreover, it could be in combat condition for 1,25 hours, after which it had to be disassembled to replace the batteries, ensuring the operation of the fuses. Yes, and Urchin neutron fuses had to be changed frequently on these bombs because of the short half-life of polonium-1949 used in the fuses. The upgraded model Mk-IV, which the Americans themselves describe as the first truly fully functional, appeared only in the 170 year. By the way, on board the bomber the bomb case was separate from the nuclear charge, which was installed just before the dumping.

It is obvious that all the gossip about the possibility of the United States to unleash large-scale nuclear aggression against the USSR immediately after the end of World War II is groundless, but the growth of the American potential (taking into account qualitative improvement) in the future posed a serious danger. The Soviet Union entered the nuclear race with only five RDS-1 atomic bombs in the Arzamas-16 special storage facility, which was almost 60 times smaller than the Americans, this is the data for the beginning of 1950. After five years, the number of Soviet warheads increased to 200, and the gap with the States was reduced to elevenfold. And by the beginning of 70's, the Soviet Union had the opportunity to launch a preemptive nuclear strike on the US that would destroy about 70 percent of their industrial potential and about 9 / 10 combat strength of the armed forces. Thus, strategic parity was achieved - the “equilibrium of fear”.

Ctrl Enter
Noticed oshЫbku Highlight text and press. Ctrl + Enter
We are
Three whales of American nuclear deterrence"Step to war? ..." (assessment of the current state of control over the non-proliferation of nuclear weapons on the example of the Middle East countries)
Military Reviewin Yandex News
Military Reviewin Google News
40 comments
Information
Dear reader, to leave comments on the publication, you must sign in.