23 September 2015
28
Due to the modernization of the withdrawn equipment it is possible to drastically reduce the loss of troops in the offensive.


For ground forces, one of the most difficult and dangerous types of combat is an attack to break through a pre-fortified defense. An appropriate combat vehicle system and effective tactics for their use are needed. Modern motorized rifle subunits do not satisfy these conditions.

What is a fortified defense? For example, a motorized rifle platoon of the Russian army defends a zone of up to 400 meters along the front and up to 300 meters in depth. In the platoon stronghold, trenches are created for infantry fighting vehicles, tanks, Armored personnel carriers, guns, anti-tank forces, long-term firing points are being erected. The front edge of the defense creates a zone of continuous multi-layer fire, as well as anti-tank and anti-personnel minefields and wire fences.

The tactics of attack of a motorized rifle company depend primarily on the combat vehicle system, which is in service with the army. Currently, the Land Forces are armed with tanks (T-72, T-80, T-90) and infantry fighting vehicles (BMP-1, BMP-2, BMP-3).

In the current Combat Regulations of the Ground Forces, it is prescribed that a platoon stronghold should attack a company on the 500 meters as part of three motorized rifle platoons and a tank platoon, that is, three tanks and 10 BMPs, only 103 people and 13 combat vehicles. Other units can be attached to the company (anti-tank, engineering ...) There are a number of fundamental flaws:

1. The speed of a company in attack is determined by the capabilities of the soldiers advancing on foot, that is, five to seven kilometers per hour. Obviously, the faster the attack, the less the loss of the attackers.

2. Poor minefield overcoming. If the tanks have mine trawls, then they make three passes through which, with continuous multi-tiered fire, the defenders must go through the 63 man and the 10 BMP in turn. At the same time, the combat order of the company is disrupted, which inevitably leads to large losses in manpower and equipment.

3. The soldiers are armed with machine guns and anti-tank grenade launchers, of little use for fighting dots, tanks dug in the ground, infantry fighting vehicles, armored personnel carriers and soldiers hidden in full profile trenches. Whereas the attackers are essentially defensive targets for the defenders. BMPs that move behind motorized riflemen also have little chance of surviving an attack.

Although before and during the attack, the defense is subjected to artillery and mortar attacks, aviation and missile forces, the experience of past wars shows: it is not possible to completely suppress the defense.

"Armata" and "Kurganets" will not change anything. After adopting these machines for an attack with a fortified defense, as prescribed by the Battle Regulations, they will have the same drawbacks as the T-72, T-80, T-90 and BMP-2, BMP-3, which now stand. That is, motorized rifle companies, and in this case remain inefficient with the attack of a fortified defense.

The question arises: what kind of attack tactics are necessary for a successful breakthrough of the enemy’s fortified defense and what is the need for a combat vehicle system?

Robots in the forefront

In order to minimize human and material losses during an attack of a fortified defense, it is necessary to create robotic companies (PP), armed with tanks and infantry fighting vehicles, also remotely-controlled combat robots (DMRs) and assault vehicles (CMM). 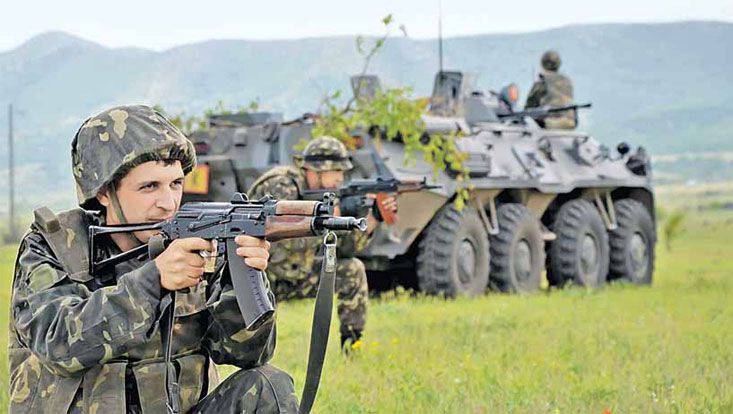 The simplest robotic military equipment is remotely controlled by the operator using a cable or radio channel.

An experimental robotic complex based on the T-72 was created in Russia, providing remote control of a tank at a distance of up to two kilometers. With the help of repeaters, the distance over which remote control is possible can be increased many times.

PP can be created relatively quickly. It is expedient to develop the CMM based on the modernization of T-72, T-80 on the Armata or T-90 platforms. To convert a tank into a CMM, you need to replace the combat compartment with a new, equipped 152-mm howitzer, 30-mm cannon, 7,62-mm machine gun, horizontal automatic loader. Howitzer barrel per ton is lighter than a millimeter 125 tank gun, the angle of elevation is up to 60 degrees. The tank howitzer can fire Msta for ammunition - high-explosive fragmentation projectiles (OFS) 3ОФ64, whose effectiveness is four times higher than that of the 125-mm tank IFC 3ОФ26. The 152-mm 3-O-13 cassette is all the more effective than the 125-mm tank OFS 3OF26 for splitting action on open targets. The “Krasnopol” guided missile hits targets with a probability of 0,8, while the expenditure of shells decreases by a factor of 10 – 15. The firing range is 13 kilometers, the velocity of the projectile is 500 meters per second.

In the upcoming robotic company there are, in addition to nine 125 caliber guns, millimeters, three 152-mm howitzers with high-explosive fragmentation guided missiles "Krasnopol". This allows you to conduct a contactless fight with the enemy at a distance of 13 kilometers, which provides a reliable defeat of both existing and prospective armored vehicles, as well as other targets, both from closed and from open positions.

For contactless combat, a company commander must have the necessary means that cannot be based solely on the GLONASS space navigation system because of its weak security - in case of a large-scale war, it is necessary to create local protected army reconnaissance, targeting, navigation, communications and control systems.

In the USSR there were no assault vehicles, which led to large losses of tanks and self-propelled guns in urban battles. For example, in Berlin in 1945, at least a thousand of our combat vehicles were destroyed. In Russia, there is also no similar technology. Hence, large losses of equipment in urban battles, for example, in Grozny in 1995, the 225 combat vehicles were shot down.

Echelons go on the attack

When using a system of four types of vehicles - OCR, CMM, tanks and infantry fighting vehicles, it is advisable to use the following attack tactics in three echelons when breaking through a fortified defense.

In the first, six MFA trawlers are attacked. Their main task is to make passages in minefields for combat vehicles with crews and conduct reconnaissance in battle. OUBRs stop at the front edge of the defense at a distance safe from breaking their ammunition, and destroy live firing points and infantry in the first trench from the scene.

In the second echelon, three tanks and three CMMs go over to the attack behind an OUBR at a distance of 0,2 – 2 kilometers. The distance depends on the firing time of the defense, and the longer it is, the greater must be the distance between the first and second echelons. After breaking through the tanks and the CMM in the platoon's stronghold, they suppress those firing points that survived the missile, artillery, mortar and bombing attacks on defense.

In the third echelon, seven infantry fighting vehicles are moving, the troops of which dismount at the edge of the defense under the guise of fire from an OAK, tanks and a CMM. The riflemen suppress the remaining manpower and prepare to repel a counterattack. Then a similar attack is carried out on the second line of defense, and so on.

Thus, six DUBRs (1-th echelon), three CMM and three tanks (2-th echelon) and seven BMP (3-th echelon) participate in the operation. In total, there is a person in the attacking company 82, which is 21 less than the payroll of the modern MSR, attacking in one echelon, but in three lines, as required by the Battle Regulations. The cost of a company’s new weapons with an OAK and a CMM is higher, but the casualties will be minimal, and the likelihood of defense breakthrough becomes maximum.

PP have no fundamental flaws. They attack three to four times faster, effectively overcome minefields, provide better protection for motorized infantry during an attack. In terms of firepower (the number of CFCs in a volley), the RR is seven times greater than the firepower of the MSR, it is able to fight on a distance of up to 13 kilometers.

Attacking units face the task of countering modern anti-tank weapons, as well as electronic warfare systems. To solve it, tanks, infantry fighting vehicles must have both individual and collective protection. Attacking companies must be reconnaissance-strike complex, included in a single tactical unit control system.

Not yet called robots

In this case, in the first echelon, six tanks with mine-sweepers attack the fortified defense, in the second echelon - six tanks, and in the third echelon - seven infantry fighting vehicles with motorized infantry. Further, the attack develops in the same way as in the case of PP. Before and during an attack on defense, mortar, rocket-artillery, and bombing strikes are inflicted, especially on strongholds near the first and second trenches. This option should be used to train the troops to effectively attack a fortified defense.

The troops, even before the creation of the DUBR and the CMM, must work out a combined attack in three echelons against the fortified defense, using the equipment available in service, which will ensure a continuous increase in combat capability. For this, it is necessary to make appropriate changes to the Ground Forces Combat Regulations.

The main disadvantage of using only tanks to break through fortified defense is that they are not sufficiently adapted to combat anti-tank weapons and are unsuitable in battles in the city and the mountains. A small angle of elevation of the gun does not allow firing from closed positions and on the upper floors of buildings in the mountains. Therefore, in order to break through a fortified defense, assault vehicles must be involved with tanks that have great firepower and are capable of fighting not only in the field, but also where the tactics of the battle must be different. In this case, soldiers, as a rule, dismount and they must be supported by assault vehicles.

Let's compare the composition and structure for those parts of the motorized rifle and robotic brigades (RB), which participate in the attack on the fortified defense. In this case, the number of vehicles with crews is almost the same in the MSC and RB, but in Belarus there is an additional 54 tank robot, although there are more soldiers and officers in the 280 MSC.

At present, of those tanks that are in service with the Russian army, it is possible to form robotic brigades capable of penetrating a fortified defense. For example, to create 30 RB you need 2430 tanks: 810 must be upgraded into assault vehicles and converted into 1620 into robots. It is advisable to use the equipment removed from service, but retained combat capability. This is the fastest and cheapest way. Of course, a longer and more expensive way of creating assault brigades is possible - the development of new specialized vehicles for solving the above tasks.

Ctrl Enter
Noticed oshЫbku Highlight text and press. Ctrl + Enter
We are
About revolution in military scienceResponsible for everything combat
Military Reviewin Yandex News
Military Reviewin Google News
28 comments
Information
Dear reader, to leave comments on the publication, you must to register.