October 5 2015
10
The medium-range air-to-surface missile X-59 Ovod had rather high range and accuracy characteristics. In addition, this product had great potential for modernization. In particular, the telecontrol control systems used made it possible to maintain communication over distances of at least 100 km with a missile range of no more than 40 km. After analyzing the available capabilities, the specialists of GosMKB Raduga began to create a modernized version of the existing rocket. The new project received the designation X-59M "Gadfly-M".


Work on the project “Gadfly-M” began shortly after the adoption of the basic X-59 missile. The creation of the X-59M was headed by I.S. Seleznev, previously engaged in the base model weapons. In the course of the new project, it was planned to improve the performance of the rocket by increasing the flight range. The simplest and most obvious solution to this problem - the use of a different engine - in practice led to the emergence of a completely new rocket, retaining only the main features and some of the components of the base product.

Shortly before the start of the development of the X-59 project, the domestic industry created the RDK-300 compact turbojet engine designed for use on long-range cruise missiles. This product was distinguished by a rather high load and relatively low fuel consumption. Specialists of GosMKB “Raduga” could not pass by such a novelty and decided to use it in their new project. Thus, the promising missile "Ovod-M" was supposed to differ from the base product not only by type, but also by the class of powerplant: it was proposed to replace the solid-propellant rocket engine with a turbojet. 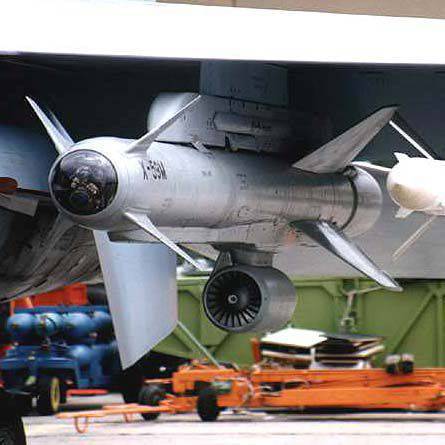 Rocket X-59M under the wing of the aircraft. Photo Rbase.new-factoria.ru

The guidance system and other units of the base X-59 rocket were considered successful, which is why they were not planned to be replaced with new ones. Nevertheless, the project turned out to be quite difficult due to the replacement of the power plant. To preserve the existing characteristics and improve some parameters, we had to seriously re-arrange the internal volumes of the rocket body, as well as change the composition of the equipment. Also, some improvements aimed at improving the aerodynamic characteristics, were subjected to the plane.

Like its predecessor, the X-59M rocket received a cylindrical body with a hemispherical transparent head fairing and a gargrot on the bottom surface. The total length of the product has increased to 5,69 m. The case diameter is 380 mm. At the head of the case, a set of four destabilizers of a folding structure has been preserved. To reduce the size of the rocket during transportation, destabilizers were folded along the hull and should have been opened in flight. To preserve the required aerodynamics and controllability, it was necessary to use destabilizers of a larger area. In the tail part of the body there are swept wings with a span of 1,26 m. Also in the tail there were fastenings for the starting engine, made in the form of a detachable first stage. After all the improvements, the launch weight of the rocket increased to 920 kg.

Due to the radical processing of the power plant, the new rocket has lost its engine side nozzles. It was proposed to mount a new turbojet engine not inside the hull, but on the outer pylon. Under the gargrotto of the hull, a small pylon was provided on which a cylindrical engine cover was placed. To protect against foreign objects, the engine air intake was equipped with a cover-fairing discharged after launch.

In the course of the modernization, the Ovod-M rocket retained the control systems of the base product developed by NPO Tekon. The weapon was equipped with a television homing head, autopilot, telecommand system and other equipment. As before, two basic operating modes of control systems were proposed: autonomous and autonomous-navigator. In the new project, it was decided to use the full potential of the control systems, which led to a significant increase in the flight range. The telecommand system provided communication between the aircraft carrier and the rocket at ranges up to 140 km. Thus, it was possible to bring the missile range to 115-120 km from the launch point.

Methods of combat work remained the same. In the autonomous mode, the weapon operator enters the coordinates of the target into the memory of the control systems, after which the launch is made and the rocket flies to the specified area on its own. When approaching the target, the operator, using the video signal output on his console, must find the target, aim the target mark on it and give a command to capture it. Further operations are carried out by a rocket independently.

Autonomous navigation mode implies direct control of the rocket by the navigator-operator throughout the flight, up to hitting the target. However, due to the complexity, this technique has some serious drawbacks that make it difficult or impossible to use it in a number of situations. Moreover, according to some data, it was decided to abandon this regime due to the impossibility of its full application.

The use of existing guidance systems made it possible to maintain accuracy parameters. The X-59 and X-59М rockets have similar indicators of circular probable deviations when flying to the maximum range - 2-3 m.

The refusal of a solid fuel engine inside the hull led to the release of large volumes. Part of the vacated space was given under the fuel tank, and the rest of the volume used to increase the warhead. Two new combat units were developed for the Ovod-M rocket: penetrating high-explosive weighing 320 kg and cluster weighing 280 kg, carrying cumulative fragmentation submunitions.

With the help of the new turbojet engine RDK-300, the flight characteristics of the rocket were maintained at the level of the base product. The flight speed using a cruising engine reached 860-1000 km / h, the maximum firing range - up to 120 km. The control equipment provided flight above ground at altitudes from 50 to 1000 m. There was also a flight mode above water at an altitude of 7 m. 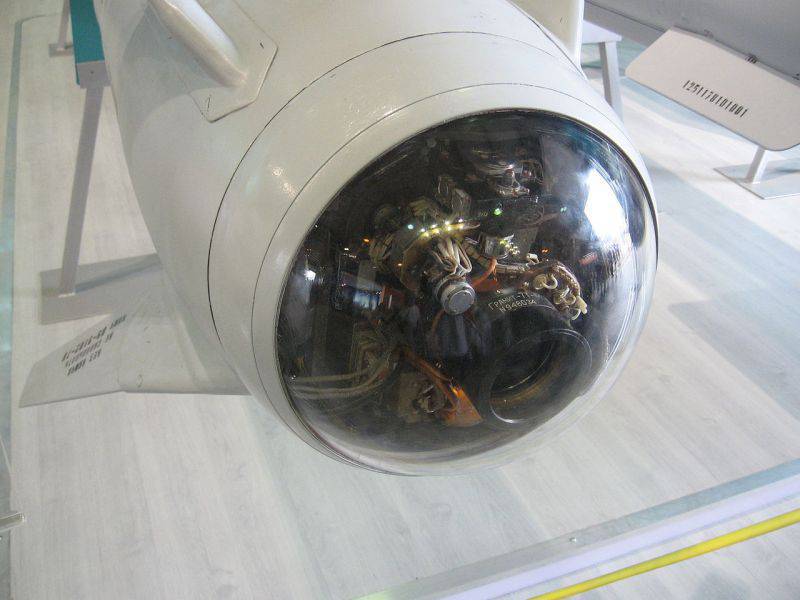 It was proposed to use X-59 and X-59M missiles to transport and launch aviation ejection devices AKU-58-1. Such systems could be used on various carrier aircraft. The rocket was discharged at carrier speeds in the range of 600-1100 km / h and at altitudes from 200 to 5000 m.

In addition to the ejection device, the new hardware container APK-9 was included in the additional equipment of the aircraft carrier. Like its predecessor, the new container maintained contact with the rocket when maneuvering or leaving the aircraft from the launch area. In addition, with the help of new equipment, the existing potential for increasing the range of controlled flight was fully used.

The X-59 “Gadfly” guided missile could only be used by Su-24M front-line bombers. In the Ovod-M project, it was decided to expand the list of potential weapon carriers. Due to some modifications of the hardware container and the control equipment of the new rocket carrier, the Su-27 fighter has become. In the future, work on the adaptation of missiles to new carriers continued, with the result that MiG-59, Su-29, etc. aircraft could be equipped with X-30М products.

The design work and testing of the new X-59M rocket ended at the very end of the eighties. Soon, this weapon was put into service and put into series. To supply serial missiles was Smolensky aircraft factory. Nevertheless, mass production went extremely slowly and could not satisfy all the demands of the military.

In the early nineties, the armed forces of the USSR, and then Russia, faced a host of economic and political problems. Due to funding cuts, we had to “cut back” orders for new weapons. Various types of equipment and weapons, including the Ovod-M missiles, fell under such a reduction. In addition, due to the division of the country, some enterprises engaged in the project remained abroad. Thus, the Air Force received a new weapon, but its quantity left much to be desired.

The layout of the rocket and instrument container APK-9. Figure Airwar.ru

It is known that in the winter of 1994-95 of X-59М missiles (according to other data, older X-59) were used during the war in Chechnya. Because of the difficult weather conditions in the highlands, only four starts were possible. The use of rockets with television homing heads was hampered by fog, precipitation and other weather factors. As a result, the Air Force pilots did not have the opportunity to fully use the new weapons. After several launches, it was decided to discontinue the use of such weapons due to low effectiveness in the existing conditions.

In 1993, the first public demonstration of new missiles took place at the MAKS aerospace show. Soon, in trying to obtain contracts for the supply of weapons to third countries, the Raduga GosMKB presented an export version of the X-59МЭ rocket. Currently, this weapon is offered to customers under the name "Gadfly-ME". The export version of the rocket has minimal differences from the base, due to which the characteristics of these samples are at the same level.

To date, the X-59М2Э rocket has been developed for use as part of the Ovod-ME complex. It differs from the basic version with a larger starting mass (up to 960 kg) and the possibility of increasing the maximum flight range from the original 115 km to 140. In addition, during the modernization of the rocket received an updated television GOS with a more advanced camera. This update allows you to use a rocket not only during the day, but also in the dark. Otherwise, both export missiles are almost the same.

At the end of the nineties, Raduga GosMCB specialists started another X-59MK missile modernization project aimed at improving the performance and “mastering” the new specialization. The result was the appearance of the X-59MK anti-ship missile, first presented at the MAKS-2001 cabin. Later on, on the basis of the X-59MK product, two new multi-purpose rockets with different characteristics were developed. The development of the X-59M family of missiles continues to this day - the latest project to modernize these weapons was presented at the recent MAKS-2015 salon. Thus, the modernization potential of the family has not yet been exhausted.

Due to interesting innovations, primarily related to updating the power plant, the authors of the X-59M Ovod-M project managed to significantly increase the firing range in comparison with existing weapons. Such modernization should seriously increase the strike potential of front-line aviation, but the problems of the early nineties did not allow for the full re-equipment of the Air Force. However, the difficulties of past years did not lead to a complete stop of work. Having joined Tactical Missile Weapons Corporation, Raduga GosMKB continues to work on new projects of air-to-surface guided missiles of the X-59 family.