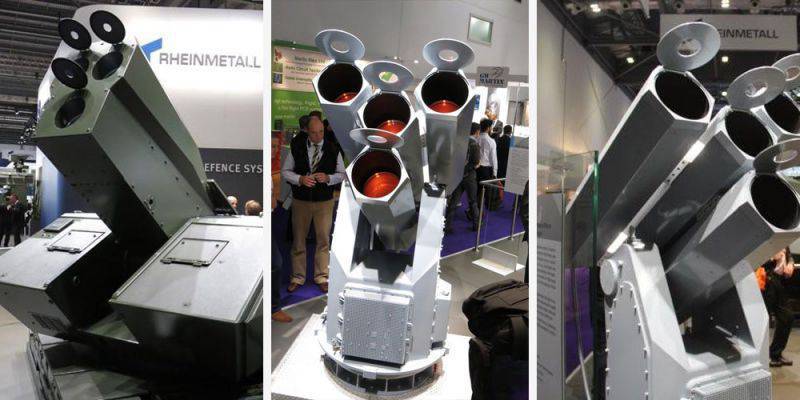 Drones - the headache of our time. They are more and more, and they have become a big problem for the armed forces around the world. They (UAV, UAV) are small, cheap, difficult to detect, difficult to knock down (and it is expensive to shoot down).

They are used by armies and PMCs, terrorist groups (Hezbollah and Hamas), the Ukrainian Armed Forces, the separatists, and simply private owners (or teapots).

The threat posed by drones is not limited to the Middle East or Ukraine.

And there was a whole bunch of them. Tired of catching the South Korean security officers ...

Drones are everywhere: above the positions of the DNR / LC militia forces, over the Crimea, over the naval ships, over the stadiums ... and, possibly, over your backyard plot or near the window of your apartment on the 25 floor (or on 1 m). Watch and dirty, dirty and watch, or write what you do there.

And this is not the first "application" of RDE for a total clearing of the sky from these annoying robotic bugs. 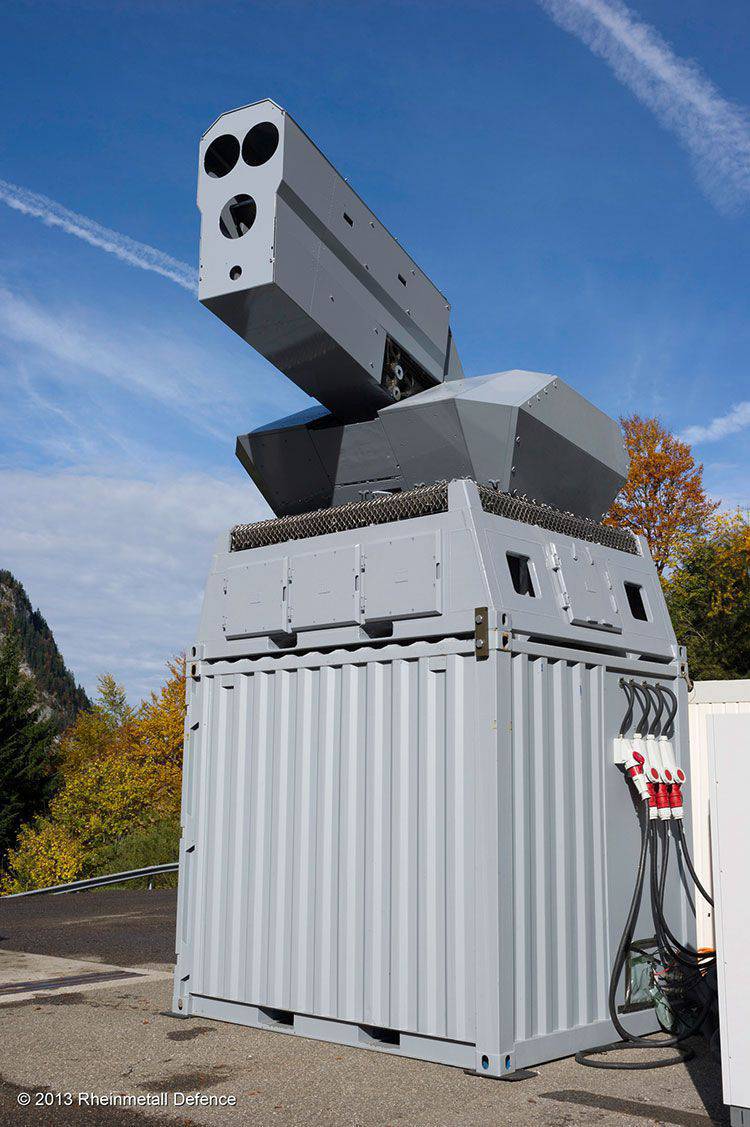 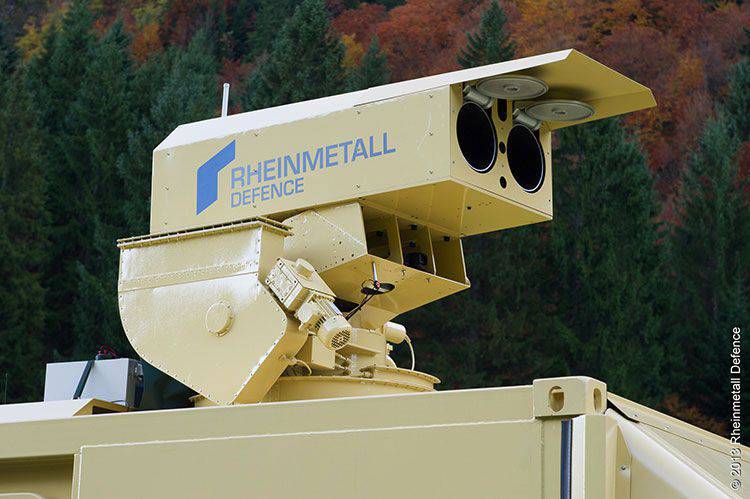 The test results were as follows.

GTK Boxer (but with the 20kW installation) can destroy an oversized heavy machine gun on a pick-up platform, hitting the ammunition of the cartridge belt with a beam. The "terrorist" -counter remains alive, the BC burns down with the likelihood of damage to the feed mechanism. 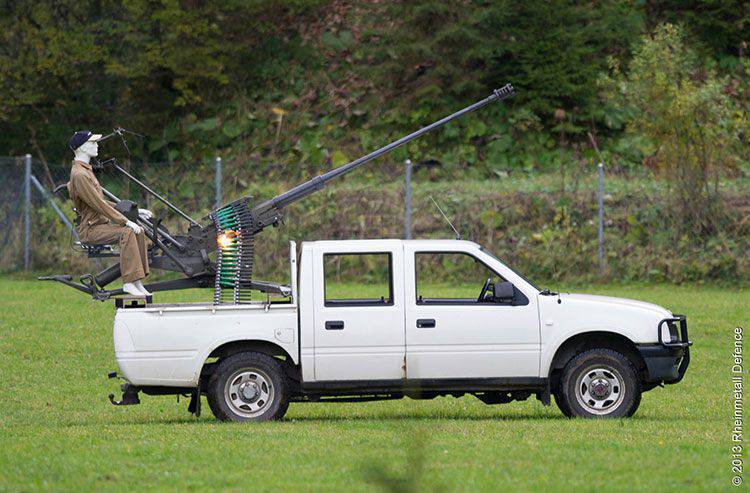 At a distance of 70 m, the crew detected mines and improvised explosive devices, irradiating them with a laser from a safe distance, which caused them to burn for a few seconds.

Also with 70 meters successfully cleared an obstacle from a barbed wire.
At distances up to 2000, the radar power supply cables, power sources, the radar mast itself were cut and cut, and the optics were damaged.

Skyshield HEL with a power of 30 kW (demonstrator) destroyed a 82-mm mortar shell at a distance of up to 1000 meters. The chance of hitting 5 from 5 in the first shot and 4 from 5 in the subsequent ones.

There were also successful interceptions of UAVs at distances up to 500 m.

What is the "novelty"?

Germany's Got a 4-Barrel Laser Gatling Gun is a four-barreled Gatling laser machine gun from Germany.

The system, according to informed Chinese sources, has not one, but four high-energy lasers (HEL) mounted on a turret or turret, which makes it look like a Gatling gun. And the "similar" only in appearance, but not at all in meaning.

The four 20-kW HEL lasers are designed for firing simultaneously using a technique known as spatial overlay technique. All beams of mono-power in 20 kilowatts are radiated simultaneously and converge on the target into one spot (of the same diameter as the 20-kW laser) with an 80 kilowatt power, naturally, minus the loss of photon motion in the medium.

According to the company's press release, when using spatial overlay, any amount of energy can be focused on the attacked target - you just need to add the NECESSARY number of lasers.

The lens of each ruby ​​red laser is protected by a special coating that prevents the rays from scattering due to fog, rain or water drops.

A new gun hit a demonstration drone at a distance of 500 meters. Also, lasers (as already mentioned above) can undermine ammunition, detonate artillery shells in flight, dazzle the sensors of other ships and even burn holes in the hulls of light watercraft.

I don’t even dare to judge who was the first who “invented” the Gatling laser machine gun.

"The six-legged automatic non-targeted laser fire system, otherwise - the fan laser design of the famous Martizen, in common parlance - "sawmill"... Six trunks were assembled in a package on a rotating axis. Each trunk was slightly deflected to the side. ”

2. Patrick Priebe (Patrick Pribe) is a German fan of laser weapons who, in 2013, built the Gatling Gun miracle Yodo concept to prove the correctness of the “Laser Gatling Laser” concept. 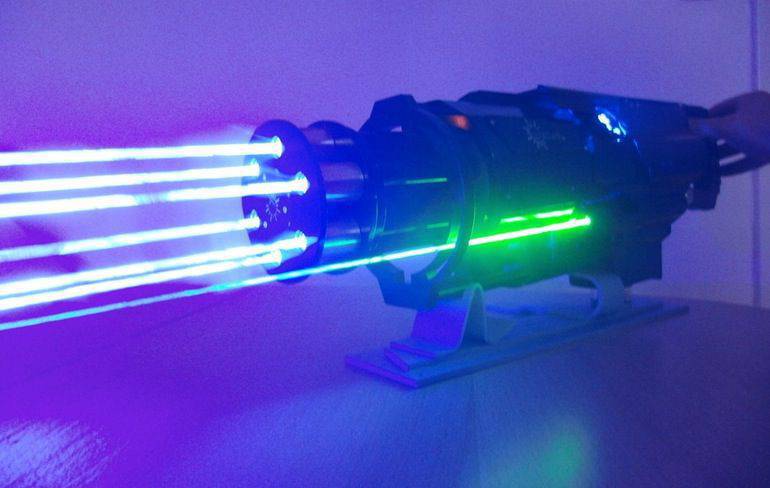 An interesting and cheap thing by the way.

The base of a seemingly personal weapon is made of aluminum, mounted on it is a rotating turret with 6 blue fourth-class 1,4-watt lasers from Spyder 3 Krypton (for $ 999.95 per piece). 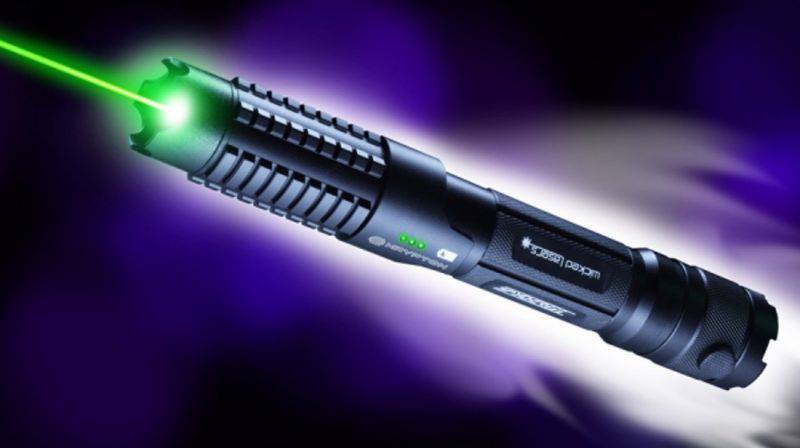 Plus a 100-mW green laser mounted on the side to aid in aiming.


Balloons are destroyed with a bang ... unless, of course, the turret does not rotate too quickly.

The speed of rotation of the turret can be controlled using the knob on the bottom of the "laser meter".

Cheap and cheerful: four ball bearings provide axial fixation and smooth rotation of the turret, the engine and the aiming laser are powered by eight AA batteries, and six blue lasers receive energy from four parallel lithium-ion batteries with a capacity of 18650 mAh.

Patrick, by the way, was previously famous for such creations as Iron Man Gauntlet and Plasma Cutter. 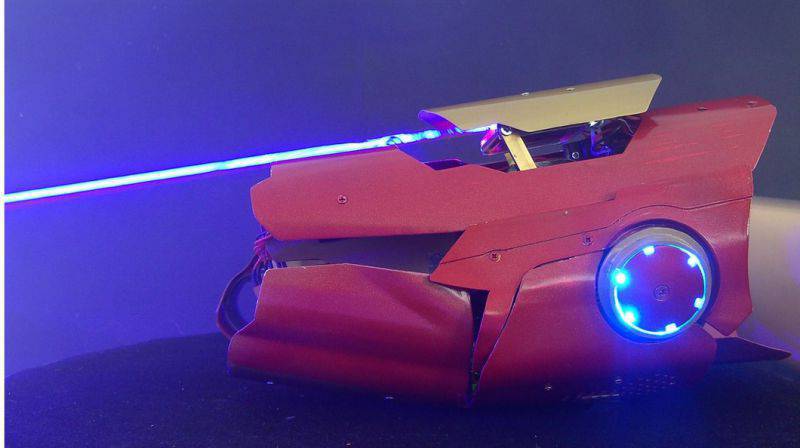 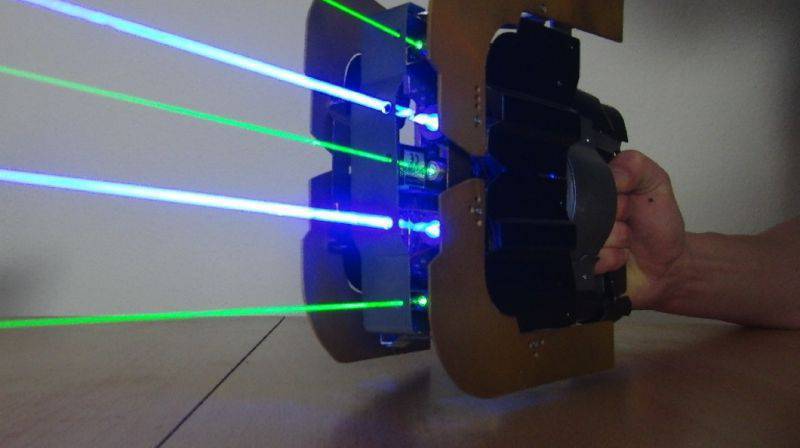 Well? We are waiting for the appearance of cheap compact and, most importantly, all-weather free electron lasers (Free Electron Laser, FEL) and capacious energy sources such as Nano Flow Cell (flow battery of liters on 30)? 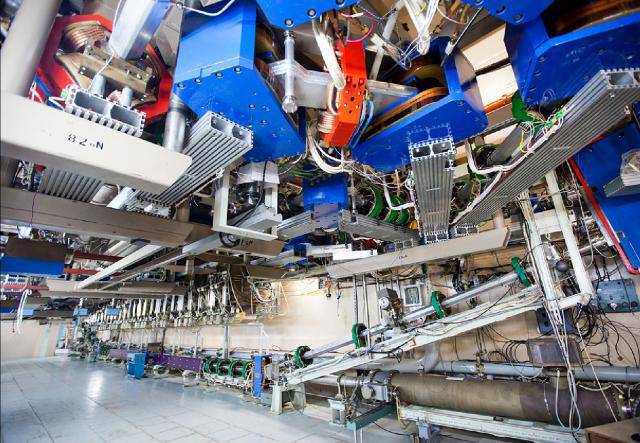 Indeed, unlike gas, liquid or solid-state lasers, where electrons are excited in bound atomic or molecular states, at FEL the source of radiation is an electron beam in vacuum passing through a series of magnets arranged in a special way - an undulator (wiggler), causing the beam to move along a sinusoidal trajectory by losing energy, which is converted into a stream of photons.

FEL have a wide range of radiation frequency variation (without changing the working medium), which allows you to adjust to the characteristics of the external environment (clear, overcast, fog, rain) and without any adaptive lenses.

"Convoy" - a civilian weapon of self-defense. “The Convoy was a low power laser gun. The shot from it brought only a painful, but shallow burn that allows you to stop the enemy. The fact that the gun had a decent energy reserve and a high rate of fire was not delicately taken into account by the law. In the automatic fire mode, a series of laser pulses burned a person through two seconds. ”

Luchevik "Career". "The old woman, engaged in a rather unusual thing: dismantling the ancient sunshine" Career ", put down their weapons."

Ctrl Enter
Noticed a mistake Highlight text and press. Ctrl + Enter
We are
Developments in the field of small-sized UAVs with vertical takeoff"Private traders" in space
22 comments
Information
Dear reader, to leave comments on the publication, you must to register.