October 1 2015
7
In the seventies of the last century, the Soviet defense industry began to develop several new projects of air-to-surface guided missiles. Over the next years it was planned to create several types of new weapons, differing from each other in guidance systems, characteristics and purpose. Thus, the development of a promising medium-range missile was carried out as part of the X-59 project.


Designing a new medium-range air-to-surface missile with a television homing head was entrusted to Raduga GosMKB. A.Ya. was appointed Chief Designer. Bereznyak. Subsequently, the project management was transferred to I.S. Seleznev. The terms of reference included the development of a guided missile with a range of up to 35-40 km, a television homing head and a high-explosive fragmentation warhead. The prospective ammunition was planned to be used as armament by fighter-bombers and front-line bombers, designed to destroy small-sized targets with known coordinates.

Project X-59 "Gadfly" was launched in 1972 year. Initially it was supposed to use ideas and solutions in the most active way, as well as ready-made components of existing missiles. In fact, it was proposed to make a "hybrid" of X-29T and X-58 missiles. Such a product was supposed to be a X-58 rocket with a television guidance system from X-29T. This approach allowed us to simplify the development of new weapons, as well as to fulfill all customer requirements. However, such an original idea was quickly abandoned. It took time to search for a target using a television homing head, and the X-58 rocket had too high speed to complete all the necessary operations in a timely manner. For this reason, it was decided to create a completely new project. 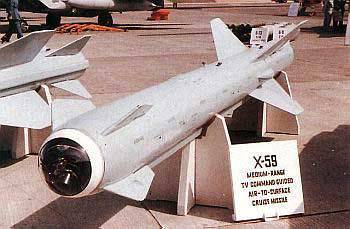 The result of further design work was the emergence of a completely new rocket, in the design of which, however, some existing assemblies and units were used. As a result, in its design, the new X-59 rocket was noticeably different from the other two products that were being created at that time.

Rocket X-59 has a two-stage architecture and is built according to the “tailless” scheme. The product received a cylindrical body with a small protruding gargrot on the bottom surface. The case had a hemispherical head fairing and four X-shaped destabilizers located next to it. To reduce the size of the rocket in the transport position, destabilizers were made foldable. They consisted of two parts: rigidly fixed supports and movable consoles, during the start they were opened by turning forward. In the tail section of the hull, large swept wings with rudders were provided. The total length of the rocket was 5,37 m, case diameter - 380 mm. Wingspan - 1,26 m. Starting weight (taking into account the first stage) - 760 kg.

Product X-59 had a standard layout for such weapons. At the head of the case were placed control systems, including the homing head. Behind them placed the warhead, and the central part of the body was given under the solid-fuel engine. In this case, the hull tail fairing housed antennas for communication with the aircraft carrier and a set of other instrumentation of the control system. The starting engine was placed in a separate cylindrical body and was mounted in the tail section of the rocket.

To control the rocket during the flight used a set of various tools associated with the autopilot. The development of the telecommand control system was carried out by NPO Tekon (Lviv). The control systems consisted of television GOS, radio command equipment, autopilot and other equipment. Provided two main ways of targeting missiles at the target. Depending on the specifics of the combat mission, the crew of the carrier aircraft could use the X-59 rocket in an autonomous or autonomous navigation mode.

Autonomous method of targeting implied the use of known coordinates of the target. Before launching, this information was loaded into the autopilot, after which the missile was dropped. Typing speed and dropping the starting engine, the product X-59 established two-way communication with the carrier, after which it transmitted the image from the television homing head. The flight to the area where the target was located was carried out using an autopilot at a given altitude from 15 to 1000 m. During the flight, the video signal from the rocket's GOS was transmitted to the video command device of the pilot or navigator operator. Having noticed the target, the pilot was to impose an aiming mark on it and turn on automatic tracking. Next, the rocket independently guided the selected object.

Autonomous navigation mode proposed to use in the presence of landmarks, allowing to determine the approximate location of the rocket. In this case, the autopilot and the navigator simultaneously carried out the control of the rocket. The autopilot followed the preservation of the main flight parameters, while the navigator determined the course and independently made guidance to the selected target. Autonomous navigation mode could be applied only during the day and in clear weather with good visibility. In addition, for the effective accomplishment of the combat mission, large and extensive landmarks were required, allowing the navigator to bring the missile to the target. In their absence, the execution of the attack was difficult or impossible.

To equip the aircraft carrier rocket X-59, a special hanging container APK-8 was developed with a set of necessary equipment. The main elements of this system were two antenna units, directed forward and backward. Such a container made it possible to maintain communication with the rocket during sharp evolutions of the aircraft, as well as during a lap back. Directly for the suspension of rockets on a carrier was proposed aviation ejection device AKU-58-1.

Rocket X-59 received a solid fuel engine. Because of the need to use the tail section of the radio command equipment, the engine was placed in the central part of the body and equipped with two nozzles placed on the side of the rocket. Despite this non-standard engine placement, the rocket speed reached 1025 km / h. In addition, the requirement for flight range at the level of 35-40 km was met.

To destroy enemy ground targets, it was proposed to use a high-explosive-cumulative warhead weighing 148 kg. Such combat equipment made it possible with high efficiency to hit various targets, including those with quite serious protection.

Design work on the project “Gadfly” lasted until the mid-seventies. In 1975, the State Committee on Nuclear Safety Raduga and related organizations began testing new weapons. An experimental batch of guided missiles was manufactured, which were later used in tests. Flight tests of the X-59 product were conducted at the Akhtubinsk range. The test carrier was the Su-17М4 fighter-bomber.

The first stage of testing and fine-tuning the construction continued until the 1977 year. In the future, the new missile presented to the military and soon began state tests. The entire range of checks was performed only by 1984 year. The pace of work, among other things, was affected by the complexity of the new direction and the need for careful refinement of various special systems. Nevertheless, by the mid-eighties, the X-59 rocket showed all its positive qualities, and was also recommended for use.

At this point, the choice of the future carrier of promising missiles became relevant. During the tests, this weapon was used by Su-17М4 aircraft, because of which it was first proposed to arm them with fighter-bombers. However, it was soon decided to introduce the X-59 into the Su-24M front bomber armament complex. By this time, the serial construction of Su-17М4 fighter-bomber had reached the finish line, and their re-equipment was inappropriate. In addition, the crew of the new Su-24M bomber was accompanied by a navigator-weapon operator, who could fully carry out the task of missile guidance in all modes.

After all the work was completed, the X-59 “Gadfly” guided missile fully complied with the initial requirements of the customer. Product characteristics allowed to attack targets at ranges up to 40 km from the launch point. Rocket dumping was allowed at speeds from 600 to 1100 km / h and at altitudes from 20 m to 5 km. Television homing head provides high accuracy of hitting the target. The circular deviation was 2-3 m. Moreover, during the tests, it was repeatedly possible to hit the target with a deviation of no more than 1,5-2 m.

Soon after the completion of all tests, the X-59 product was adopted by the USSR Air Force. The authors of the project became laureates of the State Prize. Serial production of new guided missiles was deployed at the Smolensk Aviation Plant.

Exact information about the combat use of missiles "Gadfly" is not available. However, some sources mention the use of such weapons during the first war in Chechnya. According to available data, the specific mountain climate of the Caucasus did not allow to effectively solve the tasks. In conditions of constant fogs and precipitation, visibility left much to be desired, which is why television homing heads could not be used to search for targets. As a result, only four launches of X-59 missiles were carried out, after which they refused to use these weapons. It should be noted that there is some confusion in the information on the use of the Ovod missiles in Chechnya. Different sources speak both about the X-59 products of the basic modification, and about the later X-59M. However, as follows from the available information, these weapons were faced with weather problems and could not fully manifest themselves.

For some reason, the sole carrier of the X-59 guided missiles was the Su-24M bomber. The use of such weapons by aircraft of other types was simply not foreseen. This factor, as well as other features of the project, led to the fact that in the mid-eighties, the development of the new X-59M rocket began. As part of the next project, it was possible to eliminate some of the shortcomings, as well as significantly improve the characteristics and, as a result, the overall effectiveness of the rocket. The appearance of the X-59М rocket led to the cessation of mass production of the basic X-59.

The medium-range X-59 guided air-to-surface missile made it possible to significantly increase the strike power of domestic front-line aviation. Through the use of a number of new components, it was possible to ensure delivery of an 148-kilogram warhead to a distance of up to 40 km and hit the target with a TAC of no more than 2-3 m. that again should have led to an increase in the effectiveness of front-line aviation.