Project of the guided bomb KAB-500С

30 September 2015
11
The experience of military conflicts of the last decades perfectly demonstrates the fighting qualities and perspectives of guided bombs with guidance systems based on satellite navigation. Such weapon proved to be a convenient and effective means of destroying stationary targets, the coordinates of which are known in advance or can be established directly during a combat sortie. For certain reasons, the Russian defense industry began to create such guided bombs much later than foreign ones. Nevertheless, the work led to the emergence of advanced weapons, which is of great interest for both domestic and foreign military.


The existence of the first domestic project of a bomb with guidance from the signals of navigation satellites became known at the beginning of the last decade. In 2003, the GNPP Region (now part of the Tactical Missile Weapons Corporation or KTRV) at the MAKS exhibition for the first time demonstrated a prototype of the latest Russian-designed guided bomb. The new project, in accordance with existing rules, received the designation KAB-500S: “Adjustable aviation 500 kg caliber bomb, satellite guidance. ”

During the first demonstration, it was reported that prospective ammunition was being proposed for attacking control centers, warehouses, industrial enterprises, infrastructure facilities, etc. In addition, they talked about the possibility of using KAB-500С for the destruction of underground structures. The possibility of the destruction of ships and ships at the berths was also stipulated. Thus, the applied guidance system with the correction of the signals of navigation satellites, according to the statements of the developer, made it possible to attack various stationary targets with known coordinates.

It was reported that a promising aerial bomb could be used by existing and prospective domestic aircraft. The permissible dumping altitude was set in the range from 500 m to 10 km, the speed of the aircraft carrier during a dumping - from 550 to 1100 km / h. At the same time, the target was hit with a circular probable deviation of no more than 5-10 m.

The product KAB-500С received a complex-shaped body formed by several cylindrical and conical parts. Thus, the head fairing consists of two conical surfaces, and the central part of the body is made in the form of a cylinder. In the tail provides a slight narrowing. The total length of the bomb is 3 m, the maximum case diameter is 400 mm. To ensure the required aerodynamic characteristics of the bomb received a set of planes. On the head fairing X-shaped stabilizers are mounted, in the tail - wings with rudders. Wingspan - 750 mm.

Most of the body of the bomb is given for the placement of high-explosive concrete combat unit. With the total mass of the product at the level of 500 kg (according to other data, 560 kg), the warhead accounts for 380 kg. The warhead has a thick-walled body that provides penetration of target protection or penetration into the ground. The weight of the explosive warhead - 195 kg. The warhead is equipped with a contact fuse with three types of slowing down. Thus, a bomb can explode directly upon contact with a target or with some delay, after it penetrates inside the object.

The bomb KAB-500С received a new control system, the main element of which is the PSN-2001 navigation indicator receiver, developed in Compass ICD. This device is designed to receive signals from satellite navigation systems, process incoming information and issue data on the necessary amendments to the flight path of a bomb. Due to a number of features of the receiver, it was possible to ensure sufficiently high accuracy characteristics.

It was reported that the PSN-2001 product provides simultaneous 24 channel reception of navigation satellite signals. In this case, there are three modes of operation: reception of signals only from the GLONASS system, only GPS systems, or parallel reception of signals from both systems. Automatics of the receiver-indicator is able to independently choose the so-called. working constellation of the navigation system, processing all available satellite signals. In this case, the signals of one preselected system have a higher priority and are received first. The remaining channels are filled by satellite signals from another system.

To improve performance in real combat use conditions, the PSN-2001 receiver indicator has a number of other features. So, the reception of signals from satellites is carried out through two independent antenna inputs, which allows you to maintain a confident reception when maneuvering the aircraft carrier and after a reset. Provides automatic monitoring of signal integrity and other parameters. Also, automation is able to independently update the almanacs of GLONASS and GPS systems. All necessary information is recorded in non-volatile memory.

In the future, GNPP Region and MKB Compass planned to improve the characteristics of the new bomb at the expense of some innovations. The overall improvement of equipment, ensuring compatibility with new navigation systems, as well as a number of other ideas were cited as methods of increasing combat effectiveness.

Applied guidance equipment, according to available data, allowed to bring the circular deviation of the bomb to 5-10 m. Thus, KAB-500С can be used to destroy various, including small-sized, objects with constant and previously known coordinates. In addition, the effectiveness of the use of such weapons was further increased due to the implementation of the “dropped-forgotten” principle: the pilot of the carrier should not perform any operations after dropping a bomb and can continue the task, or return to base.

By the end of the last decade, the KAB-500С guided bomb project reached the testing stage. Despite the best efforts of the developers, at this stage the new project faced some difficulties. In September, 2012, in the domestic media, there were reports of the failure of the Ministry of Defense from bombs with guidance from navigation satellite signals. With reference to unnamed sources in the military department, several reasons for this decision were indicated at once.

One of the main reasons for the failure was the high cost of guided munitions. A new type of bomb costs about 3 million rubles, while the existing free-fall ones cost the military several times less. In addition, a potential customer had doubts about the real effectiveness of such weapons and financial investments in them. The analysis showed that the upgraded Su-24 or Tu-22М3 bombers with modern aiming and navigation complexes are quite capable of providing acceptable accuracy of bombing, even when using unguided weapons. 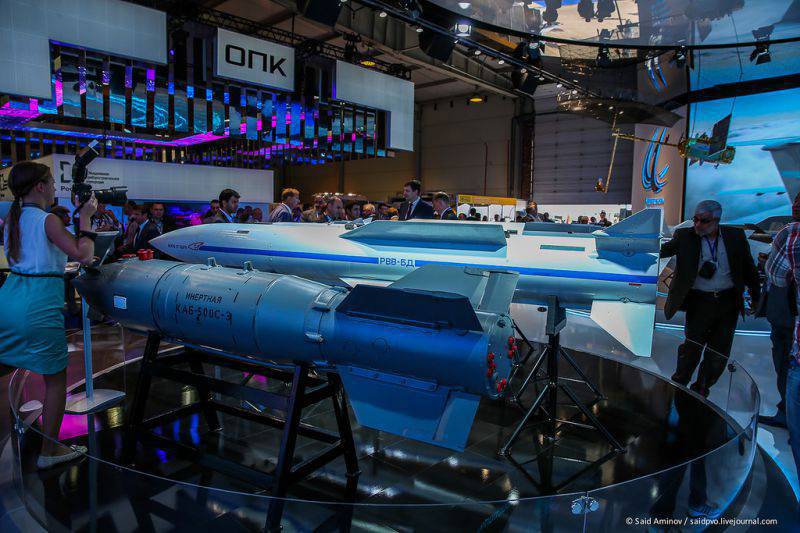 The layout of the export bomb KAB-500S-E at the exhibition MAKS-2015. Photo by Saidpvo.livejournal.com

Also unnamed sources in the Ministry of Defense spoke about some of the problems identified during the tests. It was reported that the Ministry of Defense began to check the new weapons in 2009 year, but over the next three years, the developer has not been able to fully comply with all customer requirements. Among other things, the military did not accept the bomb drop range. Despite the new guidance system, promising bombs should be dropped at a distance of about 6-8 km from the target. Thus, the aircraft carrier would have to enter the zone of the enemy air defense.

Soon after the appearance of information about the perspective guided bomb, the first information about its export version was published. Foreign customers planned to offer the product KAB-500-E, which is a slightly modified version of the basic design. Alteration in the export version entailed some deterioration in a number of characteristics. Despite this, the proposed ammunition is still of particular interest to customers.

While maintaining all the main features of the basic design, the bomb KAB-500C-E has a smaller range of discharge heights. Unlike the base CAB-500С, it can be dropped from heights no more than 5 km. The range of permissible speeds remained the same - 550-1100 km / h. Also slightly reduced accuracy rates. The circular deviation of the export bomb is within 7-12 m. The remaining characteristics and design features remain unchanged.

Back in 2012, the first information appeared on future foreign shipments of a new, adjustable bomb. Starting overseas customer KAB-500S-E was India. The first bombs were sent to the Indian military in 2013. Also appeared unconfirmed information about possible deliveries to China and other countries.

Due to certain circumstances, the guided bombs KAB-500С have not entered service with the air forces of Russia. However, the export version of such weapons interested some foreign countries and became the subject of supply contracts. Because of this, the first domestic draft of an adjustable bomb with guidance from navigation satellite signals can only be called successful partially. The defense industry failed to provide its army with new weapons, but promising bombs still replenished the arsenals of foreign countries.