23 September 2015
22
It seems that the Western, committed to the "unshakable" ideals of the European Union, the media decided to hold a tacit competition among themselves. The first part of the competition: each of the publications, each of the TV channels, online media should (should) explain to its readers (viewers, listeners) why Europe is experiencing the influx of North African and Middle Eastern refugees - explain so that, as they say, penetrate to the depths the soul. Part Two: to prove (it is possible by the method of the opposite, but at least with the use of mathematical induction) that the numerous refugees in the European Union are the real blessing for a democratic Europe. And often the competitive struggle results in such forms that the same arguments are used by different publications in diametrically opposite versions. Why are there different editions? Sometimes even one media can give such contradictory arguments that it is only amazing. And if you look at the European Union segment of social networks, then it is generally something ... 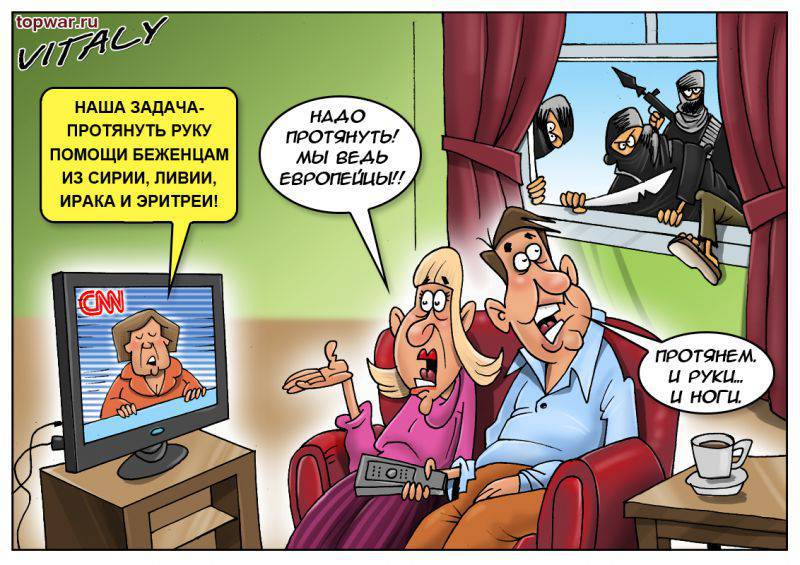 Comparing the assessments of the situation of dozens of euro-publications and eurogroups in social networks, the following trends can be identified (on the example of Germany):

At first, in the influx of refugees to the European Union, you understand, the “damned Russia”, which, as it turns out from the publications, literally “got” all adherents of European democracy with its “desire to spoil the progressive world.”

The "evidence-based" principle here is something like this: "Asad's ghoul drinks the blood of Syrian babies and all other citizens; the Syrian democratic opposition took up posters, and then (as it happened) democratic machine guns and even more democratic grenade launchers, gathered to rid Assad of the Motherland, but the ghouls from Moscow decided to support him, and therefore, having no moral strength to put up with Putin-Asad arbitrarily, millions of people rushed to seek help from us Europeans. ”

Secondly (sometimes in the same publications and groups), the influx of refugees is very good for the European Union, since the EU’s happiness is in diversity, and refugees are about to start working like oxen, adding tens of percent of German GDP growth.

But if we compare these two “theses”, then it turns out that the same Germans say: Russia does everything to bring happiness for a single EU territory - Germany ... Logic ... Or is it all the same attempts to show that “Happiness came to a halt” to Europe, despite the “intrigues of the Kremlin” with the influx of refugees? ..

German schoolchildren, who in recent years have been taught that there was a dictatorship in the GDR, and that the Germans of East Germany were oppressed by the regime built by “a bloodthirsty tyrant Stalin, who was not particularly different from Hitler,” now learn that Russia supports the “dictatorship” in Syria, and that is why poor and humiliated citizens are forced to ask for help from the bright European elves. The pedagogical environment of Germany, initially forced to support, so to speak, the “party policy”, now, by all appearances, is trying with all its might to believe that anyone and anything except the policy of the party itself is to blame for uncontrolled migration which dances not only Berlin, but all the other European capitals. People literally overreach to convince themselves that a thousand refugees is good, ten thousand are excellent, one hundred thousand is wonderful, and a million and more are generally manna from heaven, universal happiness ... And yet, convincing yourself, this little idea, forgive , trying to sniff and growing up euro-generation. Like, one Abdullah in the German class Markus and Dieter is not as good as one Marcus and one Dieter in the class with Abdullah and Mahmud ...

(I hope no one specifically from Markusov, Dieterov, Abdullah and Makhmudov, has not offended).

And this captures some amazing embodiment of the notorious theory of scientific communism, when they tried to prove to themselves that the victory of the communist ideology and form of social organization is inevitable. In the USSR, the quick victory of communism was postulated, in the European Union the public benefit from the influx of migrants was postulated. The themes are certainly different, but the approach is one ... It seems that in the near future there will be European (for example, British ...) “scientists” who will publish their printed work telling how the economy of the same Germany can grow significantly from year to year. a year, if it is "effectively" to involve refugees from Syria, Libya, Iraq and Eritrea ... - How happy the ethnic Germans will be who will see more and more people who make Germany more diverse in the streets of cities. “Do you believe in the benefit of hundreds of thousands of migrants who have broken through the Hungarian tear gas and Croatian minefields on the border with Serbia?” Believe, believe - here is a brochure for you, meet ”...

An interesting movie turns out: if the influx of refugees from Syria, Libya, Iraq, Eritrea, Somalia, etc. to Germany is BINGO for the European Union, according to the statements of most EU media loyal to the authorities, then why did the European Union do everything to cut off the wave of refugees from the territory of Ukraine? .. Huh? .. After all, Petr Poroshenko literally from every rostrum with a wide a smile on a broad face told that the association agreement was not just signed, but it also opens the door for Ukrainians who so long dreamed of merging in ecstasy with their European brothers - Germans, Austrians, Poles, British ... Do not worry, Peter Alekseevich, - required merge carefully, only, apparently, on the territory of Ukraine itself and with the “Young Europeanists” of Syrian, Iraqi and Somali origin ... By the way, Arseniy Petrovich should be more active in building his “European bank” - there is an opinion that it may well be useful for Russia ... Somehow I don’t want the infinite European “happiness” to spill over to our territory.

Ctrl Enter
Noticed a mistake Highlight text and press. Ctrl + Enter
We are
Refugees from Syria. Will Russia accept immigrants from the Middle East?What to do with the refugees? Eastern Europe to host thousands of Africans and Asians
22 comments
Information
Dear reader, to leave comments on the publication, you must to register.