24 September 2015
11
Michael Stürmer, ex-adviser to Helmut Kohl, believes that Europe has forgotten how to think. She also does not know how to act: neither by brute force, nor by international laws, nor by the efforts of the special services. As a result, the "helpless" European Union has nothing to respond to the "Russian threat." And Europe, unable to answer the Russians, thereby admits its weakness and inability to act adequately. 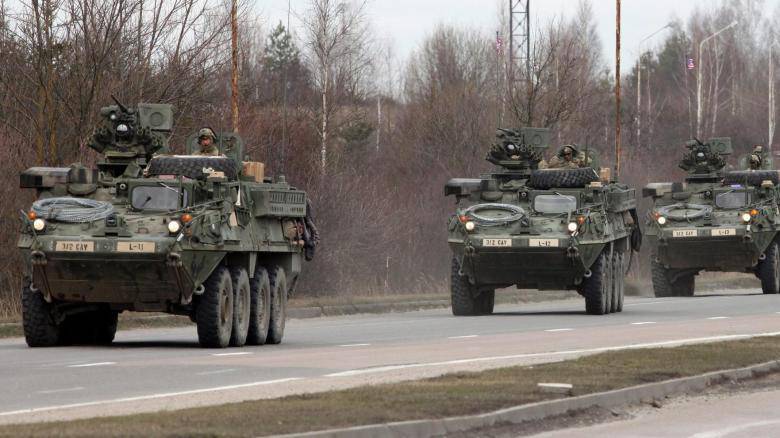 American armored vehicles in Poland on the way to the base in the German Vilseke. Photo: dpa

Europe sends an "undesirable" signal to Russia, writes in «Die Welt» Michael Stürmer. Europeans have forgotten how to protect their values, he said.

Sturmer advises not to forget about the old concept of “Moscow - the Third Rome”. The liberal democratic world order and everything that America stands for can be trampled upon. An ex-adviser gives Europe advice to learn to think globally and strategically. You can not postpone: you need to start thinking right now. And we need to think collectively, all together, otherwise Europe will soon soon turn into a kind of Hong Kong on the other side of Eurasia.

"The Europeans, who from the Renaissance and world discoveries established laws, during the long nuclear world (in Zeiten des langen nuklearen Friedens) have forgotten how to think in terms of balance and equalization, hegemony and spheres of influence and regulate their own security in the long term, not only with the help of international law and other unreliable measures, but also hard power, intelligence and domination in cyberspace. ”

Representative of the political class in Germany, the author of the article generally referred to the "impotent."

In such an unattractive behavior, Sturmer catches a signal for Russia, albeit unintentionally: Europe and the United States are demonstrating their inability to “reliably manage crisis”. Sturmer especially regrets the weakness of the United States: after all, they once did world politics ...

On the topic of the weakness of Europe argues not only Sturmer. Former French Prime Minister Jean-Pierre Raffarin (Le Huffington Post, source of translation - "InoSMI") also asked the question: "China and Russia are pushing Europe aside?"

“In the name of the values ​​of our foreign policy and European construction, we can no longer allow Russia alone to deal with the solution of the Ukrainian crisis. France entered into the negotiations to resolve the conflict in the framework of the "Norman Four". Nevertheless, this process was launched too late, ”the author believes.

In his opinion, France can no longer be allowed to go on its own, if she does not want to be left without strategic allies. Speaking with Moscow, Paris should defend its strategic position.

Apparently, earlier in Paris it worked, but now it does not: “Today the issue of rapprochement between Russia and China is inextricably linked with the independence of European politics, the self-consciousness of Europe and the leadership role that France should play. Initiatives should be taken not only by political leadership, but also by representatives of civil society. France was able to do this under Francois Mitterand, Jacques Chirac and Nicolas Sarkozy, uniting with other European countries, with which it is necessary to reckon with this crucial issue. ”

Thus, in the same way as Stürmer reproaches the whole of Europe and, separately, Germany, in “impotence”, Jean-Pierre Raffarin (only in more reserved terms) scolds Europe and France.

What do Russian experts think on this topic? Is Europe able to make independent decisions?

“The most rational and practically feasible idea is the creation of the European Armed Forces,” said "Free Press" political scientist and ch. Editor of Geopolitics, Leonid Savin. “But since the main lobbyists in the EU represent American interests, for the time being this project is unlikely to be implemented. Most likely, the countries of the NATO bloc will follow a tough policy that Washington imposes on Brussels. That is, they will place and increase the American contingents and allocate their funds for contracts to American companies that are engaged in the military-industrial complex. America is thus trying to solve some of its problems at the expense of its European partners. ”

Europe is not able to play an independent political role: “It cannot as a single political unit. If some states of Europe pursued a policy that meets their national sovereign interests, there would be more sense. I recall Krylov's fable about the swan, cancer and pike, where everyone tries to defend their interests within a single whole, but no one succeeds. It is not by chance that American political scientists call the European Union small power - small power. This reflects the realities that are taking place in the EU. ”

Strictly speaking, we note, the expert went away from the topic. Mr. Stürmer did not advocate for the independence of Europe or the European Union at all. On the contrary, he regretted in his article that the USA had become weak, but in fact they once had organized the liberal-democratic world order. The message of Sturner’s material is that Europe’s inability to “securely manage crisis management” is combined with the US political crisis: if Washington could, Europe would have someone to follow, and Germany would overcome its “impotence.” No wonder Sturmer particularly regrets the current weakness of the United States.

Director of the Institute for Problems of Globalization and Social Movements Boris Kagarlitsky believes that articles like Sturmer’s material are aimed at increasing military spending: “At first, experts say that everything is terrible, that control is lost, no one is ready for anything, and so on, but it ends that one should continue to do the same as now, but allocate threefold to five more money for this. ” And it does not matter, "what is really happening." According to the expert, in the near future, "we can expect a buildup of military budgets and increased pressure from Berlin and Brussels on their partners."

“The Germans say,” the expert told Free Press, “they cannot rely on America, but that does not mean that they want to change their policy. No, they are planning to do the same, but as if on their own, which means that more money should be allocated for this. ”

Thus, we note, the question has come down to money: the former adviser allegedly acts as a petitioner, and in Europe’s policy, as in US policy, nothing will change.

We do not think that the issue is exclusively in money, especially since the German Chancellor solves money issues surprisingly quickly (an example is the allocation of billions of dollars to refugees from Syria, Iraq and others arriving in the Federal Republic of Germany). The question is rather the backlog of political elites of the EU, Germany and the same France (with its unpopular president, against whose background even Sarkozy earned political points) from global changes shaking the world. It can be said that Europe and the United States missed Russia - and this was a shock for presidents and chancellors.

Observed and commented on Oleg Chuvakin
- especially for topwar.ru
Ctrl Enter
Noticed a mistake Highlight text and press. Ctrl + Enter
We are
Armored vehicles of Yugoslavia. Part of 6. Wars in the ruins. Bosnia and Herzegovina. Kosovo. MacedoniaArmored vehicles of Yugoslavia. Part of 5. Ruins Wars: Slovenia and Croatia
11 comments
Information
Dear reader, to leave comments on the publication, you must to register.