It is difficult to be a raw materials appendage 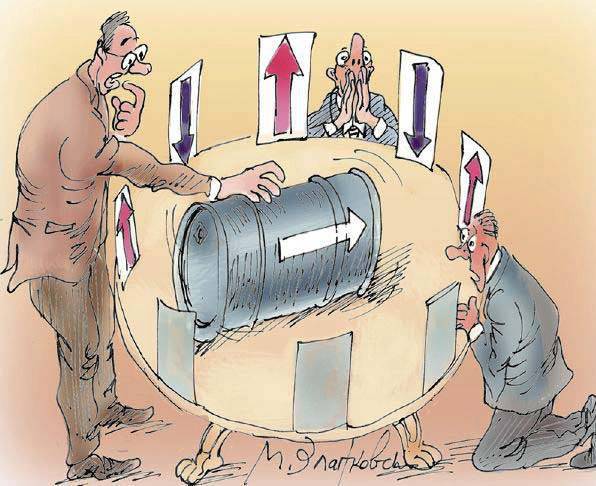 The article "RG" indicated that Russia's GDP in the 2016 year will grow only by 0,9% instead of the previously planned 1,8%. The reason for this will be low oil prices.

In fact, this forecast recognized the strong dependence of the Russian economy on trade in raw materials and on world prices for these raw materials. According to the forecast of the Ministry of Economic Development, the average cost of a barrel of oil in the fourth quarter of 2015 will be 38,7 dollars.

Why did Mr. Ulyukayev and his subordinates decide to revise the forecasts? Probably, they still took into account one well-known law from economic theory - the law of supply and demand. Having studied the market analytics, the experts clutched at their bright minds: after all, the world's oil supply almost tripled exceeds demand! And this is not to mention the fact that traders expect Iranian oil on the market as well.

September 21 appeared news from the "parallel" economic ministry - the Ministry of Finance. There, too, made a forecast.

The government is currently discussing a negative scenario of falling oil prices in 2016. According to this macro prediction, the price for a “barrel” of oil will be 30-35 dollars. It turns out that at September 11, Finance Minister Anton Siluanov, at a meeting with Dmitry Medvedev, suggested preparing a stress scenario for the 2016 forecast for the year based on these numbers. About it RBC told two senior government officials, whose names are not called.

At the same meeting, sources said, other assessments were voiced: Economy Minister Alexei Ulyukayev said that the negative scenario suggests a price not lower than 40 dollars per barrel, a representative of the Central Bank announced the forecast in 35 dollars per barrel. At the same meeting, the Prime Minister agreed on the need to develop a stress scenario based on $ 35-40 per barrel.

At the meeting with the Prime Minister, said the source "RBC", Siluanov called the two priorities of fiscal policy: it is to save by the end of 2018, the reserve fund of at least 2 trillion. rub. and reducing the budget deficit by 1 pp GDP per year. Priorities have changed: the reserve fund is supposed not to touch. But where to get the money? The Ministry of Finance proposed to take them from the oil industry. “The fiscal rule that prevented this from happening (reserves would have to be spent first) for 2016 will be canceled a year,” reminds RBC, “last week the government submitted a bill to the State Duma. It is proposed to change the formula for calculating the mineral extraction tax in favor of the state so that additional budget revenues in 2016 will be 609 billion rubles. ” Quote from "RBC":

“With the current tax calculation system, the state takes in the form of MET and export tax from 35% with low oil prices (below $ 40 per barrel) to 48% (above $ 110) revenue, follows from the materials of the Ministry of Finance. If the formula is adjusted, tax exemptions will be 45-47% of the revenue at any oil price. ”

The coming low price of oil (“not for long”) is predicted by other government officials.

Deputy Prime Minister Arkady Dvorkovich, noted "Arguments and Facts", allowed oil prices to drop to the 30-35 dollar per barrel. “The price may drop to 30-35 dollars per barrel for a short time. In the same way, it can grow to 100 dollars per barrel - the probability is the same. But, more likely, based on all the factors, the price of oil will remain in the range from 50 to 70 dollars per barrel and fluctuate within these limits, sometimes going for them if we talk about the next three years, "he said on the air of the TV channel" Russia 24.

It seems that now only those who think that the Russian economy and the trade in “black gold” do not have a relationship are not talking about oil.

The long life of Russia in the form of a “raw materials appendage” of the West has led to the fact that the budget is constantly being made up taking into account world oil prices. Oil becomes cheaper - the budget is thinning, oil becomes more expensive - there is a surplus in the budget, and money goes to the reserve fund.

It is not surprising that under current conditions, Minister Siluanov spoke of large government loans.

"Next year, we have a significant amount of borrowing provided for by the federal budget - 1 trillion rubles," the magazine quotes the minister. "Expert". The official also explained that retirement savings "just could be used as a source of investments in securities that will be issued by the government." According to him, "this is a reliable investment, it brings a good yield above inflation, somewhere plus 1,5-2%."

This was reported by Siluanov at the “Donguzsky” training ground in the Orenburg region, where a meeting of the military-industrial commission was held. The Minister noted that the final decision on pension savings in the 2016 year can be made before the end of September. These savings, in his opinion, “can bring to the budget of the next year up to 350 billion rubles,” which will prove to be “a good help for financing the budget deficit”.

It is also known about another statement by Siluanov, which he made a few days earlier, speaking in the State Duma.

The minister criticized the policy of creating financial reserves in previous years. In his opinion, deductions to reserves during times of high oil prices were insufficient. According to the official, this is one of the reasons for the current sharp fluctuations in the foreign exchange market.

“It is obvious that the amount of savings [in the Reserve Fund and the National Welfare Fund] is significantly lower than necessary, this amount of savings we can spend in a year or two. The less we sent funds to the Reserve Fund, the more it affected the strength of the ruble in the "fat years", this led to the economy becoming less competitive ", - quotes him "Lenta.ru".

The very policy of creating reserves was correct, the minister noted. It allows at the moment to pass the crisis years less painfully.

Further, Mr. Siluanov brought down criticism on those deputies that during the meeting negatively responded about Alexei Kudrin, who at one time defended the idea of ​​accumulating funds in the fund. “If we hadn’t done this, we would have had to cut federal budget spending and cut it alive in the current year,” Siluanov said.

In parallel, the crisis is baking the Russian “oil industry” itself.

Speaking at a conference on the development of the Arctic, the deputy director of the department of the Ministry of Energy, Alexander Yerkov, said that by 2025, the developers of the Russian shelf may face a shortage of about twenty floating drilling rigs. He described the task of eliminating the deficit as a “big challenge”, facing the domestic shipbuilding industry. He further noted reports RIA News"that while in Russia not a single floating drilling rig is being built.

Perhaps Russia will be saved by import substitution, which is so much talked about in the government? Experts doubt. At least in the short term, there is no need to wait for salvation.

The materials of the Ministry of Energy, which quotes "Independent newspaper"it is reported that by the year 2020, the shortage of spare parts for drilling platforms could be more than 150 thousand units per year. Analogs of foreign equipment in Russia are practically not produced, notes the Ministry of Energy. Example: on the Prirazlomnaya Arctic platform, the share of Russian equipment is less than 10%. And according to the data mentioned by Yerkov, in geological exploration on the shelf, the share of Russian equipment is now less than 1%! According to experts, it is impossible to organize full import substitution of offshore equipment in a reasonable time. In this regard, it is necessary to revise the plans for the development of the shelf and recognize the high probability of a significant drop in hydrocarbon production in Russia in the medium term.

And then there is the planned additional tax burden on the oil industry (see above).

Here, however, it will be useful to recall that the ruble in Russia was greatly devalued, which provided oilmen with comfortable business conditions. But because of the low price of oil, their tax rates have decreased. Good profit. At least, experts do not talk about losses. It turns out that the Ministry of Finance did not take its tax idea from the ceiling. On the other hand, we must wait for the crying of raw material top managers. There is a “third” side: oil companies will invest even less in the development of the industry, which in itself will lead to a reduction in hydrocarbon production. In addition, the sanctions deprived the oil industry of the opportunity to obtain favorable loans in the West.

"The tax burden of oil companies has really decreased due to the weakening of the ruble," said "Free Press" Dmitry Abzalov, President of the Center for Strategic Communications. - Oilmen receive revenues in dollars, and production is paid in rubles. However, I would not exaggerate the effect of “devaluation profit”. If only because the oilmen buy a significant part of the service equipment for the currency. Moreover, the overall situation of the industry has recently deteriorated: anti-Russian sanctions made it difficult for oil companies to access external financing, so they have to invest in their own funds for most projects. In this situation, of course, a lot of money does not happen. ”

However, the expert believes that the situation requires that oil revenues be invested in social obligations. If a social sphere "collapses in the country," the cabinet of ministers "will no longer be able to save the oil companies." In addition, the preservation of the Reserve Fund and the National Wealth Fund is also “the right priority”.

“That is why,” said the expert, “I believe that an increase in taxation in the oil industry will still occur. The only question is in what format it will be done. ”

While experts make gloomy predictions and guess at the coffee grounds, we will make a number of the most simple journalistic conclusions. They, too, will not be fun.

First, there is a strong dependence of the Russian economy on world oil prices. And this is the saddest fact. Old fact.

Secondly, there is another dependence: Russia, no matter how sad it may be to admit, has turned into a raw materials appendage of the West, and depends largely on this West itself. Import substitution is empty words for now. For many years the country was sitting on a barrel of oil, buying equipment and technologies “over the hill” and taking loans there. And now the time has come for sanctions, and instantly there were problems everywhere. They affect today; they will affect and in the future.

Thirdly, in the coming years, the government will resort to large loans in order to carry out “social projects” (the number has already been announced - a trillion rubles). The budget is likely to be “reduced” with a chronic deficit, as in Yeltsin's memorable years.

Fourthly, in the medium term, the crisis will hit the oil industry, which is still very little, but fills the budget. If sanctions continue in the coming years, the oil industry will suffer further due to equipment failure: there will be an acute shortage of foreign components.

As a result, a few years later, somewhere in the 2020 year, our half-blind government will finally make out those disadvantages of the trade-raw model of "development" of the economy, which Russian financial officials and oil and gas top managers continue to focus on today.

Ctrl Enter
Noticed a mistake Highlight text and press. Ctrl + Enter
We are
Results of the week. "It is a sin to laugh at sick people"Oil: how optimists were mistaken
304 comments
Information
Dear reader, to leave comments on the publication, you must to register.